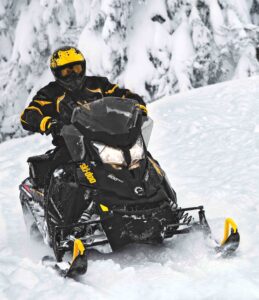 2014 Ski Doo Renegade Adrenaline snowmobile? My toughest choices at the end of any season is what sled to ride next winter. Ski-Doo doesn’t make choosing any easier by adding so many new technologies and innovations to their new line up every year. But I’ve been waiting for Ski-Doo to boost the horsepower on their ACE engine ever since I tried the ACE 600 when it first came out in 2011.

At that time, I got about 425 kilometres to a tank of gas on tour, my best ever. So there is a lot to like about that 4-stroke power plant, but topping out at about 105 kph was a little light for me. Not that I usually ride that fast, but I’ve always thought that running any engine near the top of its power band for a whole season at the number of kilometres I ride probably isn’t the wisest way to prolong its lifespan.

Enter the new ACE 900, with a claimed 50% power boost and 77% torque increase over the 600, while sacrificing only 18% of that engine’s unsurpassed fuel economy. What’s more, it runs on regular gas, quite a saving for me over the cost of using premium all winter!

As a Sea-Doo watercraft rider each summer, I’m already sold on the benefits of Intelligent Throttle Control (iTC) that’s paired with the ACE 900. This industry-first throttle-by-wire system makes working the lever easier and smoother. It also enables three different engine modes – Standard, Sport and ECO – at the touch of a button. On the water, the result is a variety of riding style choices, depending on the conditions and how the rider feels that day. Plus, I experience less hand and thumb fatigue over long distances on the water with iTC, and I expect the same on the snow.

So the ACE 900 is definitely on my radar as a must-have next winter, but what to put it in? I really liked the 2013 Ski-Doo Renegade X 600 HO ETEC that I rode this winter. As good as Ski-Doo’s rMotion suspension works in a short track sled, I think it excels in the Renegade’s 137” track. The combination of long track and rMotion delivers such a smooth ride that I didn’t even miss the Air Control Shock on my 2012 GSX Limited. Meanwhile, the XS platform provides the best out-of-the-box wind protection Ski-Doo has ever offered and its ergonomic angles make repositioning your body for corners easier than ever.

The 2014 Renegade Adrenalin is the only crossover model that gets the ACE 900, so given all of the above, that’s my choice of sled for next winter. Great gas mileage, plus not having to add oil get top marks on my touring scorecard, as does enough power to comfortably maintain my touring pace day after day for thousands of klicks. All with the benefits of the XS platform and rMotion suspension. Sounds like a dream ride to me!

Check out my first impression and end of season 900 ACE Reviews!