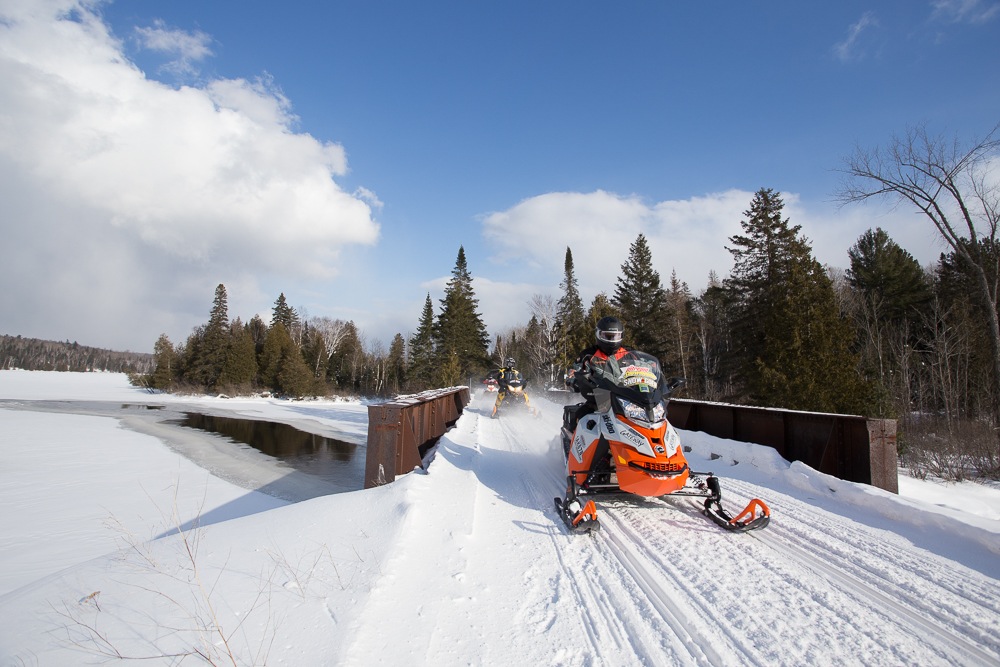 Notes: Toll free phone numbers are included only when they connect directly to the hotel (as opposed to an off site reservation system). TOP = Trans Ontario Provincial; Club Trail = CT. Trails or lodgings may change from the time of my tour; please reconfirm info by using the contacts provided before departing.

As one of the Snow Tours promoted by the Ontario Federation of Snowmobile Clubs (OFSC) this winter, the Bon Echo Loop runs south and east of Bancroft to the Mazinaw area of Ontario’s Highlands Tourism Region. We rode this 232-kilometre tour clockwise out of Bancroft, racking up a total of 257 kilometres (including a total of 25 kilometres between Bancroft and the official loop route). I recommend doing the Bon Echo Loop clockwise from Bancroft because that puts the last 50 kilometres or so at the end of the day on TOP Trail E106 & TOP B106E (Hastings Heritage Trail), so if you’re running late or tired, it’s very easy going back to the Bancroft Inn & Suites. Loop fuel is available in McArthur Mills, Denbigh, Cloyne and Glimour.

Starting about 40 kilometres north of Bancroft, the Madawaska Highlands Loop is listed officially at about 180 kilometres and includes (counter clockwise) Lake St Peter, Combermere, Barry’s Bay and Whitney. Our door-to-door ride of this loop from the Bancroft Inn & Suites racked up 290 kilometres total. After completing the loop itself, we decided not to ride back to Bancroft on TOP B106E (Hastings Heritage Trail) and instead added some extra distance by dropping into town on Club Trails 178 & 179. TOP B from Barry’s Bay to Whitney is a scenic rail trail along the Madawaska River. Be sure to catch two panoramic lookouts on route – one just off TOP E109 south of Barry’s Bay and the other on Club Trail 159 south of TOP B west of Barry’s Bay. Loop fuel is available at Lake St Peter, Combermere, Barry’s Bay, Madawaska and Whitney.

“Southwestern Loops” is a name I made up to describe this day’s ride, because we headed south and west from Bancroft and there are two unofficial and one official loop options. Depending on your time, you can ride 150 (unofficial) kilometres as we did to Tory Hill and Wilberforce (fuel), then back up toward Lake St Peter (fuel) on TOP E109. Or you can ride a longer unofficial loop into the Haliburton area and then up TOP E to Whitney (fuel) and south to Bancroft. But if you want to ride another good promoted OFSC loop that’s as official as it gets, check out the Hastings Highland Tour, a 240-kilometre ride south from Bancroft that we unfortunately didn’t have time to do.