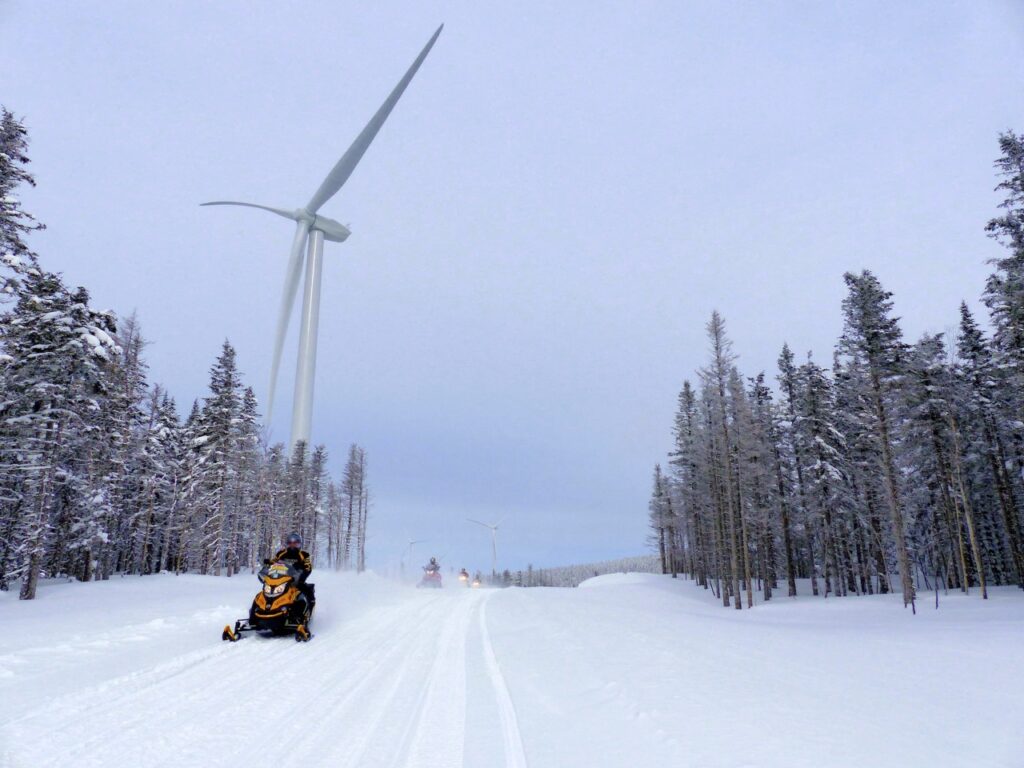 What’s not to like about the snowmobile New Brunswick Northern Odyssey? Under startling blue skies, I remember thinking:“Snowmobiling doesn’t get any better than this!” Endless miles of wide, rolling white carpets made for exhilarating and effortless riding.

As these sweeping trails carved through snow covered mountains, majestic wind turbine blades revolved in slow motion on nearby hilltops, as if blowing the heavens clear of clouds for this picture-perfect day. Hard to believe that something this remarkable could go on day after day!

About The New Brunswick Northern Odyssey 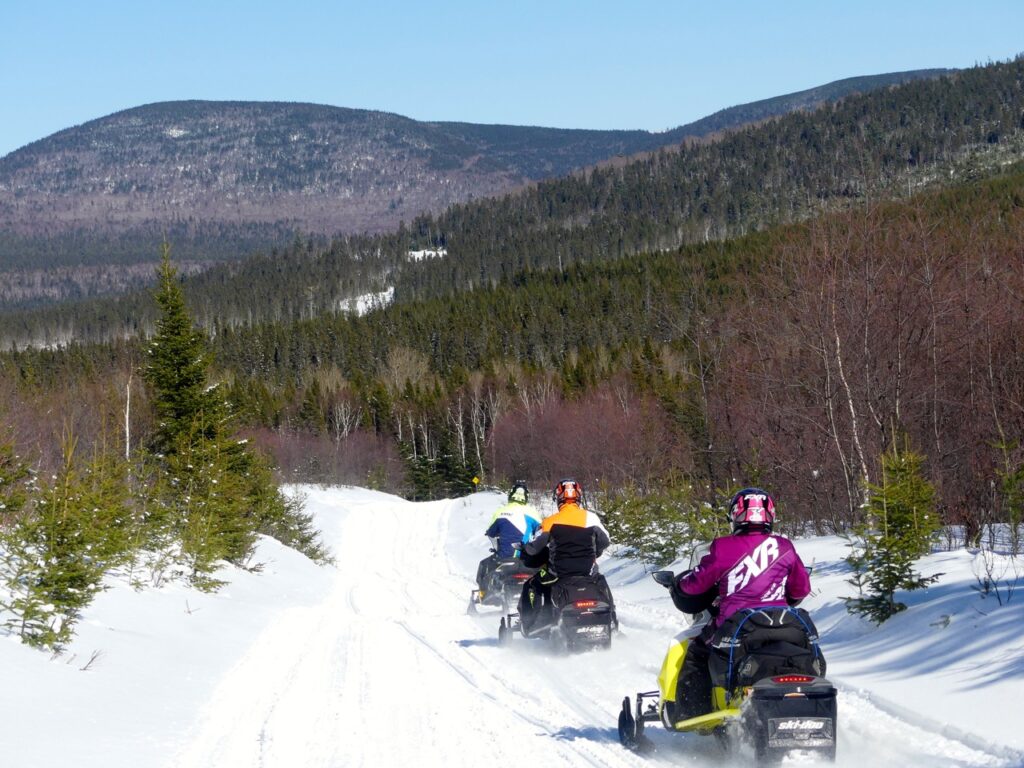 One of my favourite rides is known as the “Northern Odyssey”. It’s the premier tour loop in the Province of New Brunswick, and it delivers the goods, especially for “been-there-done-that” snowmobilers in search of new adventures.

Northern New Brunswick is bounded to the west by Maine, to the north by Quebec and to the east by Nova Scotia. Area terrain is part of the Appalachian Mountain range, so it’s typically blessed with the most snow in the Maritimes. Here, many miles of local and connector trails intersperse with over 1,000 miles (1,600 km) of trans-provincial trails – more than enough to keep riders grinning from ear to ear.

In part, that’s because the snowmobile season in northern New Brunswick often starts before Christmas and extends well into April. What’s more, hundreds of old logging roads crisscross the region, which includes the Miramichi Highlands, Chaleur Uplands, the Notre Dame Mountains and the Christmas Mountains.

Getting Around Northern New Brunswick

Many of these man-made corridors are groomed as part of Snowmobile-Motoneige New Brunswick‘s maintained trail system. Others are simply available for riders to explore off the beaten track. 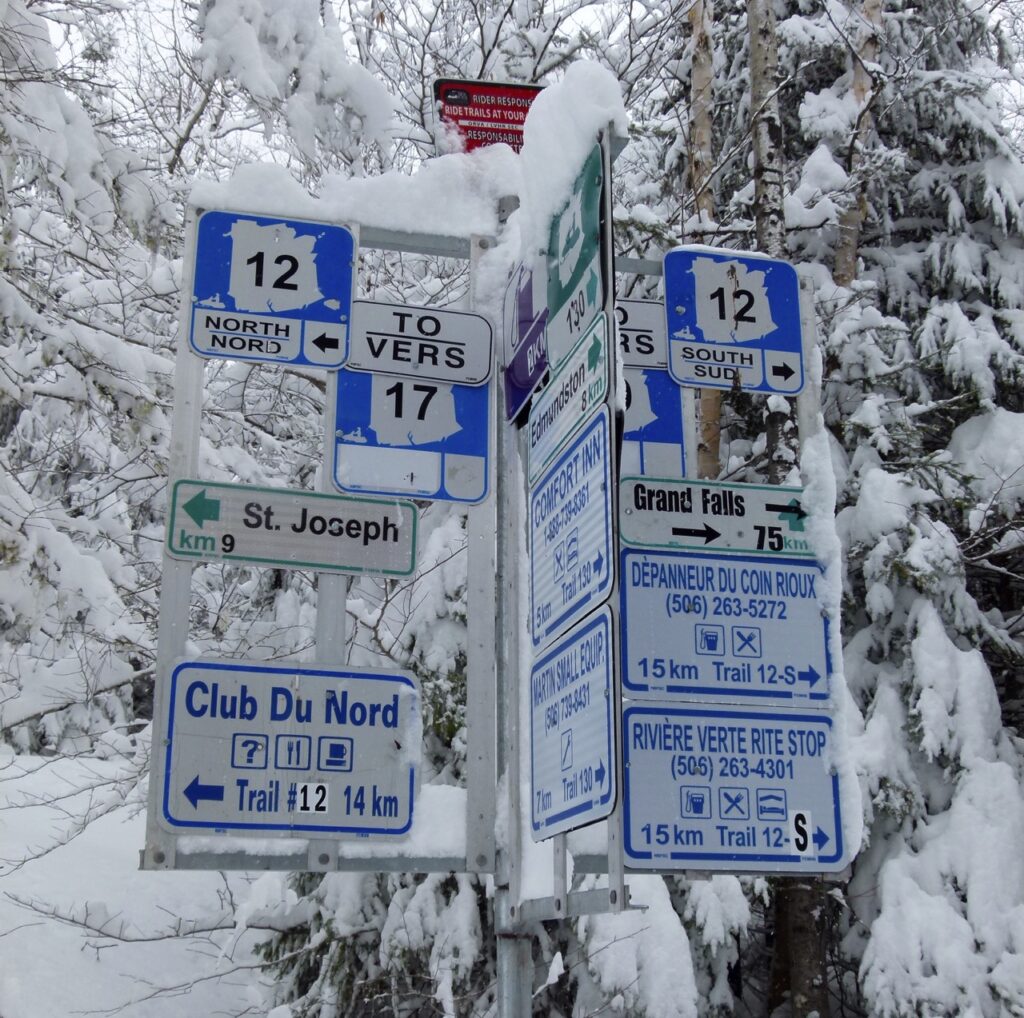 Trail navigation is good. On trail maps and signs, blue and 2-digit numbers denote provincial trails. Local and connector trails are green marked with three digits. All of this makes for generally excellent riding and it’s easy getting from one place to another.

Speaking of trail signs, New Brunswick has the best trail signage system I’ve seen. Most junctions are marked with a sturdy metal pole that has multiple wings: One wing pointing in the direction of each intersecting trail (see photo).

For example, if it’s a “T” intersection, there will be three wings, one for each trail direction, so riders know exactly what trail each one is and where it goes. What’s more, each wing has the trail numbers at the top, followed below by the next town name(s) and then the nearest services underneath all of that. Thus, most major intersection signs across the province are consistent in appearance. Plus, the poles stand high and secure enough so as not to get buried in snow. 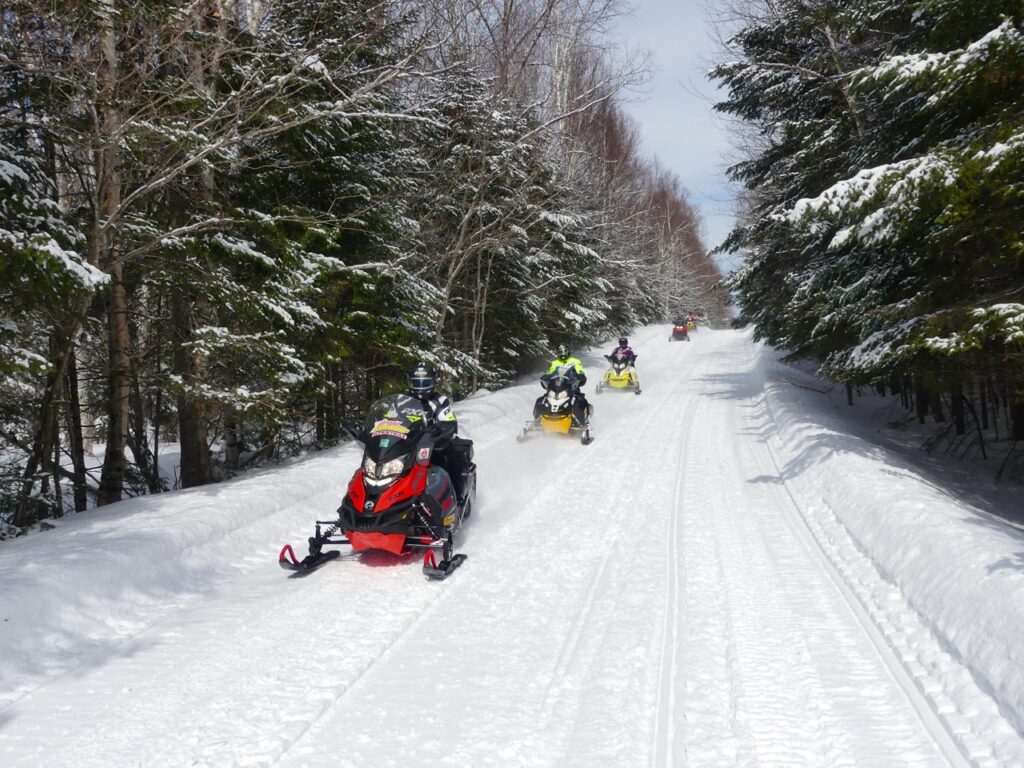 One sign was conspicuous by its absence. There was no posted provincial speed limit. That’s because there isn’t one for snowmobiles on most trails, except for slow zones posted by some municipalities.

Before you get all excited about the prospect of no speed limit, please note that if you ride like an idiot in New Brunswick, you can be charged with dangerous driving and that’s more serious than a speeding ticket. But it sure is nice not to have to be constantly trying to stay within an arbitrarily set limit!

With so many outstanding trail choices, it’s hard to know where to get started and even tougher to know when to quit. Best of all, most of their trails either avoid water crossings or are bridged, so spring riding in the northern New Brunswick interior continues even when ice goes bad elsewhere.

Getting To Northern New Brunswick

We accessed the Northern Odyssey at its northwest gateway, the City of Edmundston (pop.16,580), located just south of the provincial boundary with Quebec. Snowmobilers coming to New Brunswick through Maine or Quebec need to be aware that thanks to a zone change to Eastern Standard Time, you lose an hour crossing into this province (but regain it going back), so plan accordingly.

Edmundston is a western anchor community for the Northern Odyssey, along with Grand Falls (pop. 5,326) about an hour south via New Brunswick Trail 12. Both communities are located adjacent to the State of Maine along the international border. For our staging hotel, we chose the Best Western Plus Edmundston (see Where We Stayed). 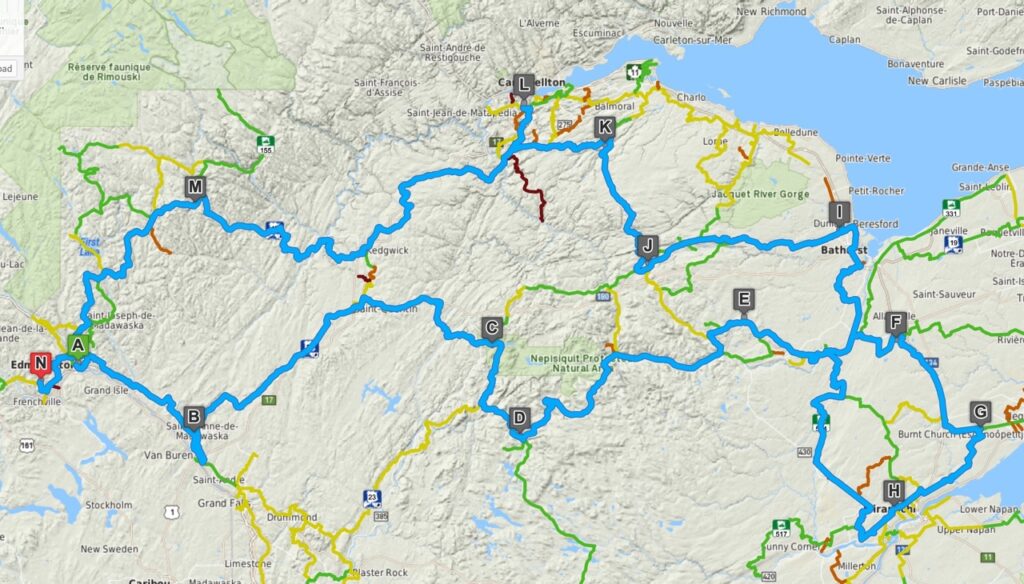 Our plan was to ride a 4-day Northern Odyssey loop through the wilderness interior to visit the towns of Miramichi (pop. 17,537), Bathurst (pop. 12,275) and Campbellton (pop. 6,883) on New Brunswick’s east coast (see map). Each of these communities has trail accessible accommodations, but another option is to stay at outfitter-style lodges in the interior like we did on our night at Rogers Lake Lodge. Tips: Popular outfitters have limited lodgings, so book in advance, especially in peak season and on weekends. Also, payment for fuel at these locations is often by cash, so carry enough money with you!

Our eastbound route on Trails 19 and 23 went through Saint-Quentin and passed the province’s highest peak, Mt. Carleton (2,690’), on the so-called Candy Cane Trail. Meanwhile, we returned by the parallel, but more northerly Trail 17 through Kedgwick. In all, we racked up almost 750 miles, but there’s so much more riding we could have done!

Snowmobile Bridge On Trail 19 at Bathurst – Photo by Al Fletcher

Those with more time could ride south from Serpentine Lake Lodge around the Christmas Mountains on Trail 58 into Miramichi. Or take a day to explore eastward from Miramichi or Bathurst into the historic Acadian Peninsula. It’s worth noting that New Brunswick is arguably Canada’s most bilingual province, so communication is no problem regardless of your language preference, English or French.

Depending on where you’re coming from, another viable option to extend your riding distance is to snowmobile into New Brunswick from Maine (easiest crossing at Houlton) or from Quebec on connecting trails like Trans Quebec 85.

There are also backcountry riding opportunities on the outbound leg of the Northern Odyssey around Serpentine Lake Lodge (food, fuel & lodging) just west of the intersection of Trails 23 and 58 (follow the “Dasher Trail”). Also, around Rogers Lake Lodge where we stayed on our second night. 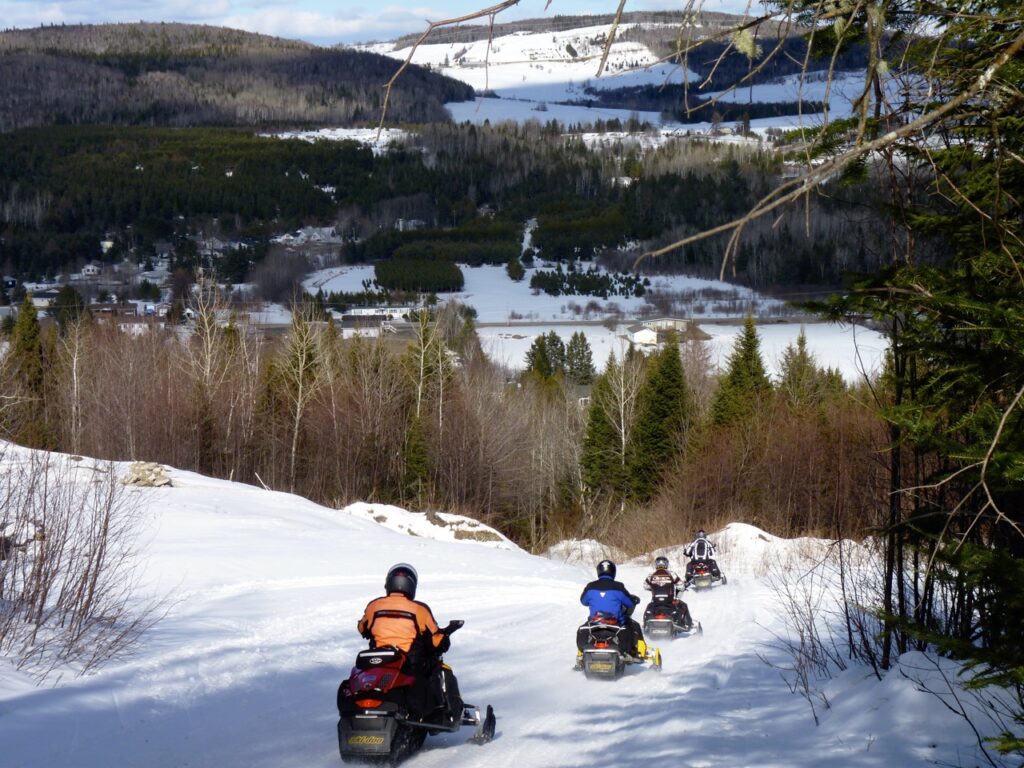 Northern New Brunswick is an especially picturesque area, with many panoramic views and stunning vistas where we could see for miles over multitudes of hills and valleys. Impressive scenery on this tour includes between Edmundston and Moose Valley on Trails 12 & 17; the Atkinson Tower on Trail 135 north of Moose Valley; the Tower Road windmills on Trail 503 between Popple Depot and Island Lake; and Squaw Cap Mountain, the second highest peak in New Brunswick (1,585’), on Trail 236 just west of Campbellton.

Northern New Brunswick has long been a snow magnet for riders from the New England states, Ontario and Quebec. They can be on these trails after trailering no greater distance than they would to other getaway destinations. So be sure to consider the New Brunswick Northern Odyssey ride for your next snowmobiling adventure! 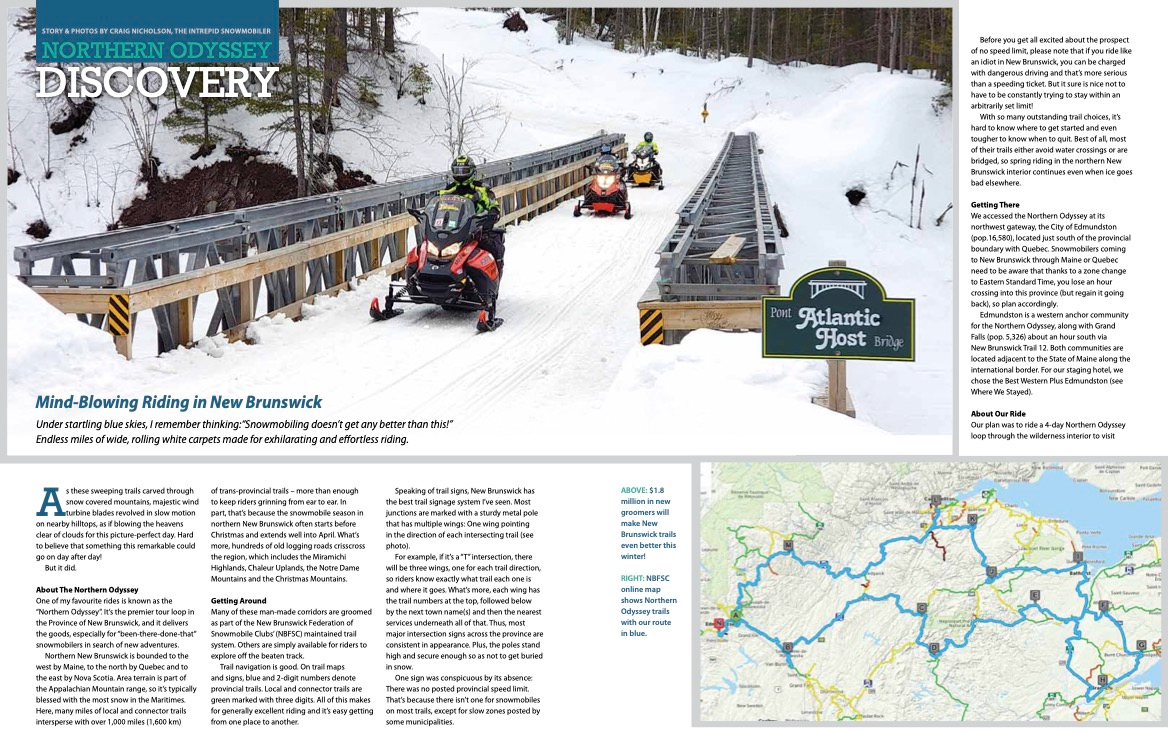 Click on image above to view my story as published in Supertrax International Magazine.