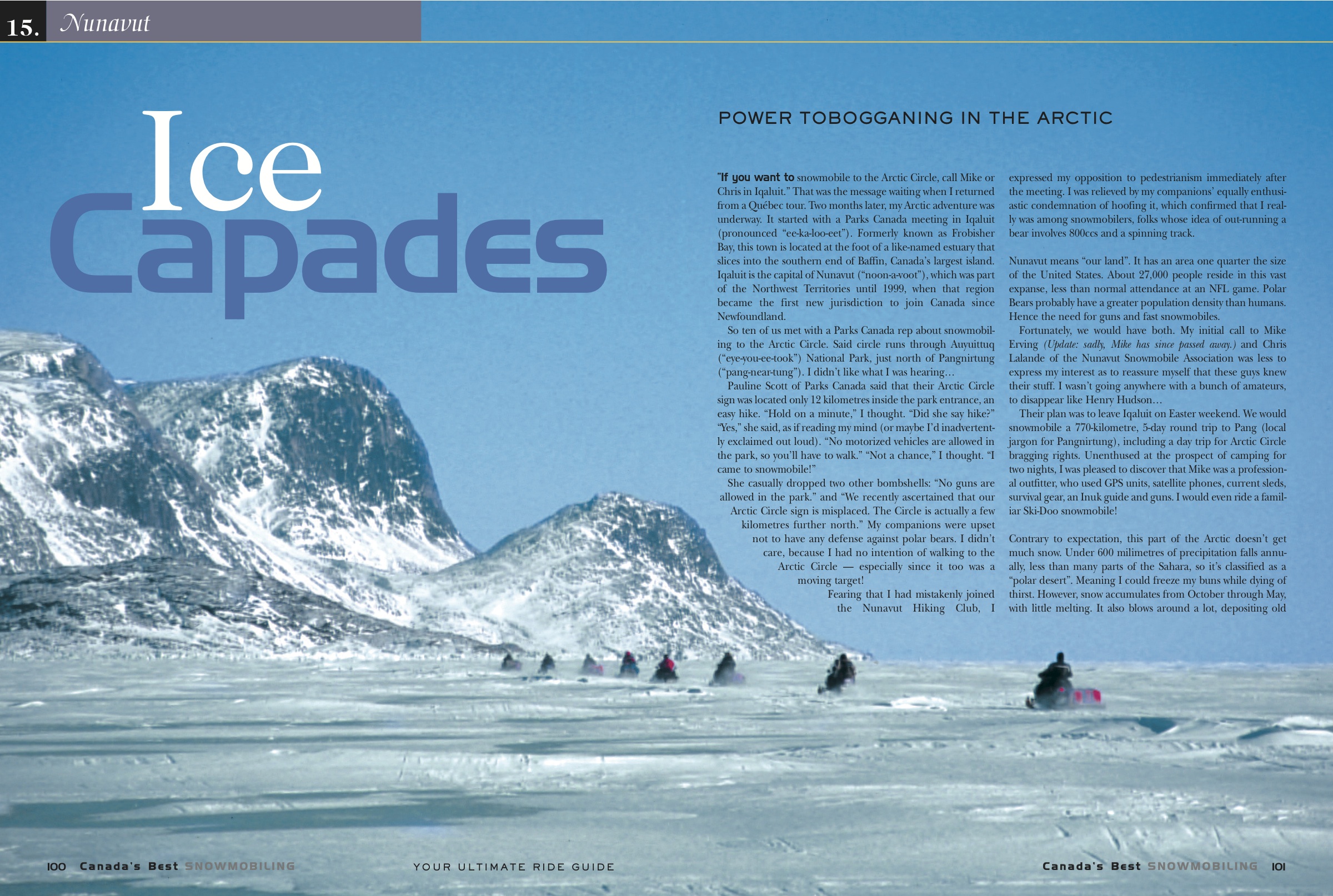 “If you want to snowmobile Arctic to the Arctic Circle, call Mike or Chris in Iqaluit.”  That was the message waiting when I returned from a Québec snowmobile tour. Two months later, my snowmobile vacation adventure was underway. Arctic snowmobiling, Nunavut style. It started with a Parks Canada meeting in Iqaluit (pronounced “ee-ka-loo-eet”).

Formerly known as Frobisher Bay, this town is located at the foot of a like-named estuary. It slices into the southern end of Baffin, Canada’s largest island. Iqaluit is the capital of Nunavut (“noon-a-voot”). It part of the Northwest Territories until 1999. Then that region became the first new jurisdiction to join Canada since Newfoundland.

So ten of us met with a Parks Canada rep about our plan to snowmobile Arctic. To the Arctic Circle. Said circle runs through Auyuittuq (“eye-you-ee-took”) National Park, just north of Pangnirtung (“pang-near-tung”). So why did Parks Canada insist on this meeting?

Where Is That Circle?

Pauline Scott of Parks Canada said that their Arctic Circle sign was located only 12 kilometres inside the park entrance, an easy hike. “Hold on a minute,” I thought. “Did she say hike?” “Yes,” she said, as if reading my mind (or maybe I’d inadvertently exclaimed out loud). “No motorized vehicles are allowed in the park, so you’ll have to walk.” “Not a chance,” I thought. “I came to snowmobile!”

She casually dropped two other bombshells: “We don’t allow guns in the park.” and “We recently ascertained that our Arctic Circle sign is misplaced. The Circle is actually a few kilometres further north.” My companions felt upset not to have any defence against polar bears. I didn’t care, because I had no intention of walking to the Arctic Circle.  Especially since it was also a moving target!

Fearing that I had mistakenly joined the Nunavut Hiking Club, I expressed my opposition to pedestrianism immediately after the meeting. I felt relieved by my companions’ equally enthusiastic condemnation of hoofing it. This confirmed that I really was among snowmobilers, folks whose idea of out-running a bear involves 800cc’s and a spinning track.

Read more about my one of a kind snowmobile visit to Iqaluit as published in Snow Goer Canada magazine!