No Longer Possible To Snowmobile Around Lake Superior… 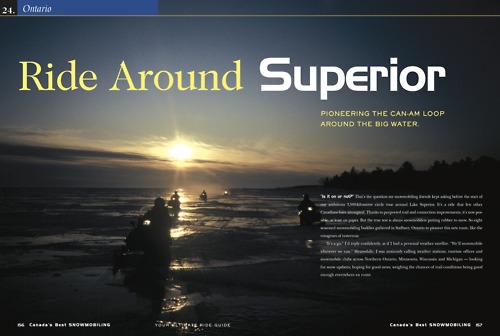 …But it Still Makes A Great Story!

It’s a snowmobile tour that few other Canadians have attempted on their snowmobile vacation. Thanks to purported trail and connection improvements, it was possible, at least on paper. But the true test is always snowmobilers putting rubber to snow. So eight seasoned snowmobiling buddies gathered in Sudbury, Ontario to pioneer this new route, like the voyageurs of yesteryear. (Editor’s Note: Due to the subsequent closure of trails north of Lake Superior, riding this loop is no longer possible.)

Getting Ready For Our Snowmobile Tour

“It’s a go,” I’d reply confidently, as if I had a personal weather satellite. “We’ll snowmobile wherever we can.” Meanwhile, I was anxiously calling weather stations, tourism offices and snowmobile clubs across Northern Ontario, Minnesota, Wisconsin and Michigan — looking for snow updates; hoping for good news; weighing the chances of trail conditions being good enough everywhere en route.

Our goal was to circumnavigate the largest of the Great Lakes – Superior – by riding some of the world’s most renowned snowmobile trails on both sides of the international border.

We had ten days for our voyage of discovery. Little did I know that before our trek was over, I’d ride on many strange surfaces, be transported in surprising ways, rent my own house, snowmobile Lake Huron for heart-stopping hours, arrive after dark each day and test the limits of my endurance, too.

We spent the night before departure in preparation. Snowmobiles have minimal storage space – stowed gear has a nasty habit of shaking loose along the trail. So each of us devised ingenious ways to pack rat and secure a dozen litres of oil, emergency parts, tools and personal luggage on board, using as many bungee cords as money could buy. No one carried spare gas, but I had a small jerry can of oil, which would serve when emptied. By departure, my sled resembled a junk wagon more than a sleek engine of conquest.

Read more about my snowmobile ride around Lake Superior as published in my sold-out book, Canada’s Best Snowmobiling!