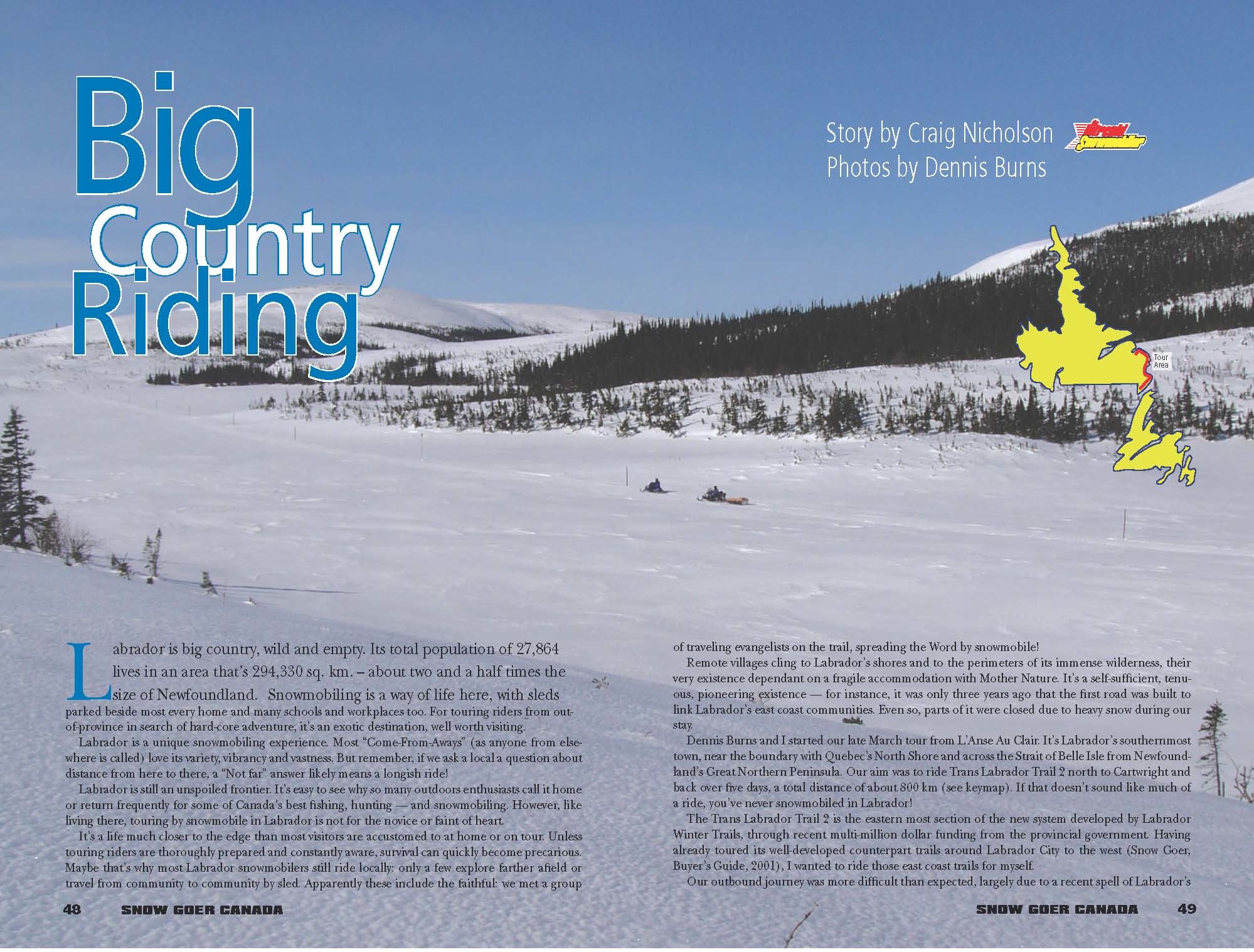 Snowmobile Eastern Labrador – it’s a big country, wild and empty. Its total population of 27,864 lives in an area that’s 294,330 square kilometres. This is about two and half times the size of Newfoundland. So read on for my Labrador snowmobile tour story…

Snowmobiling is a way of life here, with sleds parked beside most every home and many schools and workplaces too. For touring riders from out-of-province in search of hard-core snowmobile tour adventure, it’s an exotic destination, well worth visiting for a one-of-a-kind snowmobile vacation.

Labrador is a singular snowmobiling experience. Most “Come-From-Aways” (as anyone from elsewhere is called) love its variety, vibrancy and vastness. But remember, when asking a local how far it is from here to there, a “Not far” answer is relative to its vast distances!

Labrador is still an unspoiled frontier. It’s easy to see why so many outdoors enthusiasts call it home or return frequently for some of Canada’s best fishing, hunting — and snowmobiling. However, like living there, riding a Labrador snowmobile tour is not for the novice or faint of heart.

Snowmobile Eastern Labrador is Life on the Edge

It’s a life much closer to the edge than most visitors are accustomed to at home or on tour. Unless touring riders are thoroughly prepared and constantly aware, survival can quickly become precarious. Maybe that’s why most Labrador snowmobilers still ride locally. Only a few explore farther a field or travel from community to community by snow machine. Apparently these include the faithful. We met a group of traveling evangelists on the trail spreading the word by snowmobile!

Remote villages cling to Labrador’s shores and to the perimeters of its immense wilderness. Their very existence depends on a fragile accommodation with Mother Nature. It’s a self-sufficient, tenuous, pioneering existence. For instance, it was only shortly after the turn of this century that the first road was built to link Labrador’s east coast communities. Even so, parts of it were closed due to heavy snow during our stay on this Labrador snowmobile tour.

Riders should reconfirm the routes and services mentioned in this Labrador snowmobile tour article as they may have changed since publication.