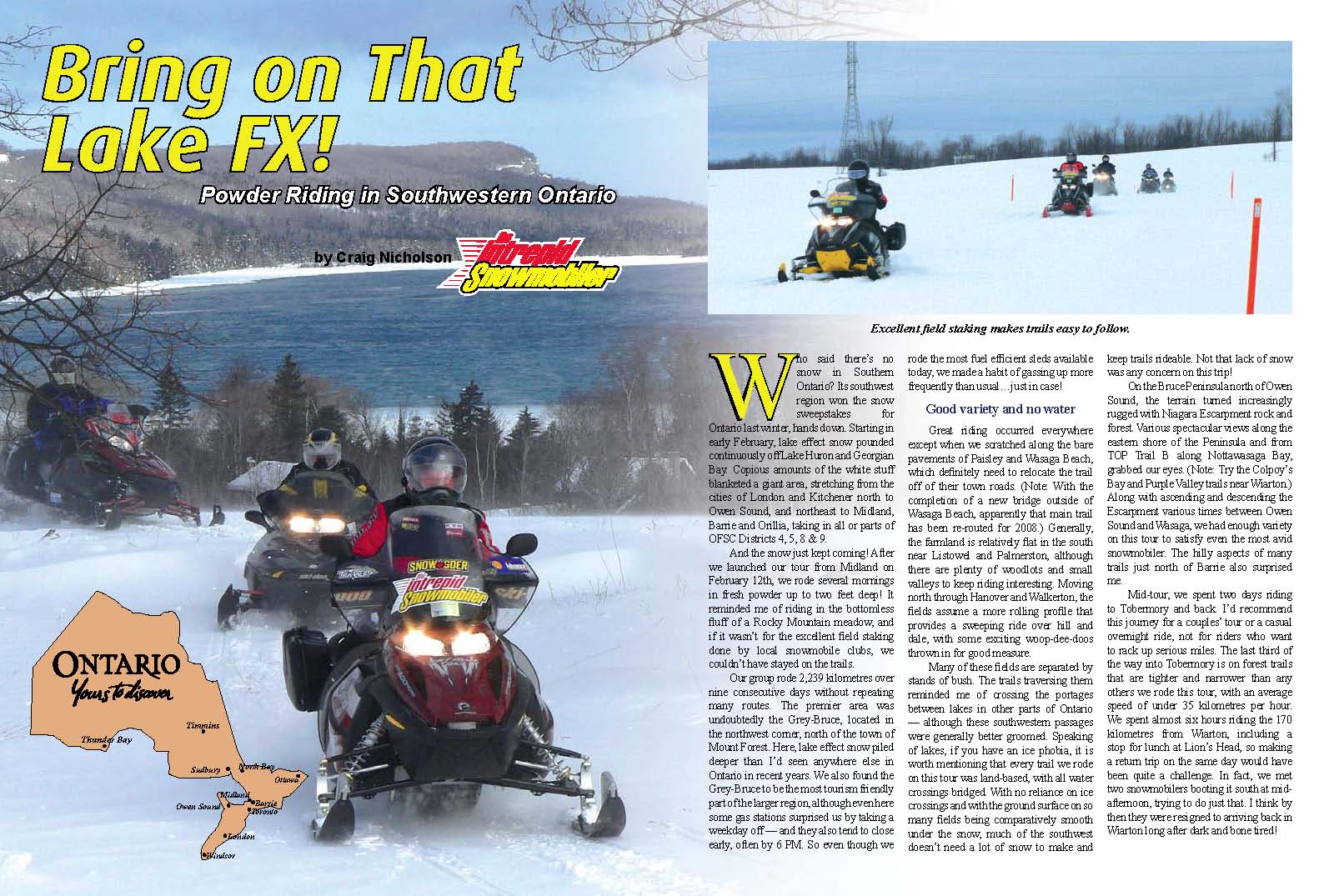 Snowmobile Grey Bruce Ontario – whoever said there’s no snow in Central Canada for your Ontario snowmobile tour or snowmobile vacation?

This southwest region often wins the snow conditions sweepstakes for Ontario, hands down. Each winter, lake effect snow pounds continuously off Lake Huron and Georgian Bay. Copious amounts of the white stuff blanket a giant area, stretching on #ontariosnowtrails from the cities of London and Kitchener north to Owen Sound. And northeast to Midland, Barrie and Orillia (taking in all or parts of OFSC Districts 4, 5, 8 & 9).

And the snow can just keep coming! After we launched our Ontario snowmobile tour from Midland, we rode several mornings in fresh powder up to two feet deep! It reminded me of riding in the bottomless fluff of a Rocky Mountain meadow. If it wasn’t for the excellent field staking done by local snowmobile clubs, we couldn’t have followed the trails!

Our snowmobile magazine group rode 2,239 kilometres over nine consecutive days on this Ontario snowmobile tour without repeating many routes. The premier area was undoubtedly the Grey-Bruce, located in the northwest corner, north of the town of Mount Forest. Here, lake effect snow piled deeper than I’d seen anywhere else in Ontario in recent years.

We also found #ridegreybruce to be the most tourism-friendly part of the larger region, although even here some gas stations surprised us by taking a weekday off. And be careful, because they also tend to close early, often by 6 PM. So even though we rode the most fuel efficient snow machines available, we made a habit of gassing up more frequently than usual, just in case!

That said, great riding occurred everywhere except when we scratched along the bare pavements of Paisley and Wasaga Beach. These places definitely need to relocate the trail off of their town roads. (Note: With the completion of a new bridge outside of Wasaga Beach, apparently that main trail has been re-routed since our tour.) Generally, the farmland is relatively flat in the south near Listowel and Palmerston, although there are plenty of woodlots and small valleys to keep riding interesting.

Moving north through Hanover and Walkerton, the fields assume a more rolling profile. It provides a sweeping ride over hill and dale, with some exciting woop-dee-doos thrown in for good measure! Best of all, now there are officially designated, mapped and marked snow tours to ride in Grey Bruce: the Walters Falls Tour, the Queen’s Bush Tour, the Apres Harvest and the Saugeen River Tour!