Snowmobile Lanaudiere Quebec is like experiencing snowmobiling nirvana on your Quebec snowmobile tour or snowmobile vacation. Nirvana is a sublime state of being that a few lucky snowmobilers reach maybe once a ride, when a section of trail can only be described as “heavenly”. The symptoms of nirvana include spine tingling, pulse racing, goose bumps, ear-to-ear grins. And the certainty that it doesn’t get any better than this on a Quebec snowmobile tour…

We achieved snowmobiling nirvana multiple times on our three-day, early January Quebec snowmobile tour. And you can too, by heading to Lanaudière-Mauricie Region. It’s one of a few Quebec snowmobile tour destinations that can virtually guarantee decent snow conditions and trails in the first week of any New Year.

Here, in the heart of the Laurentian Mountains just north of Montreal, we found trail after heart-stopping trails that took our breathe away. I’d keep expecting each amazing trail to end around the next corner or over the hill ahead. But more often than not it would simply get better. That’s because most trails in the central and northern parts of Lanaudière are on forest access roads, old logging roads and utility corridors. Many of these provide long, wide straightaways. They also offer good sight lines, gentle curves and rolling topography. Perfect for an easy, effortless Quebec snowmobile tour.

Our snowmobile magazine crew consisted of myself and Craig Irwin, Brent Murphy, Dan Carty, Don Webb, Jim Heintzman and Frank Crocco. Also, we teamed up with Marty Convery from Snowmobiler TV for this Quebec snowmobile tour. We staging out of Auberge du Vieux Moulin, near Saint-Émélie-de-l’Énergie. The occasion was our annual start of season break-in ride. This is where we check and tweak some of the new media snow machines before putting them through their real world paces over the season.

But when we heard that about 10% the region’s 4,800 kilometres of snowmobile trails benefitted from a more than $3 million investment, we also made it our mission to ride as many of these newly improved corridors as possible. With the support of the Quebec government and the land management agency SÉPAQ, this project re-routed snowmobile trails around Mont Tremblant Park. It’s located just north and west of the Lanaudière snowmobiling meccas of Saint-Donat and Saint-Michel-des-Saints.

Many snow machine riders have visited to this mountainous area of Lanaudière previously on a Quebec snowmobile tour. They know that one of its attractions was the network of trails on the roads in the park. So when snowmobiling there closed, it was important for Lanaudière to deliver an alternative. One that still provided a great Quebec snowmobile tour experience. And that’s what happened with those millions of dollars. I’m one of those who have thrilled to Lanaudière trails many times over the years. So I can attest that snowmobiling there remains as good as ever. Kudos to the Lanaudière snowmobile clubs that did most of the trail work! 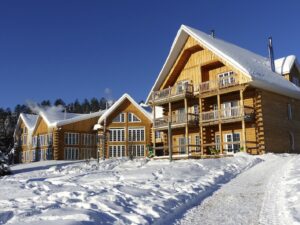 Meanwhile, if you’re thinking about a long weekend ride in Quebec this winter, check out Lanaudière. You’ll discover authentic Quebec lodging where we stayed at the family owned and operated Auberge du Vieux Moulin (see snowmobile video above). This rustic, homey and bilingual resort has all the amenities a snowmobiler needs. These include home-cooked gourmet meals and a great spa. It’s complete with massage, indoor pool, sauna, steam room and indoor and outdoor hot tubs.

An ideal couples destination, the inn offers also a multitude of other winter activities. These include ice-skating, ice fishing, cross country skiing and snow tubing. Meanwhile, its rooms are tastefully appointed and well-kept, with modern bathrooms and comfy beds. Chalets are also available for larger groups and families. 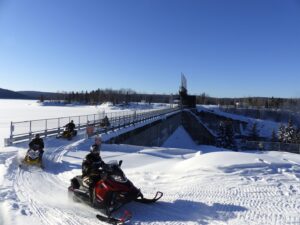 Trail over dam at Lac Taureau

The inn offers snow machines and gear rentals for those who don’t have their own. It also has gas on site for guests, plus secure sled and truck parking. Best of all, the groomed trail comes to their door. And Auberge du Vieux Moulin is located in the heart of the Laurentians with good day riding opportunities in every direction.