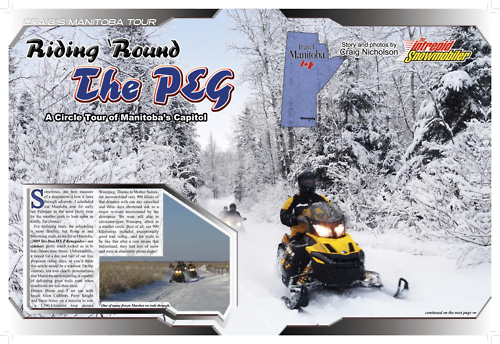 Snowmobile manitoba? Sometimes, the best measure of a good snowmobile destination is how it fares through adversity. I scheduled our snowmobile Manitoba tour for early last February as the most likely time for the weather gods to look upon us kindly. Fat chance!

For trailering snowmobile tours, the scheduling is more flexible; but flying in and borrowing sleds, as we did in Manitoba, pretty much locks us in to that chosen time frame. Unfortunately, it rained for a day and half of our five proposed riding days, so you’d think this article would be a washout.

On the contrary, our tour clearly demonstrates that Manitoba snowmobiling is capable of delivering great trails for your snowmobile vacation even when conditions are less than ideal. Meanwhile, if you’re interested in more Western Canada snowmobile tour destinations, check out the rest of my articles.

Dennis Burns and I set out with locals Allen Cuthbert, Perry Knight and Dave Amey on a mission to ride a 1,500-kilometre loop around Winnipeg on this Manitoba snowmobile tour. Thanks to Mother Nature, we snowmobiled only 900 klicks of that distance with one day cancelled and three days shortened due to a major re-route necessitated by the downpour. We were still able to circumnavigate Winnipeg, albeit in a smaller circle. Best of all, our 900 kilometres included exceptionally good trail riding…and for trails to be like that after a rain means that beforehand, they had lots of snow and were in absolutely primo shape!

We experienced many examples of top-notch trails on our first and second day of riding. Launching on a sunny Sunday from Bird’s Hill, just north of Winnipeg, we were braced for the possibility of a rough ride following a full Saturday of trail use. Instead, the trails north to Gimli and then southwest to Portage La Prairie were uniformly smooth with only a few drifted spots where prevailing winds swept some fields.

Riders should reconfirm the routes and services mentioned in this Manitoba snowmobile tour article as they may have changed since publication.