I hadn’t expected to snowmobile Midwestern Ontario in a furious snow storm. Our Supertrax crew had set out in clear conditions. But suddenly, we ran into a veritable wall of snow. Visibility went to near zero as the snowfall intensified.

The white stuff packed into our face shields, our laps, our running boards and covered our sleds. Fresh powder piled up quickly, burying what had been the groomed trail ahead. Our progress slowed to a crawl. Now, our only way forward was picking our way carefully from stake to stake…

Cloud cover had greeted us on our first day staging from Owen Sound, as we rode on smooth trails covered with several inches of fresh snow that fell overnight. Although not forecast, the next day we rode smack into that raging, lake effect blizzard. It impaired visibility for hours, while threatening to obliterate every trail. But on day three, we snowmobiled under bright, sunny skies on newly groomed trails as good as any we’ve ever been on.

Three totally different kinds of riding days – welcome to snowmobiling in Midwestern Ontario. This region is the northern half of what’s typically known as “Southwestern Ontario”. It’s home to some of the wildest and most unpredictable weather anywhere. And to some of the most enjoyable trail riding in the snowbelt!

American snowmobilers trailering into Ontario at Detroit (bridge or tunnel) or Port Huron need look no farther than to snowmobile Midwestern Ontario for a memorable experience. Same goes for any Ontario riders living along the 401 Highway corridor or throughout the Golden Horseshoe. Or for anyone else who wants to “ride more, drive less.”

That’s because with less than a couple of hours drive, visitors can be on the snow and on the trails in Midwestern Ontario. Midwestern Ontario includes what’s commonly referred to as “the Grey-Bruce”. But it’s much more than that. Sandwiched between Lake Huron and Georgian Bay, it also boasts a large chunk of the famous Niagara Escarpment.

This rocky ridge forms the scenic spine of the Bruce Peninsula all the way north to Tobermory. In addition to the aforementioned Bruce and Grey Counties, Midwestern Ontario also encompasses Huron, Perth and Wellington Counties.

Meanwhile, Its largest centre is The City of Owen Sound (pop. 21,341). Located to the north of the region at the eastern base of the Bruce Peninsula, this urban centre is an ideal destination for staging day loops. 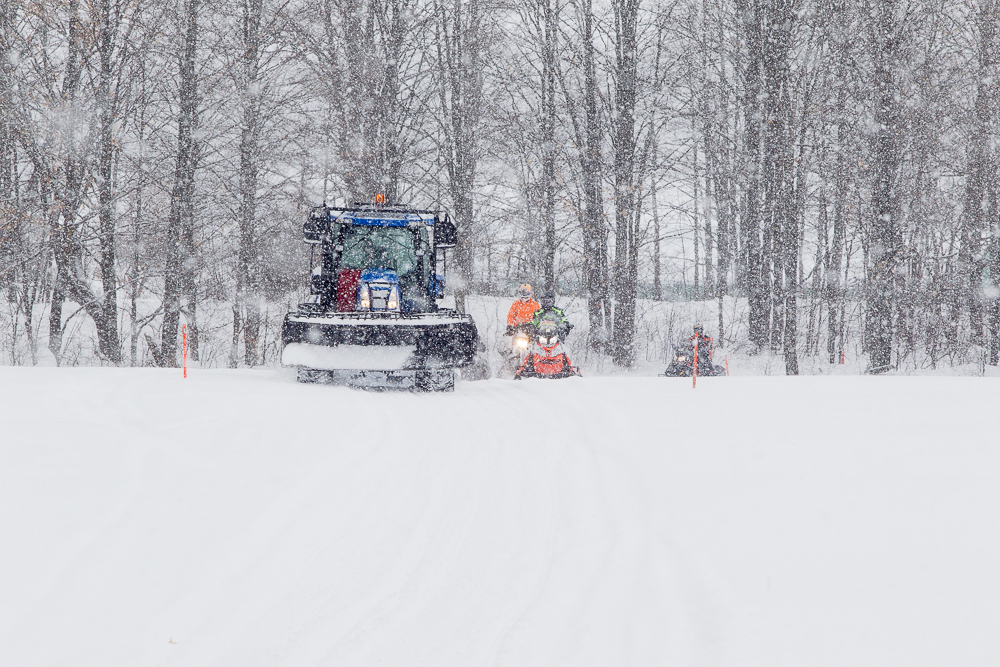 As we experienced first-hand, Midwestern Ontario’s fortuitous positioning within the Great Lakes basin can result in sudden and significant lake effect snow at any time. These often-unpredictable snowsqualls can be either localized or pervasive, frequently dumping massive amounts in just a few hours.

That’s why over 3,000 kilometres of groomed snowmobile trails throughout Midwestern Ontario can be groomed table top one day, but buried deep in fresh powder the next. Sometimes, prevailing westerly winds off Lake Huron are too strong. They can sweep snow cover off some open field trails in the blink of an eye, while piling up massive drifts elsewhere.

So, with everything that Old Man Winter throws at them, the challenge for the snowmobile clubs of District 9 of the Ontario Federation of Snowmobile Clubs (OFSC) is to keep their trails in tip-top riding shape. Amazingly, they make it happen, again and again throughout the season. In part that’s because OFSC District 9 is a model of grooming effectiveness and efficiency.

This is thanks to a recent reorganization that made grooming operations a centrally directed and cooperative effort. Its main focus is to deliver the best possible trails consistently across the entire district, regardless of club boundaries. And judging from our experience there last winter, their new system is a resounding success for snowmobilers.

What’s more, here’s one sure thing I’ve learned from many years of riding. The litmus test for trail navigation is whether or not visiting riders can find their way during a serious storm. I’m pleased to report that OFSC District 9 passed with flying colours during our day two squall-ride, when our visibility was often severely reduced. But thanks to frequent trail signs and numerous intersection map boards, we found our way.

To say nothing of their ubiquitous field stakes. In fact, it’s estimated that at least 75% of District 9’s trails are double staked. This guides riders between them, thereby avoiding trespass on farmland. Some blind hills are even triple-staked for extra safety. In total, clubs may be installing and taking down upwards of 23,000 stakes each season. You’ll be extremely thankful for this massive effort when field stakes become your lifeline in a storm! 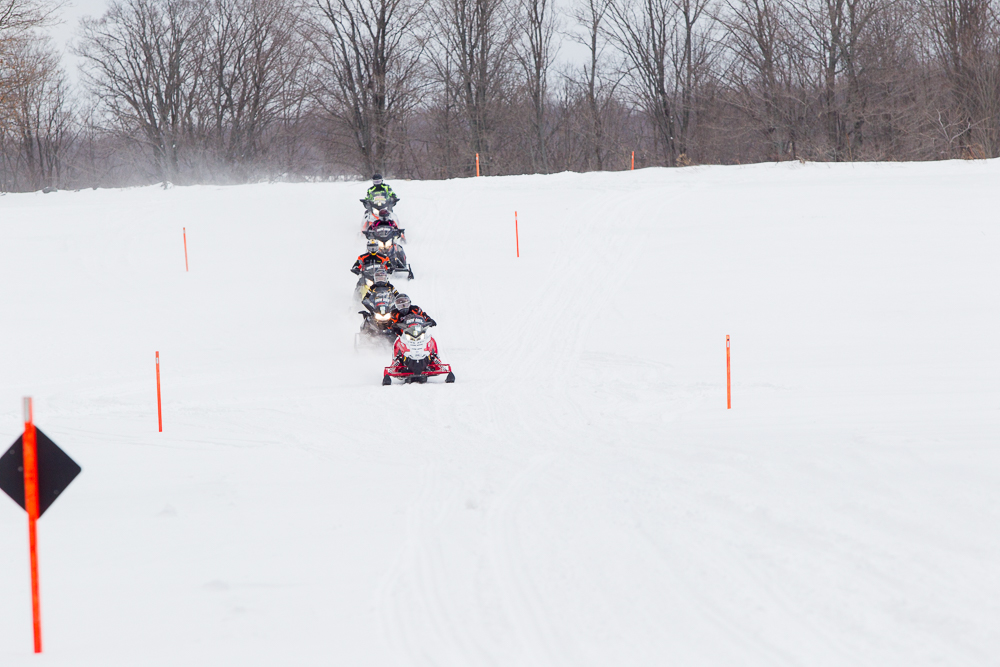 Navigation-wise, District 9 even goes one farther than many other trail operations. They’ve installed intersection numbers throughout their system. This way, riders can verify their exact location with corresponding numbers on their printed trail guide and on the OFSC Interactive Trail Guide. In my opinion, their only navigation deficiency is not also numbering their many local trails. Doing so would be the icing on the cake for visiting riders. 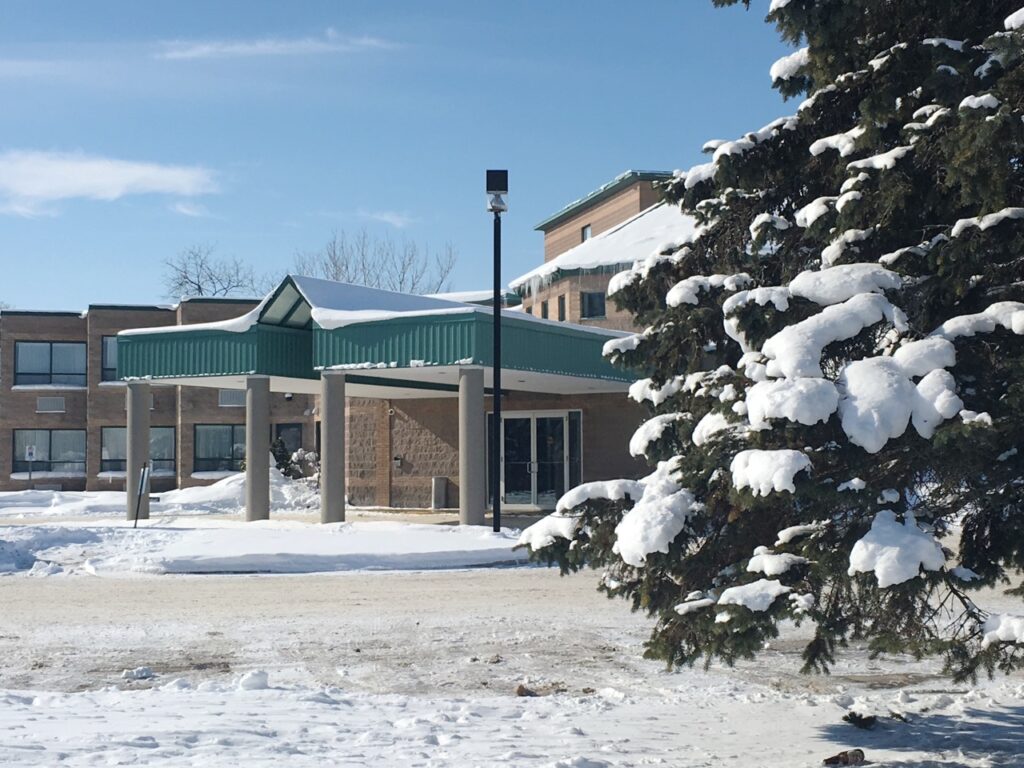 For our three days or riding, we staged out of the Best Western Inn On The Bay in Owen Sound. It’s located on the east side of town beside the water. This snowmobile-friendly hotel provides direct trail access from Trans Ontario Provincial (TOP Trail B at Intersection 144). The Best Western offers ample truck and trailer parking, reliable Wi-Fi, in-room fridge, and a hot tun & whirlpool. I highly recommend Bishop’s Landing, their scrumptious on-site restaurant, open for both early breakfast and late dinners. Fuel is trail accessible just south of the hotel, off TOP Trail B (turn right at Intersection 143). 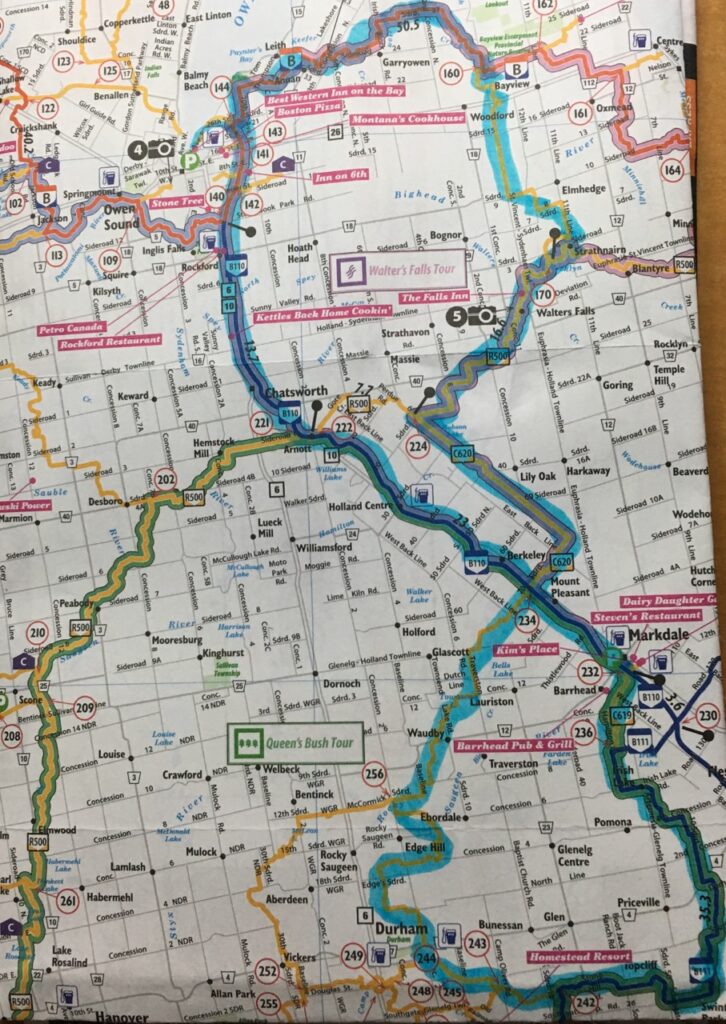 From the Best Western Inn On The Bay, we snowmobiled three-day loops. The first steered east to include the Walter’s Falls Tour followed by a stop at Steven’s Bar-B-Q Restaurant in Markdale for lunch with fuel nearby. Our loop continued southwest through Durham before turned back north for home. With so many local trails to explore, we could have easily doubled our ride total of 200 kilometres. 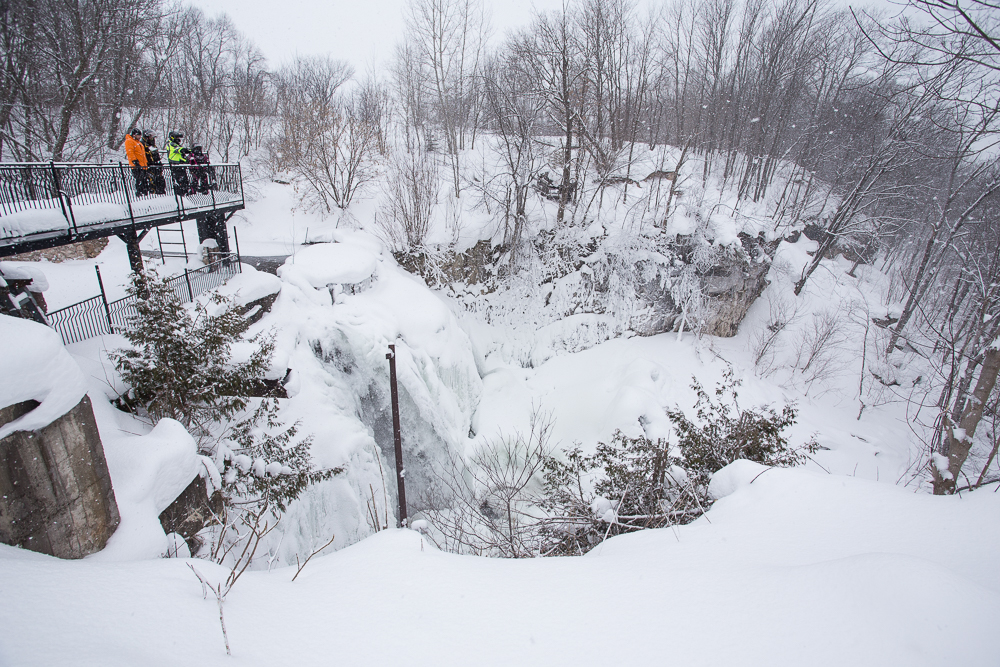 Note: Day Two loop route map missing due to constant detours in blizzard ride! During our blizzard day, we had expected to snowmobile southwest from Owen Sound to ride the 264-kilometre Saugeen River Tour. But with so much lake effect snow in the way, we considered ourselves lucky to get in 175 kilometres of tough slugging in seven hours of sledding. Our lunch stop was Walker Catering Co. Cafe & Eatery in Tara. However, as a bonus we visited scenic Sauble Falls on TOP Trail B018 just north of Sauble Beach (fuel). 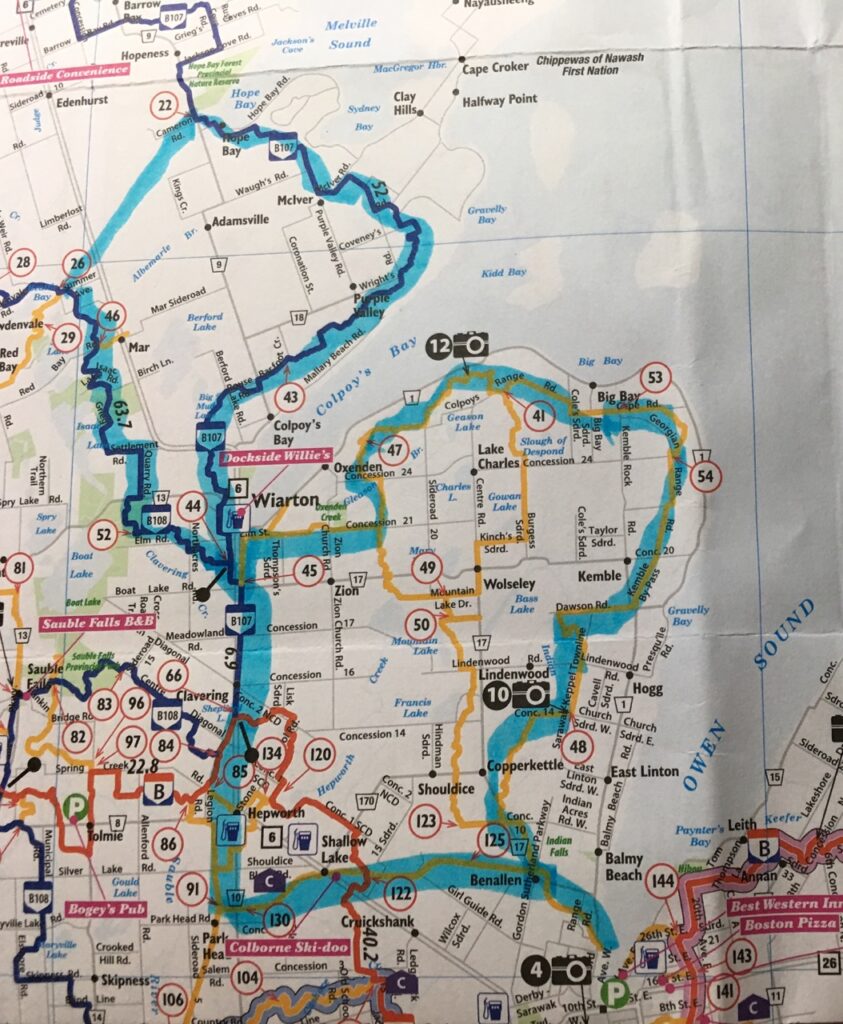 Meanwhile, our 200-kilometre third day loop took in the Skinner’s Bluff outlook over Colpoy’s Bay (local trail running east from Wiarton). We also made a neat lunch stop at the Hungry Hanger at the Wiarton Keppel International Airport. And later had a great view of Hope Bay on Top Trail B107. We had intended to ride a loop through Lion’s Head. But several of the guys had to trailer home that evening, so we detoured back to the Best Western early. 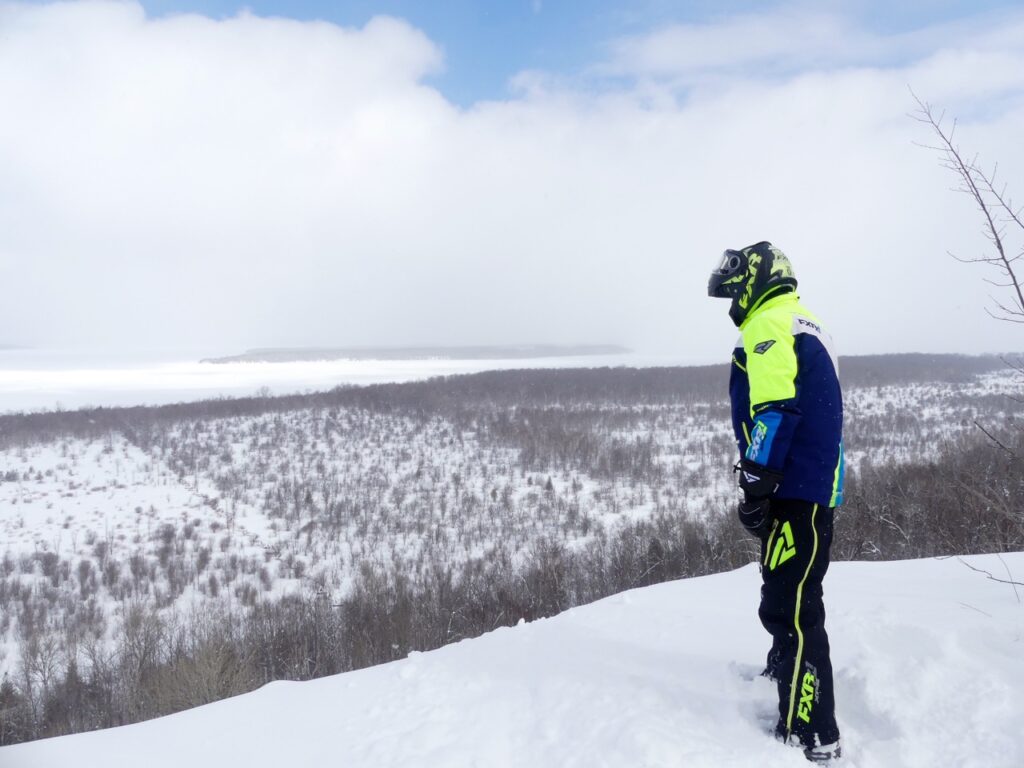 There’s no doubt that OFSC District 9 embraces visiting riders. It provides six well marked snow tours promoted by the OFSC. The District has also identified 12 must-see scenic attractions along its trails for visitors to discover (see their print map for details).

They’ve also laid out their trail network to access sufficient services and amenities on route. And to take in a variety of rolling farmlands, bush lots, woodlands, and of course, Escarpment ruggedness. Best of all for aquaphobic riders, their trails totally avoid any ice crossings. 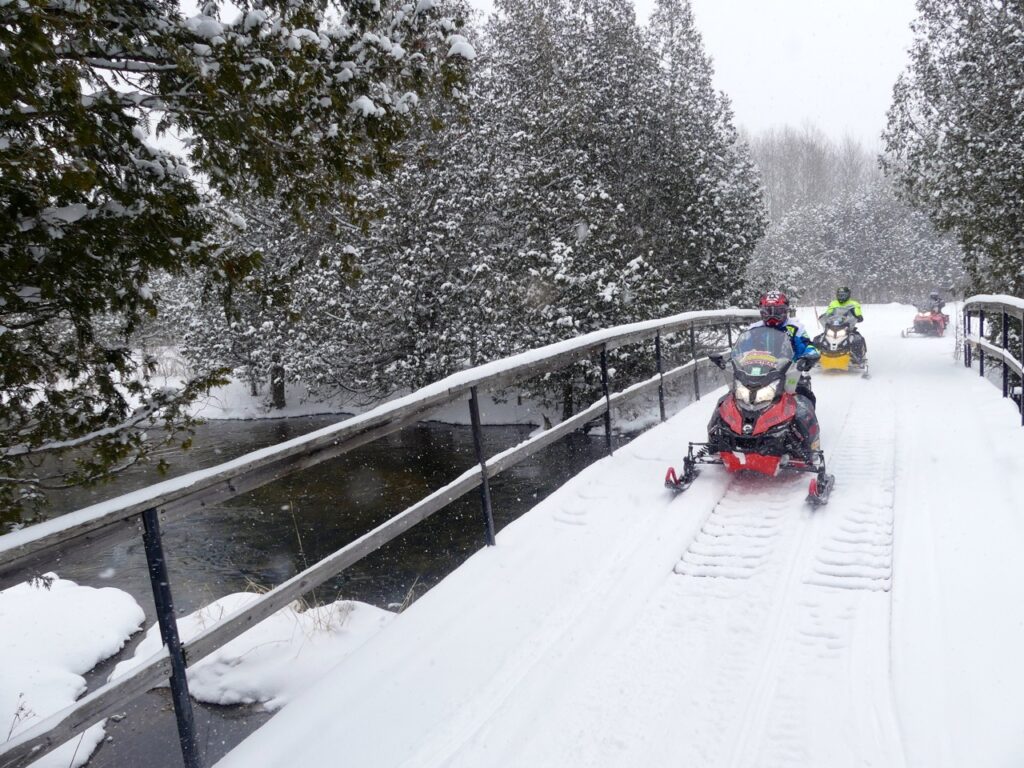 What’s more, Midwestern Ontario is criss-crossed with snowmobile trails, both TOP and local. So, there are always several options available to shorten or extend your daily riding distance to suit time and preference. There’s even a trail to the tip of the Bruce Peninsula.

But fair warning. Due to land restrictions, from Lion’s Head north it’s a narrow, twisty route reminiscent of what trail riding used to be like in days gone by. Thus, this unique trip is best undertaken with a planned overnight stay at Tobermory if you’re staging from the Owen Sound area.

As you can see, Midwestern Ontario provides a remarkable range of sledding opportunities. With trails starting less than an hour north of the Cities of London and Kitchener-Waterloo, the region is easily accessible from the Highway 401 corridor. And that’s why this Ontario destination proclaims: “great snow is closer than you think!” 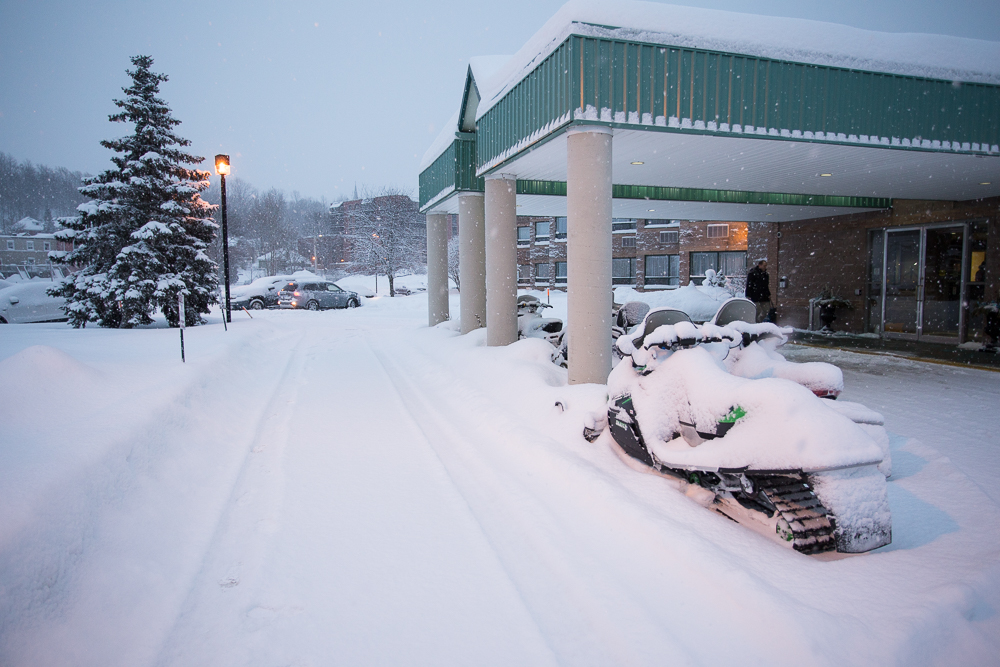