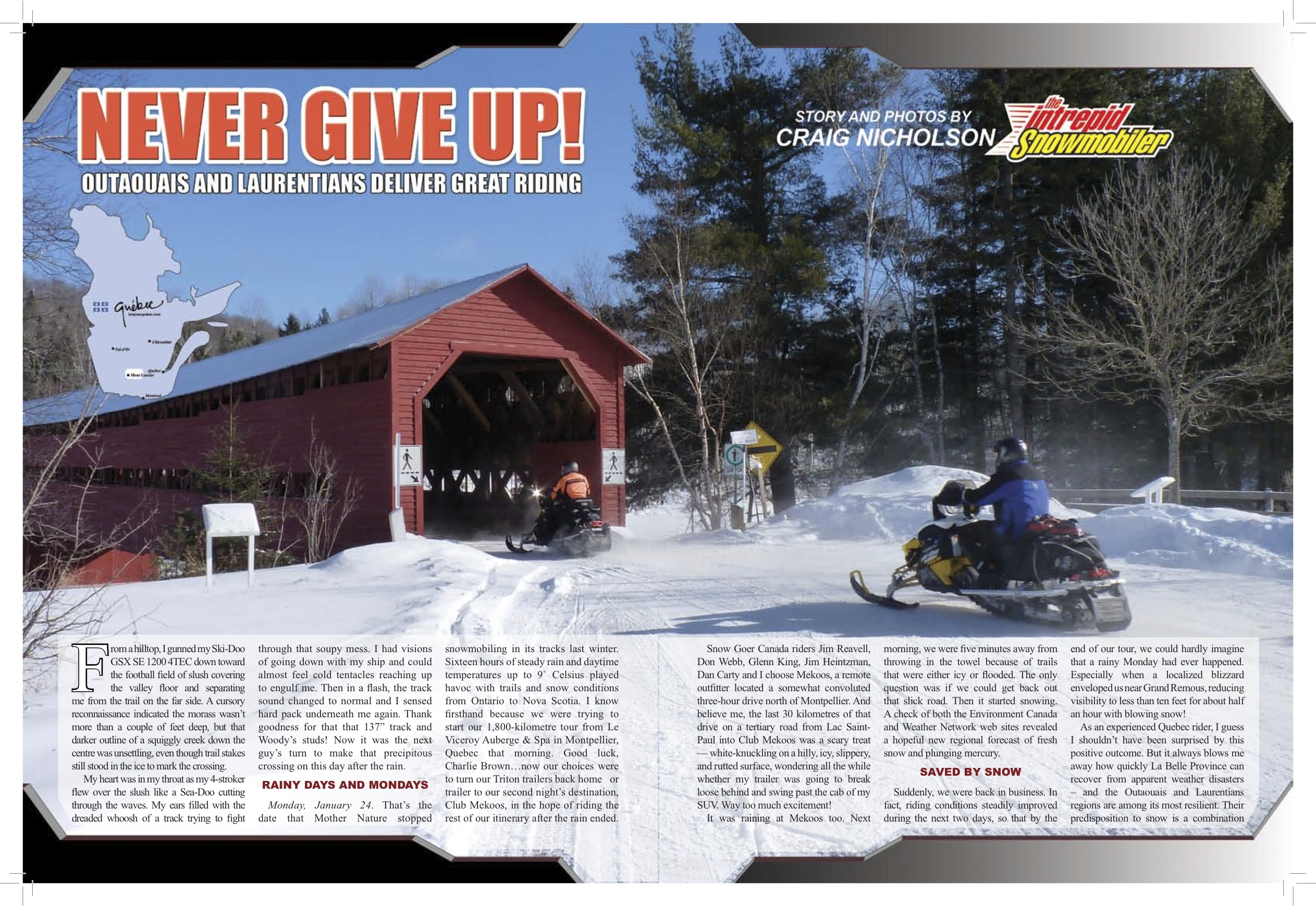 To go snowmobile Outaouais Laurentians for your Quebec snowmobile tour or snowmobile vacation is an absolute blast. From a hilltop, I gunned my Ski-Doo GSX SE 1200 4TEC snowmobile down toward the football field of slush covering the valley floor and separating me from the trail on the far side. A cursory reconnaissance indicated the morass wasn’t more than a couple of feet deep, but that darker outline of a squiggly creek down the centre was unsettling, even though trail stakes still stood to mark the crossing.

My heart was in my throat as my 4-stroker snow machine flew over the slush like a Sea-Doo cutting through the waves. My ears filled with the dreaded whoosh of a track trying to fight through that soupy mess. I had visions of going down with my ship and could almost feel cold tentacles reaching up to engulf me. Then in a flash, the track sound changed to normal and I sensed hard pack underneath me again. Thank goodness for that 137” track! Now it was the next guy’s turn to make that precipitous crossing on this day after the rain had stopped…

Monday, January 24. That’s the date that Mother Nature stopped snowmobiling in its tracks that winter. Sixteen hours of steady rain and daytime temperatures up to 9˚ Celsius played havoc with trails and snow conditions from Ontario to Nova Scotia. I know firsthand because we were trying to start our 1,800-kilometre Quebec snowmobile tour from Le Viceroy Auberge & Spa in Montpellier that morning. Good luck, Charlie Brown…now our choices were to trailer back home or trailer to our second night’s destination, Club Mekoos, in the hope of riding the rest of our Quebec snowmobile tour itinerary after the rain ended.

Snowmobile magazine riders Jim Reavell, Don Webb, Glenn King, Jim Heintzman, Dan Carty and I choose Mekoos, a remote outfitter located a somewhat convoluted three-hour drive north of Montpellier. And believe me, the last 30 kilometres of that drive on a tertiary road from Lac Saint-Paul into Club Mekoos was a scary treat — white-knuckling on a hilly, icy, slippery, and rutted surface, wondering all the while whether my Triton trailer was going to break loose behind and swing past the cab of my SUV. Way too much excitement!

It was raining at Mekoos too. Next morning, we were five minutes away from throwing in the towel because of trails that were either icy or flooded. The only question was if we could get back out that slick road. Then it started snowing. A check of both the Environment Canada and Weather Network web sites revealed a hopeful new regional forecast of fresh snow and plunging mercury that would save our Quebec snowmobile tour.