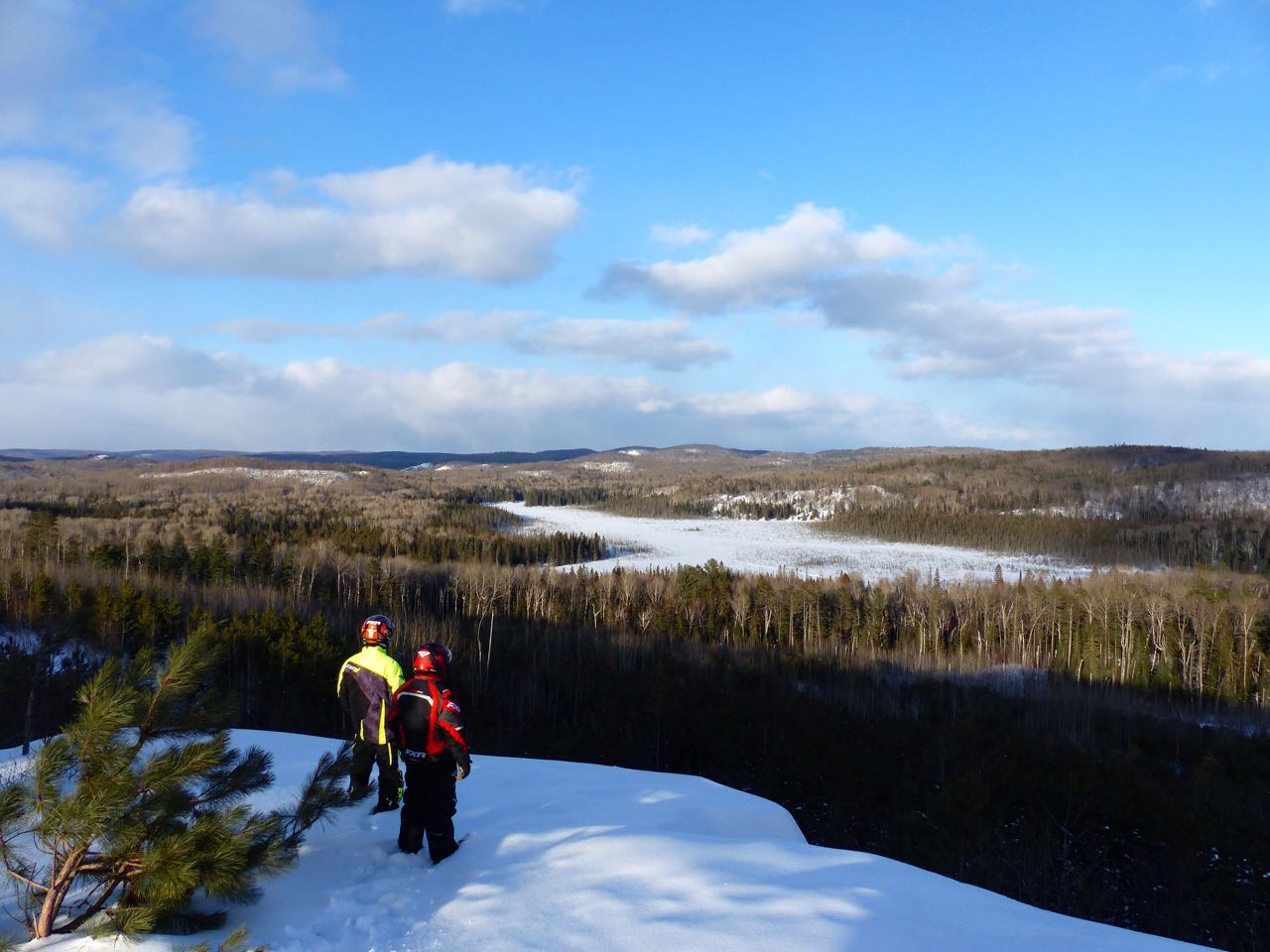 In recent winters, the Snow Country Snowmobile Association has more than lived up to its name in Ontario snowmobiling. If Southern Ontario has one reliable destination for good snow conditions and trails all winter, this is it. It’s part of the Ontario’s Highlands Tourism Region. 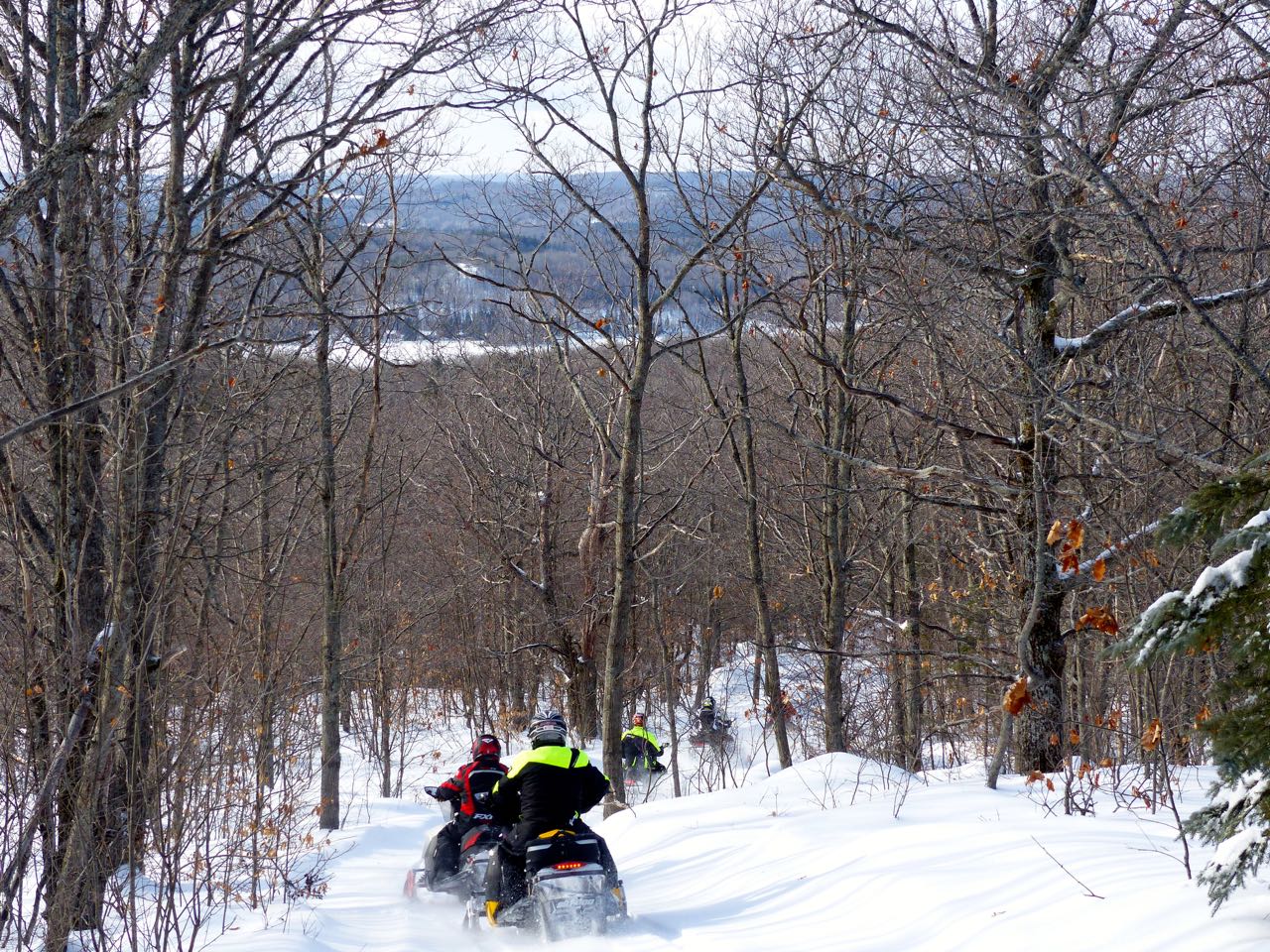 Looking for a central staging location for your snow machine explorations of the Opeongo Hills? Barry’s Bay Ontario snowmobiling is a smart choice. For starters, this family-friendly place is positioned at the junction of OFSC TOP Trails B102 and E019. It’s also not far from other intersections with TOP B and TOP B101A. So there are multi-direction, trail and distance snowmobiling options for Ontario snowmobile tours.

Next, the area snowmobile clubs take grooming for tourists like you and I very seriously. They do their absolute best to keep their section of Ontario snowmobile trails as smooth as possible. What’s more, Barry’s Bay clearly demonstrates its snowmobile-friendly nature. There’s a well-marked trail through town. It goes right past the last remaining wooden water tower in Ontario. It also accesses every service a snowmobiler needs, including a range of accommodations. 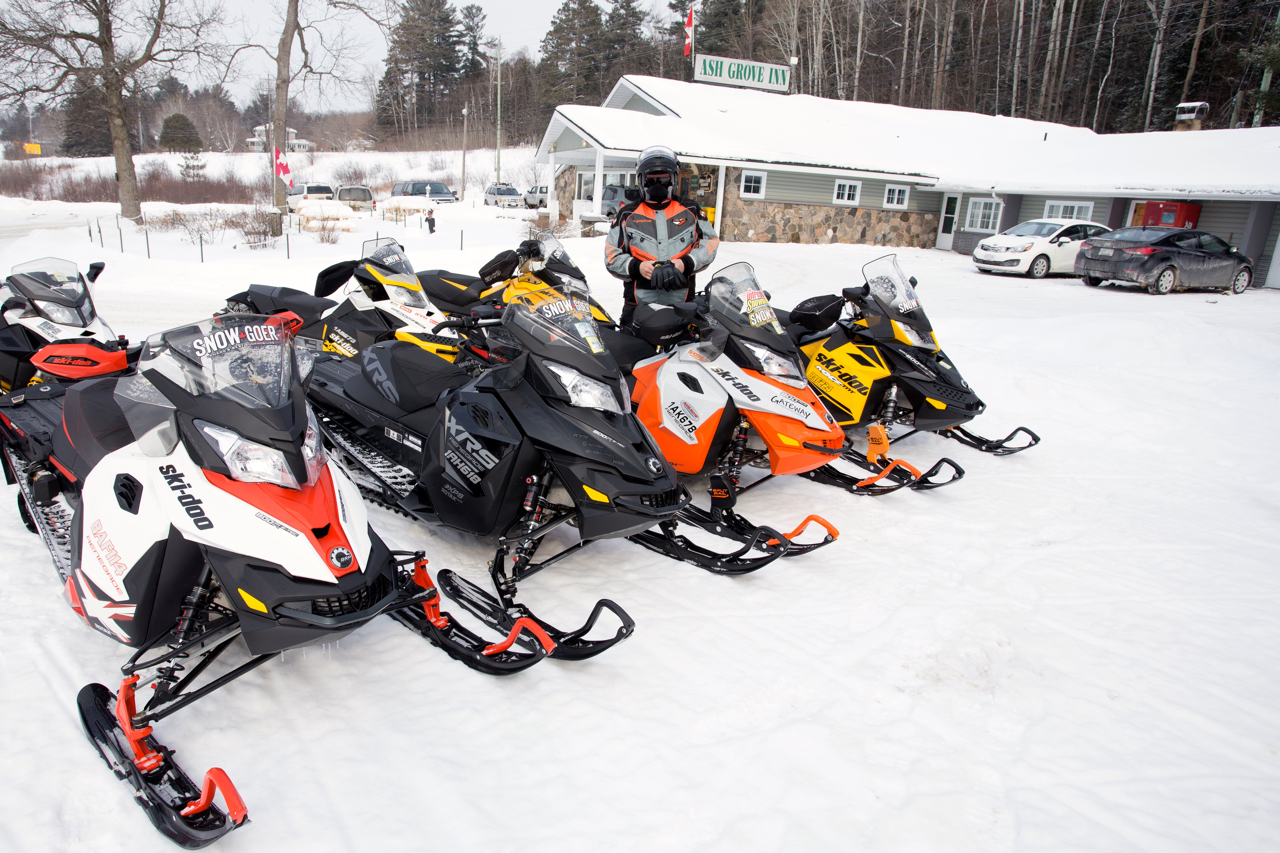 We chose the Ash Grove Inn to venture out on our daily sojourns into unfamiliar territory for Barry’s Bay Ontario snowmobiling.This classy and comfortable lodging sits at the south end of town on TOP E109. It has an onsite restaurant with tasty food. There’s also plenty of truck parking, sled parking in front of rooms (both motel style and spacious suites with whirlpool tubs) and super friendly staff. 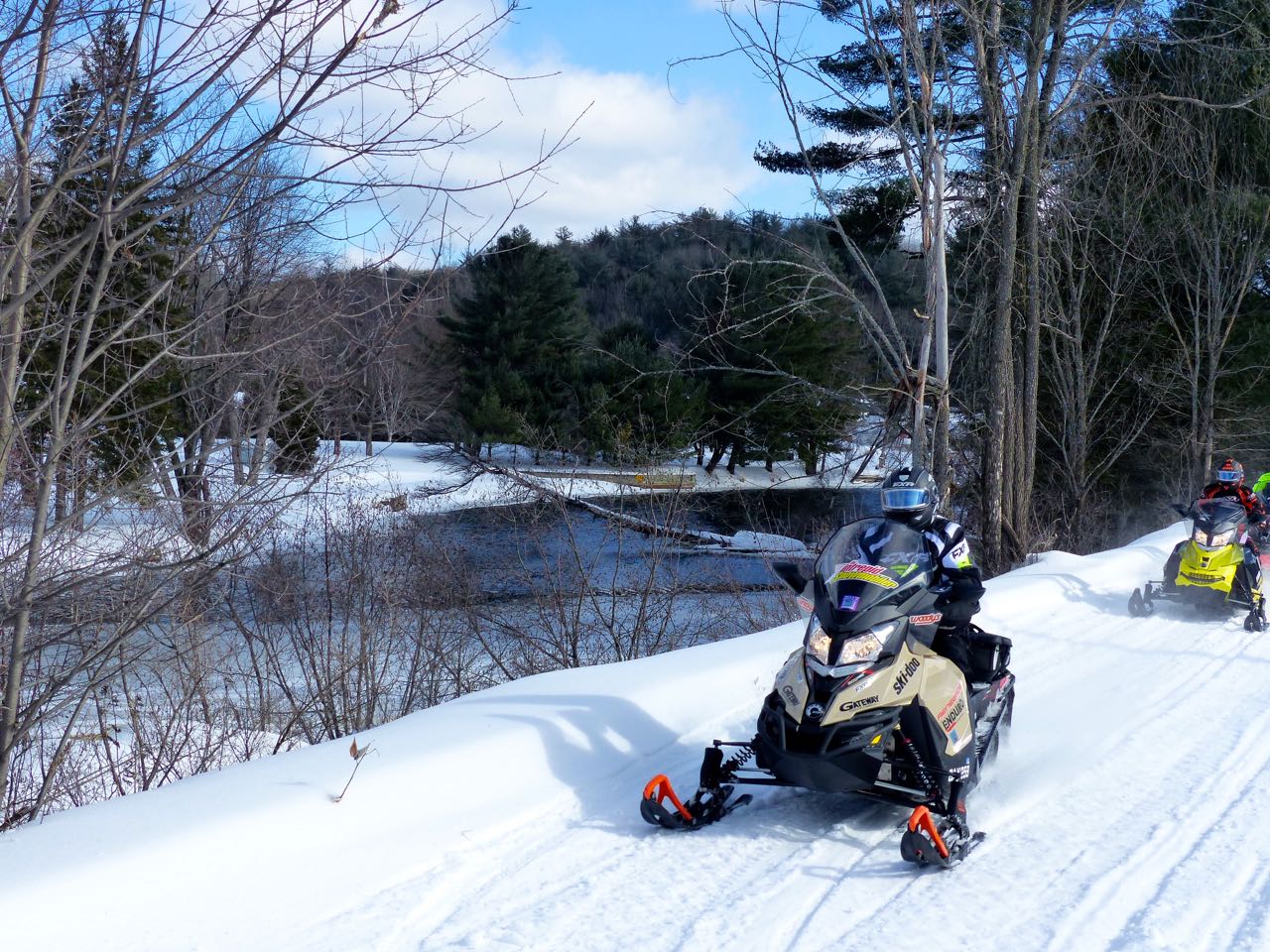 Barry’s Bay is a good launch point for the RAP (‘Round Algonquin Park) Tour. It’s also an ideal home base for regional Ontario snowmobiling meanderings that make you feel like you’re experiencing everything for the first time. For example, on one day of Barry’s Bay Ontario snowmobiling we set off with no specific destination in mind. We wandered from one freshly groomed trail to another, exploring wherever those table top corridors led us.

On another, we set out to reconnoitre as many of the Ontario snowmobile trails trails maintained by the Opeongo Snowbirds, Peterson Pathfinders and Maple Leaf Snow Skimmers snowmobile clubs as possible. We came across some real gems such as trails 155, 162, 175, 178 and 179. Along the way, our wanderings also led us to discover many points of interest. They include Spectacle Lake Lookout (Club Trail 159) and Tom’s Lookout (Club Trail 162), as well as the old train stations in Maynooth, Bancroft and Barry’s Bay. While Barry’s Bay Ontario snowmobiling, we also took in the beautiful ride along the Madawaska River and the scenic Hastings and Madawaska Highlands. 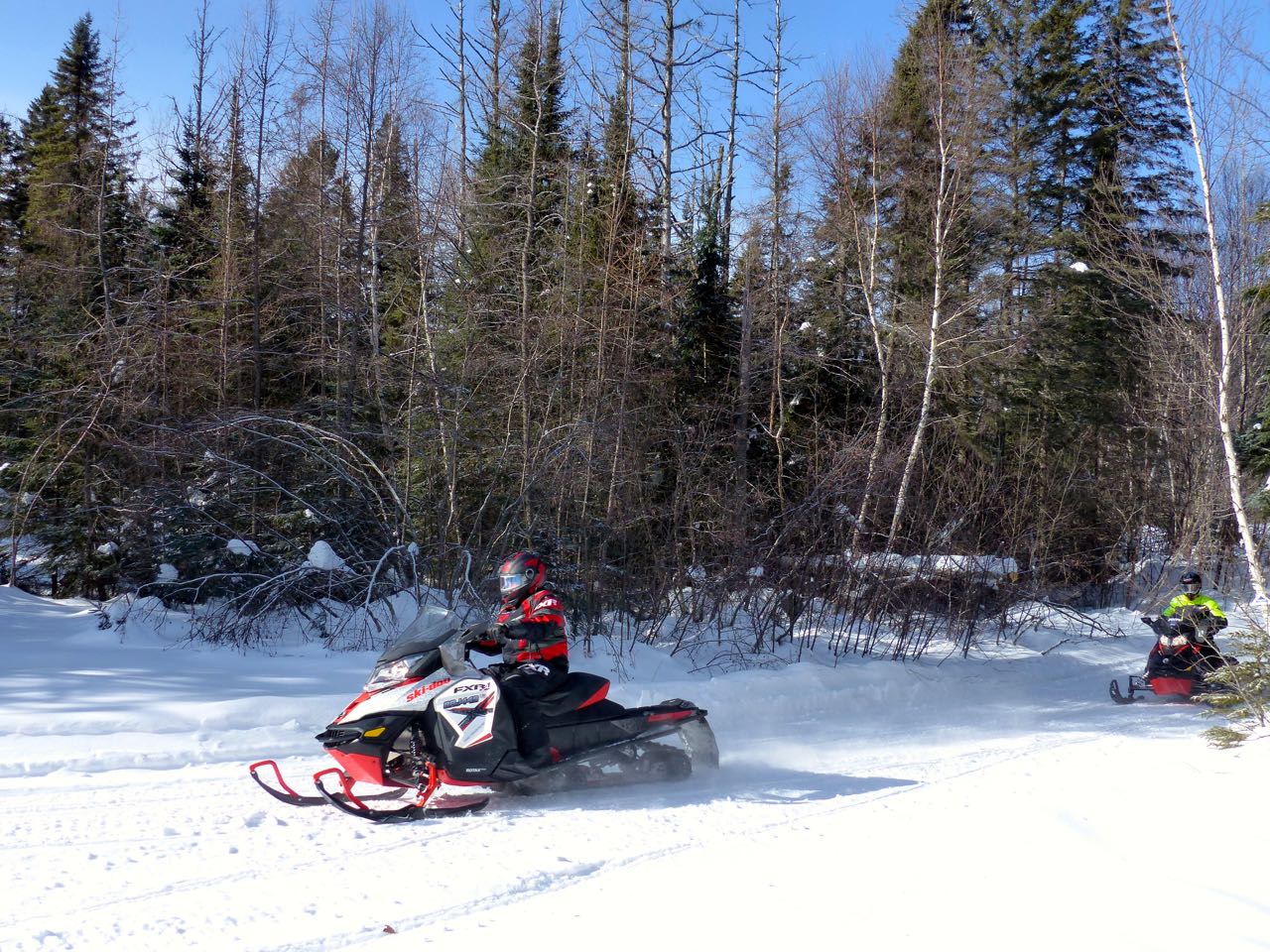 Rack Up The Miles Around Barry’s Bay

But Barry’s Bay Ontario snowmobiling is also a good choice if your primary interest is racking up some serious kilometres. This is thanks in part to the area’s combination of old logging roads, rail trails and utility corridors. Whitney, Bancroft and even Haliburton, as well as Pembroke and Renfrew in the Ottawa Valley, make for good, long distance, day ride loops out of Barry’s Bay. You can even check out the new 1200’ bridge to Quebec just north of Beachburg, just off TOP B. Best of all, fuel is never a worry in this Ontario snowmobiling paradise. Trail accessible stations are marked by ‘gas pump’ symbols on the Snow Country District 6 Trail Guide.