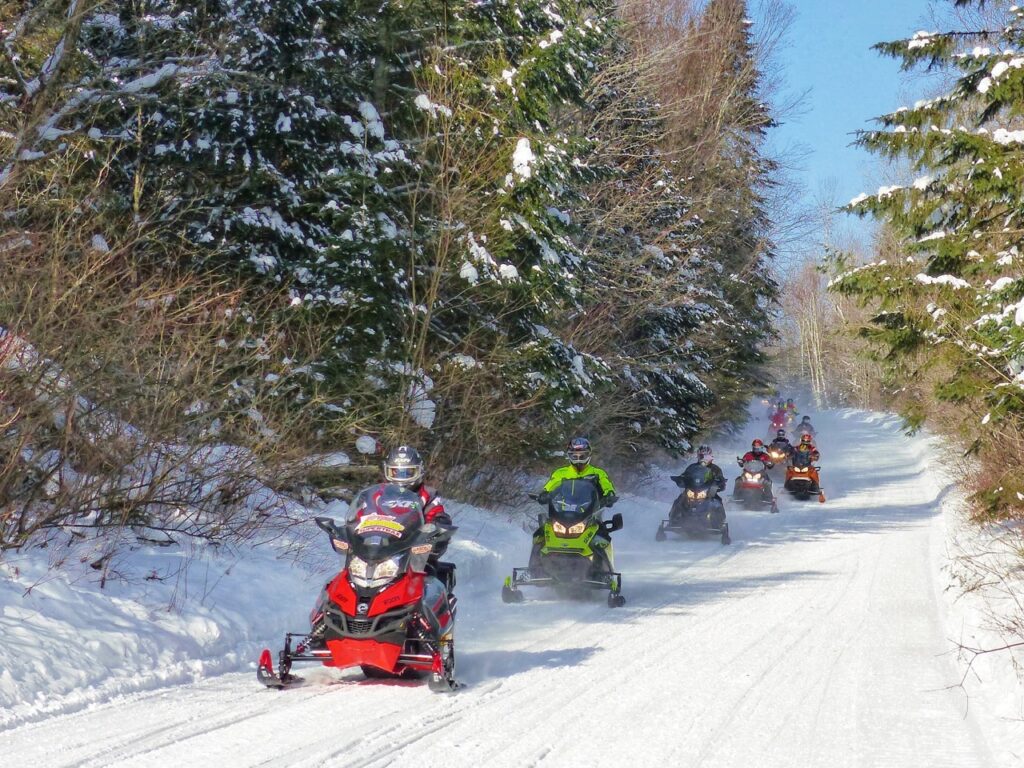 I donned my TekVest before penning this politically incorrect blog about the Ontario snowmobile speed limit. I’m opening a controversial can of worms. So I fully expect a slew of darts and arrows to speed my way. Hopefully, there’ll be a few kudos too. So here goes…

There are already radar traps on some snowmobile trails. And I’ve even heard the somewhat ludicrous notion of trail speed enforcement from the air! So maybe it’s time to take a look at the big elephant in the room when it comes to Ontario snowmobiling.

No one wants to talk about the 50-km/h maximum trail speed limit. That’s how high up has been for as long as I can remember. Probably set way back when a snowmobile hardly had the capability of reaching the speed of a lawn mower. Much less maintaining that pace before blowing a belt, fouling a spark plug or shaking the living daylights out of its rider.

But does 50 km/h for today’s smooth trail riding and high tech sleds still make sense? I think it’s worth revisiting. But I’m not advocating a speed-frenzy free-for-all. So as they say, don’t shoot the messenger… 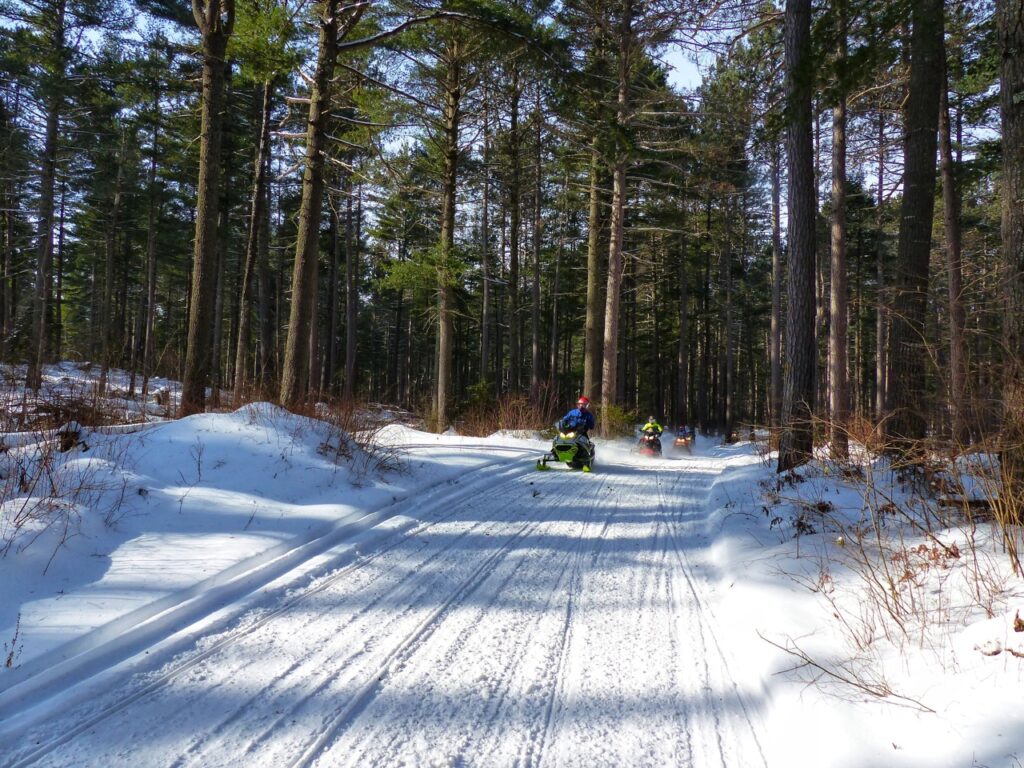 I did a quick online check of the trail speed limit in popular stateside destinations. It reveals a range (converted from miles to metric) from 81 km/h in Minnesota, to 91 in Wisconsin & New York. Meanwhile, Michigan has a night time limit of 91 km/h with no daytime max that I could find. Maybe this is why if you ask many American snowmobilers, the Numero Uno reason for NOT visiting Ontario is the low maximum speed limit for trail riding.

Snowmobile Speed Limits in Other Provinces 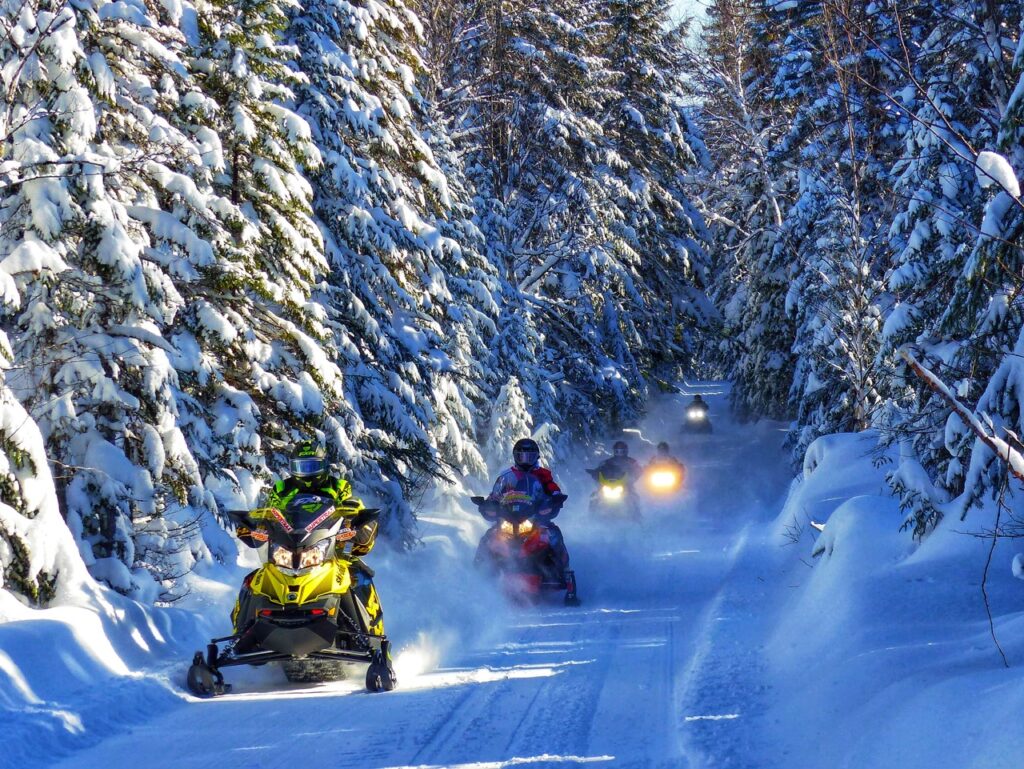 Among Canada’s major trail riding provinces, Saskatchewan has a maximum speed limit of 80 km/h. Meanwhile, New Brunswick has no snowmobile speed limits (neither do Alberta, Manitoba or Nova Scotia). Quebec has graduated trail speed limits of 70 km/h overall. But that drops to 50 km/h within 100 metres of a dwelling or 30 km/h within 30 metres. Ontario’s blanket 50 km/h seems pretty anaemic by comparison.

It’s noteworthy, however, that many jurisdictions on both sides of the border have another enforcement proviso. With it, police can charge a snowmobiler for riding “too fast for conditions” and/ or “for careless or reckless operation of a snow vehicle.” So excessive, dangerous or uncontrolled speeding can still be penalized.

Does Current the Ontario Snowmobile Speed Limit Save Lives? 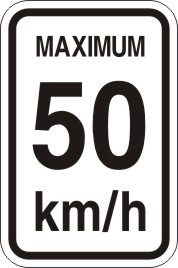 So maybe Ontario’s 50-km/h max is about saving lives. Certainly excessive speed is a contributing factor in many deaths, often combined with impairment and/or riding after dark. But a cursory scan of snowmobile fatalities in the destinations listed above suggests that higher speed limits don’t necessarily mean more fatalities. In fact, many states have lower per capita tragedy numbers than Ontario. This despite higher speeds limits and generally more traffic on their trails. Yes, speed can kill, but it’s usually excessive speed far faster than any of the speed limits noted above.

So Why Is the Ontario Snowmobile Speed Limit Stuck at 50? 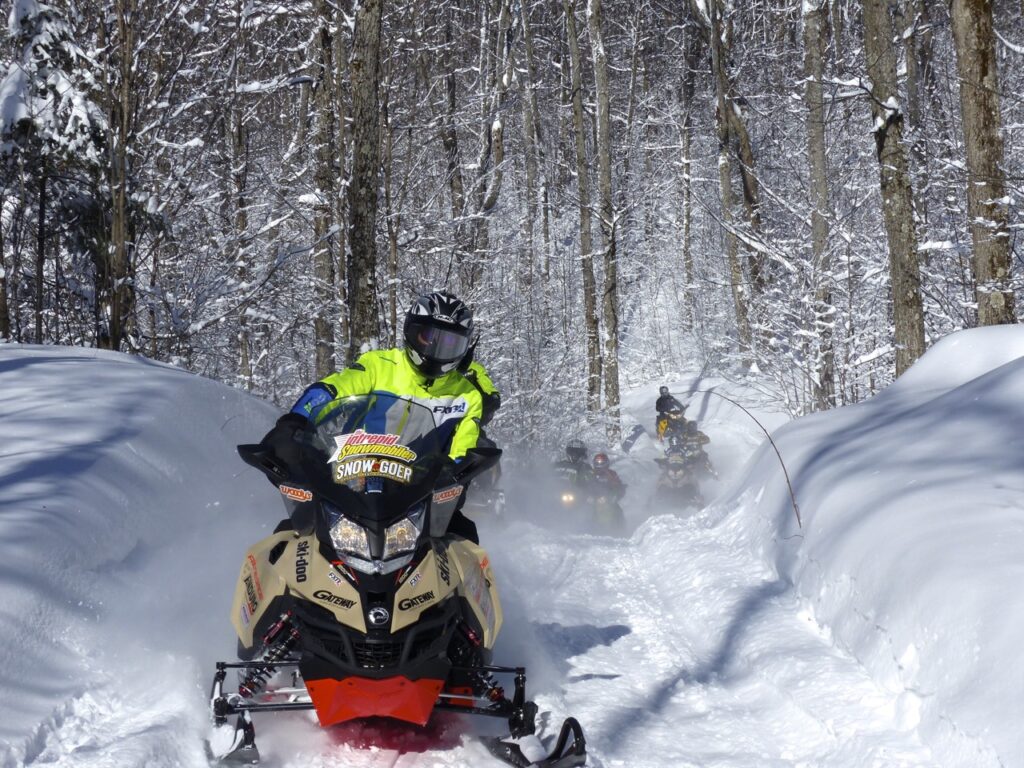 This maximum became law when most snowmobiles were the equivalent of a Model-T Ford. Not the ultra high tech marvels of today. And back then, Ontario trails were more like goat paths than the maintained super corridors we now enjoy. One might think that such advances and improvements would trigger reconsideration of the maximum Ontario snowmobile speed limit.

But no such luck. Our lackadaisical Ontario snowmobile speed limit remains in force. Likely due to a combination of inertia, lack of political will and no coordinated advocacy from trail users to change it. And even at 50, there are serious risk management and liability concerns in these litigious times. Or maybe like on our highways, many travel faster on trails than the posted speed anyway, so what’s to change? When was the last time you rode at 50 on today’s rail trails, logging roads or utility corridors?

Certainly the history of Ontario highway speed limits doesn’t provide much hope for change. In the early 1920’s, the road speed limit was 40 km/h. But by decade’s end it had increased to a whopping 56. By 1937, it went to up 80 km/h. And then in 1959, the speed for a new generation of highways and automobiles was capped at 100.

It’s been stalled there until recently, in theory if not in practise. (Except for a brief upward blip to 115 km/h in the sixties that was clawed back for fuel saving during an energy crisis and never re-instituted.) Now Ontario is raising the maximum speed to 110 km/h on some select sections of 400 series highways. So maybe change is in the wind. Of course, speed limits remain lower on other public roads and city streets.

What About A Graduated Ontario Snowmobile Speed Limit? 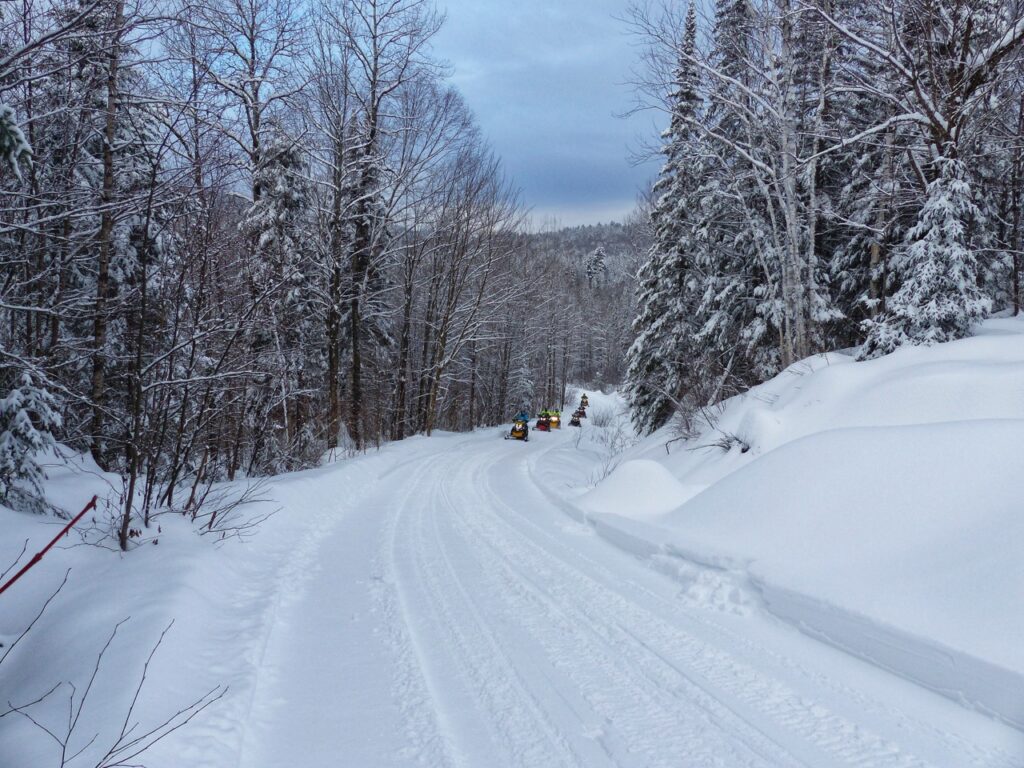 Don’t get me wrong. I’m not advocating unlimited speed on snowmobile trails. And certainly not excessive or uncontrolled speed. Care & control should always be top of mind. Of course, we all know that there are some trails that you’d be hard pressed to do 50 on. We also know that there are trails where topping out at 50 is ludicrous. But let’s face it. If the 50-km/h max was ever rigidly enforced, many of us would sell our snowmobiles to take up something zippier like snowshoeing.

So why not consider graduated trail speed limits like those for automobiles on our roads or Quebec trails? The precedent for snowmobiling is already in place here. Ontario’s 50 km/h max applies to sleds in most places here. But it drops to 20 km/h max on roads where sleds are allowed and the speed limit for autos is 50 km/h (subject also to applicable municipal bylaws).

But with the newly increased 400 series highway speeds, isn’t the precedent also set to at least consider raising the max on some selected snowmobile trails? 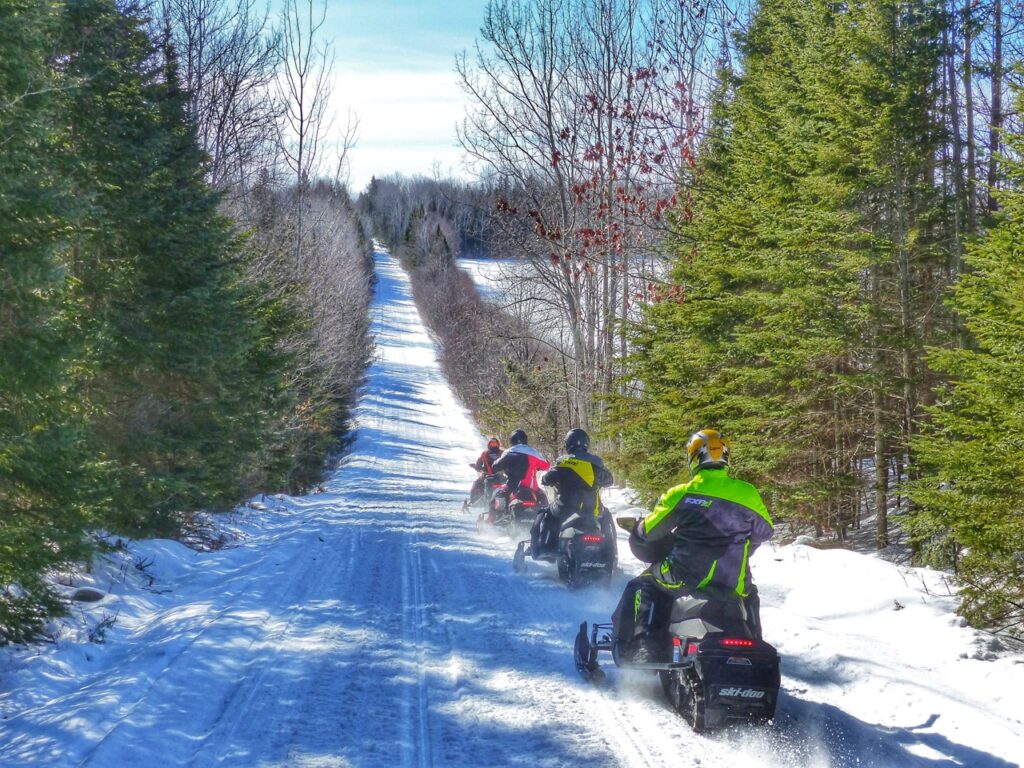 So what about raising the snowmobile speed limit to 70-km/h max on some trails? Like those that run on abandoned rail lines, logging roads and utility corridors where sight lines are long? Stick with 50 maximum on twisty forest and bush trails with more restricted sight lines. And consider a lower max wherever a snowmobile trail approaches and passes through a community with frequent road crossings and nearby houses. Yes, all of this would require careful implementation. But it’s not an insurmountable challenge. After all, we already do it for our public roads.

Ramifications of Strict Enforcement of 50km/h

Today, snowmobiling exists in an uneasy and uncertain truce with law enforcement agencies. Much like with automobiles on our roads and highways, there’s some unspoken leeway about driving reasonably over the limit. However, police could start strictly enforcing the letter of the law for the existing Ontario snowmobile speed limit at any time. If that happens, it could sound the death knell for snowmobiling as we know it.

Permit sales could plunge. The $1.7 billion annual winter tourism impact snowmobiling brings to Ontario each winter could drop. And many of us would take our winter fun elsewhere, to destinations with more sensible speed limits like Quebec and Michigan. The east-west highway 401 would quickly replace the north-south 400 & 11 as our primary trailering route.

Then speed-related snowmobiling fatalities in Ontario would certainly decrease. Not because 50-km/h is safer. But because the number of riders snowmobiling here would plummet. How is that outcome good for our future?

Whatever the Ontario snowmobile speed limit, the rules for safe trail riding don’t change. Riding with care and control according to conditions and within your abilities. Snowmobiling defensively, not taking unnecessary chances. And making smart choices like sticking to the right side of the trail. And always remember, you are your own throttle controller and speed limiter – so let’s just bring Ontario snowmobiling into the 21st century!