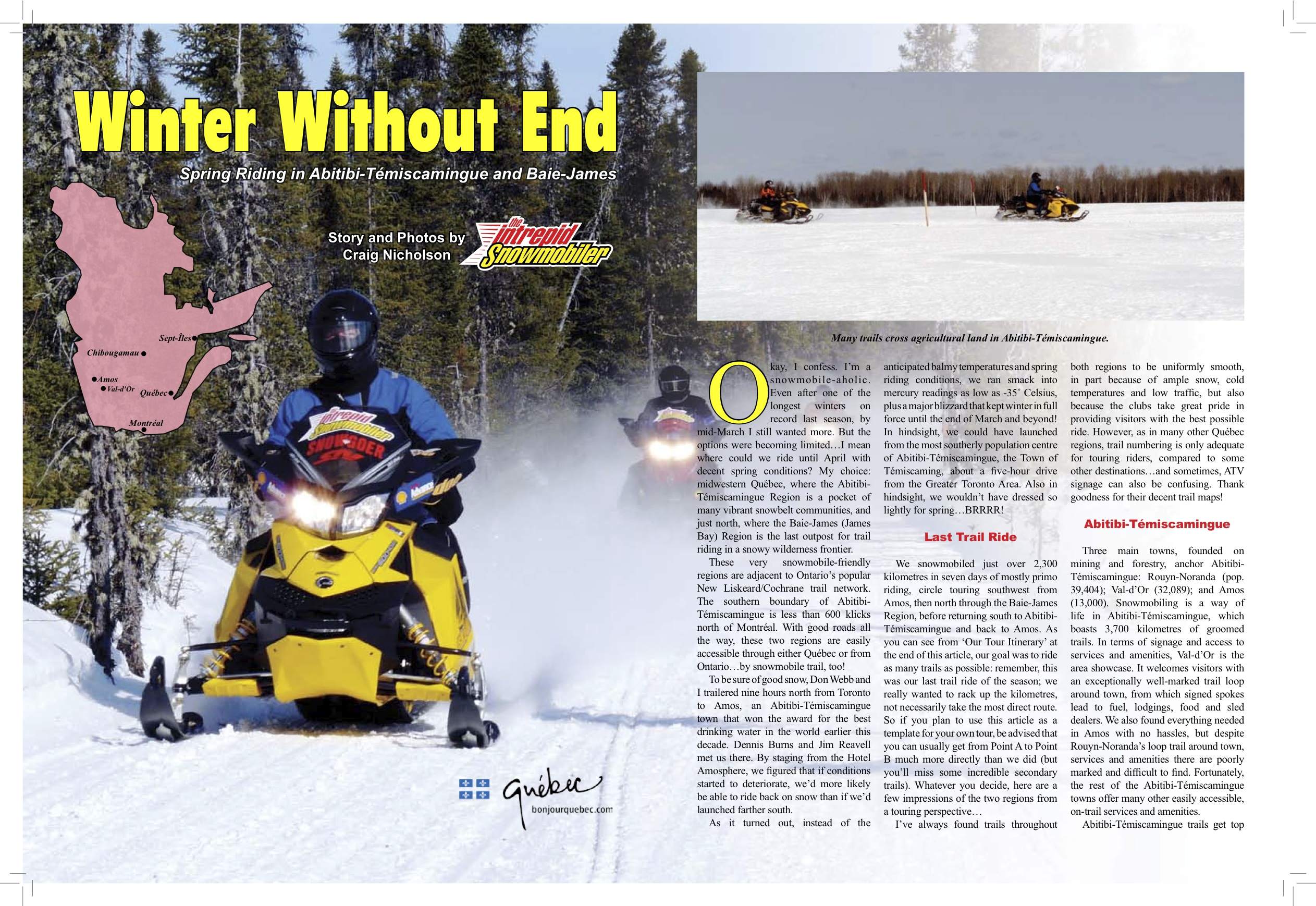 Why not snowmobile Snowmobile Abitibi Temiscamingue Baie James for your next Quebec snowmobile tour or snowmobile vacation? Okay, I confess. I’m a snowmobile-aholic. Even after one of the longest winters on record last season, by mid-March I still wanted more great snow conditions. But the options were becoming limited…I mean where could we ride until April for decent spring riding?

My choice: midwestern Québec snowmobiling, where the Abitibi-Témiscamingue Region is a pocket of many vibrant snowbelt communities, and just north, where the Baie-James (James Bay) Region is the last outpost for trail riding in a snowy wilderness frontier. Meanwhile, if you’re looking for more great Quebec snowmobile tour destinations to explore on your snow machine, check out the rest of my Quebec tours for various snowmobile magazines.

These very snowmobile-friendly regions are adjacent to Ontario’s popular New Liskeard/Cochrane trail network. The southern boundary of Abitibi-Témiscamingue is less than 600 klicks north of Montréal (see snowmobile video above). With good roads all the way, these two regions are easily accessible through either Québec or from Ontario…by snowmobile trail, too!

To be sure of good snow conditions for our Quebec snowmobiling, Don Webb and I trailered nine hours north from Toronto to Amos, an Abitibi-Témiscamingue town that won the award for the best drinking water in the world earlier this decade. Dennis Burns and Jim Reavell met us there. By staging from the Hôtel Amosphere, we figured that if snow conditions started to deteriorate, we’d more likely be able to ride back on snow than if we’d launched farther south for our snowmobile magazine tour.

As it turned out, instead of the anticipated balmy temperatures and spring riding conditions, we ran smack into mercury readings as low as -35˚ Celsius, plus a major blizzard that kept winter in full force until the end of March and beyond! In hindsight, we could have launched from the most southerly population centre of Abitibi-Témiscamingue, the Town of Témiscaming, about a five-hour drive from the Greater Toronto Area. Also in hindsight, we wouldn’t have dressed so lightly for spring snowmobiling in Quebec…BRRRR!

Last Trail Ride Of The Season

We snowmobiled just over 2,300 kilometres in seven days of mostly primo riding on our Quebec snowmobile tour, circle touring southwest from Amos, then north through the Baie-James Region, before returning south to Abitibi-Témiscamingue and back to Amos. As you can see from ‘Our Tour Itinerary’ at the end of this article, our goal was to ride as many trails as possible: remember, this was our last trail ride of the season; we really wanted to rack up the kilometres, not necessarily take the most direct route.

So if you plan to use this article as a template for your own Quebec snowmobile tour, be advised that you can usually get from Point A to Point B much more directly than we did (but you’ll miss some incredible secondary trails). Whatever you decide, here are a few impressions of the two regions from a touring perspective…

I’ve always found the FCMQ trails throughout both regions to be uniformly smooth, in part because of ample snow, cold temperatures and low traffic, but also because the clubs take great pride in providing visitors with the best possible ride. However, as in many other Québec regions, trail numbering is barely adequate for touring riders, compared to some other destinations…and sometimes, ATV signage can also be confusing. Thank goodness for their decent trail maps!

For more on this Quebec snowmobile tour, read my Abitibi-Témiscamingue Baie-James article as published in Snow Goer Canada Magazine.