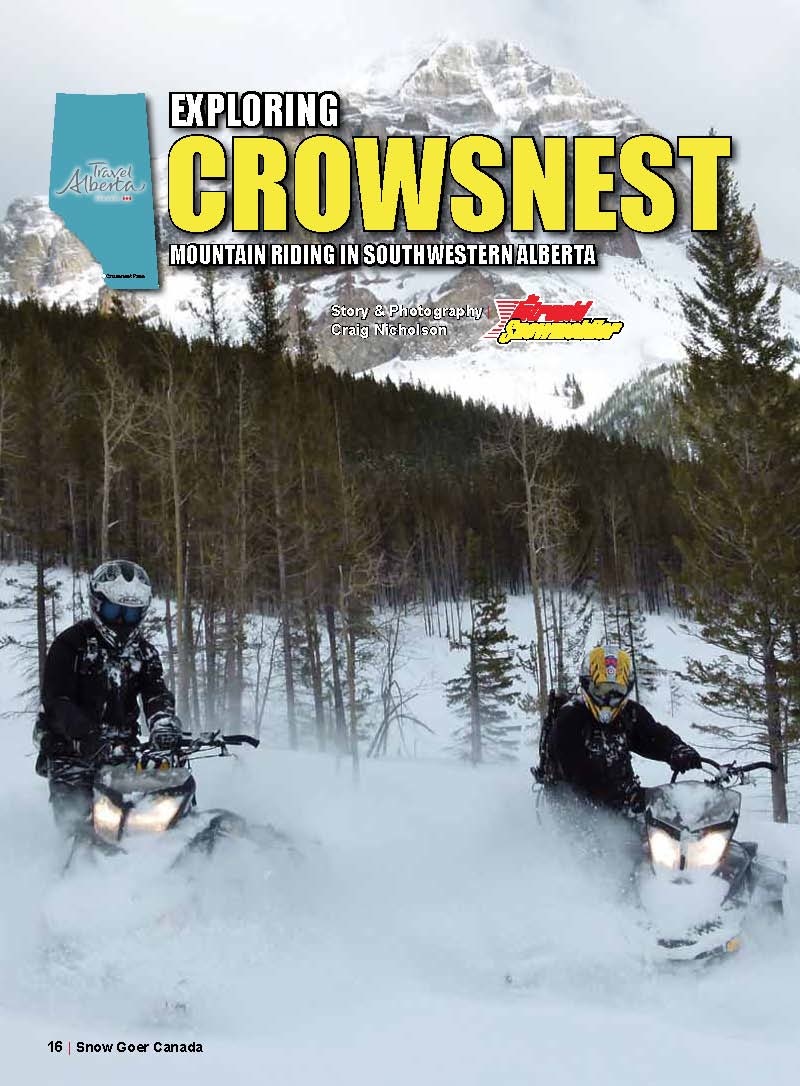 We rode our Ski-Doo Summit snow machines in fresh powder every day to snowmobile Crowsnest Pass Alberta on our snowmobile vacation. More snow fell each night, blanketing the play areas like soft, thick comforters. The site reminded me of flying an airplane just above an unbroken mass of fluffy white clouds as far as the eye can see. Everything was deeply covered, with terrain contours obscured and smoothed by the billowy snow.

Our snowmobiles sliced through that white stuff like hot knives through butter. We carved our way along snow-covered trails and across endless backcountry. The sensation was otherworldly – like floating on bottomless feather mattress. It cushioned us with gentle whooomphs. It whooshed snow over our hoods and heads until we looked like little snowmen. I felt like a kid again, playing in the snow with my friends… 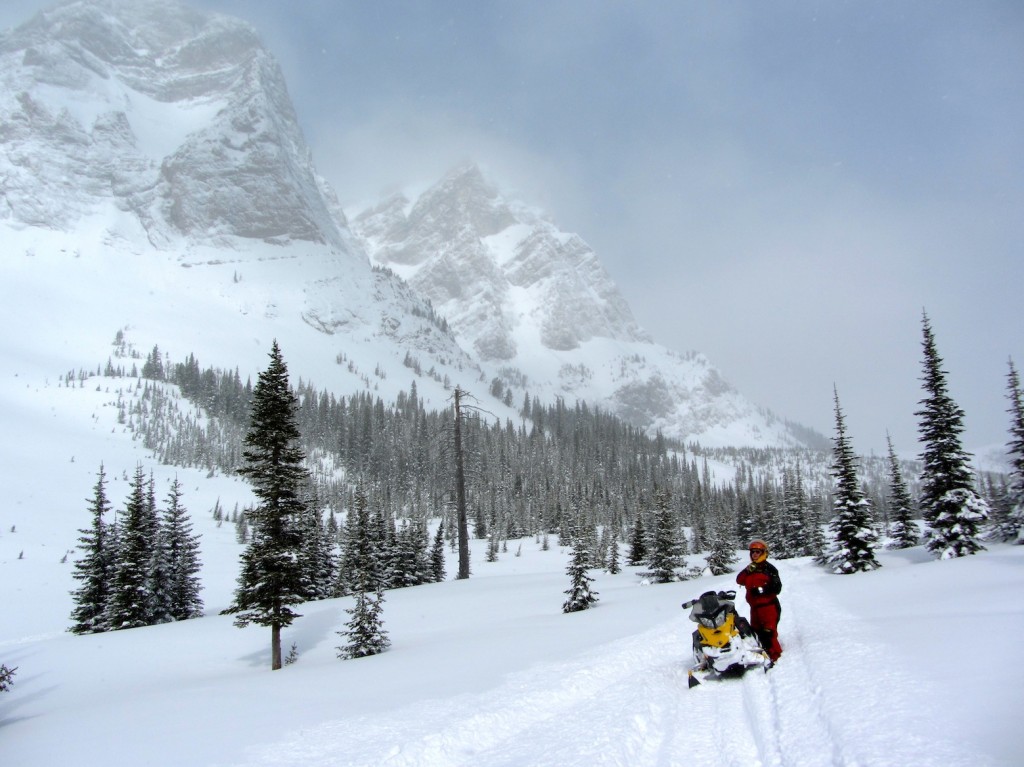 Even after some mountains loomed white on the horizon, it was still hard to imagine good snowmobiling anywhere, Especially when the streets and lawns of Crowsnest Pass itself were also brown. I can understand why some snowmobilers might drive on through town searching for snow elsewhere. But that would be a big mistake. There’s really no need to drive any farther than Crowsnest. Because the snow is usually no more than a few minutes up the hill. Or in our case, newly fallen right outside our door each morning! 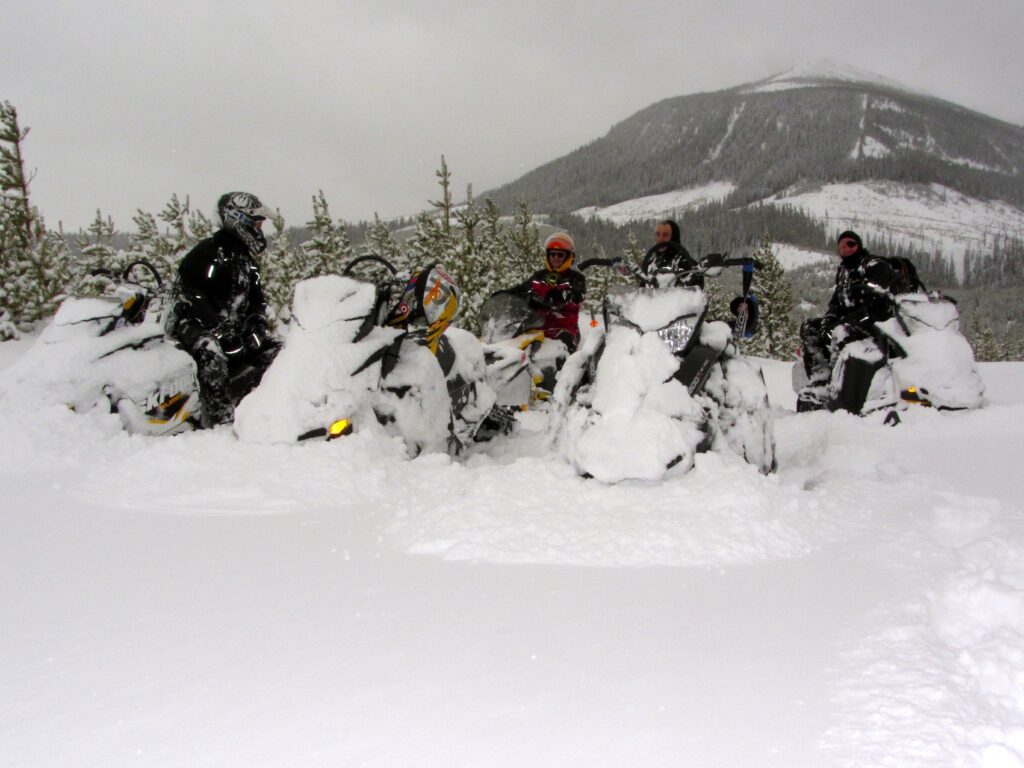 Riding in “fresh” is a mountain rider’s dream come true. So it was amazing to watch the easy way our guides, Joe Trotz, Doug Cox, Don Forsyth and Andrew Bokkel, cut their snow machines through the powder. They looked as natural, graceful and effortless as ballet dancers. Constantly switching from side to side, they were one with their sleds. They balanced on the running boards, manoeuvring with body English. But their level of skill and agility is foreign to many flatlanders like me. That’s because we sit most of the time on our sleds. I tended to flounder along more like a walrus in waves than a seal slipping through water. 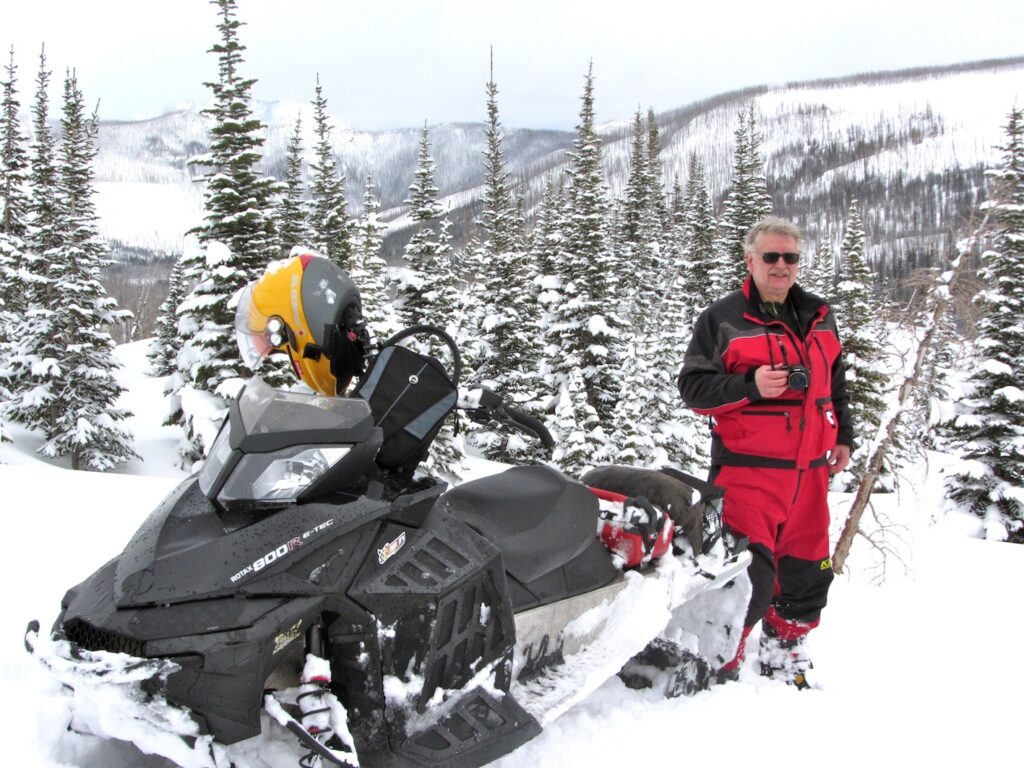 Don’t get me wrong. It was always great fun. And I did improve marginally over the four days of our Alberta snowmobile tour. Just not enough to keep these guys in sight! I also learned a whole lot about getting stuck – and unstuck. Did I say stuck? Buried would be more like it. Even with our Summits’ 154” tracks, 2 ¼” paddles and 800R E-TEC engines, Glenn King and I managed to entomb them numerous times. It was as if our mission was to hit bottom, instead of floating over the top.

Fortunately, we were riding with experts at getting unstuck. They made that chore much easier than it otherwise would have been. I will note that while our guides didn’t get stuck often themselves, their interments were far worse than mine. Largely because they are sufficiently skilled to avoid all but most difficult sled traps. Then it was helmets off and sweat on!

Riders should reconfirm the routes and services mentioned in this Alberta snowmobile tour article as they may have changed since publication.