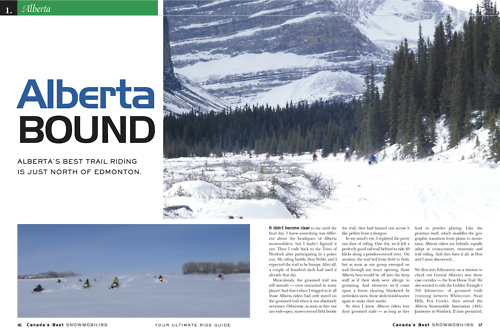 When I took time to snowmobile Central Alberta,  it didn’t become clear to me until the final day. I knew something was different about the headspace of Alberta snowmobilers, but I hadn’t figured it out.

Then I rode back to the Town of Westlock after participating in a poker run. My riding buddy, Don Webb, and I expected the trail to be bumpy. After all, a couple of hundred snow machines had used it already that day of Central Alberta snowmobiling.

Miraculously, the groomed trail was still smooth — even untracked in many places! And that’s when I twigged to it: all those Alberta snowmobilers had only stayed on the groomed trail when it was absolutely necessary. Otherwise, as soon as they saw any wide-open, snow-covered field beside the trail, they had fanned out across it like pellets from a shotgun.

In my mind’s eye, I replayed the previous days of riding on our Alberta snowmobile tour. One day, we’d left a perfectly good rail-trail behind to ride 40 klicks along a powder-covered river.  On another, the trail led from field to field, but as soon as our group emerged on trail through any fence opening, those Alberta boys would be off into the deep stuff as if their snow machines were allergic to grooming. And whenever we’d come upon a forest clearing blanketed by unbroken snow, those sleds would scatter again to make their marks.

So now I knew. Alberta riders love their groomed trails — as long as they lead to powder playing. Like the province itself, which straddles the geographic transition from plains to mountains, Alberta riders are hybrids, equally adept at cross-country, mountain and trail riding. And they have it all, as Don and I soon discovered on our Alberta snowmobile tour…

Riders should reconfirm the routes and services mentioned in this Alberta snowmobile tour article as they may have changed since publication.