Why It’s Important To Remove Snow From Trailer Roofs… 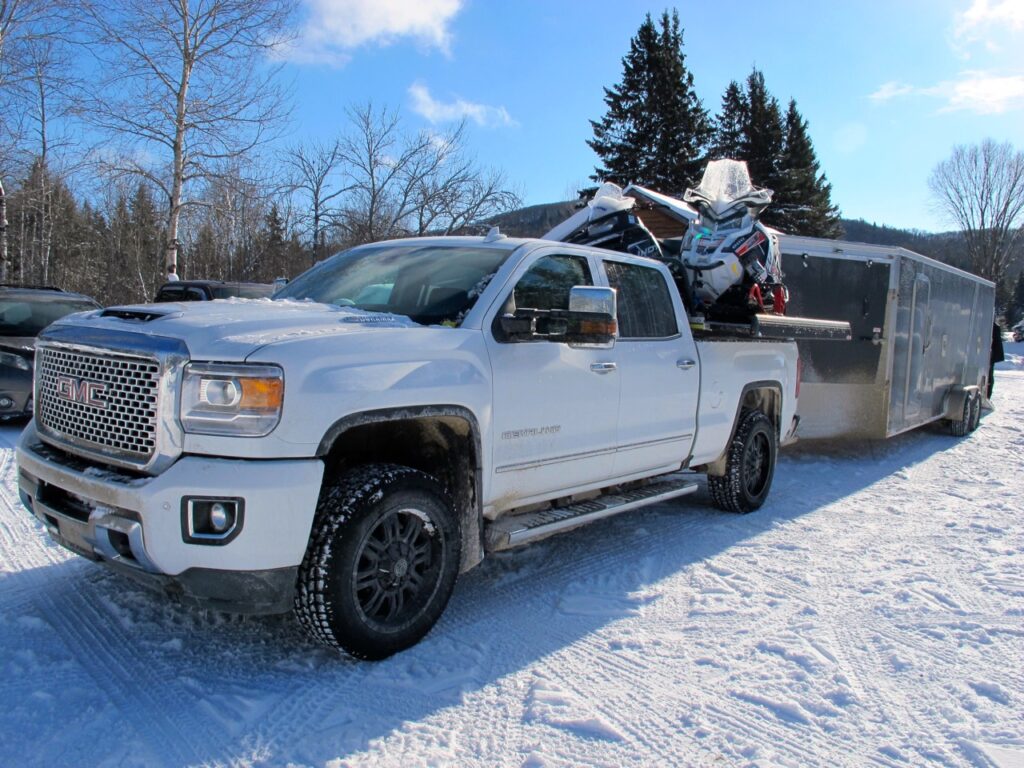 Have you ever left your enclosed trailer parked for several days? Only to return to find it covered in snow? Here’s the reason you should remove it before driving away. Regardless of trailer size, snowmobile trailer roof snow overload can be dangerous… 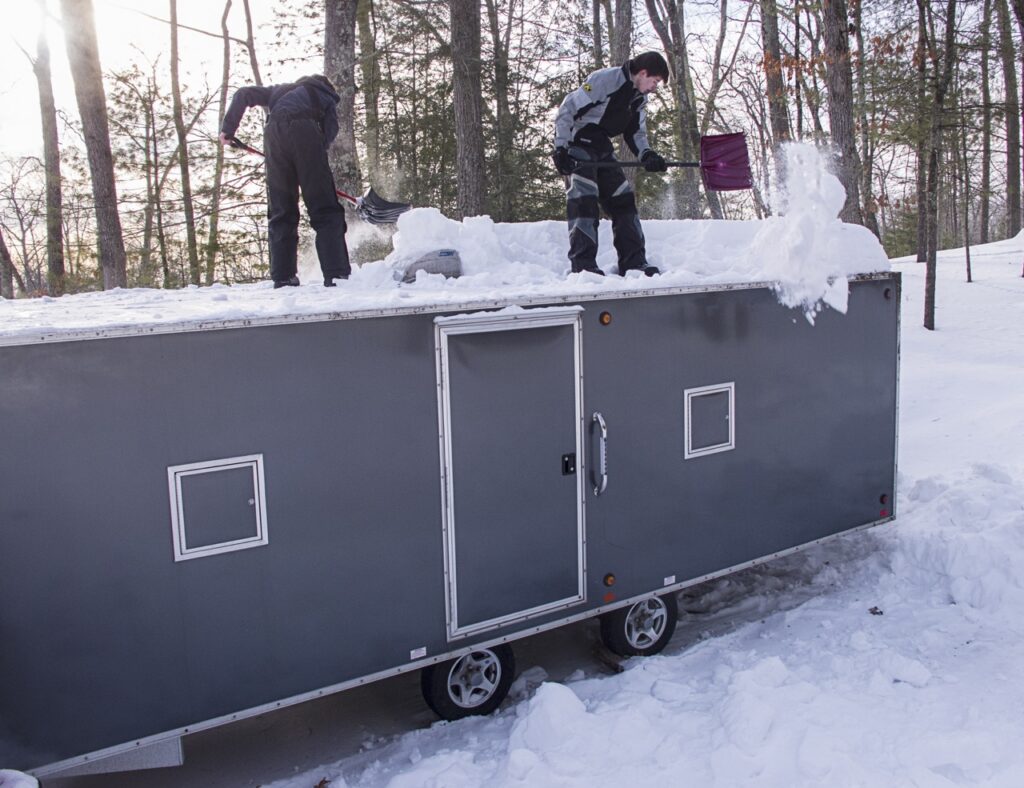 One winter, we had a few small storms followed by a good 18-inch dumper. While hooking up the trailer, I became a bit concerned about all the snow on its roof. Snow could fly off while trailering to injure those in vehicles behind. Besides it’s illegal and could earn a magic ticket.

So we dutifully climbed onto the trailer roof and shovelled about two-feet of compiled snow from that 8×22-foot rolling aluminium shed. It was slick underneath that snow. A good inch of ice had formed from thawing and refreezing of earlier snow cover. 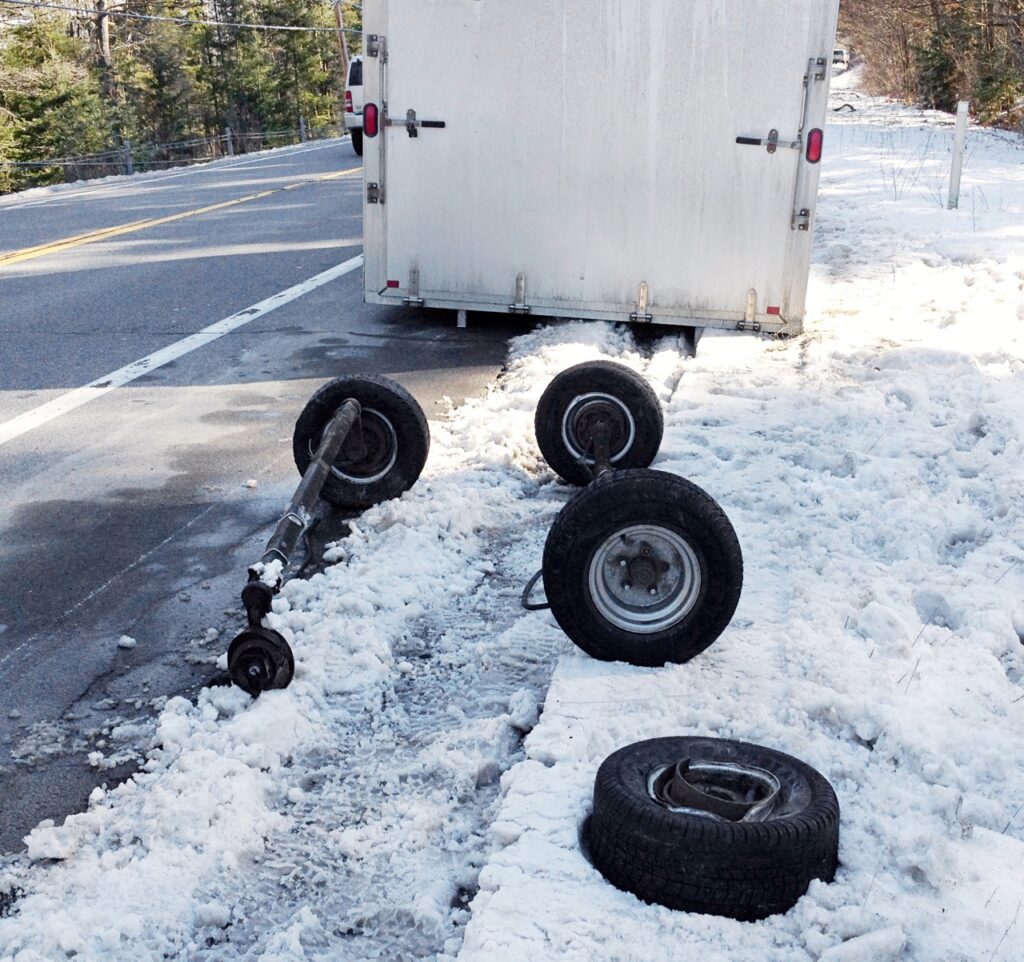 While unloading at our destination, another four-place trailer arrived and parked next to us. Its owner complemented us for shovelling off the roof. He then went on to explain how he found out the hard way that it was a necessary chore. I figured he got ticketed.

Surprisingly, that would have been a wet kiss on the lips by Kate Upton compared to the major mechanical failure he suffered. It seems the excess weight of snow on his roof had overloaded the trailer’s maximum Gross Vehicle Weight Rating (GVWR) and snap went the axles. As unbelievable as that sounds, the math doesn’t lie… 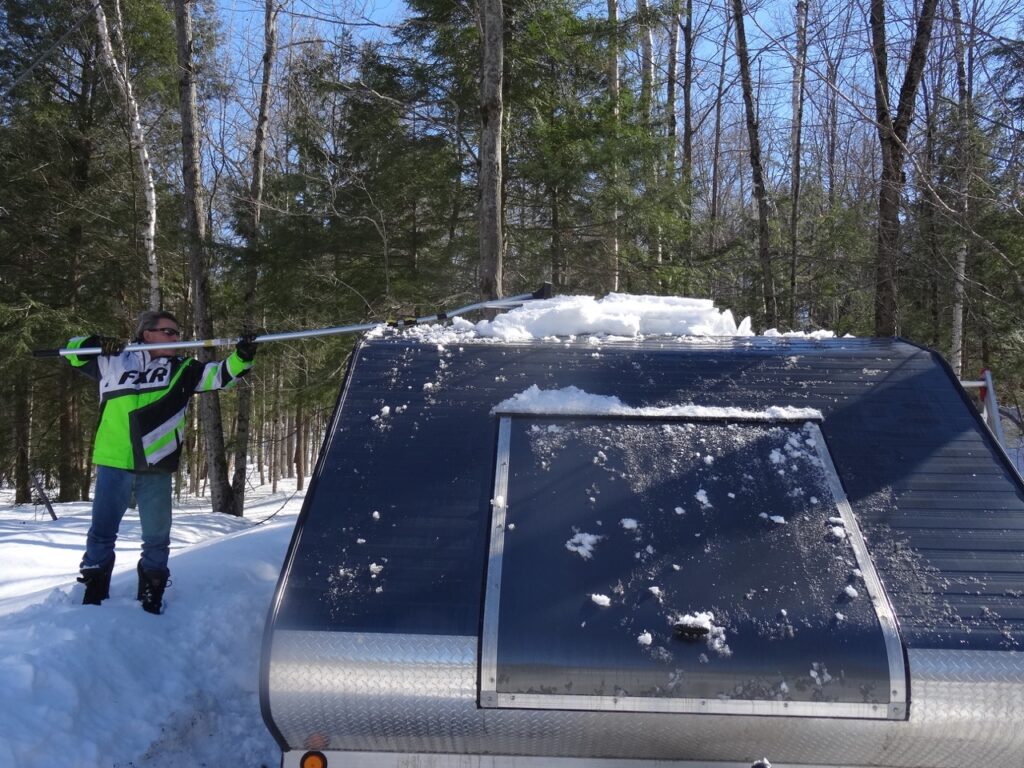 My dual-axle four-place snowmobile trailer has a Gross Vehicle Weight Rating (GVWR) of 7,000 lbs. (two axles at 3,500 lbs. each). Its dry weight is 2,500 lbs., fully equipped with options. That leaves a 4,500-lb payload capacity, which is more than enough. Check your trailer specs, as there are major variations of GVWR between makes and models.

I figure each sled, fully loaded with accessories, fuel, oil and filled trunk bag hit the scales at around 625 lbs. That’s according to published reports that actually weigh sleds. We’re talking 2,500 pounds of sleds. And that doesn’t even count all the snow stuck in the tunnel from the last ride.

Also, we typically throw our riding gear in the trailer during a trip. So I’d estimate about 25 lbs. per person, for another 100 lbs. In addition, we have tools, a few gallons of oil, spare carbides, and a 5-gallon gas can. Plus other odds and ends that easily total 250 big ones. Loaded for a road trip, my trailer has 1,650 lbs. of reserve capacity left. Excellent, we can take the baby elephant, too! 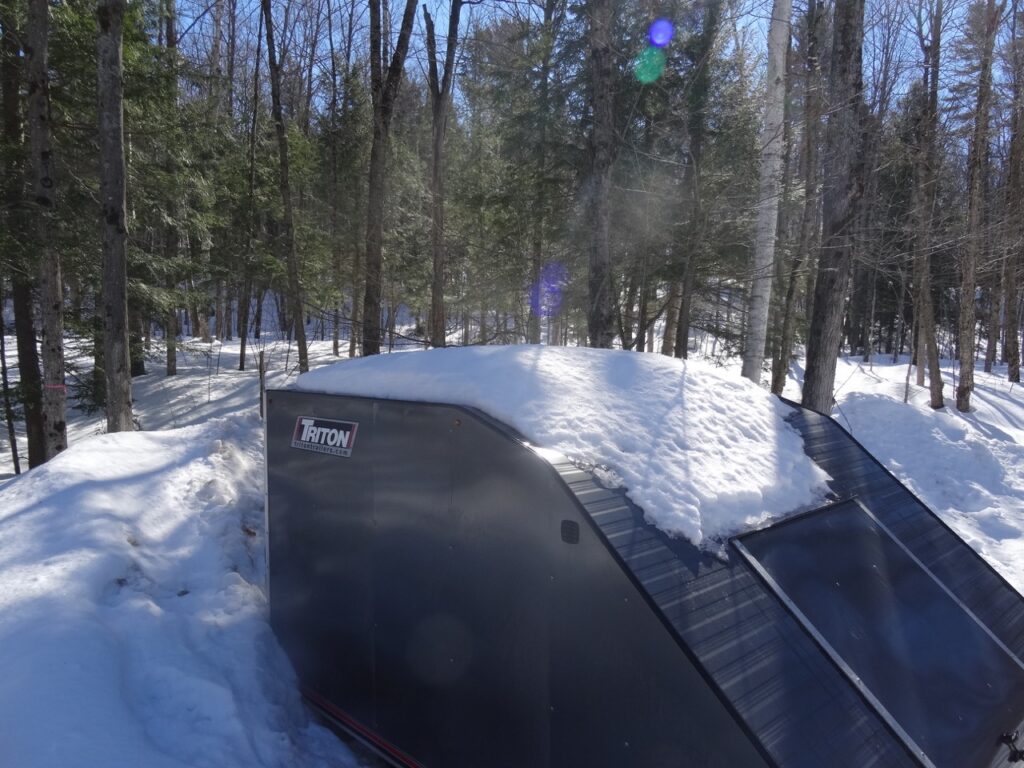 Snow consistency varies from fluff to wet cement. But most experts agree a cubic foot of settled snow weighs 15 lbs., on average. My shovel agrees. So if the area of the trailer roof is 187 sq. ft. that means a foot of snow adds an additional 2,805 lbs. of worthless ballast. Dangerous is a better term, as the trailer is now overweight by more than 1,000 pounds.

Now factor in that inch of ice, at 21lbs per square foot. That’s another 888 pounds. We are now overweight by the equivalent of one 1993 Mazda Miata!

Not only are the axles over the limit. But so are the tires and brakes. Hold on to that steaming cup of Joe. Why? Because you may have also unwittingly exceeded the towing capacity of your truck with the additional 3,700 pounds of ice and snow you are now schlepping around. To say nothing of even more weight if you’re also hauling a sled in the bed of your pick up.

Throw in whatever fudge factor you want. “My truck is underrated.” Or “My trailer is heavy duty.” But there’s no denying all that extra blubber you’re hauling on snow-covered roads in freezing temperatures. 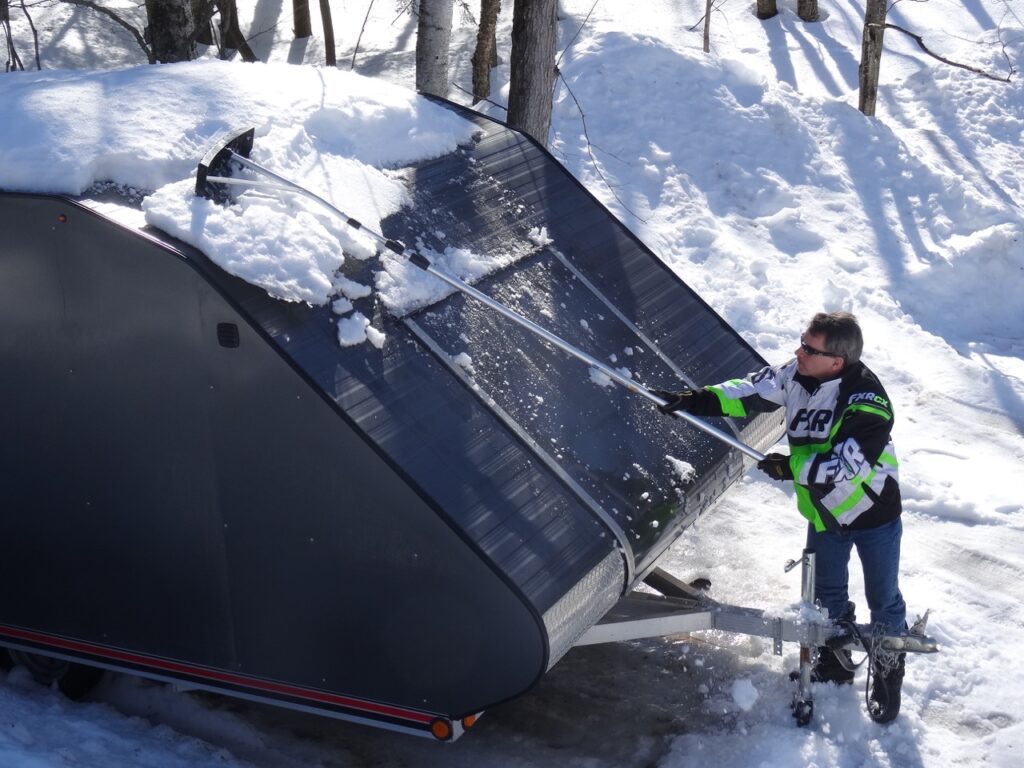 Now that I’ve scared the hell out of you, take a few minutes to read the specification label on your trailer. Figure out the GVWR of the axles, the dry weight of the trailer, and calculate the payload capacity. Be certain the tire load matches the GVWR by multiplying the maximum load written on the sidewall by the number of tires on the trailer. It should equal or exceed the GVWR. Check the tire pressure while you’re at it.

Regardless of the trailer type or size, you should do the math, and always remove snow from the top of the trailer. All told, it will tow easier, you’ll get better mileage, and it will be far safer going down the road. Plus, you may avoid a conflicting encounter with law enforcement and save a bundle on the axle replacement program.

Thanks to Dan Gould, Executive Director of the New Hampshire Snowmobile Association for permission to use his article. 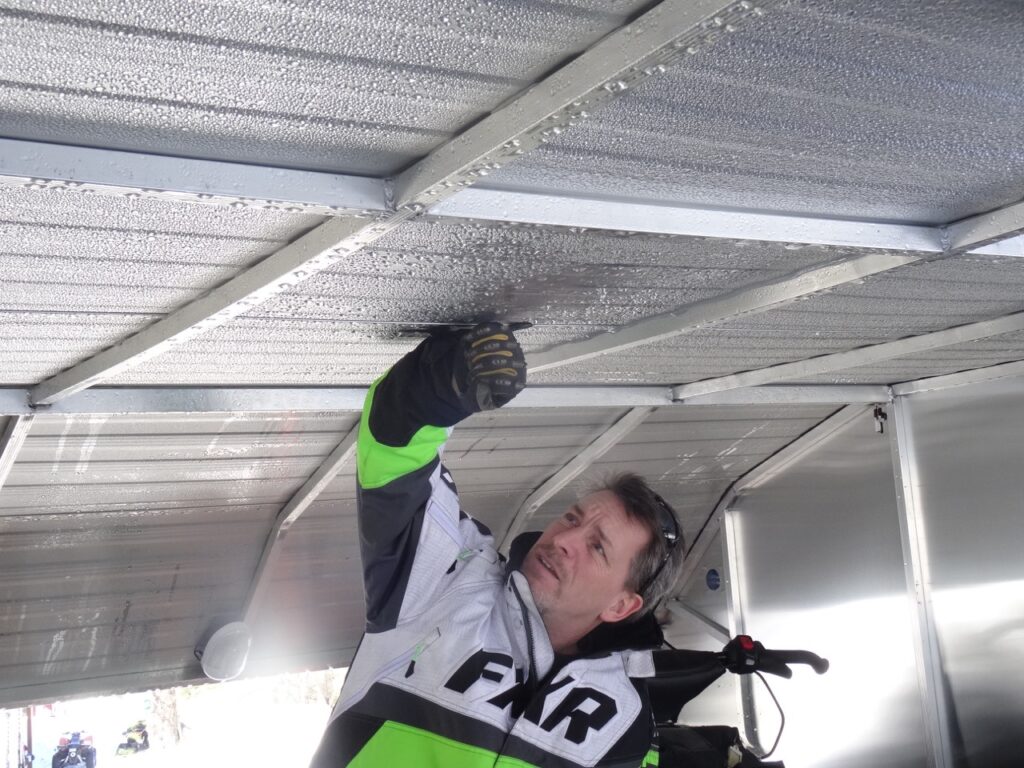 Thanks to Paul McNichol of Alumite Enterprises, distributor of Triton Trailers for assistance with this list.