Riding through a deer yard while snowmobiling Northern Maine. Photo by Al Fletcher

Have you ever wondered about snowmobiling Northern Maine? Here’s everything you need to know…

One memory is that I’ve never snowmobiled down a trail with stone markers in the middle. But I’m a law-abiding guy. So I as we rode on that Border Trail between Maine and New Brunswick, I had visions of being pounced on by both U.S. and Canadian Customs & Immigration officers waiting in the woods.

That’s because Maine’s Trail 81, the “Border Trail”, travels through the forest directly along the International boundary between our two nations. And it’s as easy for for snowmobilers to cross over that line as moving to the other side of the trail! 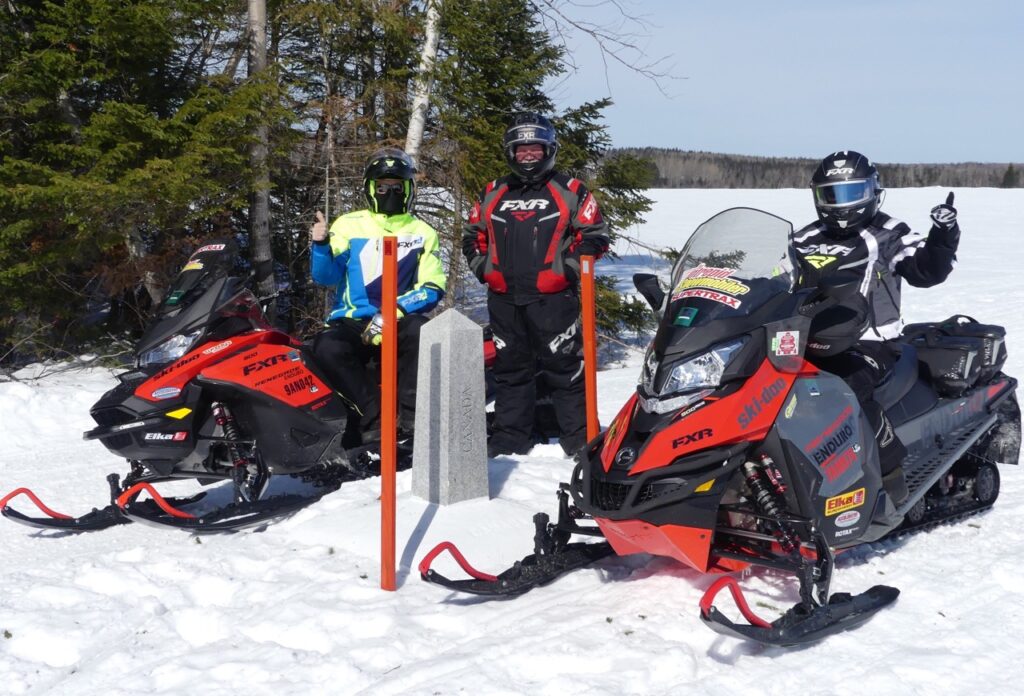 On either side of the International Border – photo © by Craig Nicholson

If you’re heading north, you’re mostly on the Canadian side of these three-foot high border markers spaced out along the way. But you’re on the American side when travelling south. Fortunately, other than a few cameras, no one was lurking in the trees to stop us.

Just as well, because last winter, snowmobilers flocked to Aroostook County, Maine. Why? Because more than 12 feet of snow fell. And it stayed from November to April. Our Supertrax crew heard rumours in January that this popular New England snowmobile destination was already on track for a banner season. So, we planned a visit in March to enjoy their long riding season for ourselves. We certainly weren’t disappointed! 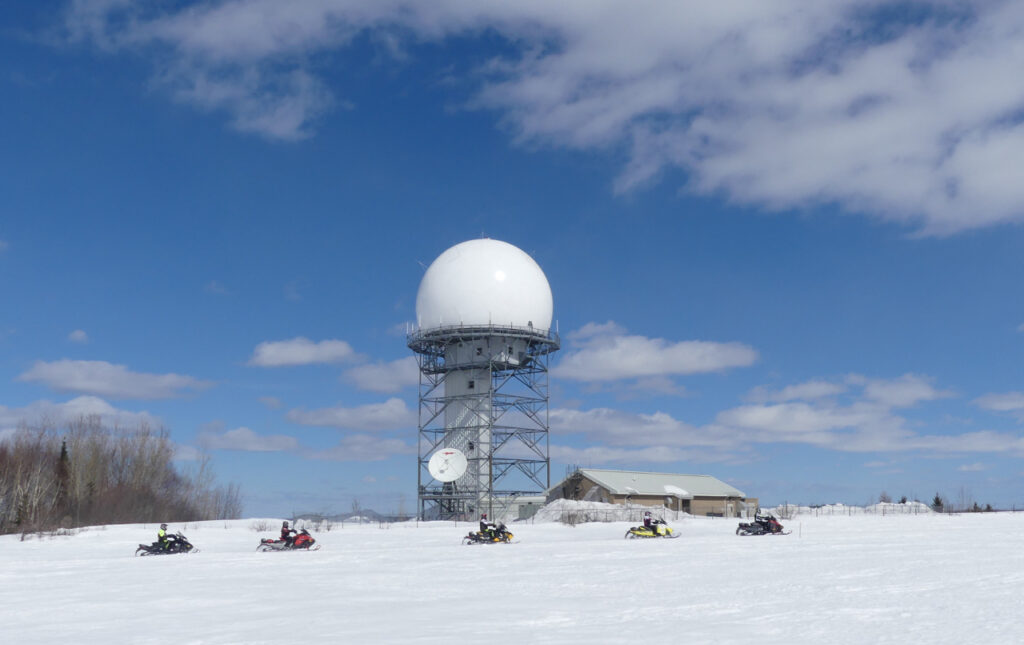 Aroostook County sits at the top of Maine like a crown jewel of winter. It thrusts up into Canada. There, it borders on Quebec to the north and west, and New Brunswick to the east. As such, Aroostook is the northern-most county in the contiguous United States east of the Great Lakes. It also boasts the largest county landmass east of the Mississippi River.

Fortunately, the elevation of the Appalachian Mountain range enhances this northerly positioning. Together, they make Aroostook a reliable and bountiful snow maker. And a snow magnet for riders from across New England and beyond.

Maine’s uplands form a high, relatively flat plateau. It extends northward beyond the Appalachians. The terrain slopes gradually downward toward the north and east. The eastern part of this area supports Aroostook potato-farming. Meanwhile, the western part is heavily forested and tracked by numerous old logging roads.

Many of these become part of the 14,000-mile (22,500-km) Maine Snowmobile Association trail system each winter. Aroostook County boasts 2,300 miles (3,700 km) of these highly ranked groomed trails. So there’s plenty for visiting sledders to enjoy here. 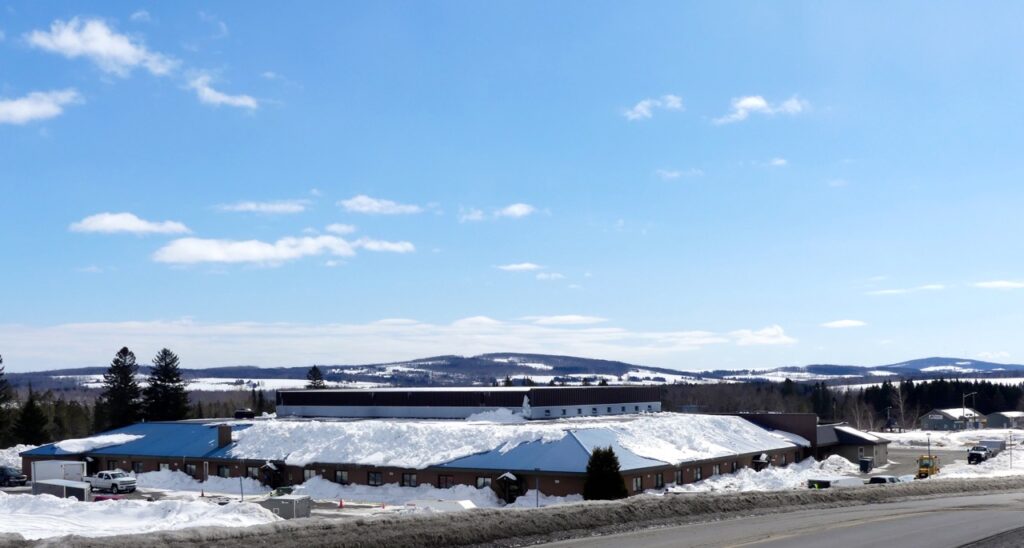 Wanting to be in the centre of this action, we checked into the Caribou Inn & Convention Centre. It’s located in the Town of Caribou on the eastside of Aroostook County.

The newly renovated Caribou Inn has it all. Amenities include on site restaurant, indoor pool & hot tub, bar, and 73 well-appointed rooms with comfortable beds. Plus, plenty of truck, trailer & sled parking, direct trail access to 83A and gas nearby. Best of all, this snowmobile-friendly hotel is well positioned for staging day ride loops in every direction.

The Aroostook Chamber of Commerce produces the Northern Maine Snowmobile Trails map. A quick review shows that an Interconnected Trail System anchors their network (as it does throughout the State). In The County, two-digit numbers designate these trans-state corridors. They range from 81 to 92 (and display in Red on maps) for primary trails. Meanwhile, the map indicates secondary routes with three-digits (coloured Green). 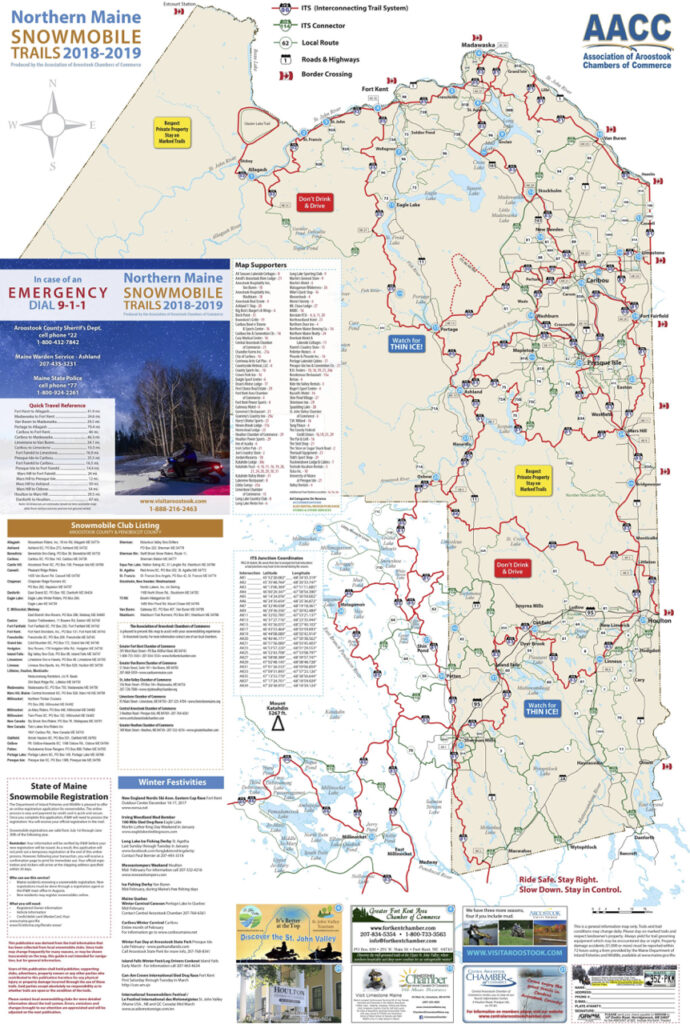 For example, we snowmobiled south one day for 135 miles through Fort Fairfield, Presque Isle and Mapleton. Another day’s 145-mile loop took us north via Limestone, Van Buren and Madawaska (don’t miss the lookout at the north end of Long Lake). Meanwhile, on a third day we got a late start and cruised west for 115 miles through Washburn, Ashford and Portage.

I should note that we owed our relatively modest daily distances to time for exploring, sight-seeing and taking photos, not to any trail deficiencies. In fact, regular grooming occurs, and Maine has no snowmobile trail speed limits. So it’s easy to set a pace that really eats up the miles. As long as your speed remains reasonable for conditions and doesn’t endanger others! 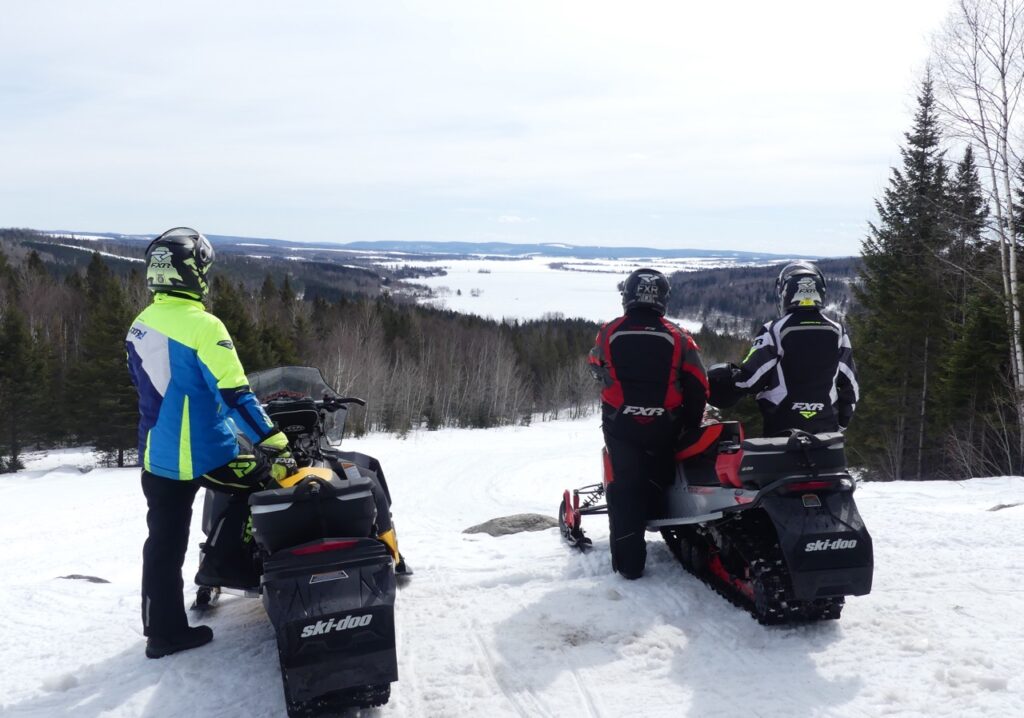 Looking south from the lookout at north end of Long Lake. Photo © by Craig Nicholson

Besides, visitors to The County need to take their time at intersections. Pausing ensures staying on your intended trail, not blowing through hoping for the best. In my preparation for riding Maine, I’d heard that the trail signage was somewhat old fashioned. That it might not be up to snuff for inspiring confident visitor navigation. So, I was pleasantly surprised to see sufficient trail number signs. But quickly learned to check them carefully at intersections.

That’s because more often than not, volunteers had hand written more directional or destination information to existing signs with black magic marker. Not exactly up to the standard set by the top ranked trail riding destinations. But it worked and kept us from getting lost. That being said, an intersection signage upgrade would significantly enhance the Aroostook County snowmobiling experience. 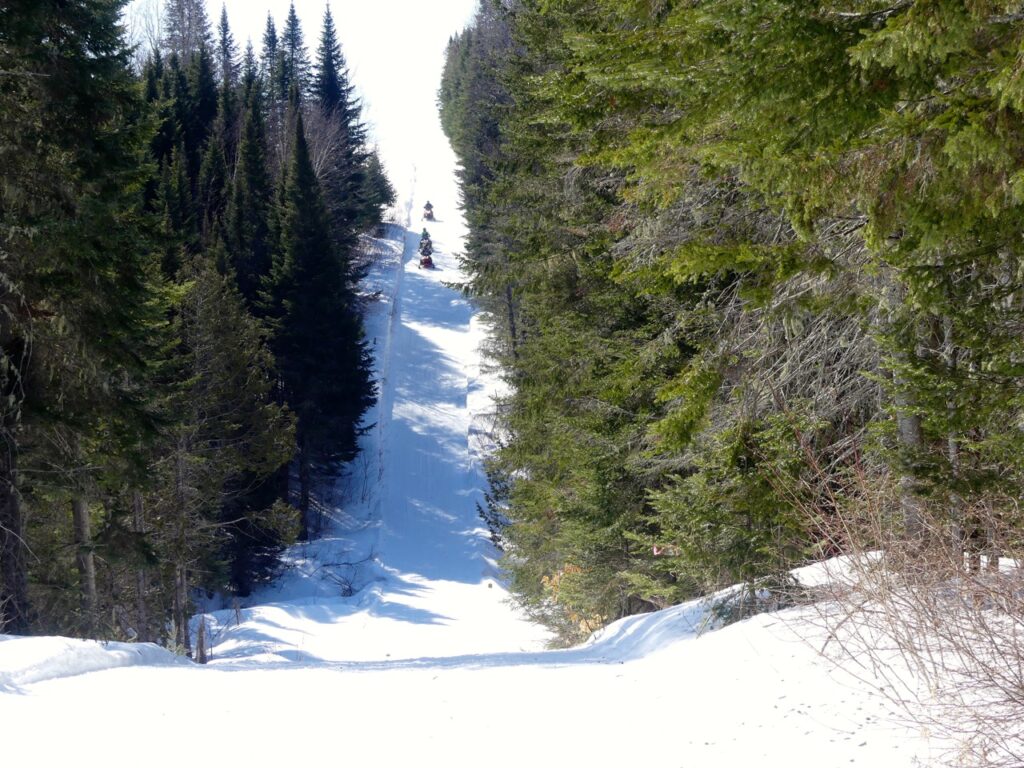 Meanwhile, the Aroostook County trails provide sufficient fuel stops, hearty restaurants and rustic lodges catering to snowmobilers. Many of these are marked on The County trail map. Also, they appear on its back as advertisers, making it easy for visitors to plan their rides.

Plus, there’s a “Quick Travel Reference” chart showing approximate mileages between various county destinations. But like me, I bet most visiting riders would appreciate a map face that shows actual distances for every trail.

During our stay in Aroostook, we met avid snowmobiler and county sledding ambassador, Gary Marquis. He issues the popular Aroostook County Trail Report. It’s a timely and valuable resource for visiting riders that details latest trail conditions and grooming info. Gary’s also the font of all things snowmobiling in The County. So hearing about the latest trend among snowmobilers intrigued us. It involves multi-night stays for day rides from Aroostook’s numerous backcountry lodges, sporting camps and outfitters.

Whatever your choice, you’ll discover that Aroostook County offers a massive snowmobiling playground. Each winter it delivers an exciting variety of terrain and a welcoming “down-home” feel. Best of all, The County benefits from oodles of snow and its well-developed network of snowmobile trails. Therefore, it typically provides top notch riding from as early as December to as late as early April. So, do yourself a favour and add Northern Maine to your sledding bucket list of new destinations to discover!