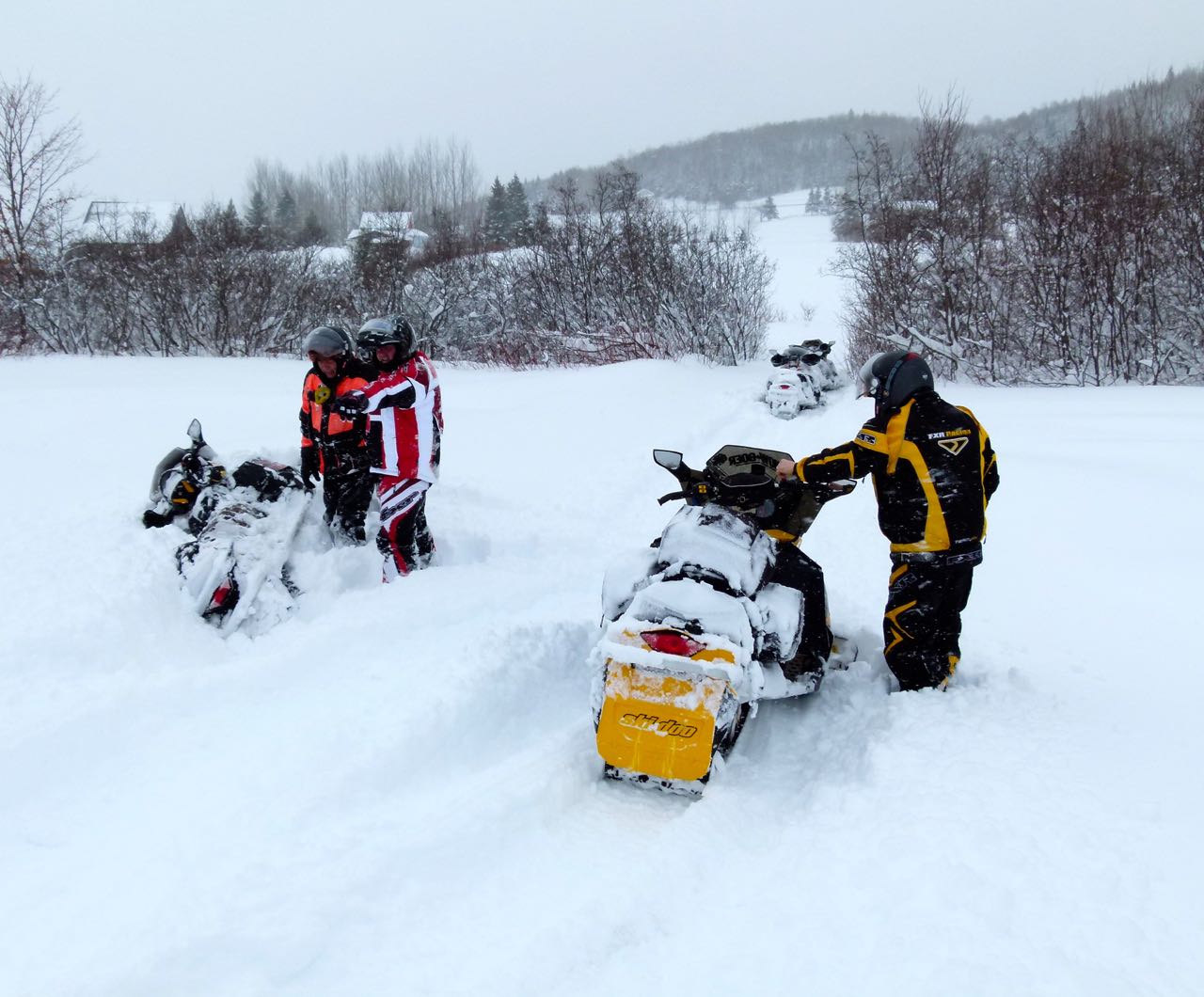 Related: Emergency Gear For Every Ride

One day in Quebec, one sled blew a piston in the middle of nowhere. Not being close to anything, we decided to tow it to our next hotel destination. We hooked up the tow straps and began what would end up being a 200-kilometre pull. The tower, towee and an outrider went on ahead while the rest of us followed along some distance back so that if anything else went awry, we could help.

Watching the tow duo ride along was like watching synchronized sledding, like bobbsey-twins leaning simultaneously into corners as if they had rehearsed their choreographed routine a million times. Who knows, maybe they practice in their garage during the summer.

I was leading the back up group when suddenly it seemed like someone had started a snow blower up on the trail right in front of me. Out of that white blast, a huge moose churned into my path before I could so much as hit the brakes. Fortunately, it ran away from me down the trail; otherwise I would have done a moose-hide face plant. As one guy quipped: “It’s still early in the day, so we got lot’s of time for more screw-ups yet!”

Another sled had developed electric starter problems on the previous tour, which had supposedly been fixed. At a remote gas station, the ignition button suddenly stopped working again. From the last episode, we knew that needle nose pliers would jumped start it – except ours were up ahead somewhere with the tow group. After asking around, we finally found a pair and got the sled running, never to be turned off again (or at least not until we and our needle-noses were re-united).

Soon after, I slid into a sharper than expected corner and buried my Ski-Doo 1200 4-TEC up to the ying-yang in deep powder off the trail. With three of our guys up ahead, that left three of us to dig it out, which we finally did after much huffing and puffing. Meanwhile, that starter problem sled kept threatening to stall out while idling, so we had to keep a close eye on it too!

Not much farther along, we came upon a solo stranger with his hood up. None of us spoke the other’s language, but we were able to get him aboard one of our remaining sleds to ride double to a relais about 30 klicks away were he could get assistance. The starter problem sled kept threatening to stall. So what else could go wrong?

We overtook our tow group, who had to stop because it had started snowing heavily. Their going was getting much tougher with loose powder on the trail. They had blown the tow sled belt and were running short of fuel. The rear grab bar of the tow sled was also cracking from the strain of so much pulling. They installed a spare belt; I donated my 12-litre emergency gas supply. We re-attached the tow straps to the running boards instead, and off they went again — but not until we got those needle nose pliers!

After dropping our confused passenger off at the relais, we followed in the tracks of the tow crew to a village for a pre-arranged gas stop. About half way in, there they were, stopped to change a belt again. They waved us on and while we were at the pumps, the outrider drove up to say that the tow sled had run out of gas a short distance out of town, so we towed it in for fill up. What else could go wrong?

It continued to snow and the towing got even tougher. Another belt sacrificed. We reached a road-covered road about 20 klicks from our destination. Here, a small village allowed us to leave the dead sled chained to the porch of the local liquor store for later pick up.

Now the tower and towee had the dubious joy of riding double to our hotel. From there, they planned to rent a car and drive the next morning to our staging hotel about a 2.5 hour drive away, returning with their truck & trailer to pick up the broken sled. Simultaneously, the rest of us would snowmobile back to our staging hotel.

Fat chance. That storm was in full swing all night. So what else could go wrong? Next morning, there was too much snow for anyone to ride anywhere. The roads were treacherous at best. Collectively, we decided that our best bet was to send four drivers back to our staging point in the rental car to bring back all our vehicles. That took six hours. Then another 2.5 hours back to the staging point again, followed by a ten-hour drive home. So all in all, we were on the road from 6 AM that day to the early hours of the next morning. All for the love of snowmobiling!