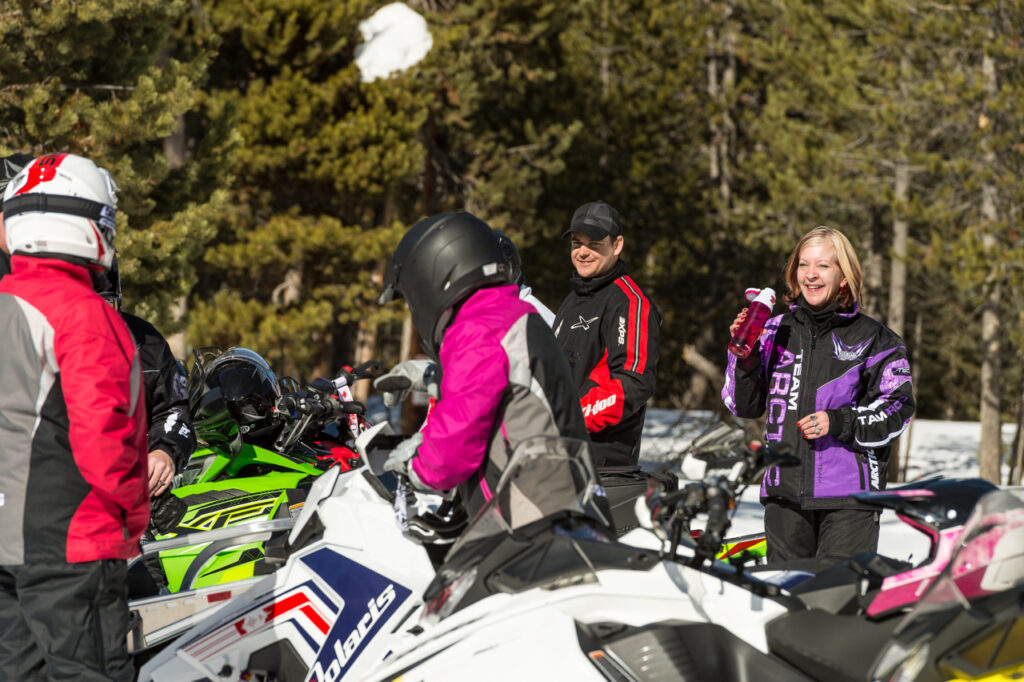 During years of snowmobiling, I’ve heard and seen it all, including things snowmobilers say in person, on snowmobile videos and in snowmobile magazines. So I’d like to recall some of them to you – maybe you’ll recognize a few that have passed your own lips – and impart the benefit of my accumulated wisdom. Those who do much snowmobiling themselves should be able to relate…

An expression used by group leaders purportedly to reassure other riders that arrival must be imminent. Most typically expressed at the end of a long ride when its getting dark and cold and you should already be there. Actually, all it means is that a) your suffering isn’t over yet, and b) your leader has no idea where he really is.

Things Snowmobilers Say – “It will get better soon.”

Another phrase of supposed reassurance, also articulated as a prayer that the moguls currently jarring your bones won’t get any deeper and can’t go on forever. Unfortunately, by the time this phrase is uttered, “forever” has already arrived.

Things Snowmobilers Say – “I think we have enough fuel to get there.”

Oops! This is just what everyone wants to hear, especially past the point of no return. It conjures images of spending a cold night sleeping on your snow machine in the bush. What happened to filling up at the last opportunity? Probably, someone said this…

Things Snowmobilers Say – “I don’t need to top up at this station.”

Okay, smarty-pants, so that means you know exactly where the next fuel is available? That the expected station will be open by the time you get there or not closed permanently since your last pass through the area? Or that you won’t get lost, have to tow another snowmobile or detour a longer way around? Useful reminder rebuttals: “Never pass gas” or “I’d rather be looking at it than for it.”

Things Snowmobilers Say – “Why do the trails always get bumpy after lunch?”

Somewhere, the snow gods have written this as a rule. I may not have hit a bump all morning, but sure as shooting, if we stop to eat, that post-lunch trail will be mogul-city. And the more I eat, the worse it will be. Bring on the Rolaids.

Has anyone ever actually seen a brass monkey out snowmobiling? No, and you know why? Because they are smart enough to stay home when it’s that cold. What’s your excuse?

Things Snowmobilers Say – “It will get warmer soon.”

Well, not really, but once frozen, you stop feeling as cold. Or anything else for that matter. Actually, you’re entering the first stage of cryogenics, that thing they do to preserve bodies and bring them back to life later. Much like what happens to snowmobilers when it’s brass-monkey time.

Things Snowmobilers Say – “I can’t believe there’s no one else on the trail!”

An exclamation of delight usually expressed just before coming across the most traffic you’ve seen all season, typically oncoming in a corner on your side of that best snowmobile trail.

Things Snowmobilers Say – “Where are all the hangers?”

The question that many snowmobilers ask when first entering a motel room. It’s as if hangers become especially rare when winter arrives. Maybe they head south for the winter with the snowbirds. Consequently, we are left trying to figure out how to fit all our gear on that lone, bent and forlorn wire hanger remaining.

A question asked when one finds the directional or destination sign at a critical intersection has fallen over into the snow with no indication of what direction it originally pointed. Might as well flip a coin.

Things Snowmobilers Say – “How far are we going to ride today, dear?”

A trick question, often posed by a spouse before departure. What it really means is: remember that I don’t want to go on a marathon or freeze my butt off today. Ignore it at your peril or you will definitely hear…

Things Snowmobilers Say – “Why am I doing this?”

Or its more ominous counterpart “Why are YOU forcing me to do this?” Typically follows your gratuitous assurances that “It’s not much farther now.” and “It will get better soon.” or “It will get warmer soon.” Better find a five star resort, pronto.

Things Snowmobilers Say – “This isn’t on MY map!”

Usually said incredulously by a group leader, as if “this” is on someone else’s, but has mysteriously disappeared from his or hers. Or as if, since “this” is not on MY map, then it can’t possibly actually be there in your face on the trail. Sometimes followed by: “It’s not much farther now.” but never by: “I think we’re lost.”

Things Snowmobilers Say – “This sled has never let me down.”

Well, knock on wood because everyone knows what happens next!

I’m sure you’ve got a few favourite things snowmobilers say of your own, plus a few choice expletives deleted, such as those I’ve had to leave out of this family blog. Fortunately, the things snowmobilers say most are ones like: “What an incredible ride!” or “Now THIS is what it’s all about!” or “Any day of snowmobiling is better than a day at the office.” Yeah, it’s all good, baby!