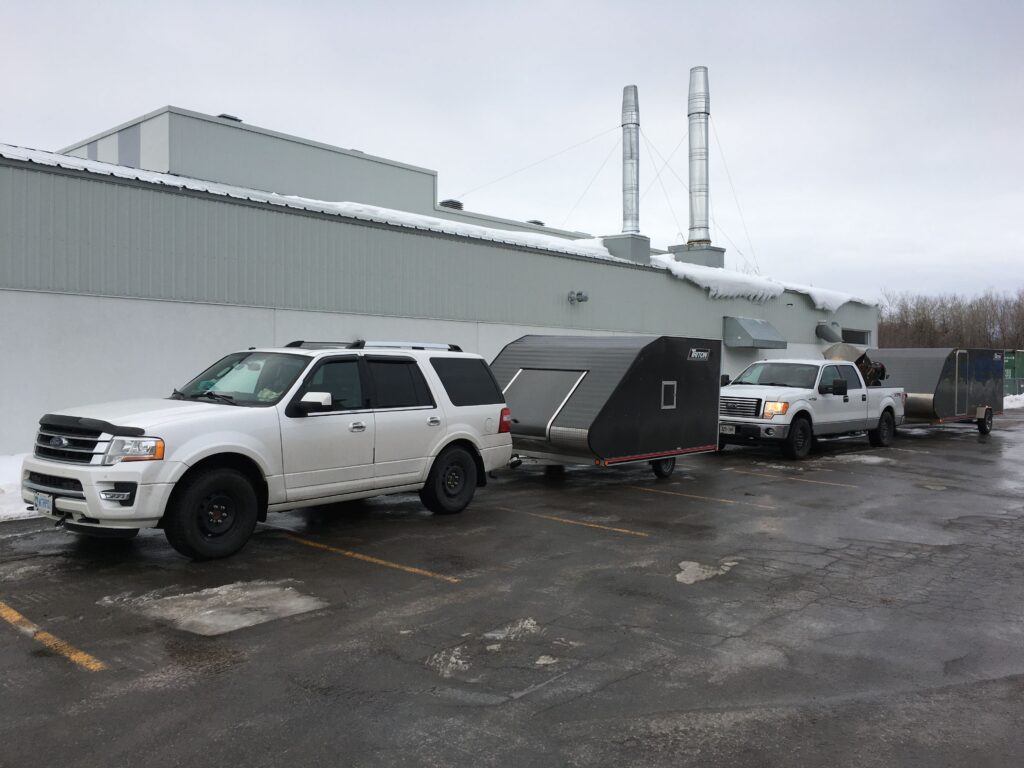 What’s a Triton Low Rider? Previously, I’ve talked about the features and benefits of my Triton TC118 Snowmobile trailer, one of several hybrid models from Triton. And just when I didn’t think it could get much better, it did! A couple of winters ago, I towed around a prototype low rider TC118 on my snowmobile tours and snowmobile vacations and here’s what I found…

As a pilot project, Paul McNichol of Alumite Enterprises (Canadian Triton distributor) recreated one of the fully framed, totally integrated and fully enclosed TC118 units like I’ve been using. He reduced its height 4” to 6” from standard. Now it would sit at about the same height as Triton’s TC167, an inline trailer that sits lower thanks to external wheel wheels. The idea behind this prototype was to reduce wind drag and therefore, fuel consumption by up to 10%. This mission was accomplished not by chopping anything off, but by simply settling the entire, size-as trailer box more down onto its carriage frame. Inside headroom remains the same. 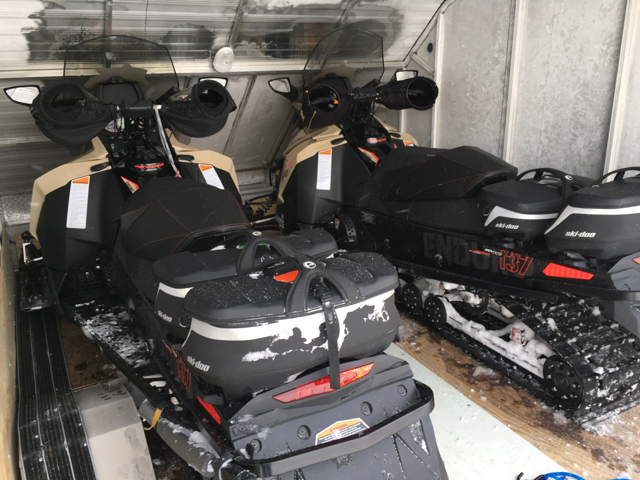 I admit to being sceptical. I thought “no way” when I spotted new wheel wells that had formerly been totally underneath the trailer. Paul now had them bulging up inside into the previously a flat floor. This new hump occurred right where the outer skis of both my sleds travelled going on or off. But after one try with no problem whatsoever crossing over the raised wheel wells,the whole lowering concept sold me big time. Especially since I discovered many new advantages that improved my towing life considerably. 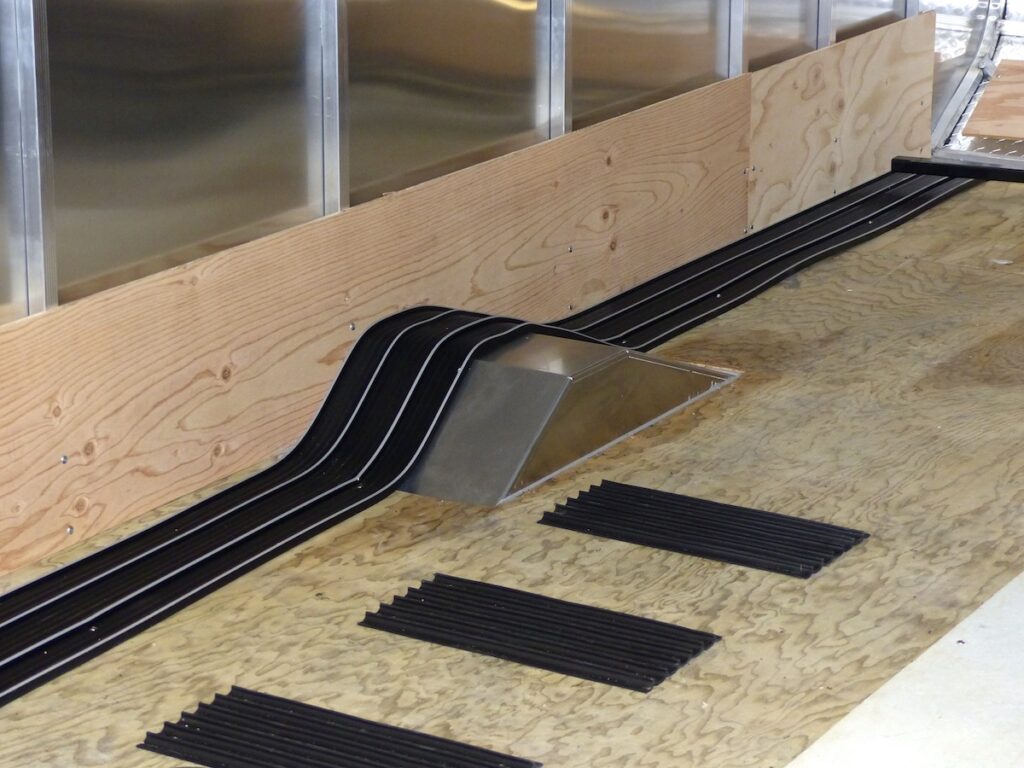 Advantage one is that my outer front skis easily go over and past the raised wells while loading. Then the wheel well hump acts as a block to help keep my snowmobiles from shifting or sliding back during transit. This doesn’t replace the front ski bar or rear tie downs. But it does help keep snow machines more securely in place. 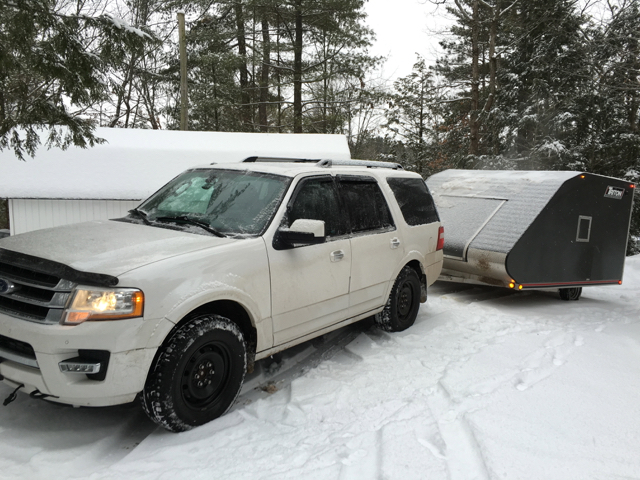 As most riders know, one big transition in modern snowmobiles is a lower centre of gravity. This provides greater control, balance and cornering. Same goes for the Triton Low Rider. Dropping its overall height almost 6″ lowers it centre of gravity and provides a more controlled, predictable and comfortable tow experience.

A second advantage of the Triton Low Rider is that the towing is ultra smooth and more streamlined. The lowered trailer height produces less drag because it doesn’t stick up very much above the line of my Ford Expedition roof. Plus, the Triton Low Rider suffers less impact when side winds blow stronger than usual. So I hardly experience any of those sudden and scary jerks from the trailer when towing in gusts.

Did the Triton Low Rider save me money on fuel? For sure it cost less than my previous TC118 model. The decrease is somewhere between 5% and 10% less, depending on how fast I drive. And when you’re towing thousands of kilometres every winter like I do, very penny counts. 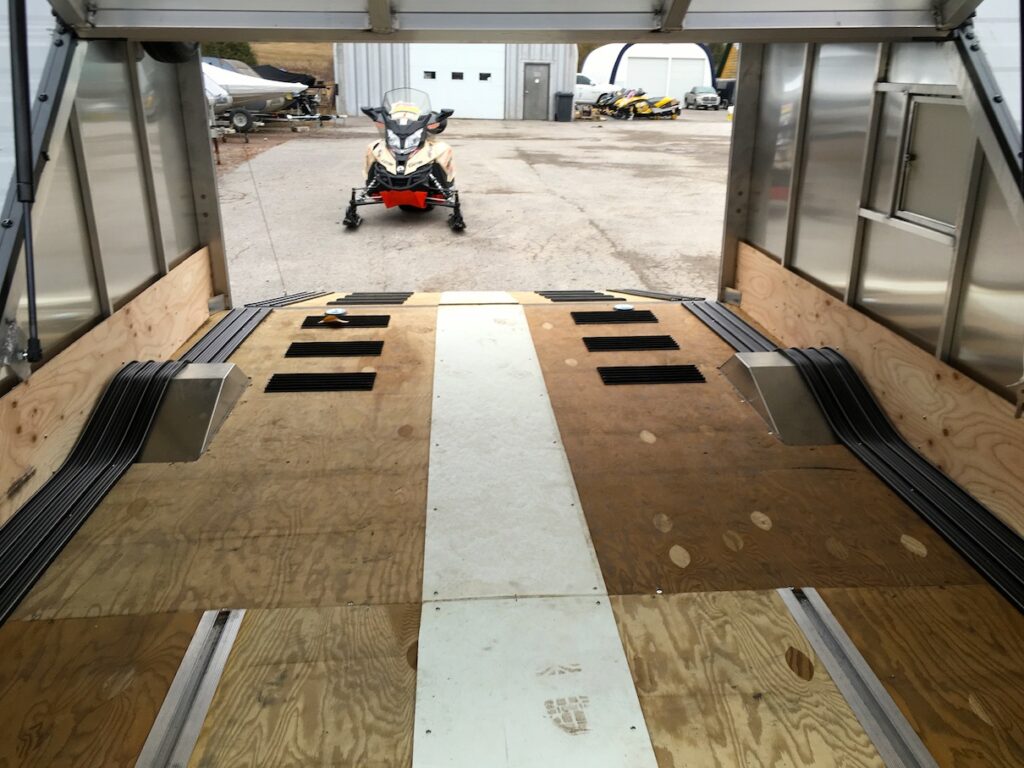 The next advantage from the Triton Low Rider is the floor sitting closer to the ground. This makes the rear door/ramp noticeably less steep when dropped for loading. This reduced incline makes it easier and less slippery to walk up and down into the trailer. Best of all, the lower ramp angle also makes a big difference to loading snowmobiles into the trailer. While sitting outside on the snow ready to drive on, I can look all the way to the front of the trailer interior. This improved sightline enables me to better judge exactly where I want to steer the snow machine before I touch the throttle.

Meanwhile, the gentler incline means I can ease my sled on, without taking any run at it. Both this new loading sightline and more comfortable approach make it a breeze to load. They are also definite confidence builders for those less experienced with loading trailers.

Backing off is also easier with a Triton Low Rider. With less incline on the ramp, the back end of my snowmobile doesn’t suddenly drop off when it clears the trailer floor. This provides me with the control to literally walk the snow machine off with little throttle and no brake until its on the ground. 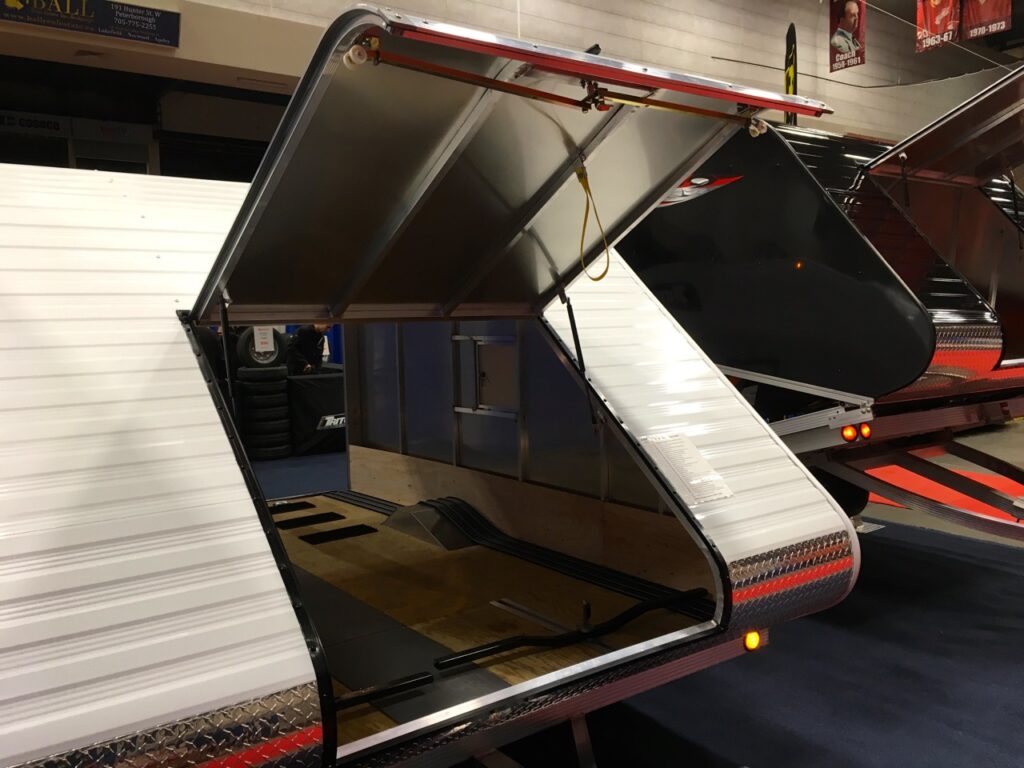 I didn’t notice this until later and this advantage may vary with a person’s own height. These Triton models have a front access door used to clamp or unclamp snowmobile skis. When reaching in through this door, I always used to get the front of my upper pant legs covered with road grim where they contacted the front of the trailer. But now that it’s lower, I find I’m not brushing against the trailer front as much so my clothes are cleaner. Big benefit when I’m wearing my good snowmobile pants! 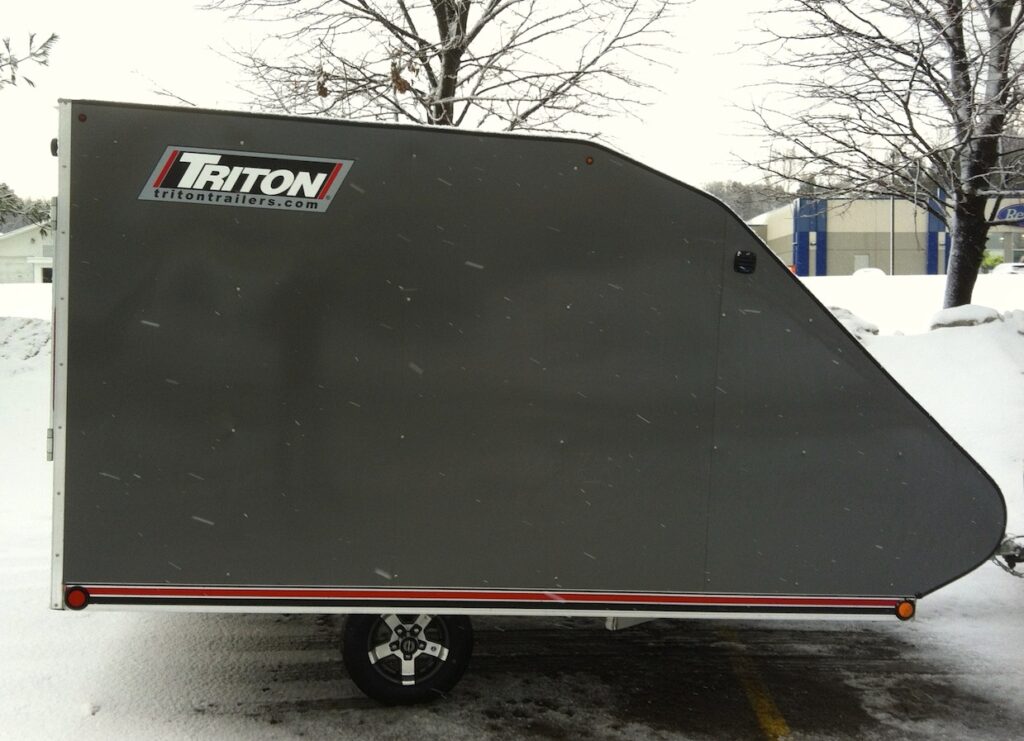 The pilot Triton TC118 Low Rider Snowmobile Trailer experiment was such a success that it is now the only TC118 version available in some markets. Anyone else who wants the new Triton low rider style can order a TC118LR through their local Triton Trailer dealer. With so many advantages and benefits, why not?

While on the topic of trailer dealers, if you want to find a trailer dealer near me, all you need to do is call your local community office and they should have a list of useful numbers that can help.

Check out other product reviews.