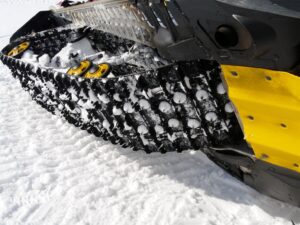 Do you use Woodys snowmobile studs for your snowmobile tours or snowmobile vacation?  Last winter, a sledder friend was riding a snow covered, tertiary road. Suddenly, his snowmobile flipped and rolled on ice. All of us believed that if his sled had been studded, the incident would not have occurred. So what about studs…

If you are doing a lot of trail riding or lake running, studs are a valuable safety addition to your sled. For my thousands of kilometres of trail riding each winter, I wouldn’t go without them. Nor would I ride without sharp carbides on my skis.

Studs work best as traction grabbers for better control on hard packed and frozen surfaces. They can also be lifesavers on unexpected icy patches, especially in the corners. Studs can also enable your sled to walk up or down a hill whose surface has been polished smooth by previous sleds.

When riding across frozen waterways, studs improve control. Especially in conditions of glare ice. Or where your sled is moving from patchy snow to bare ice and back again. In some trail conditions, studs can also provide better control when slowing down. Although when the brakes lock up in a panic stop, I’ve seen studded sleds roll as easily as non-studded ones

The more freeze-thaw cycles that occur in a winter, the more valuable studs become. Why? Because conditions are likely to be icier. Studs are also worthwhile if you tour through several riding areas. In this circumstance, the surface can change even within the same day. Studs may be more valuable while riding on frozen morning trails. That’s because later in the day, the sun has softened up the snow making it less slippery. When riding with others who have studded sleds, it’s best for your sled to be studded too. This is because without picks, your sled won’t perform like theirs will. And that could make it difficult for you to settle into the rhythm of the group ride.

Woodys Snowmobile Studs Not for Every Use

That said, studs don’t work everywhere. They are little use in powder snow. They only add extra weight for mountain riding. Studs are not as effective for riding in the early season. Or whenever else snow cover is skimpy, because the metal points aren’t good on pavement or rocks. Above all, studs are not brakes. Anyone who relies on studs to stop their sled in time is asking for trouble. Same goes for anyone who rides faster because they have studs.

I’m often asked what kind of studs I use. After trying many brands, I stick with Woody’s snowmobile studs. Using them, I’ve never lost a stud or had any track damage. Best of all, even after 15,000 klicks of riding in one season, the Woody’s studs remained sharp enough to provide the extra control I’ve come to rely on. Besides, Woody’s are the stud manufacturer of choice for Ski-Doo snowmobiles. And as an avid Ski-Doo rider, that’s good enough for me!