Ride Your Side This Winter 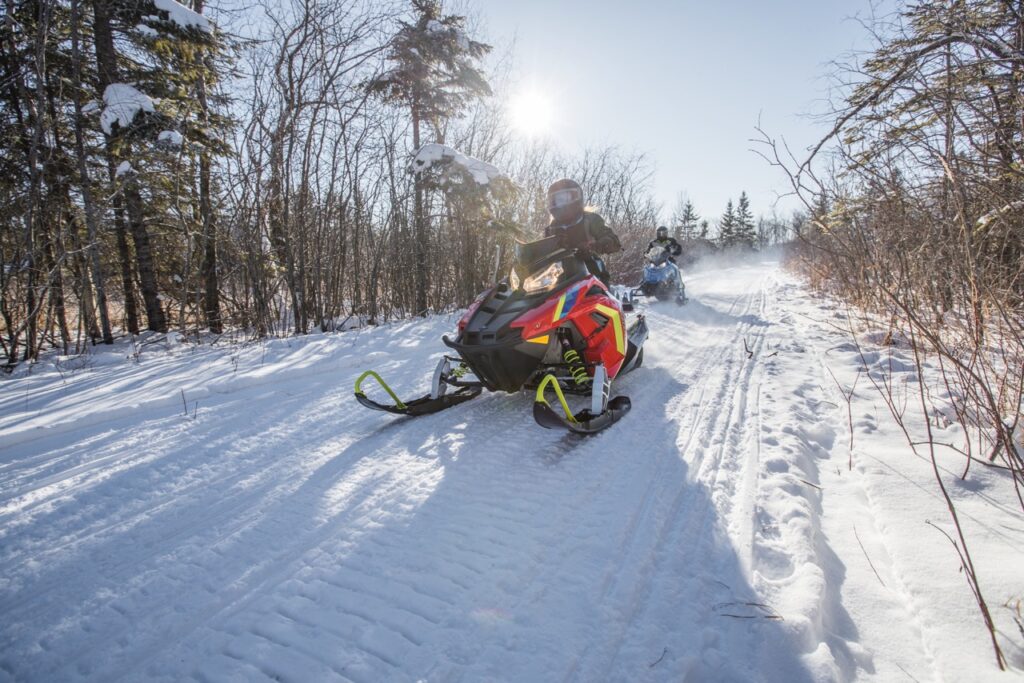 Too many snowmobilers ride in the middle of the trail.

How come so many snowmobilers wander all over the trail? What happened to ride your side trail riding?

In fact, riders not keeping to the right is the numero uno reason many people don’t feel safe anymore on the trails. And why many either don’t ride on weekends at all or have given up snowmobiling altogether…

My Scary Ride Your Side Experience 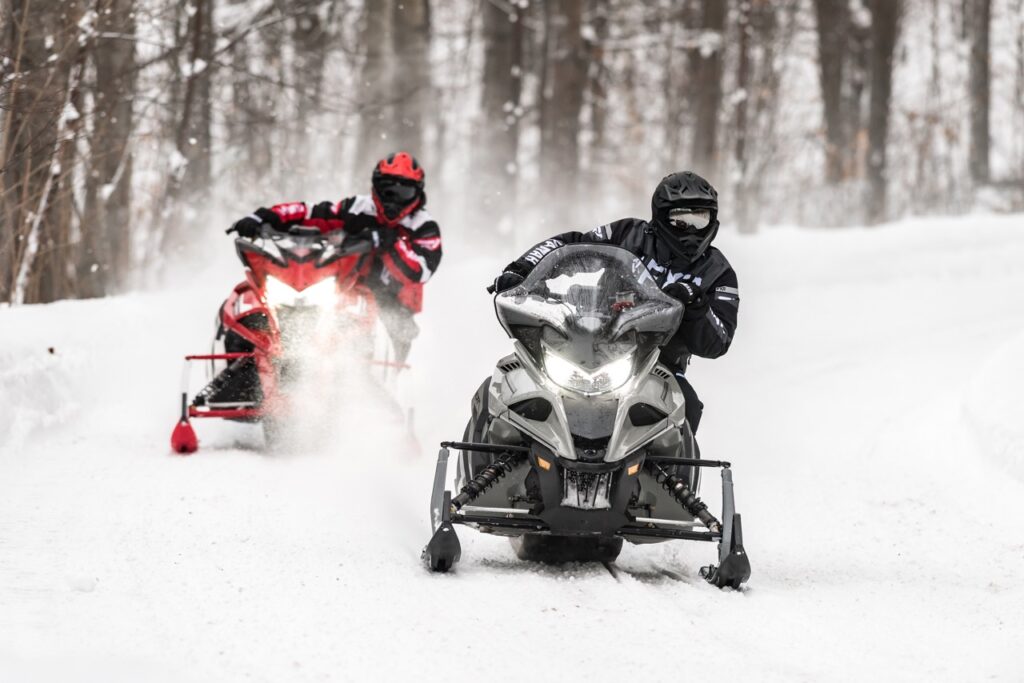 Lead sled travelling thru the centre of the corner.

Riding a well-groomed trail, I guided my snowmobile toward a downhill left turn. Dense evergreens lined the sides, their snowy branches screening out sightlines around the upcoming corner. Making my approach, I steered my sled a fraction more to the right. So, my right ski now hugged the trail’s edge.

Suddenly, an oncoming headlight rounded the corner, less than 100 feet away. In the blink of an eye, a snowmobile filled the centre of the trail ahead. Closing fast, it jerked wildly as its wide-eyed operator fought to get back on his side in time.

Meanwhile, I’d slowed as much as possible. And aimed my right ski tip into the trail’s snowy edge. But hummed in by trees, going off trail wasn’t an option. So, out of maneuvering room, I helplessly awaited heart in throat for what looked like an inevitable crash.

Frankly, I figured I was head-on toast. Then miraculously, the onrushing snowmobile shifted enough that our skis just kissed. But with a bang, the side of his cowling hit the rear grab handle at the backside of my sled. And then he careened off down the trail with hoods parts flying until finally coming to a safe stop.

Fortunately, no one else was hit. And no one was hurt. But I was scared and pissed off. Meanwhile, my sled suffered only a dented grab bar, nothing ride-ending. I also felt relieved that those following in my group avoided mishap. This resulted from their also being on their own side of the trail. And thanks to vigilance, good reactions and riding a safe distance apart. Thus, everyone was able to stop in control. And without hitting the sled in front.

Throughout my years of trail riding, I’ve had several other close calls. Often, when an oncoming sled was in my lane. This behaviour is unacceptable anywhere. But is particularly frightening on corners and hills, where no riders can see what’s oncoming.

Following sled taking its half from the middle.

And you know what?  I bet most snowmobilers have similar stories. Hopefully, most have outcomes as incidental as this one. But I’m also sure that too many result in more serious sled damage. Worse, some end up causing bodily injury. And a few even lead to tragic fatalities. So how come, when it comes to safety warnings, we mostly hear about speed and impairment? But staying to the right of the trail? Not as much.

Which begs the question: why can’t everyone stay in their own lane? Yeah, I know there’s no yellow centre line painted on the snow. So, it seems that many riders deliberately choose to ride down the middle. Or inadvertently stray into that space.

As proof, ask any experienced trail rider how many sleds regularly take their half from the middle. Or check with a groomer operator about which part of the trail is typically most humped out. That’s right, it’s the centre, because many riders going in both directions stray there more often than not. Meanwhile, I’ve lost count of the times I’ve found a smoother surface closer to the edges, what about you?

There are plenty of reasons why so many snowmobilers treat the middle as their comfort zone or as if they own it. Inexperience. Inattention. Ignorance. Arrogance. Lack of training. Poor (or no) traction products. And yes, of course, riding faster than they can control, especially on corners and hills.

Enter Ride Your Side 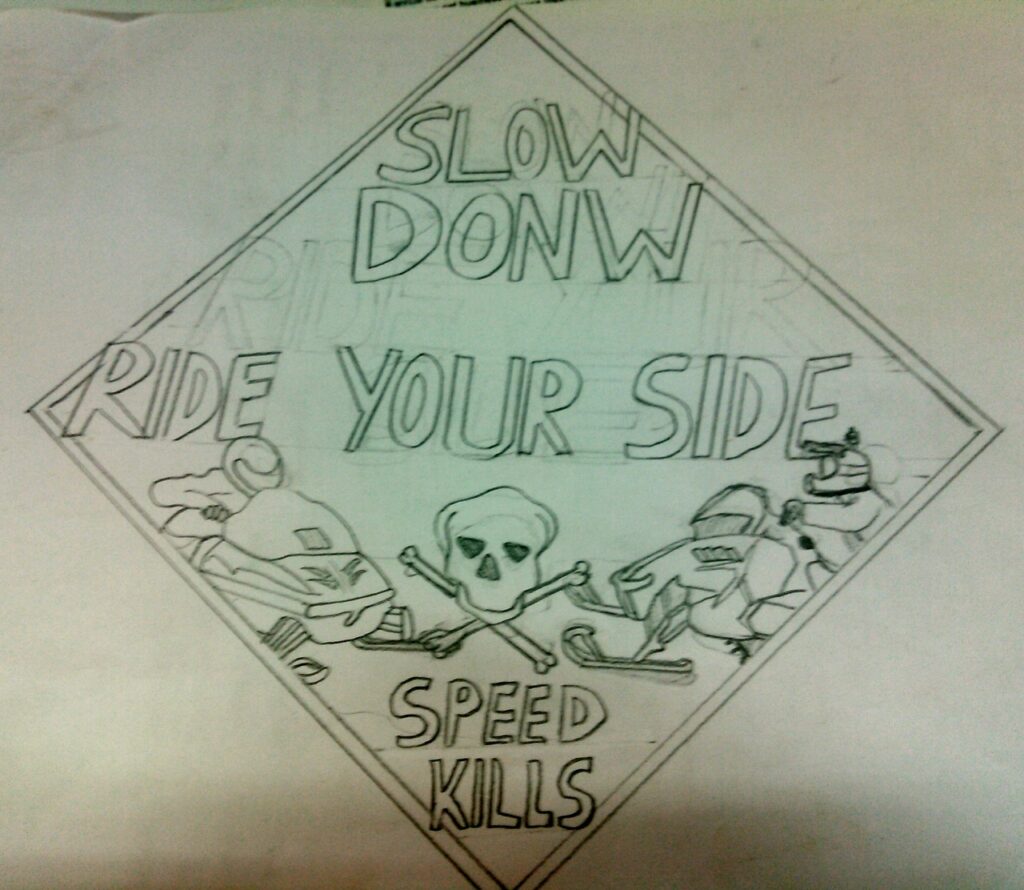 First Ride Your Side sketch by John Neff

So, what’s to be done? Club volunteers for Ontario’s Missing Link Snowmobile Club, Todd Neff and his son, John, have a plan. They’ve had their share of trail scares from snowmobilers riding in the wrong place. Both while riding in a groomer and on their own sleds.

Rather than suffer in silence, these grassroots snowmobilers are speaking up by creating a sign that reads: RIDE YOUR SIDE. As Todd says: “I’m a man who believes doing something about it is far better than just complaining and putting my hands in my pockets!” 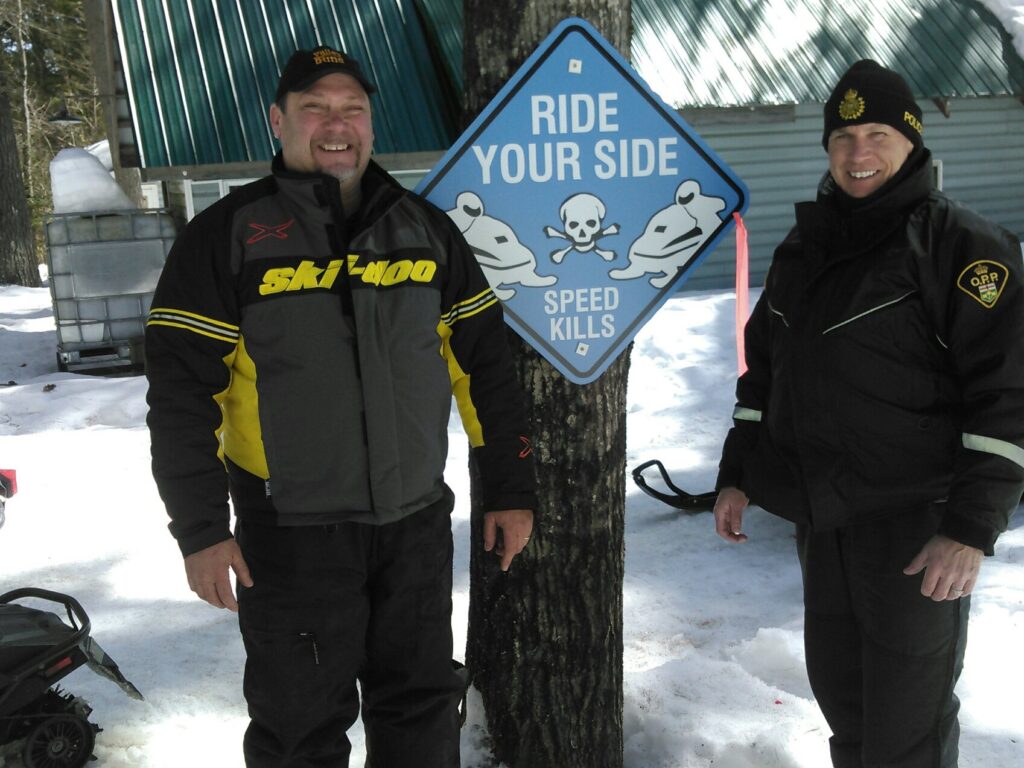 This simple, easily understood and catchy slogan now appears on some of their local trails. To date, the Neff’s have also persuaded some neighbouring clubs to follow suit. Their proposition isn’t to festoon the trails with RIDE YOUR SIDE signs. Instead, they want participating clubs to strategically place these information signs as reminders.

That means locating them near the beginning of each club’s trails. And at the entrances to major trails or intersections, at snowmobile clubhouses, warm up shelters and special events. Now, they’re looking to expand their grassroots initiative to other snowmobile clubs. 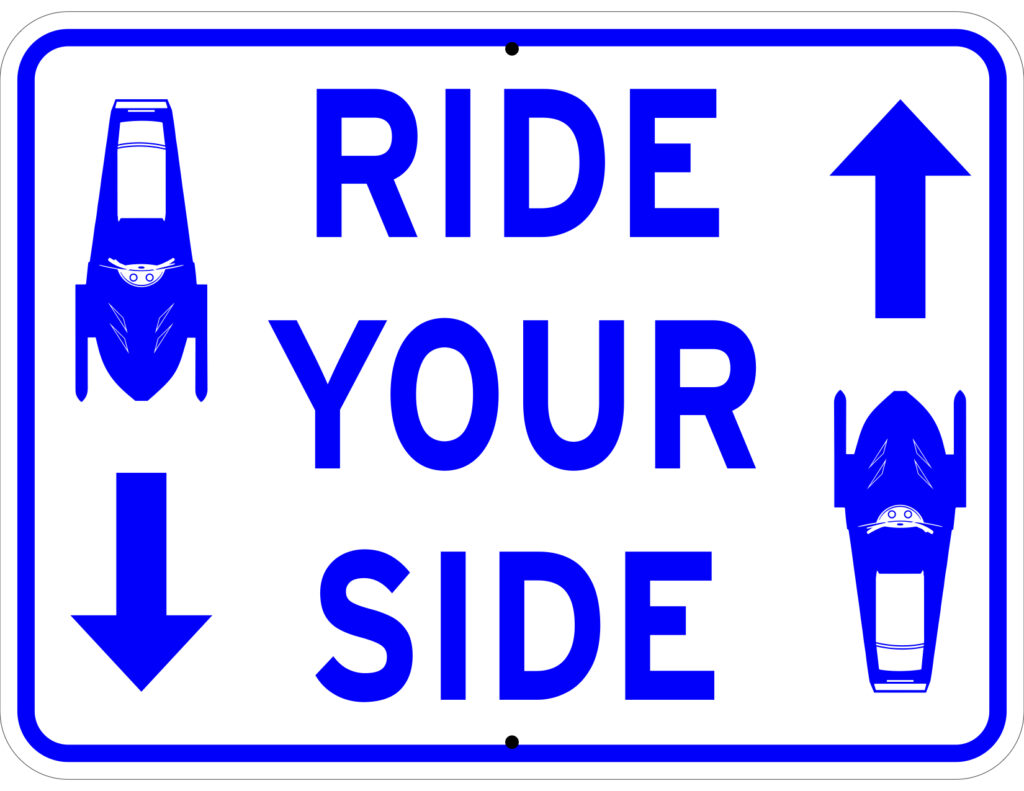 To do so, they’ve enlisted the expertise of one of Ontario’s premier trail sign companies, BMR Manufacturing. There, owner Jim Reavell is an avid snowmobiler himself. So, he took a personal interest in this project. And with the Neff’s input and approval, BMR tweaked the Neff’s original prototype created by John. Now, the RIDE YOUR SIDE sign meets standard trail signage specs as a universal blue & white information sign, usable everywhere by every club.

It’s an era when red tape, regulations and rules often discourage individual initiative and dreams. So, seeing the Neff’s idea become a reality is an inspiration for all of us. Hopefully, it will also inspire every snowmobiler to ride their side.

After all, the more of these reminders snowmobilers see, the more this crucial message will become top of mind with trail riders. And that will make snowmobile trails more enjoyable for everyone. Thanks for your dedication to making this happen Todd & John!