The late Rita McNeil’s ode to Cape Breton “Home I’ll Be” blared on my SUV stereo. We were towing our Triton trailers across the famous Canso Causeway. It connects mainland Nova Scotia to the island whose majestic scenery many find reminiscent of Scotland. The terrain rose rapidly from the coast up to the highlands interior of “Zone 1” (to the west of Bras d’Or Lake) so designated by the Snowmobilers Association of Nova Scotia (SANS).

The only thing predictable about Cape Breton’s weather is that it won’t be the same a moment later. Surrounded by salt water and blessed by the elevation of part of the Appalachian Mountains, it’s a snowmaking machine. On average, Baddeck boasts 54.5 snow days with annual accumulations of almost 300 centimetres. There’s even more less than half an hour away in the highlands!

For snowmobilers, this begets a sledding season that typically runs from November to May. It also means being prepared for a wide variety of conditions, as we quickly discovered. Meanwhile, if you’re interested in more Nova Scotia snowmobile tour info, check out my Snowmobile Nova Scotia article. 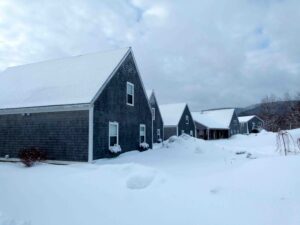 For our first two days of snowmobiling in south and central Cape Breton on this Nova Scotia snowmobile tour, we overnighted at the Keltic Quay Lodge in Whycocomagh. Here, our hosts Renie and Karen, provided a very classy, house keeping chalets and socializing in the ultra comfortable main lodge building. We ate at Vi’s Restaurant and the Farmer’s Daughter, both just a short walk away. And for a special treat. we checked out the cuisine at Charlene’s Bayside Café & Restaurant. Fuel and trail access are also close by. 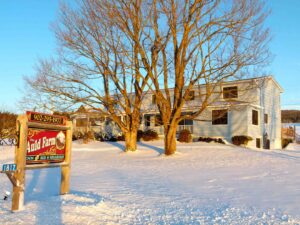 Next we moved to Auld Farm Inn in Baddeck for closer access to the central and north region. Here, Jan & Glen Vickers gave us 5-star treatment. Although Auld Farm Inn is listed as a bed & breakfast, snowmobilers can also arrange for home-cooked dinners after a long day on the trails. What’s more, they offer a special drying room for wet gear that ensures a comfortable start next morning.

Having an amazing Nova Scotia snowmobile tour destination like Cape Breton in your backyard is a huge bonus for sledders from Nova Scotia. Also for those from PEI and southern New Brunswick, so why not give it a try this spring?

The Fundy Highlands are a large snow pocket located in southern New Brunswick. They are positioned along the west shore of the Bay of Fundy, between Saint John to the southwest and Moncton to the northeast. The Highlands benefits from good snow conditions generated by maritime weather and terrain elevation. It is part of the same Appalachian Mountain range that thrusts up again in Cape Breton.

This high country is interspersed with a multitude of forestry roads that serve as wide, smooth trails each winter. So snowmobilers searching for some of Atlantic Canada’s best riding need look no farther than this. But if you’re interested in more New Brunswick snowmobile tour info, check out my Snowmobile New Brunswick article.

When snow conditions are good everywhere, riders can choose to trailer (or snowmobile) to the periphery of the Fundy Highlands area for their New Brunswick snowmobile tour. Then, you can ride in from such locations as the Hampton Inn, Moncton (east) or the Queen’s County Inn, Chipman (north) for two to four days of great sledding without much repetition.

You can also ride in by trail from the Fredericton (west) or Miramichi areas (north) or from Nova Scotia through the Sackville area as part of a saddlebag tour. 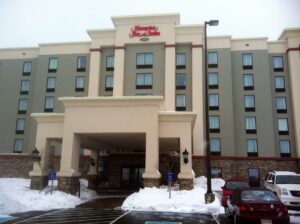 This first class hotel is located on the Trans Canada Highway and also Trail 646. It has ample parking, an amazing continental breakfast and an indoor pool. Service is attentive and cordial, making it a great staging location to head west into the Fundy Highlands for several days of riding. 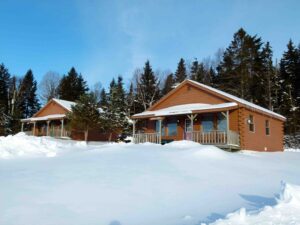 Located on Trail 864, this family owned operation provides comfortable housekeeping chalets along with an onsite restaurant. Fuel in town on Trail 886. Great location for exploring trails in the Caledonia Mountain region. Your hosts: Cathy and Wendy. 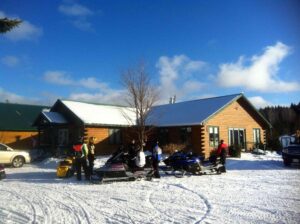 With direct access from Trail 811, Adair’s offers snowmobilers a mix of chalets and motel units, plus on site fuel and restaurant. Larry and Ida are as snowmobile-friendly as they come. Plus, Adair’s is the best jumping off point for riders hailing from the Saint John and points west. 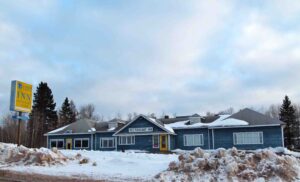 Riders from the Miramichi or Frederiction areas will find the Queen’s County Inn a good staging location for snowmobiling south into the Fundy Highlands via Trail 15. With an on site restaurant (and bakery!), decent parking and fuel nearby in town, the inn is located right on the trail and owner Kevin Bailey is an avid snowmobiler.

The Fundy Highlands boast some of the New Brunswick Federation of Snowmobile Clubs’ best trails and ample snow, so be sure to plan your New Brunswick snowmobile tour there real soon!

For the rest of this Maritimes snowmobile tour story + itinerary, read my High Country Riding in the Maritimes article as published in Snow Goer Canada magazine.