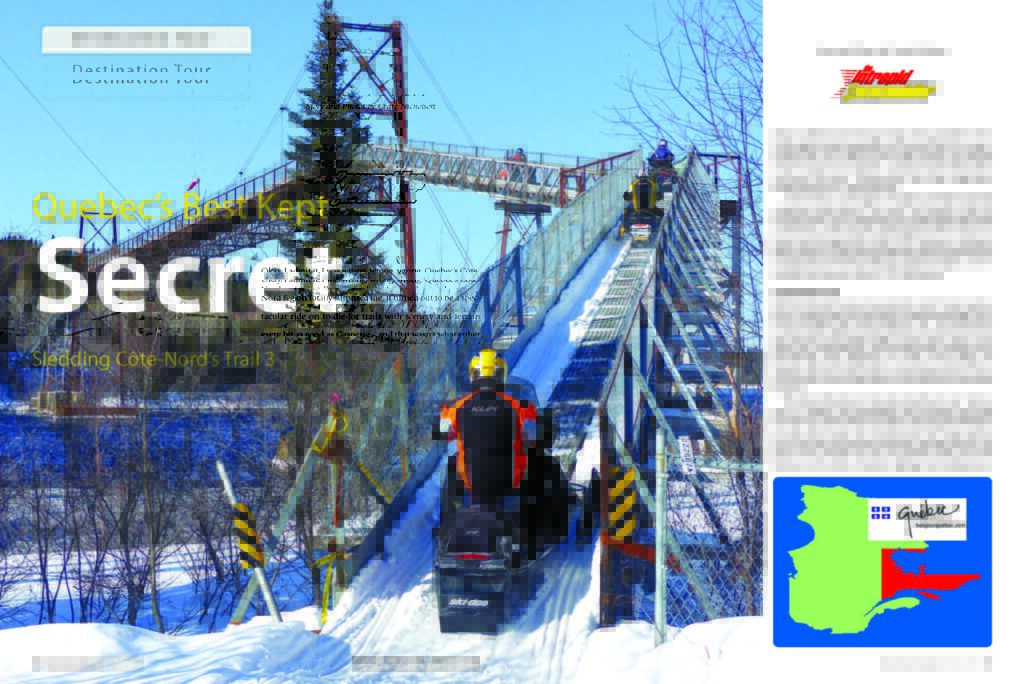 Snowmobile Cote Nord Quebec – okay, I admit it. I was wrong, wrong, wrong. The Côte-Nord region of Quebec totally surprised me as a snowmobile vacation choice. It turned out to be a spectacular ride on to-die-for FCMQ snowmobile trails. They boasted scenery and terrain every bit as good as Gaspésie. And that wasn’t what either my snowmobile magazine crew – Johnny Biasi, Dan Carty, Craig Irwin, Trish Robinson or I  – expected from this Quebec snowmobile tour.

Côte-Nord is a sub-region of Quebec Maritime. It’s situated along the north shore (“côte nord” in French) of the St. Lawrence River. This immense span of shoreline starts at Tadoussac at the mouth of the Saguenay Fiord. It continues east alongside the Gulf of St. Lawrence, ending at Blanc-Sablon, by the Strait of Belle Îsle (which separates the mainland from Newfoundland). Along its length, an FCMQ snowmobile trail runs for almost 1,700 kilometres… 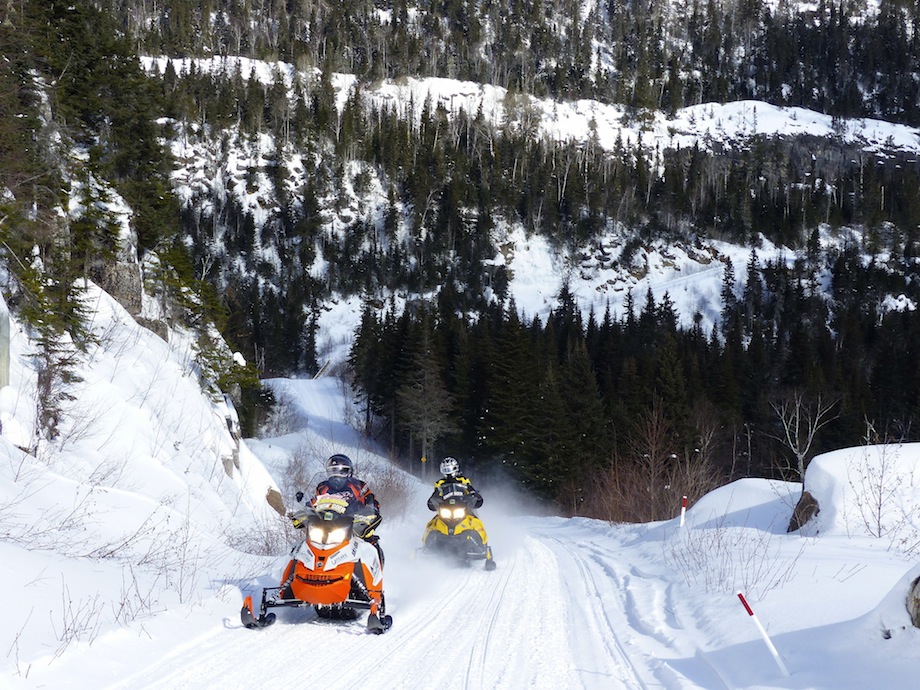 But it’s not your normal snowmobile trail. Trans Quebec Trail 3 starts near Montreal. It continues through Côte-Nord paralleling the main Highway 138. Then it terminates just beyond the far-flung village of Havre-Saint-Pierre. From there, the “Route Blanche” snowmobile trail continues east. Remarkably, after Highway 138 ends at the village of Kegaska, this trail is the de facto connecting corridor in winter. That’s because the Lower North Shore is not linked to points west by all season road.

The Route Blanche is variously described as an “adventure” or “expert” trail. This means it can be tenuous and only for hard-core, been-there-done-that, well-prepared sledders. On the other hand, we rode 665-kilometres of Trans Quebec Trail 3 between Tadoussac and Sept-Îles. It was top quality all the way and fully up to the best of Quebec signage and staking standards. So I was wrong to consider that our Quebec snowmobile tour would be anything but superb.

I was also mistaken in thinking that snowmobiling out and back on the same trail would be boring. First, Trans Quebec 3 was well groomed from start to finish. And sledding a smooth trail is always exhilarating. Second, with so many panoramic views, lookouts and other vantage points, you can’t possibly take them in on one pass through. Besides, going one way you see certain sights ahead. But miss others that are better observed from the other direction. 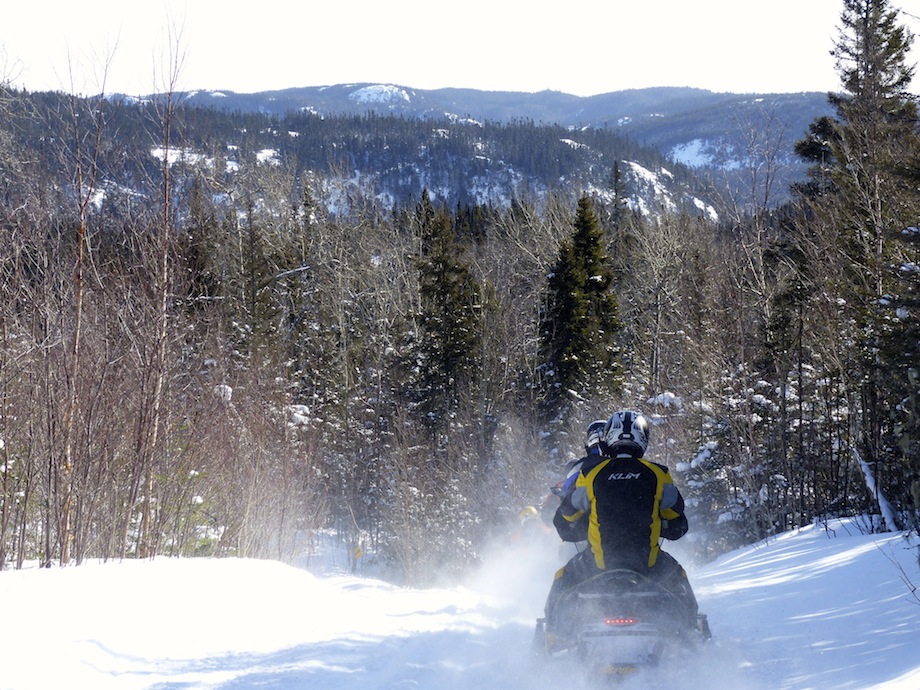 On our return trip along Trans Quebec 3, it was as if everything was new again. And I didn’t for a moment regret taking this linear route for our Quebec snowmobile tour. But if you’re not convinced, you can jazz up your ride back by trying a couple of local loops. There’s one north from Baie-Comeau and one north from Forestville. The latter is 100 kilometres of mind-blowing trails with scenery that will take your breath away. So don’t miss it.

Snowmobile Cote Nord Quebec – Getting There

I’d also doubted whether the almost 960-kilometre trailering distance from Toronto to our staging destination, Ferme 5 Étoiles in Sacré-Coeur, would be worth it. Wrong again. Our return on investment in terms of amazing trail riding was worth every minute in the trek. In fact, the drive’s very comparable to the 11-hours to Rivière-du-Loup (staging for Gaspésie) or Saguenay (staging for Monts-Valin). And it’s shorter than the trailer to Edmunston (staging for New Brunswick).

Of course, if you’re dismayed at these trailering distances, then you’ve probably never experienced some of Canada’s best snowmobile trail riding either. 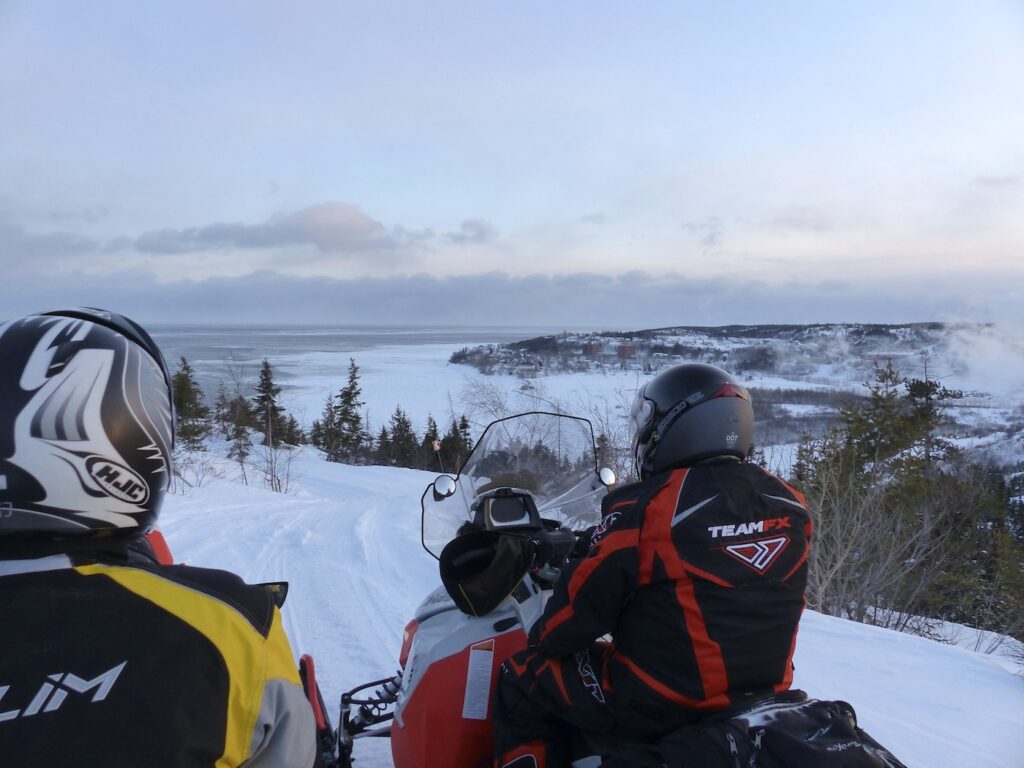 Côte-Nord welcomes snowmobilers in a unique way for their Quebec snowmobile tour. This north shore region is literally set apart from the rest of La Belle Province by the Saguenay Fiord. The asphalt of Highway 138 from Quebec City stops at the western shore at Baie-Sainte-Catherine and starts again at Tadoussac. There’s no bridge over the fiord. It’s too wide, too fast-flowing and the bottom is too unstable.

So Transport Canada operates year-round, 24/7 ferry service across the Saguenay. It’s officially part of Highway 138. Through ice and waves and current, these huge vessels carry everything from full transport trucks and buses to passenger cars. And yes, even snowmobiles. Near the end of a long drive, the Saguenay ferry crossing is a unique signal of your arrival in Côte-Nord.

I’d also had some concern that this less populated, more remote region of Quebec could deliver the goods. Boy oh boy, was I wrong about this. Every rider has snowmobiled a section of trail that’s out of this world. You know, the kind where it doesn’t get any better than this. You wish it would go on forever. But you also know full well that this exceptional section of trail is bound to come to an end at the next intersection, road crossing or around the next bend.

Not in Côte-Nord. I can’t remember the last time I rode 655 kilometres of such exceptional trail. It provided back to back to back sections of logging roads, utility corridors and other access routes seamlessly assembled into one long, linear masterpiece. Imagine the best trail you’ve ever ridden going on non-stop for your entire tour. That’s what we experienced in Côte-Nord on our Quebec snowmobile tour. 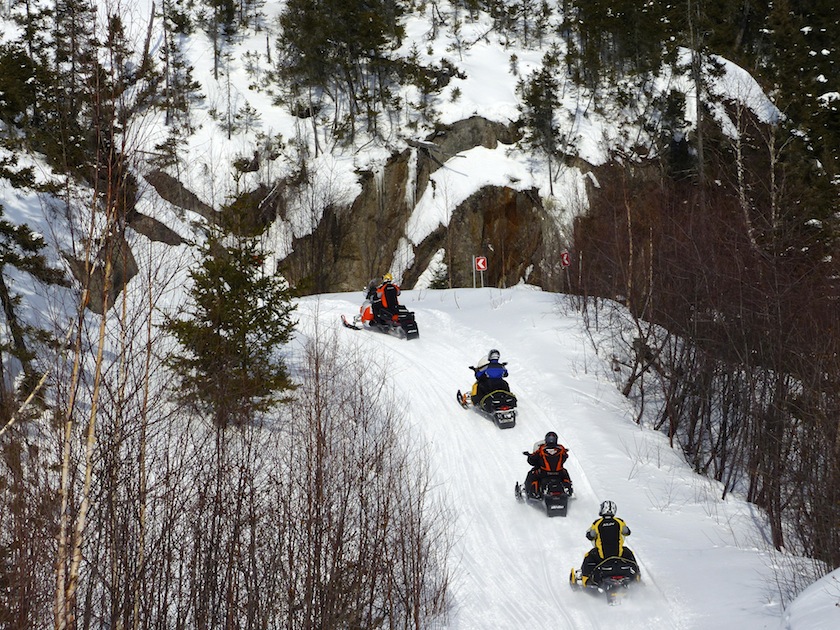 It’s worthy of note that except for four shared highway bridge crossings, there is no road running on Trans Quebec 3 in Côte-Nord. Also, no lake crossings and only two river ice crossings. You also get to cross the Rivière Manicougan just west of Baie Comeau. This happnes via what’s touted as the “world’s highest snowmobile bridge”. It’s a massive, single lane structure that’s very impressive indeed. And certainly high enough for me!

Out & Back on Trans Quebec 3

For our Quebec snowmobile tour, we chose to ride the well-serviced Trans Quebec 3 to Sept-Îles and back. Fuel was sufficient en route and well marked. Besides, going any farther would have added at least two more days to our planned five days of sledding. And past Sept-Îles, towns are fewer and farther between. With a few side trips, we racked up a respectable 1,435 kilometres and could have done more (see Our Itinerary).

So how does Côte-Nord compare to Gaspésie’s coastal trail route? Like its counterpart on the south side of the St. Lawrence, the Côte-Nord trail is generally set back in the high country above the coast. Frequent descents (and great views) lead to shoreline towns for services.

Yes, I was wrong in my preconceptions about Côte-Nord. As you have read, it’s an outstanding Quebec snowmobile tour destination. So be sure to put Côte-Nord on your bucket list to experience Quebec’s best kept secret as soon as possible! Meanwhile, if you’re looking for more great Quebec snowmobile tour destinations, check out the rest of my Quebec tours.

Trailer 960 kilometres from Toronto to Sacré-Coeur. 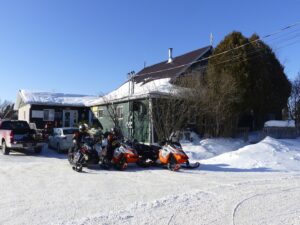 Auberge Ferme 5 Étoiles. Located right on Trans Quebec Trail 93 just north of the Village of Sacré-Coeur and overlooking the Saguenay Fiord, the Auberge Ferme 5 Étoiles provides unique lodging in your choice of motel rooms, condo apartments, cottages or even winterized yurts, plus an onsite restaurant with gas just down the road. With a wildlife refuge on site and many farm animals roaming around, available activities range from sled rentals and sled dog rides to snowshoeing and cross country skiing, the rustic Ferme 5 Étoiles makes a great staging place with lots of parking available for sledding adventures. 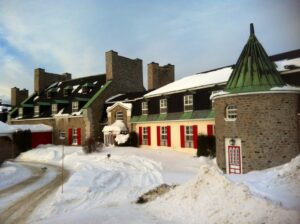 Hotel le Manoir. Perched on the St. Lawrence River’s edge on the east side of Baie-Comeau, the 4-star Hôtel le Manoir has all the charm of an historic colonial manor, plus the very best of modern services and amenities (including very comfortable beds). Accessible off Trans Quebec Trail 3 by the same local trail leading to the ferry dock to cross to Matane, the Hôtel le Manoir has an onsite gourmet restaurant, sled parking in front of reception and gas/convenience store available via the next local trail east of the hotel trail turn off.

Snowmobile 295 kilometres from Baie Comeau to Sept-Îles via Trans Quebec 3. 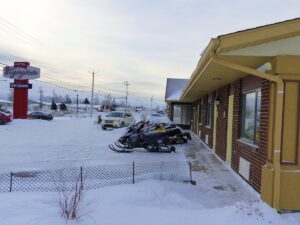 Hôtel le Voyageur. Located on the west side of Sept-Iles, the Hôtel le Voyageur is accessible via a local trail off Trans Quebec Trail 3 – look for a sign that says “Relais Club Ook-Pik” and follow the lodging symbol to their back door. Gas and convenience store is available via the next local trail west of the hotel trail turn off. Hôtel le Voyageur offers hot breakfast and sled parking in front of rooms, and local restaurants are a quick taxi ride away for dinner.

Snowmobile 295 kilometres from Sept-Îles to Baie Comeau via Trans Quebec 3. 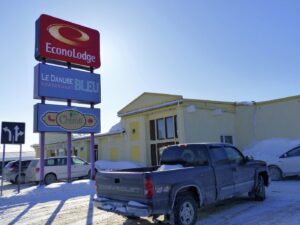 Econo Lodge. Well marked with trail signs, the Econo Lodge Forestville is right beside Trans Quebec Trail 3. With sled parking in front of rooms or under a covered pavilion, the Econo Lodge provides a newly renovated, onsite restaurant and lively bar, with across the street access to fuel and convenience store.