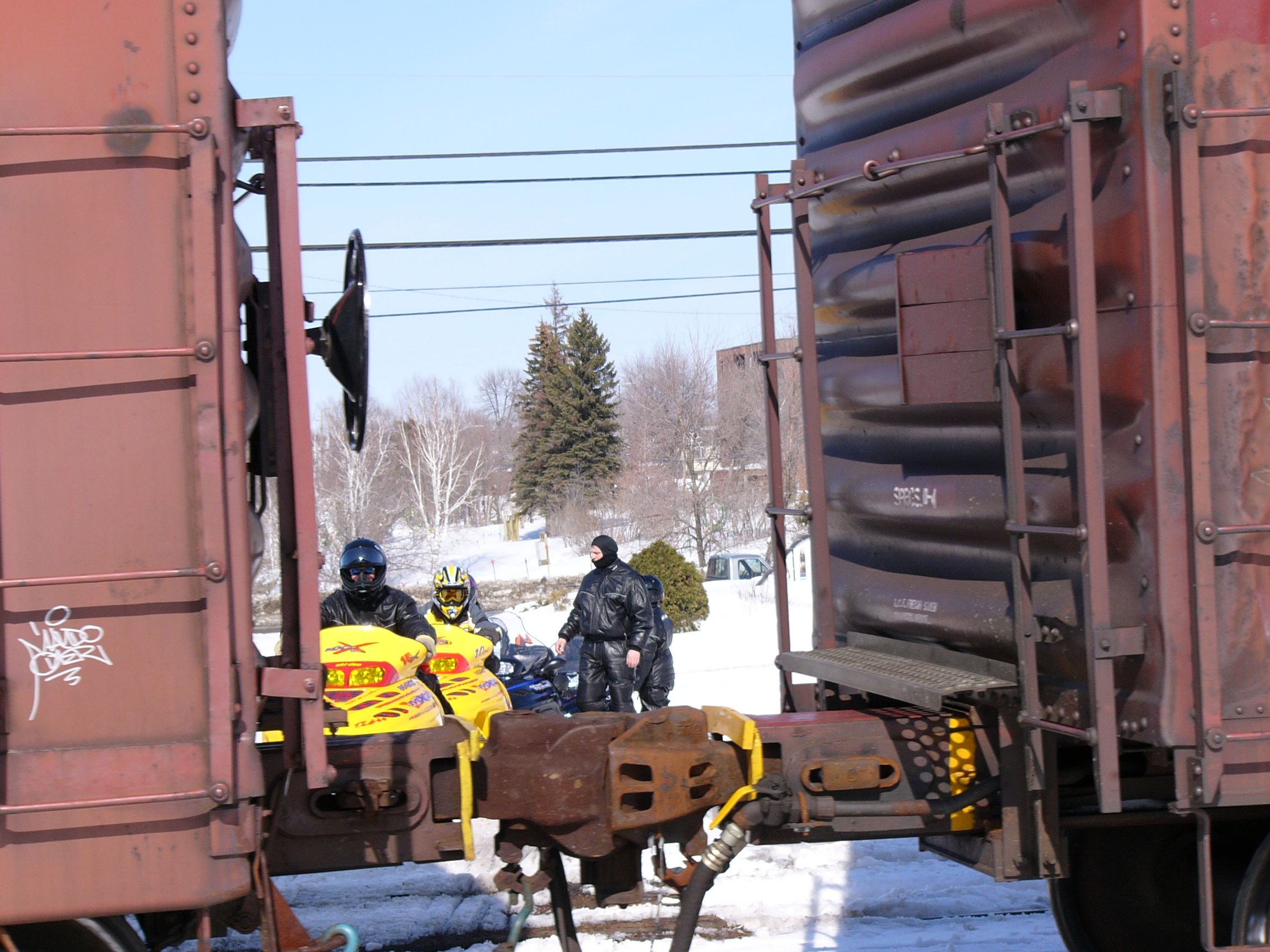 Over the years, I’ve had many different snowmobile trail encounters and here are just a few…

I saw a flash of movement out of the corner of my eye. The trail ran straight as a die along an abandoned railway bed and that startled partridge was beside it. At the last possible second, it flew straight in front of my moving sled. As if there wasn’t a whole wilderness of other directional options to choose from. I had no chance to stop or swerve.

With a sickening thwump, blood, guts and feathers splattered across my hood and windshield, spraying my visor and chest like special effects in some cheesy horror flick. The viscera froze immediately, so I miserably displayed the gory evidence of this untimely demise for the rest of my ride. Later, when a buddy joked that I should have eaten the bird, I replied that if I’d opened my mouth wider, I could have.

Thankfully, my trail experiences aren’t normally this traumatic – usually the wildlife and I co-exist peacefully. However, a few of my experiences underscore the need to be continually wary of unexpected occurrences on the trail.

Recently, we snowmobiled to a restaurant for lunch, returning several hours later along the same trail. I was cruising in the lead, confident that the way back would be as clear as before. Suddenly, an irregularity caught my eye. A large birch tree had fallen across the trail since our last passage!

With hard braking and dexterous steering I was able to avoid a bark transplant. The tree was too heavy to move, so we made a detour, marking the trail with branches to warn other riders.

Generally, grooming operations keep trails free of debris like this. So it’s easy for snowmobilers to be lulled into a false sense of security. I remember when a group of us were riding a beautifully groomed trail. Cresting a hill, we could see our route extended far ahead.

But in a valley immediately below, the trail narrowed to cross a partially broken-through swampy area. Our leader proceeded cautiously, keeping to the intact snow on the extreme right side. My wife was next in line. I encouraged her to take it slow and follow the leader’s tracks.

Unfortunately, I gave that advice and she took it (unusual in itself), because the first sled must have weakened the snow cover. As her machine tipped sideways in a slow motion spill, she tumbled butt first into brackish, foul-smelling mire. Fortunately for her (and most fortunately for me) it was only ankle deep.

After hauling her out, everyone was standing around enjoying the odour at her expense, when I made the mistake of commenting: “Better you than me.” She smiled sweetly and replied with frigid diction: “Yes, but remember, this is your good jacket I’m wearing today, honey – you know, the partridge one!”

Higher life forms than partridges and husbands frequent our trails. Last winter, our group was at the twilight end of a hard day’s ride, when we came upon an immense cow moose and her large calf ensconced on the trail. I couldn’t judge their size exactly.

But from my sled I could see under Mom’s belly, which is more than I can do with mine. Not wanting to disturb these shaggy giants, or reprise my partridge encounter either, I stopped – but every time we did, so did they. Then the cow would make charging motions. Maybe she didn’t like my swampy smell. Or perhaps word had spread about my bird.

We made lots of noise, edged our sleds closer and hung back, stopped and started, to no avail. This was their trail, period. Finally, three sleds tried to zip by while the cow was distracted. Two made it, but one was cut off by the calf and trapped beside the fire-breathing mother.

As she moved aggressively toward the sled, its 6′ 4″ rider leapt assertively to his feet on the running boards, waving his arms, ready to bale out. Startled, she stepped off the trail momentarily. Seizing their chance, the remaining riders whipped by the calf. Looking back, we observed the two indignant behemoths guarding their trail again. Pity the next snowmobilers they met! 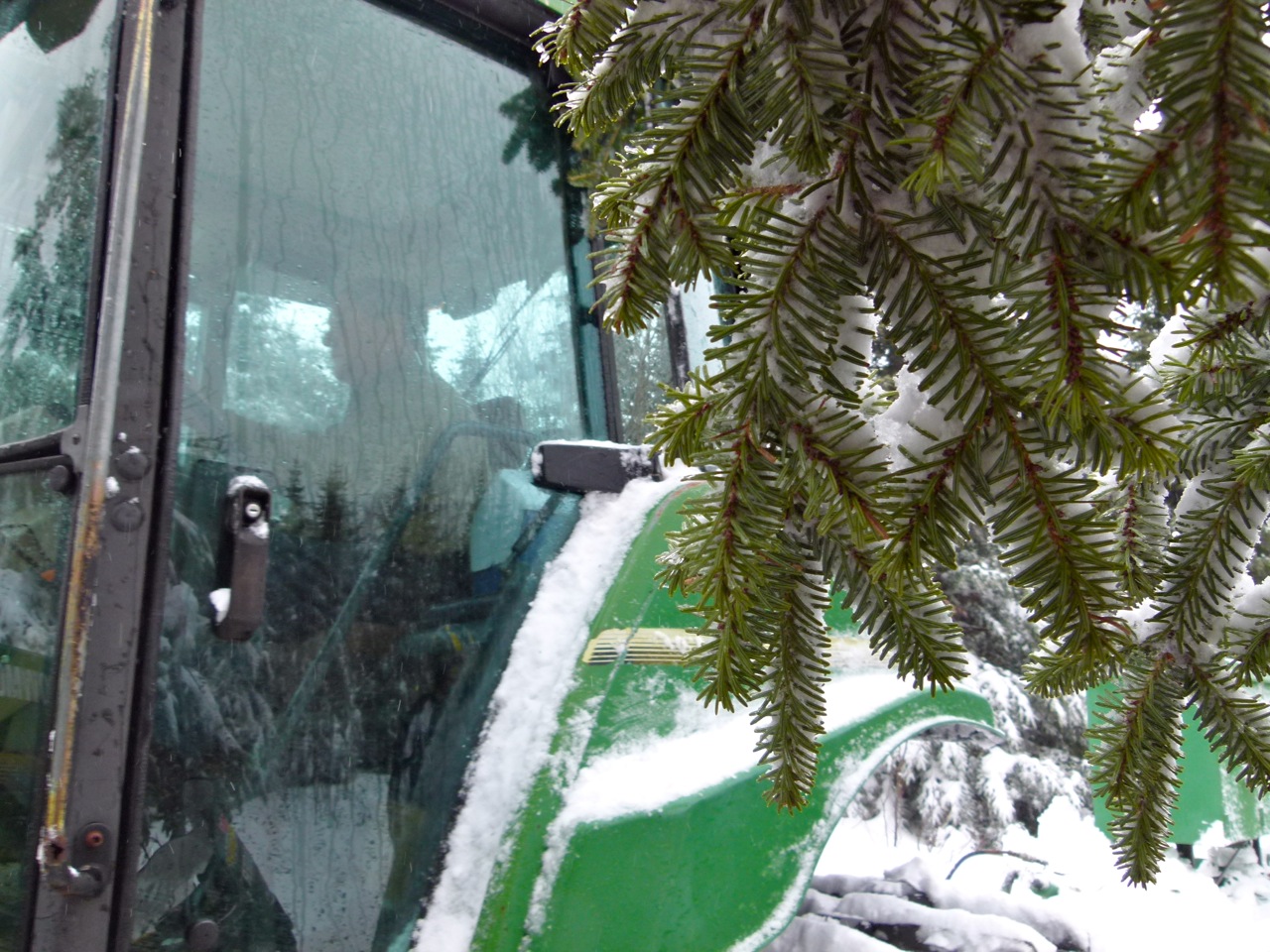 I’ve always dreaded the thought of meeting an oncoming groomer. Last season, my wife and I slowed to negotiate a blind hairpin turn – and were shocked to see an enormous wall of yellow blocking the entire trail.

I barely had time to take in the operator’s wide-eyed face before my Ski-Doo ‘s hydraulic brakes brought me to rest just as my ski tips bumped the lowered blade. While she helped put my heart back into my throat, my wife quipped: “You could have been the partridge this time, dear.”

They say groomed trails always lead somewhere. I’ve followed them to a groomer garage, to an operator’s house, and to where the groomer turned around and came back again. I’ve even followed one that led right down the middle of someone’s driveway, past a dog house and under a clothesline resplendent with their freshly hung laundry.

A wet sheet dragging across my visor reminded me of driving through a car wash. I never did discover whether this was really the trail, but I can attest that their whites were whiter than white – about the same colour as that operator’s face when I kissed his groomer. Or mine when I gave that partridge something to grouse about.

All in all, trail riding has provided me with many unexpected moments of fun and adventure – experiences never captured on any of my trail maps. Maybe that’s why thumbing through my map collection is such a poor substitute for the real thing. It’s time to hit the trails again.