How To Prevent A Snowmobiling Nosebleed… 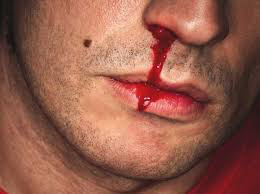 Nobody talks much about a snowmobiling nosebleed. But you’d be surprised how many riders have had one. In fact, did you know that about 60% of the population suffers nosebleeds at one time or another? Nosebleeds are more prevalent in adults over 50, especially during the winter.

Typically, dried out nasal membranes cause nosebleeds. This can easily happen while snowmobiling in cold air with no humidity in it. Sleeping in dry hotel rooms every night doesn’t help either. Being on blood thinners for a heart condition or having high blood pressure can be contributing factors.

However, most nosebleeds usually aren’t serious. You can normally stop a lower nostril (anterior) bleed within 20 minutes or so. Simply apply external pressure with a finger on the bleeding side of your nose.

However, it’s more difficult to control posterior bleeds. Located high up in a nasal passage, they don’t usually respond to external pressure. Thus, such bleeds usually require medical attention such as packing inside the nostril to get under control. So at best, dealing with a nosebleed while on tour can be a disconcerting, frustrating and annoying nuisance. At worst, it can be a scary and even dangerous occurrence.

In part, that’s because recreational activities like snowmobiling often take us away from easy access to emergency assistance. That’s why it’s important to be prepared. Especially to handle unexpected injuries and other medical issues. Good starts include emergency training, carrying a good first aid kit and a cell or sat phone to call for help. So are never riding alone and affixing a Medical Data Carrier to your helmet. It also helps to know where you are and make sure no one leaves home without their prescription meds. To say nothing of always riding with care & control.

Anti-nosebleed measures on tour include carrying a personal travel humidifier to help combat dry air in hotel rooms. You can purchase one at an “As Seen On TV” store. But I’ve also seen them on Amazon, and seasonally at Canadian Tire stores. Due to their compact size, they fit easily in saddlebags.

In addition, consider wearing a protective device such as my No Fog Mask while riding. Such devices shield your nose from direct intake of cold air (as do many modular helmets with breath-boxes). Some riders also go for daily applications of Rhinaris Nozoil Spray (available at most drug stores) and regular usage of a device like MyPurMist to help combat nasal dryness and winter nosebleeds.
Other prevention measures include keeping well hydrated by drinking lots of fluids. Also, homeopathic practitioners say that strengthening your veins & capillaries helps. Eating an apple a day and taking vitamin C, Calc Flour 6X pills and Homeodel Drops for Veins may assist in this regard.

Regardless and just in case, I also give myself extra peace of mind. I do so by carrying something called a Rapid Rhino 750 in my first aid kit. Distributed by a medical supply company called Smith & Nephew, Rapid Rhino is a nasal insertion device. It’s specifically designed to stop nosebleeds that continue despite applying external pressure.

How To Use Rapid Rhino

Despite all your best efforts, you may still get a nosebleed. Here are three products that can stop the bleeding: NasalCEASE, Wound Seal and Nozohaem (to my knowledge, the only one available in Canada). Meanwhile, if you need to apply hands-free pressure to assist in bleeding stoppage, try using a swimmer’s nose clip. All of these products are worthwhile additions to your snowmobiling first aid kit.

Pack It With Rapid Rhino

But what if you need your nose packed to stop the bleeding? In one extreme case I know about, a local clinic medivac’d a snowmobiler to the nearest hospital with an uncontrollable nosebleed. All because the clinic wasn’t able to pack the nostril and stop the bleeding properly.

And that’s why I carry something called a Rapid Rhino 750 in my first aid kit. Manufactured by a medical device company called Smith & Nephew, Rapid Rhino is a nasal insertion device specifically designed to stop nosebleeds that continue despite applying external pressure. That local clinic could have avoided an emergency flight with a Rapid Rhino on hand.

How To Use Rapid Rhino

I’ve seen one in use. So I can attest that Rapid Rhino 750 (they come in different sizes) is far and away the best method for packing a nostril to control bleeding that won’t stop on its own. It’s easy to insert and comfortable to keep in for up to 48 hours.

That’s because Rapid Rhino slides in easily due to its slim profile and self-lubricating properties. Once positioned properly, it’s inflated with air using a syringe (also keep in first aid kit). This makes it fit snuggly. Removal simply involves using the same syringe to suck the air back out of the device. This deflates the in-place Rapid Rhino, so it slides out easily, without sticking.

That’s the good news. The bad news is that unfortunately, Rapid Rhino isn’t a consumer product. That is, not sold direct to the public. Typically, it’s sold for use by hospitals, clinics and medical professionals. An increasing number of these (especially in Northern Ontario) keep Rapid Rhino on hand. But others do not.

However, this product is so good that I want to ensure that a Rapid Rhino is always available if anyone needs it. So, I obtained a small supply through my local pharmacy just in case. And although it’s not recommended to self-treat with a Rapid Rhino, having one in my first aid kit gives me assurance. Plus, it provides peace of mind that I always have it available for any doctor or nurse to provide the best snowmobiling nosebleed treatment possible.

Obtaining a Rapid Rhino isn’t as simple as buying off the shelf. However, your family doctor, local pharmacist or Ear, Nose & Throat specialist may be willing to order some for you through Smith & Nephew. Or even provide one (at your expense).

I realize that this article about snowmobiling nosebleeds won’t appeal to everyone. But you’d be as surprised as I was to hear how many riders suffer this annoying affliction at least occasionally. In fact, you probably know someone who does. It’s just not talked about much. If so, please share my advice with them. This way, they too will have the option of carrying a Rapid Rhino in their first aid kit, just in case.