What Happens To Trails With Too Much Snow… 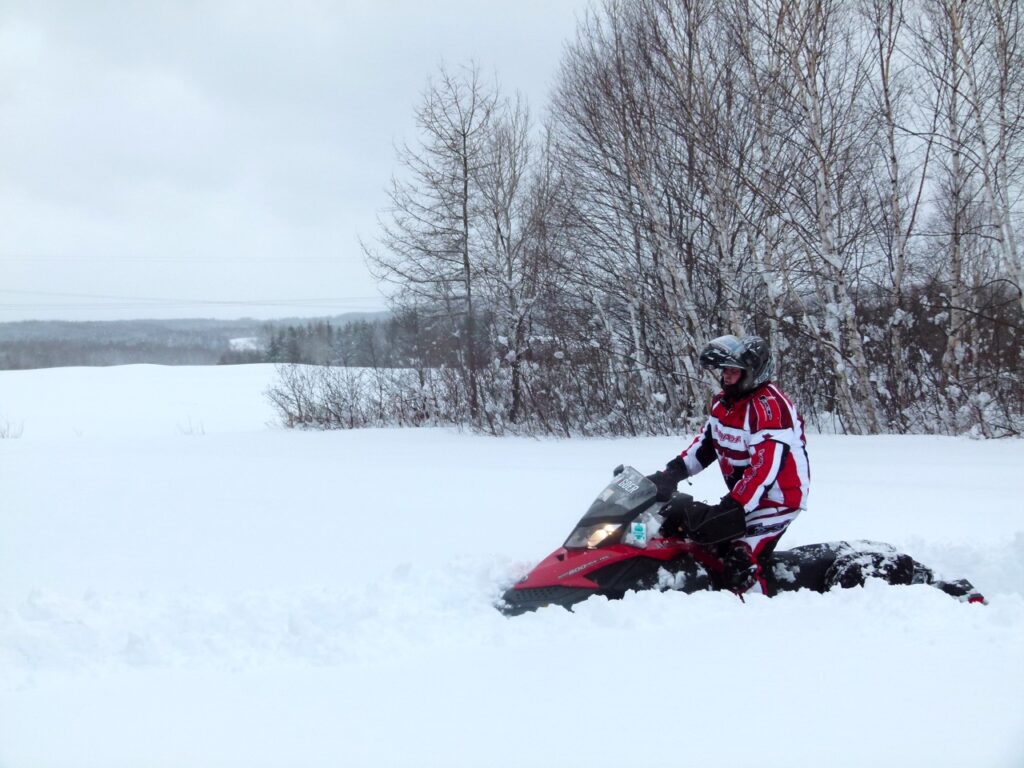 Slow going and hard work navigating way too much snow on the trail. Photo © by Craig Nicholson.

Trail riding is the most labour intensive and costly way of snowmobiling. By that I mean we travel an organized and interconnected system of trails. They are specially and continually marked and maintained for our riding pleasure at great effort and expense. As opposed to backcountry or mountain riding where exploring untouched deep powder areas is the primary mission. 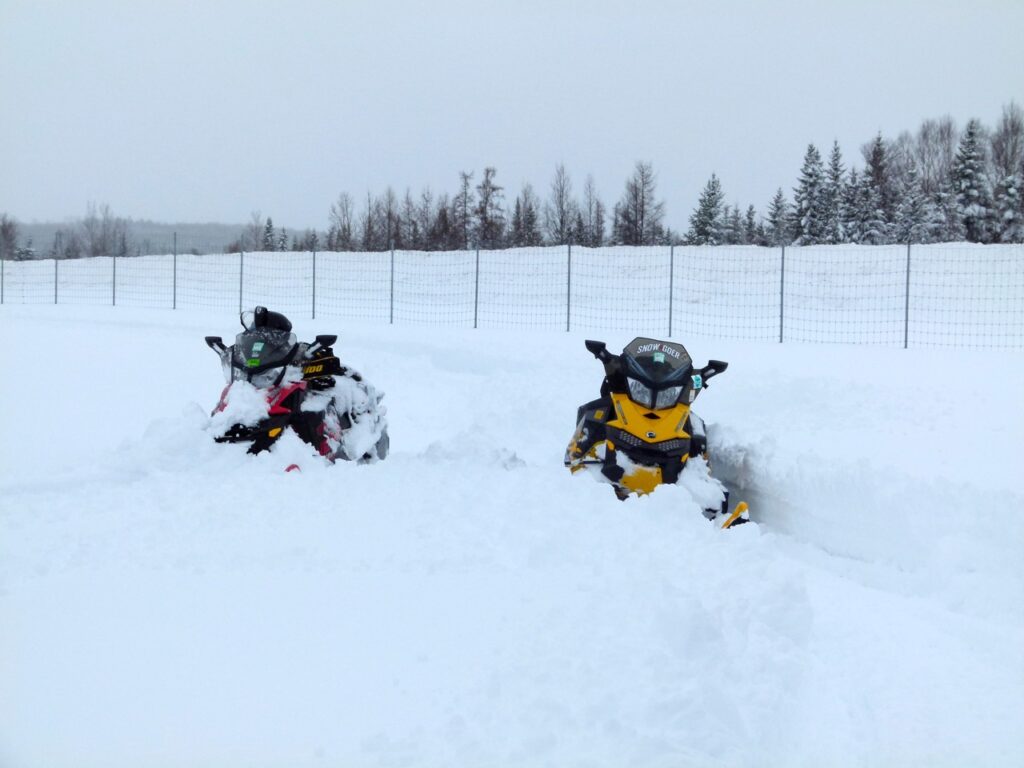 So where did that trail go? Photo © by Craig Nicholson.

So while a major snowstorm is every backcountry rider’s dream, it can wreak havoc on our trails. Suddenly, everything we expect and take for granted about trail riding comes to a crashing, albeit temporary halt. And we find ourselves in unfamiliar and possibly even dangerous circumstances. Circumstances that many of us aren’t really fully cognizant of, prepared for or experienced in. After all, our primary interest is in riding groomed trails! 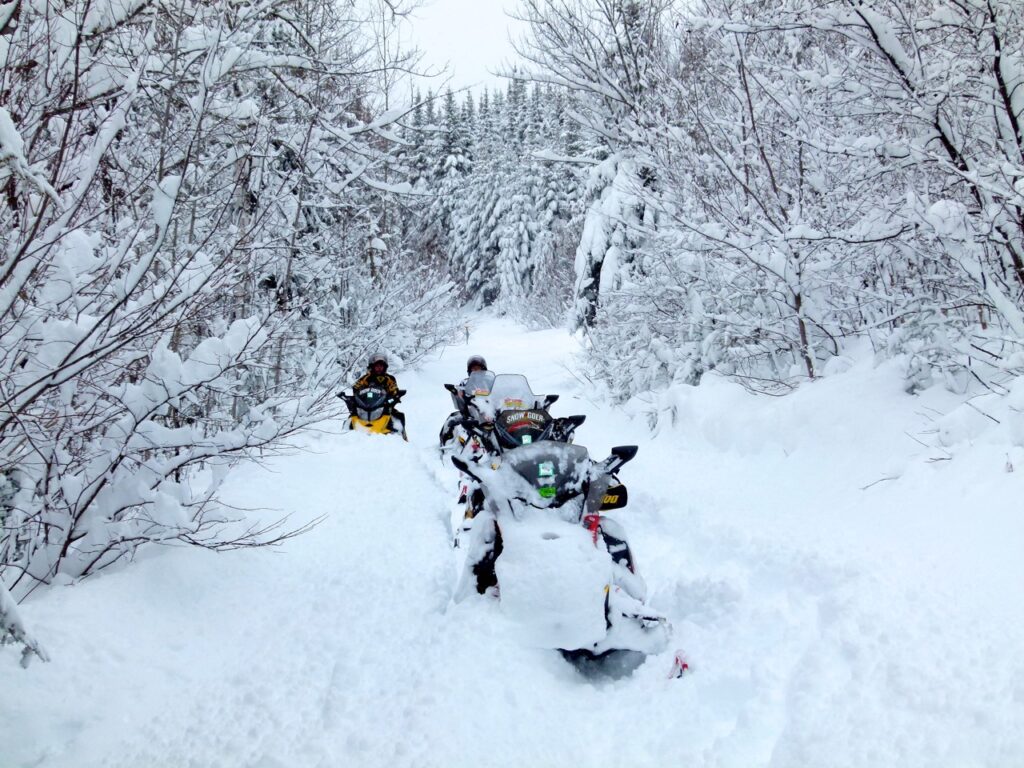 Breaking trail in New Brunswick after the storm. Photo © by Craig Nicholson.

For example, I remember one time riding in New Brunswick after a major overnight storm. We set out next morning naively expecting to be able to negotiate the snowy trails. Wrong. In many places, they had simply vanished. What we had hoped would be an 8-hour day stretched into 10 interminable hours of continually getting stuck. As a result, our exhausted crew barely made it to overnight at what had been our planned lunch stop!

The first clue that a dramatic storm has impacted snowmobile trails is weather and news reports confirming that a predicted snowstorm was as bad or worse than forecast. These commentaries include continuing public safety alerts, warnings to stay off roads, highways closures, and school bus cancellations. Often, way too much snow also temporarily immobilizes entire cities and towns. When you hear reports like these, odds are that snowmobile trails are also adversely affected. 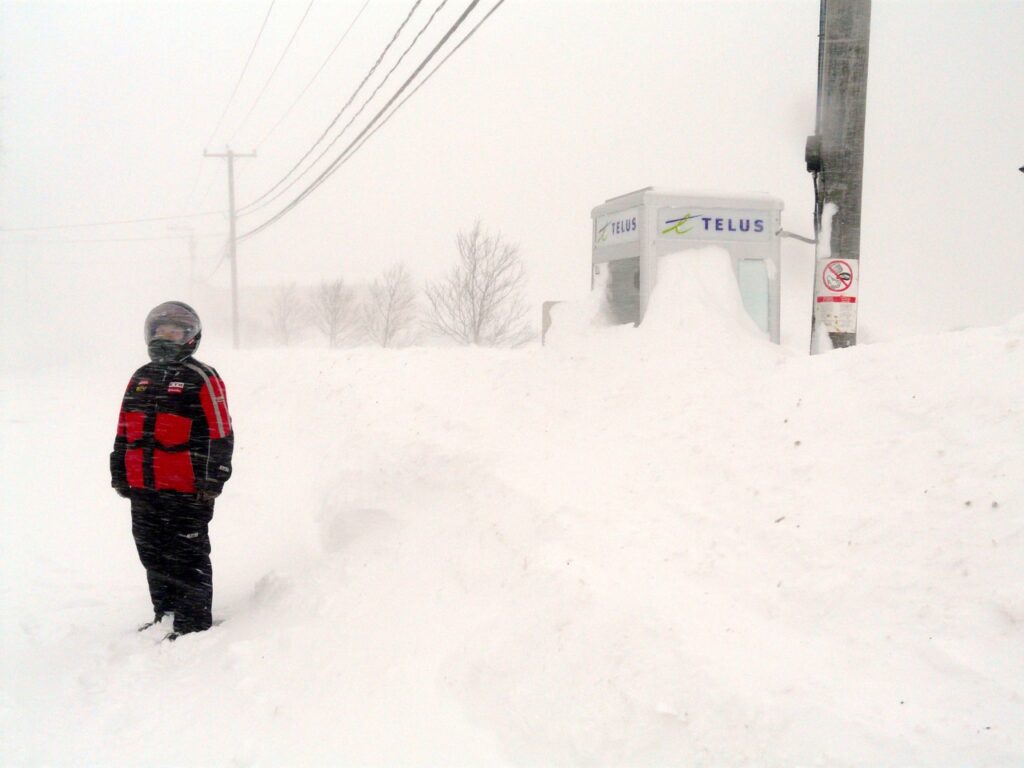 Main street of Percé during the storm. Photo © by Craig Nicholson.

I experienced this phenomenon on a Gaspésie tour. The entire community of Percé simply shut down for two days with no roads or trails available in or out of town. Nothing and no one moved on the streets.
When we tried to find the trail from a snow-closed road, all we saw was the tip of what might have been a STOP sign. And an impenetrable wall of unbroken snow where the trail was supposed to be.

What Warnings Mean for Trail Riders 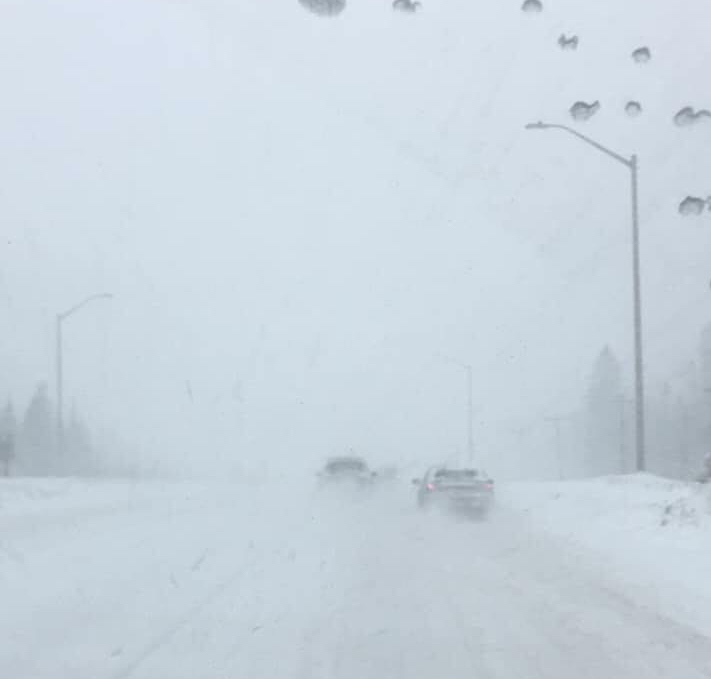 The media storm updates also mean that it probably won’t be easy or even safe for snowmobilers to trailer to new snow right away. Roads are not only snow covered, but also even more treacherous thanks to whiteouts, drifting, slow moving ploughs, accident scenes and huge snow banks.

The reports also mean it’s likely that the services we need and expect – fuel, food and lodging – may not be available either on the drive to our proposed destination or from the trail. I’ve experienced this first hand while on the trail, when gas stations shut down due to storm-related road closures.

So even though we were still able to ride, suddenly we couldn’t fuel up anywhere to get to our intended destination. In addition, it’s also probable that any touring snowmobilers, already tucked into their accommodations for the night in the affected area, won’t be able to get far or possibly anywhere the next morning. So, they stay over an extra night, and that means the hotel you are going to may be full when you arrive. 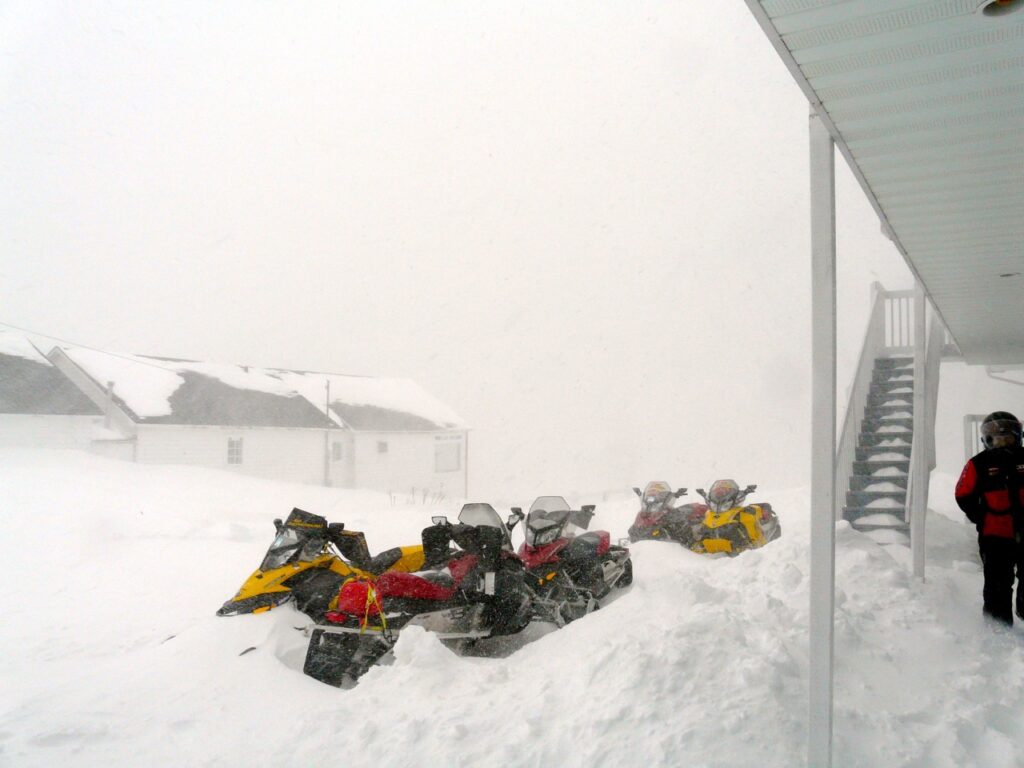 We got the sleds cleared off, now to dig them out! Photo © by Craig Nicholson.

This happened to me in Matane. We woke up to a major dump and contemplated taking our chances on the trail. But then two snow-covered riders on mountain sleds exited the nearby trailhead. They’d left earlier and had to turn back after less than an hour of brutal trail breaking. Turns out the trail was mostly impassable, even for these ultimate snow sleds!

Post storm, it’s going to take many hours, or even several days, for professional snow ploughing crews to clear engineered highways and streets. So you can bet getting natural environment trails back into shape is going to be as much if not more of a challenge. Especially for clubs with limited equipment at their disposal.

And remember, club volunteers first have to dig themselves out of their own buried homes and neighbourhoods. Only then are they available to do anything about many kilometres of obliterated local snowmobile trails. 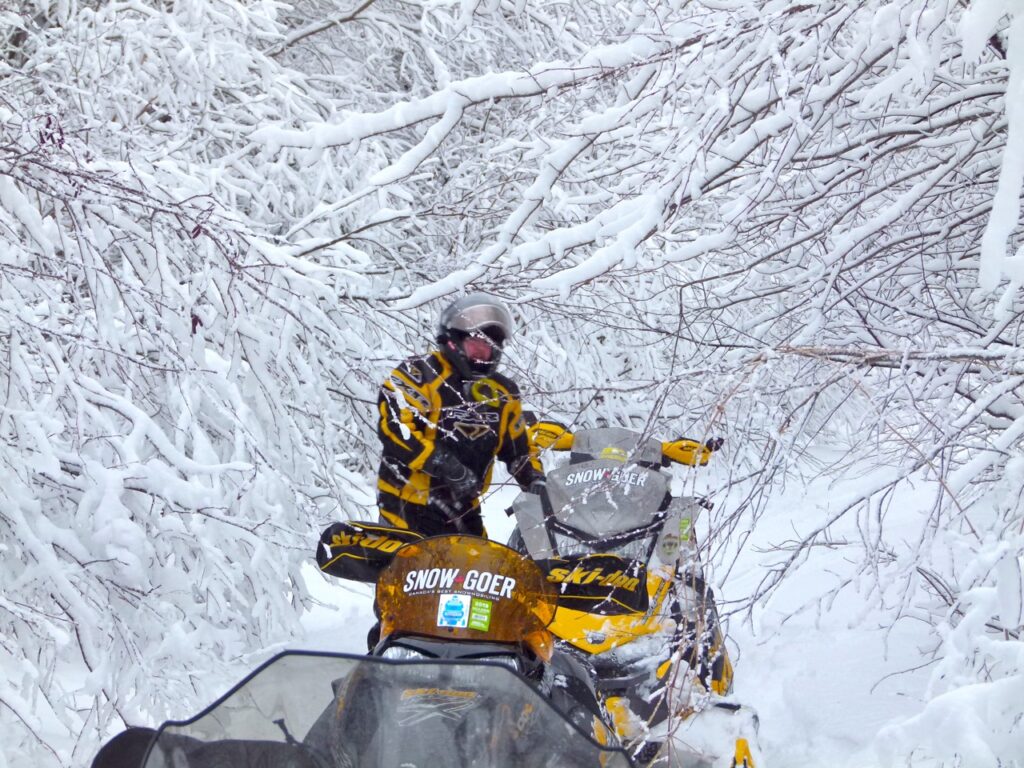 Heavy snow weighs down branches to block the trail. Photo © by Craig Nicholson.

So what actually happens to snowmobile trails during a major snowstorm? Obviously, a huge whack of fresh snow buries everything. A deep enough covering can quickly wipe out the existing trail. This makes it impossible to find, much less follow.

Signs and stakes disappear under a barrier of snow. So does any evidence of previous grooming. That means no trail edges or a hard-packed surface to follow. Meanwhile, staked lakes with previously packed surfaces suddenly become slush traps under the weight and insulating effect of the new snow.

A trail alongside a road or in a ditch may be quickly piled high with snow moved off the road by ploughs. Or from people’s driveways. Huge snow banks can quickly block a snowmobiler’s ability to see oncoming traffic or to be seen by other vehicles. 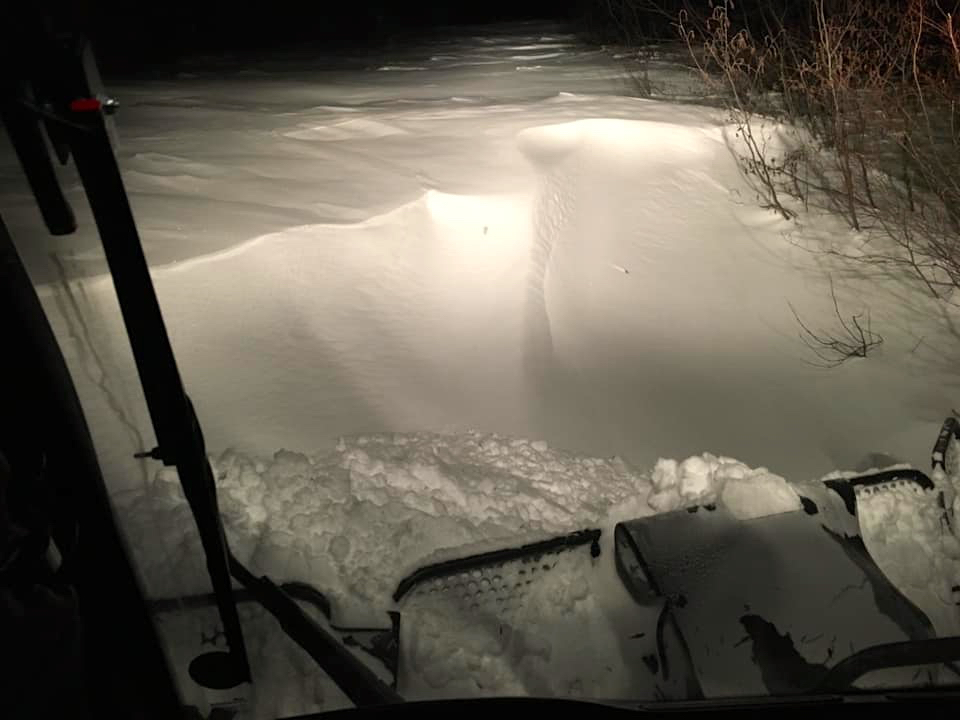 Way too much snow for easy trail riding!

If it’s been or still is windy, massive drifts many times deeper than surrounding snow can pile up across many sections of trail. Especially in open areas with no protective windbreaks. Branches and trees can come down to exacerbate any blockages, many of them hidden under the new snow.

Snowstorm Snowmobiling Tips – What To Expect

Finding and navigating post-storm trails can become an arduous and exhausting task. One made even more difficult by the fact that most of our sleds (or us) aren’t deep snow capable. And by total uncertainty about where the trail really is, now that it can’t be seen in any way. 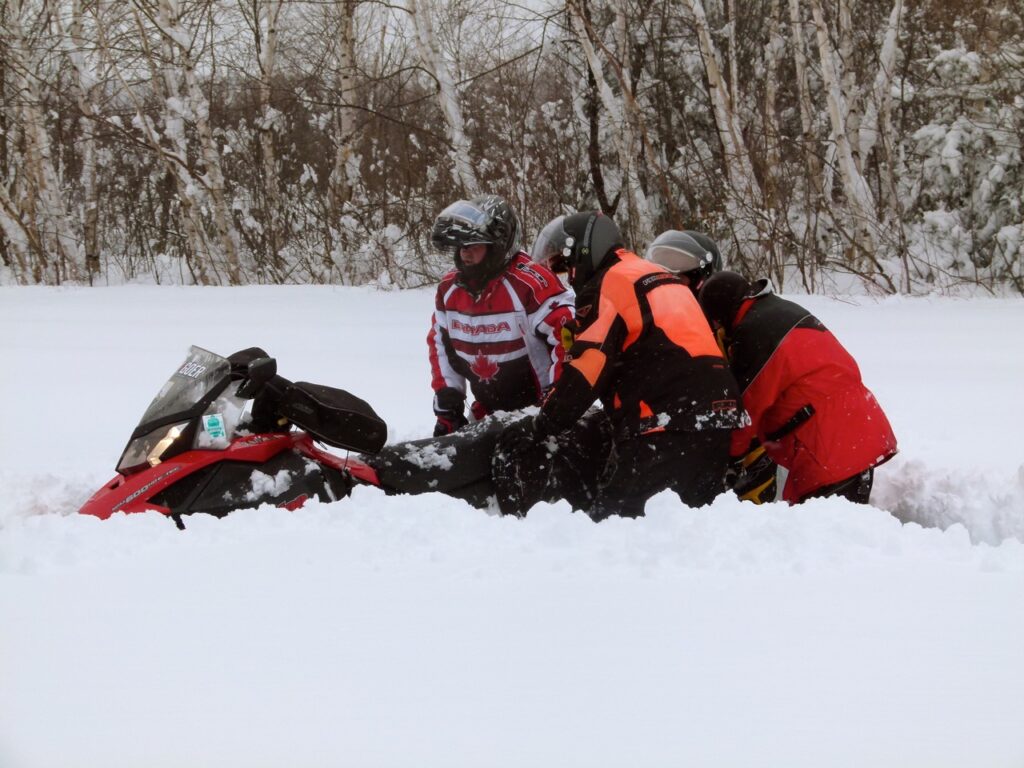 When trails are snowed under, getting stuck happens often. Photo © by Craig Nicholson.

Post storm riding isn’t for the faint of heart, novices or those who may be less fit. That’s because what is absolutely certain is getting stuck numerous times. And even getting lost. So if you must go, it’s imperative to ride with several other capable and experienced riders, never alone. Plan to ride a shorter distance than normal. Carry a shovel and two ropes. And check out my Tips For Staying on the Trail in Bad Weather before you go! 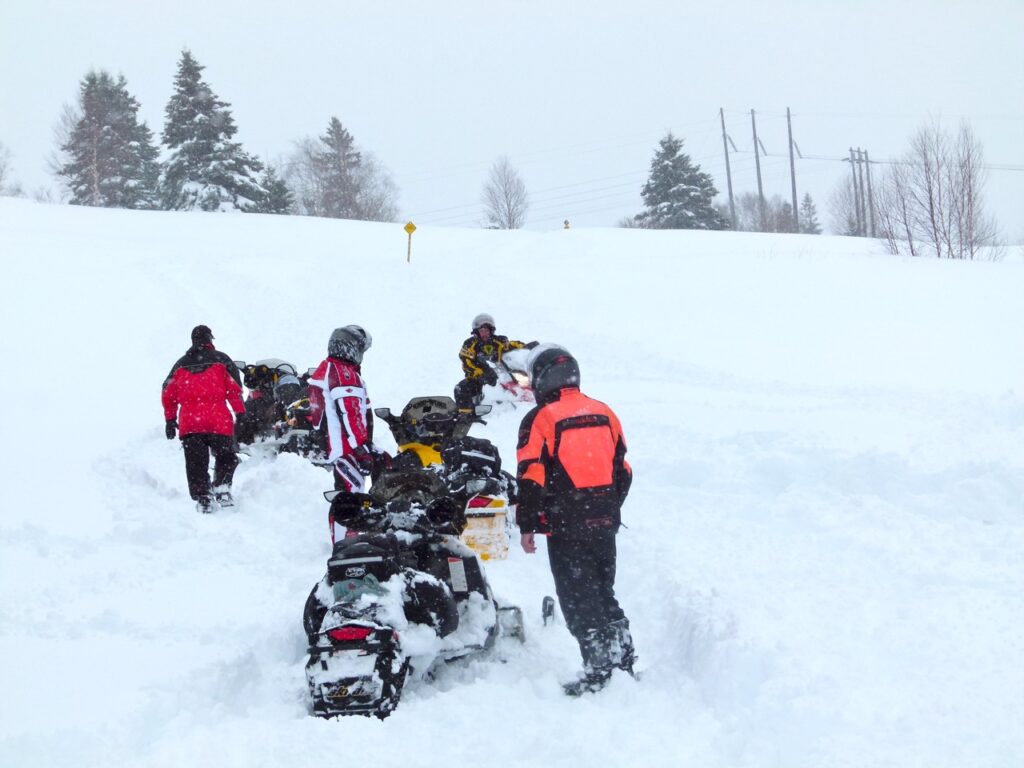 Trails can be obliterated, especially across open areas. Photo © by Craig Nicholson.

And also carry extra gas. Why? Because you’ll be burning more than normal and may not be able to top up as easily as usual along the way, if at all.

I remember one trail ride along the north shore of the St. Lawrence River in far eastern Quebec. It had snowed overnight, but not what I considered to be significant. So we decided to continue our journey east. Big mistake. As soon as we got into the wilderness, wind-whipped drifts blocked the trail in many places, slowing us down again and again.

The tough going also consumed much more gas than expected. To the point that we were soon running low in the middle of nowhere. Luckily, a guided tour ride came through behind us carrying extra gas. Imagine our relief that they also led us out of the mess we were in. Lesson learned.

At the same time, don’t count on a quick rescue from emergency responders if you get into more storm-related trouble than you can handle. They’ll already be fully occupied elsewhere dealing with other storm priorities.

Riding Next Day Can Be Worse 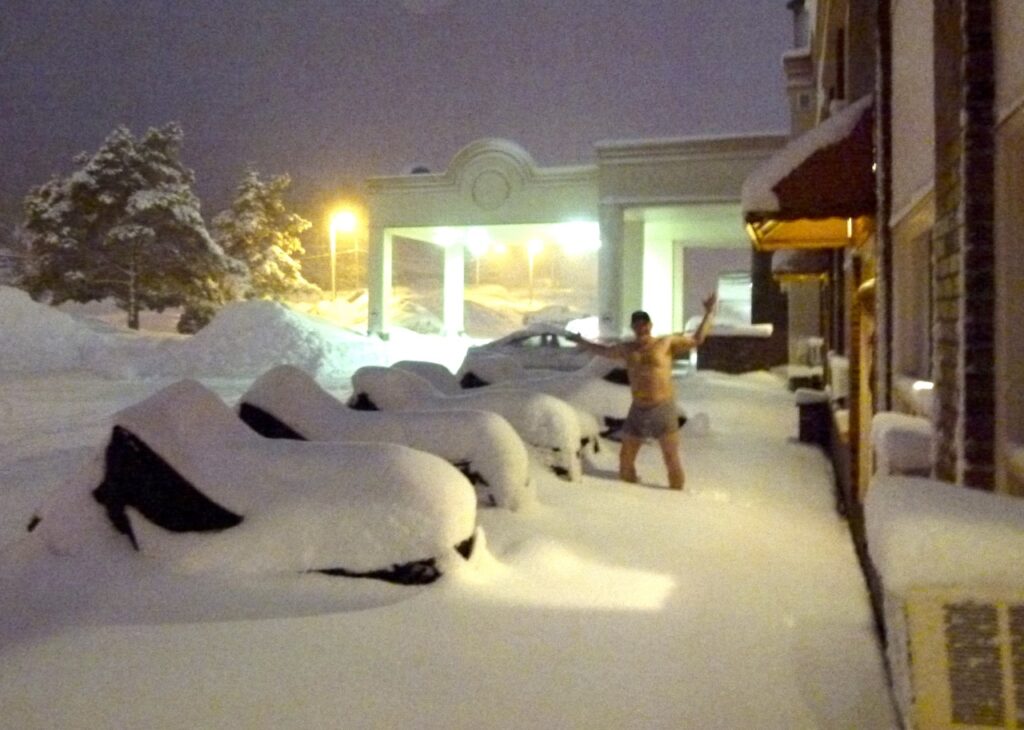 Next day trail conditions are typically worse If a storm happens overnight. This is because, unlike during a daytime storm, no one has been out riding. So no one has done any trail breaking. Or leaving tracks to show the way through.

Snowstorm Snowmobiling Tips – What To Expect From Clubs 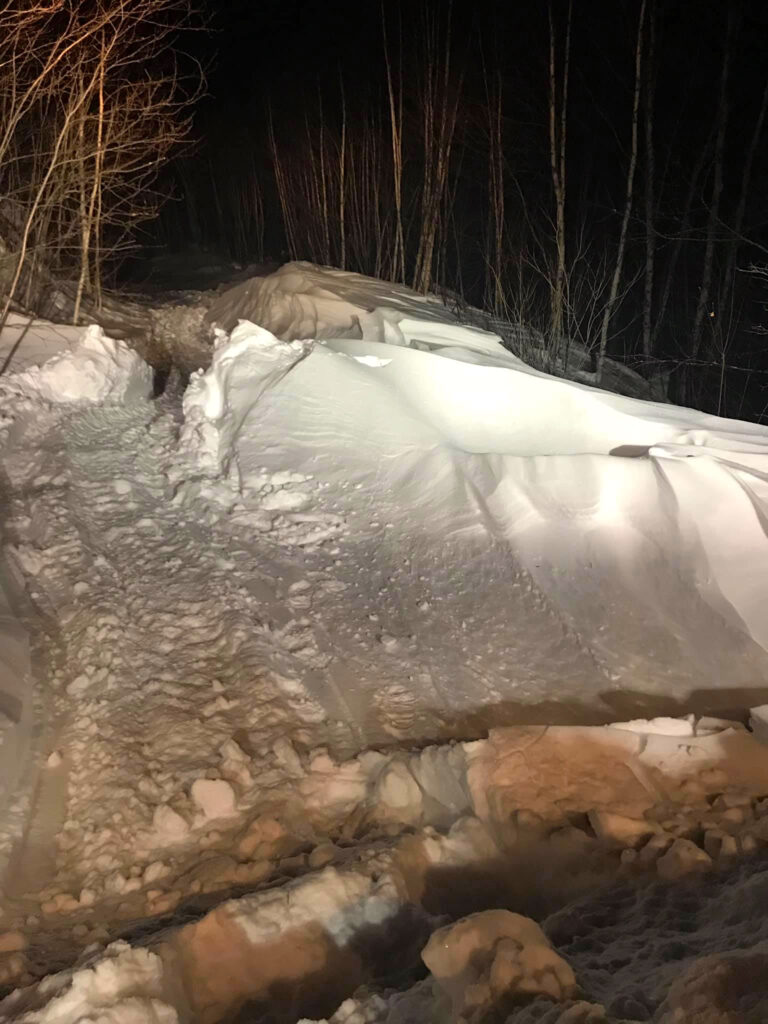 Dealing with too much snow a tough job. It’s very difficult for groomer operators to actually spot and stay on the previously groomed route. This is one reason why stakes and sign posts are so important as navigational markers for groomer operators – if any are still visible in the deeper snow.

Depending on available equipment, a club may have to send groomers out for a first break-through pass. This simply opens the way with the front blade. It also does some preliminary packing with the groomer tracks.

Thereafter, the next go-round can include pulling the drag to flatten and smooth a newly packed trail surface. All of this takes considerably more time than normal groomer runs because it’s very slow going. Considerable care and skill is also necessary to avoid storm related mishaps or equipment damage. Riders also need to be very careful about meeting groomers. 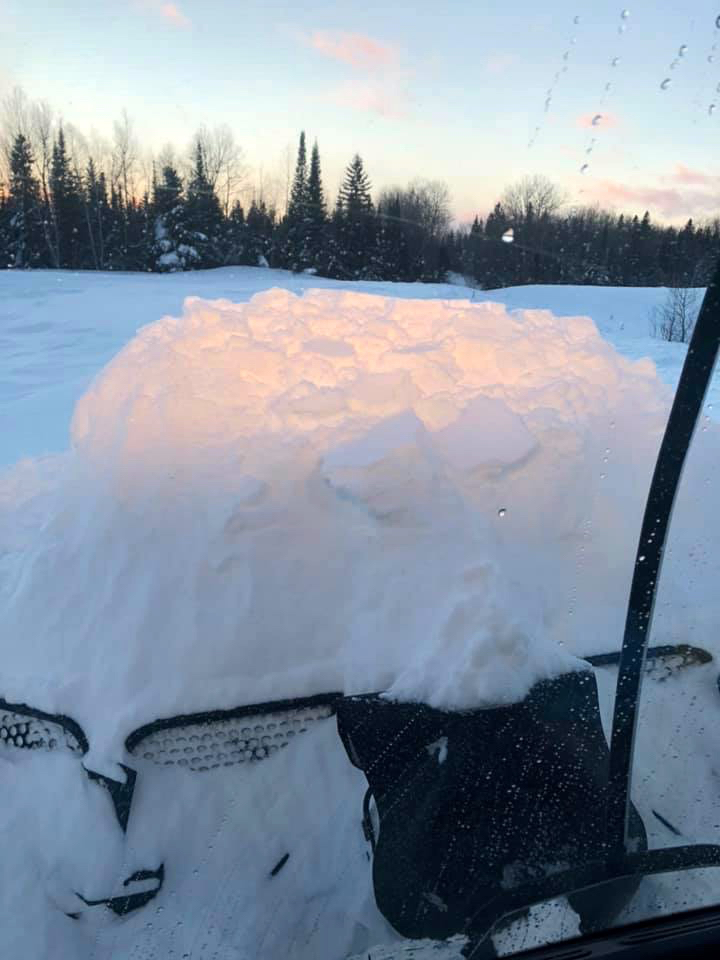 Tough going ahead for this groomer!

Facing these challenges and for safety sake, it’s no wonder that many clubs chose to switch their previously “Available” trails to “Unavailable” until their groomers can make them passable again.
But be patient waiting to see changes to online tools like interactive trail guides and trail apps. Everything takes considerably more time to fix on the snow and then to post after a major storm. That’s because the first priority is getting the trails up and running again, not doing status updates. 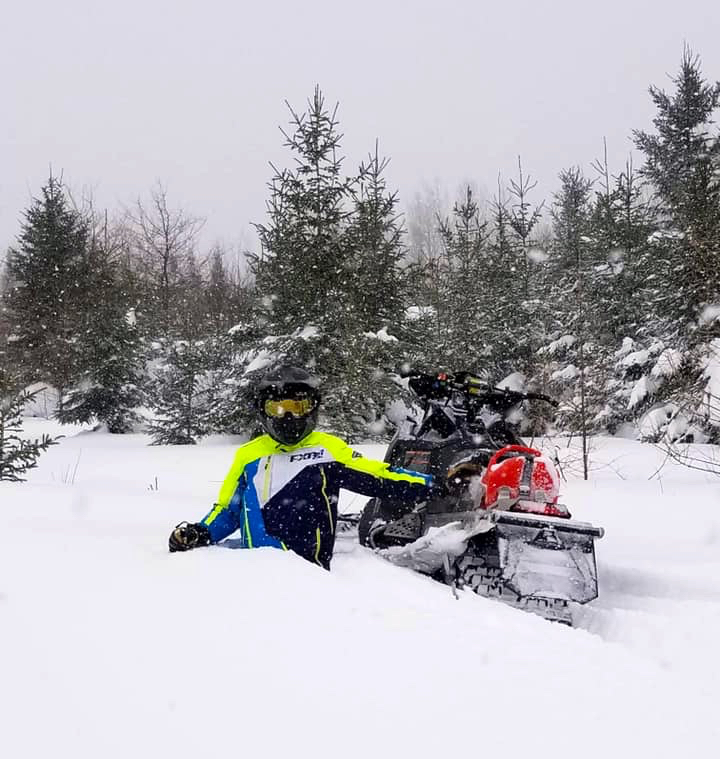 Am I standing on the trail yet?

Of course, if the major storm occurs before trails are available for the season or after a big meltdown has shut things down due to lack of snow, then some of the variables are different. There is no pre-existing trail base to pack the new snow on. Deep early season snowfall may delay or prevent proper ground and swamp freezing. And depending on new snow consistency, it may or may not make a durable trail base foundation for the season. So post storm trail riding in this circumstance also requires extra early season caution. 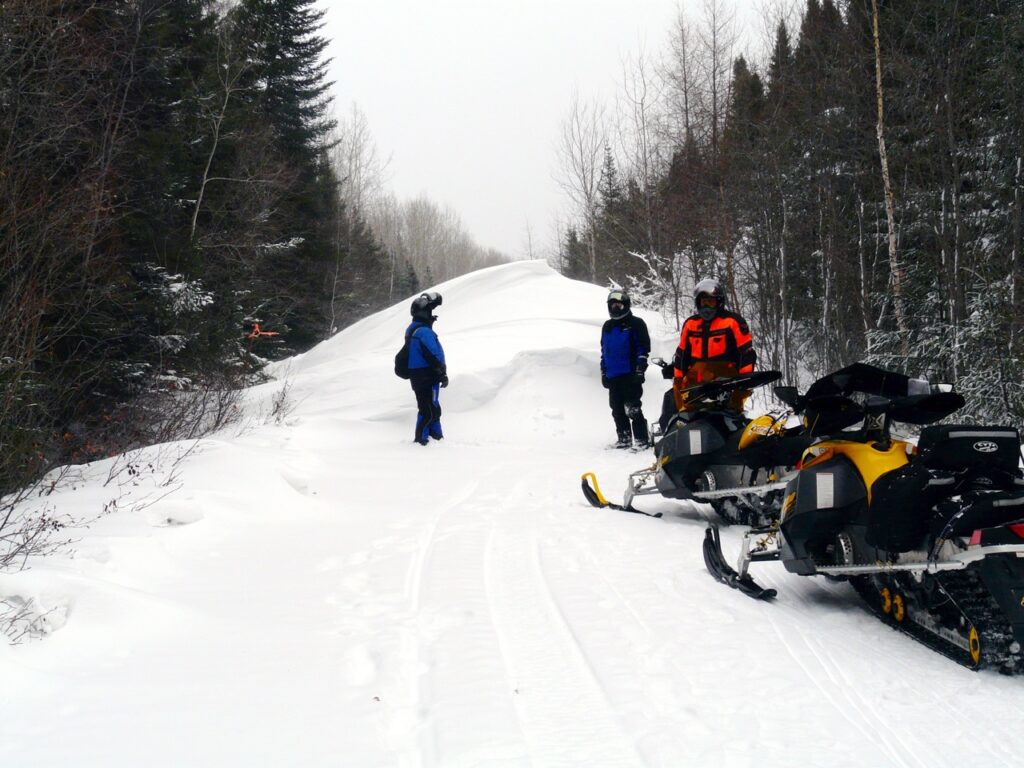 Trail riding snowmobilers have a serious decision to make after any snowstorm. To go or not to go – when and where. It all depends on the amount of snow that’s fallen in the one storm event. And the actual trail conditions at your proposed destination.

After all, snow machines are built to conquer snow. But even modern snowmobiles can be overcome by a huge snow dumping. And there’s nothing more useless or less fun than a sled that’s continually getting stuck on the trail because there’s simply too much snow. So chose the time and place of your post storm trail riding carefully and analytically to keep it safe and fun. Yes, some of the best riding can occur after a major snowstorm. But only if you make smart choices!