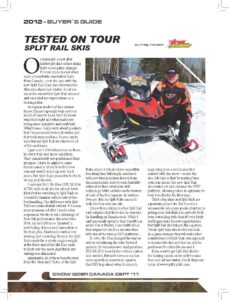 I’m revisiting Split Rail Skis. Five years after my previous review, I’m just as impressed today as I was then for a snowmobile tour or snowmobile vacation. I tried an experiment over the past two seasons. It involved using the same set of Split Rails for over 10,000 kilometres of riding each season. And after more than 30,000 klicks, they are still doing the job. Here’s a quote from my previous review that sums up in a nutshell what I thought (and still do) about the benefits of Split Rail Skis:

“The difference with Split Rails was immediately evident. It became more pronounced after I made a few suspension tweaks to take advantage of their full performance characteristics. First, my sled felt more “planted” – a new feeling of increased connection to the trail. Plus, I had more control over steering and cornering. Second, the Split Rails made the 4-stroke engine weight at the front-end of my Ski-Doo seem to float over the snow. And third, any darting was eliminated.”

These are big advantages. Especially for female riders who may not have as much upper body strength. Split Rails are a premium priced ski. But serious riders pay special attention to getting your sled dialled in perfectly to fit your own riding style. So it’s very likely you’ll appreciate the new opportunities that Split Rail skis bring to the equation. I think Split Rails skis are the real deal. As a game-changer, they will make other manufacturers rethink their own approach to snowmobile skis. And that can only be good news for riders like you and I.

I had the opportunity to interview Split Rail Ski inventor Rob Wrightman We chatted about where the Split Rail idea came from and how it works. Check it out…