What To Know About Riding in Snow Dust… 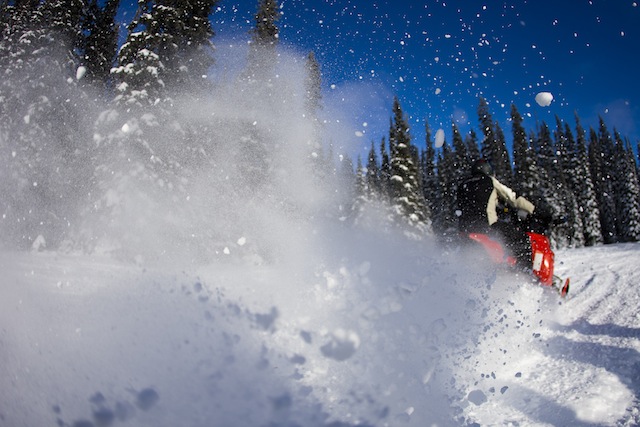 What do you know about snowmobile snow dust on your snowmobile tour or snowmobile vacation? Most of us take being able to see well for granted. We rely on good sight for most aspects of daily life.

Being able to see is never more important than while snowmobile trail riding. Our eyeballs are integral to such crucial snowmobiling factors as quick reactions, good judgment, terrain assessment, depth perception and even our enjoyment of the experience. But too often, we ride with our snowmobile safety threatened by limited vision.

It happens in many ways. Poor visibility can occur due to heavy falling snow, poor light at dusk, sun glare, visor and/or glasses icing or fogging up, or overdriving your headlights after dark. In each case, we suffer some degree of impairment to our normal vision. It can be annoying, frustrating, scary and dangerous for safe snowmobiling. I suspect that impaired visibility causes more than its fair share of troubles and tragedies, and among the worst of many offenders is snow dust.

What is Snow Dust? 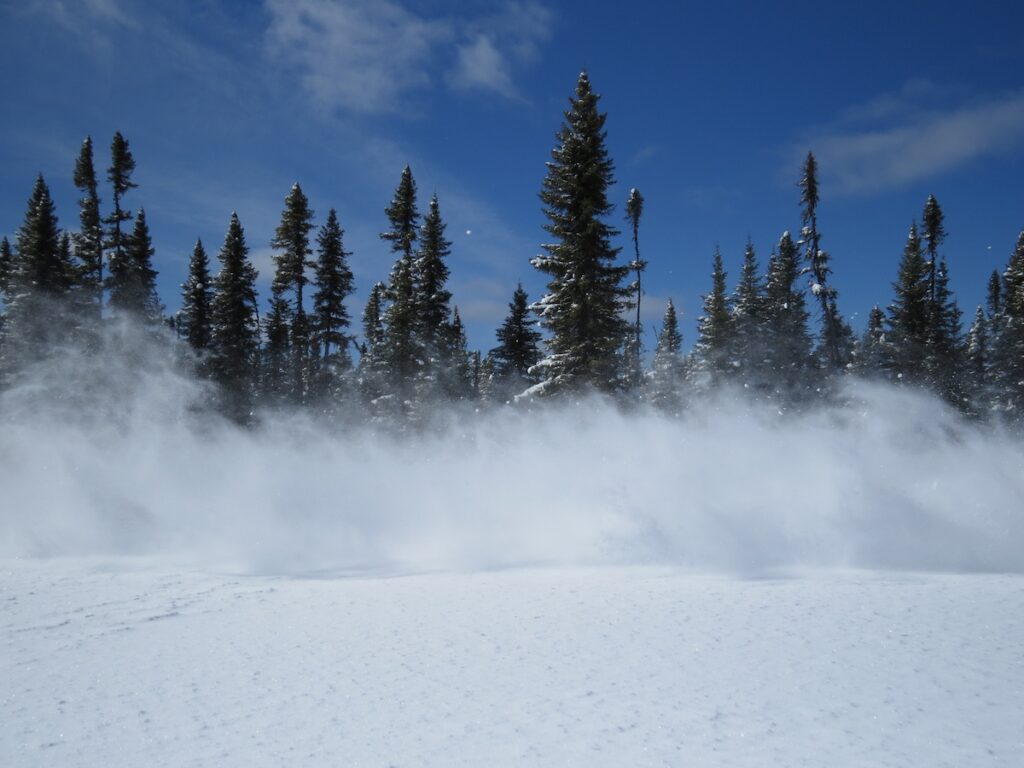 Snow dust is the white cloud that’s thrown up behind a sled by a quickly rotating track. Typically, snow dust is more prevalent on dry, cold days. When it’s not windy, that cloud of snow can hang in the air for several minutes after a sled or sleds have passed. When this cloud occurs behind each of several sleds following in a line, its combined effect can be like a white out. This sudden loss of visibility that can be very disorientating and threaten snowmobile safety.

What Happens in Snow Dust? 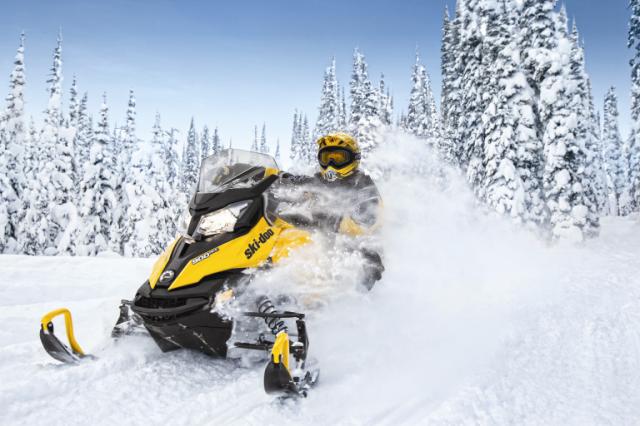 Riding in snow dust requires special caution for safe snowmobiling. Usually, the lead rider can see very well, because the snow cloud is all behind. With no visibility issues, the leader sets a pace suitable for a clear day. Meanwhile, each successive following rider is having increasing visibility problems while trying to keep up. This sets up a very dangerous riding scenario for all those riding in the pack, especially when anyone is following too close.

In certain conditions, particles of flying snow can also stick to your visor, compounding your difficulty in seeing properly. It’s tough to stop in time for a road crossing, obstacle, buddy’s sled or anything else when you’re braking distance is longer than how far ahead you can actually see.

Another scenario for snow dust is when your group meets oncoming sleds. First, your leader will encounter reduced visibility. Then, the snow cloud added by the oncoming riders to the snow dust you’re already creating can make visibility even worse for several moments. Worst case, if you’re already riding too fast and too close in your own snow dust, you may not even see the oncoming sleds until they are upon you. That’s another great reason is to always stick to the right side of the trail for safe snowmobiling.

Snow dust from other sources can also affect your visibility. I know of tragedies when riders trying to cross a road were hit by a second vehicle they couldn’t see because of snow haze thrown up by the first one. Similarly, snowmobilers have ridden into the path or side of an oncoming train obliterated from their view by its own white out.

How To Handle Snow Dust 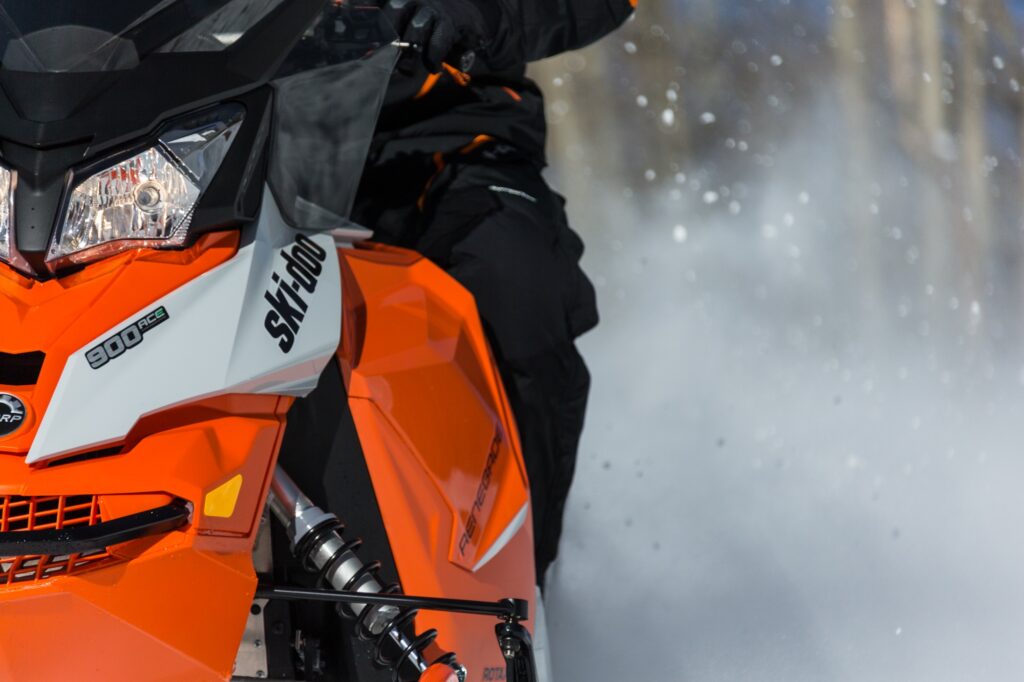 Snow dust is a fact of life in trail riding. What happens depends on how you adapt your riding to avoid trouble. There are several ways to deal with it. One is for everyone to slow down to a pace where snow dust is less of an issue. Another is to significantly increase the space between riders so that it has a chance to settle and no one is riding through the snow dust of the rider ahead. This may mean riding out of sight of the rider ahead (and behind). But as long as everyone stops at intersections until the next rider arrives, no one will be abandoned.

I also wear an FXR snowmobile jacket that’s brightly coloured in the upper back and shoulders. I also wear a bright yellow helmet. The colours sit high enough to make me more visible than the black that so many wear. The red light in my Oxygen helmet also makes me much easier to follow. 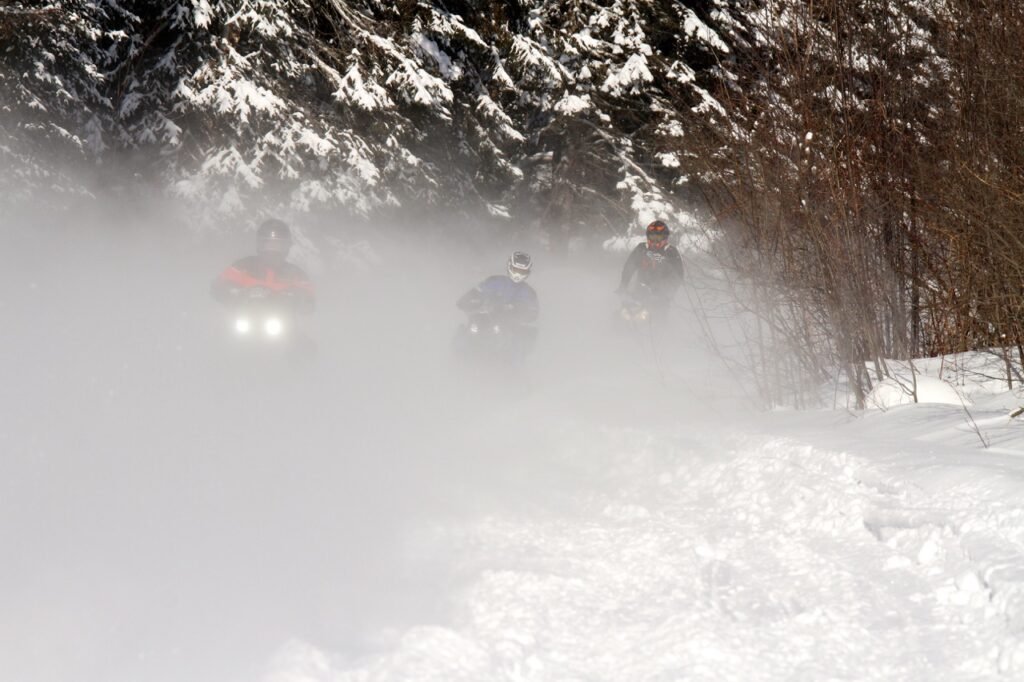 By looking in my mirrors, I can quickly tell if snow dust is an issue. If I can see the rider behind easily, then I can be seen too. If I can’t see anyone behind me for a cloud of snow, then I know more caution than usual is required. So I start slowing farther back than normal for any stop to reduce my snow dust so the rider behind can see a few seconds sooner. If I meet oncoming sleds, I signal very assertively that there are more riders behind so the other leader gets as much advance warning as possible.

No one can see well in a snowy haze. It’s tough to see the rider behind you. It’s equally hard (and even more dangerous) for oncoming riders to see you as your sled suddenly emerges from that fog of snow thrown up by the sleds in front of you. One quick tip is to ride with your high beam light on. It’s brighter and easier for others to spot than your low beam.

Good common sense says that when visibility is reduced, riding with care and control is more important than ever. So the next time you encounter snow dust or any other visual impairment, think snowmobile safety and take it easy!