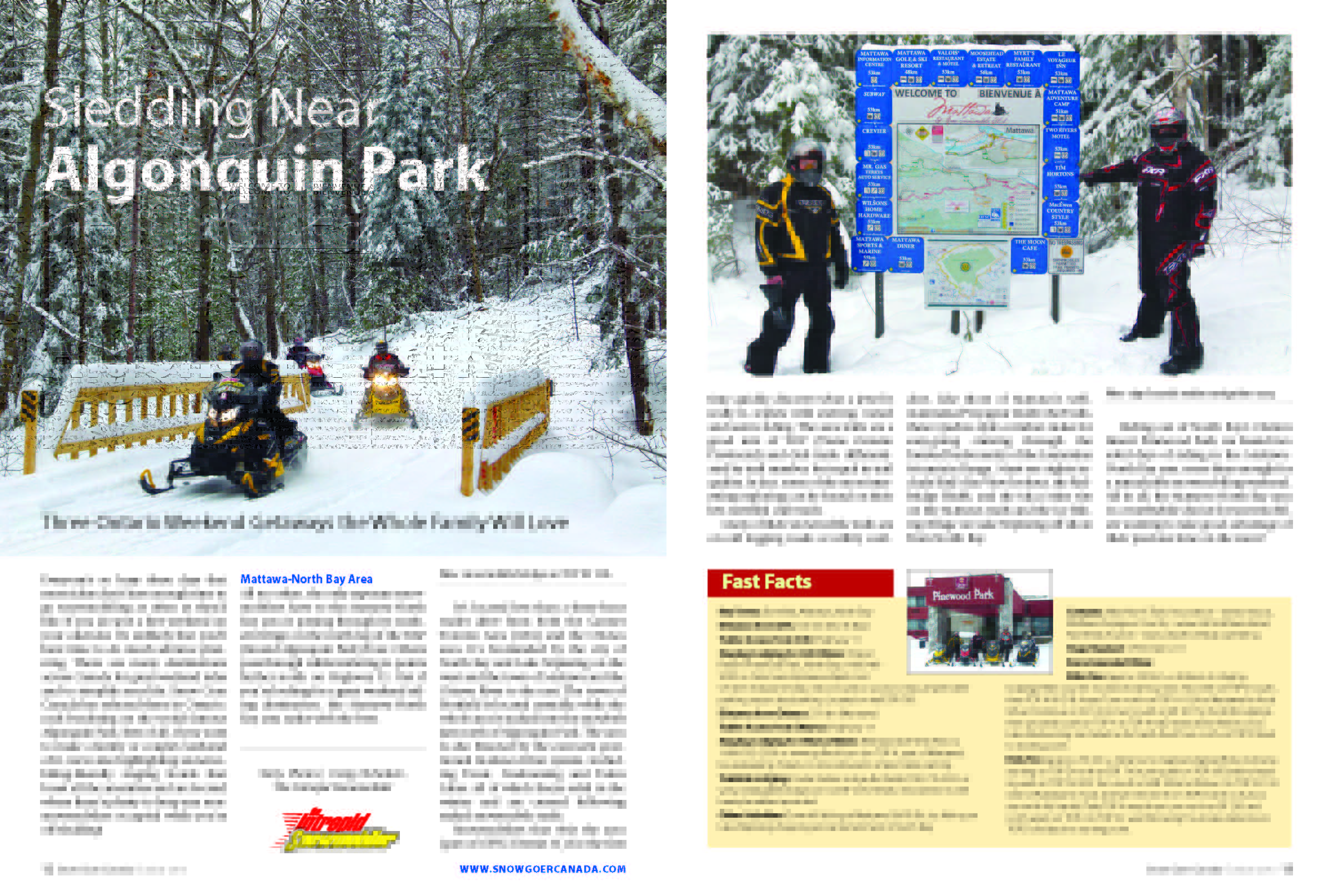 Why not go snowmobiling near Algonquin Park in areas like the Near North, Ottawa Valley and Haliburton Ontario? These snowbelt regions can make your next Ontario snowmobile tour or snowmobile vacation special.

Everyone’s so busy these days that most riders don’t have enough time to go snowmobiling as often as they’d like. If you do spot a free weekend on your calendar, it’s unlikely that you’ll have time to do much advance planning for your Ontario snowmobile tour.

There are many destinations across Canada for great weekend rides. And to simplify your life, I’ve selected three in Ontario. Each borders on the world famous Algonquin Park where snow conditions are typically good. Best of all, if you want to make a family or couples weekend of it, I’m also highlighting snowmobiling-friendly staging hotels. These boast all the amenities. They are also located where there’s plenty to keep any non-snowmobilers occupied while you’re off sledding! 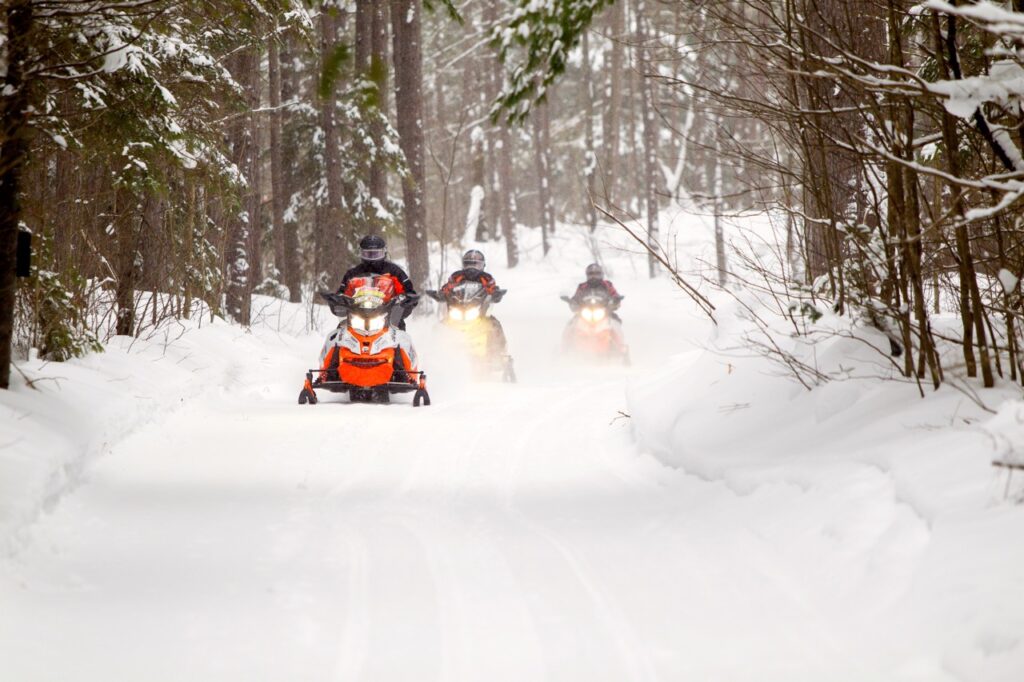 There’s exceptional snowmobiling near Algonquin Park on the north and northeast sides. All too often, the only exposure snowmobilers have to the Mattawa-North Bay area is passing through its southern fringe on the north leg of the RAP (Round Algonquin Park) Tour. Others pass through while trailering to Ontario snowmobile tour farther north on Highway 11.

But if you’re looking for a great weekend riding destination, try the Mattawa-North Bay area. It’s located in Northeastern Ontario. And ranks with the best, in part because it offers the Explorers Snow Tour.
The area’s located less than a three-hour trailer drive from both the Greater Toronto Area (GTA) and the Ottawa area. It’s bookended by the city of North Bay and Lake Nipissing on the west and the town of Mattawa and the Ottawa River to the east. The town of Bonfield is located centrally, while the whole area is tucked into the snowbelt just north of Algonquin Park.

The area is also bisected by the east-west positioned Mattawa River system. This includes Trout, Nosbonsing and Talon Lakes. All of these freeze solid in the winter and are crossed following staked snowmobile trails. There are several good hotel choices, but my favourite is the Quality Inn Airport. 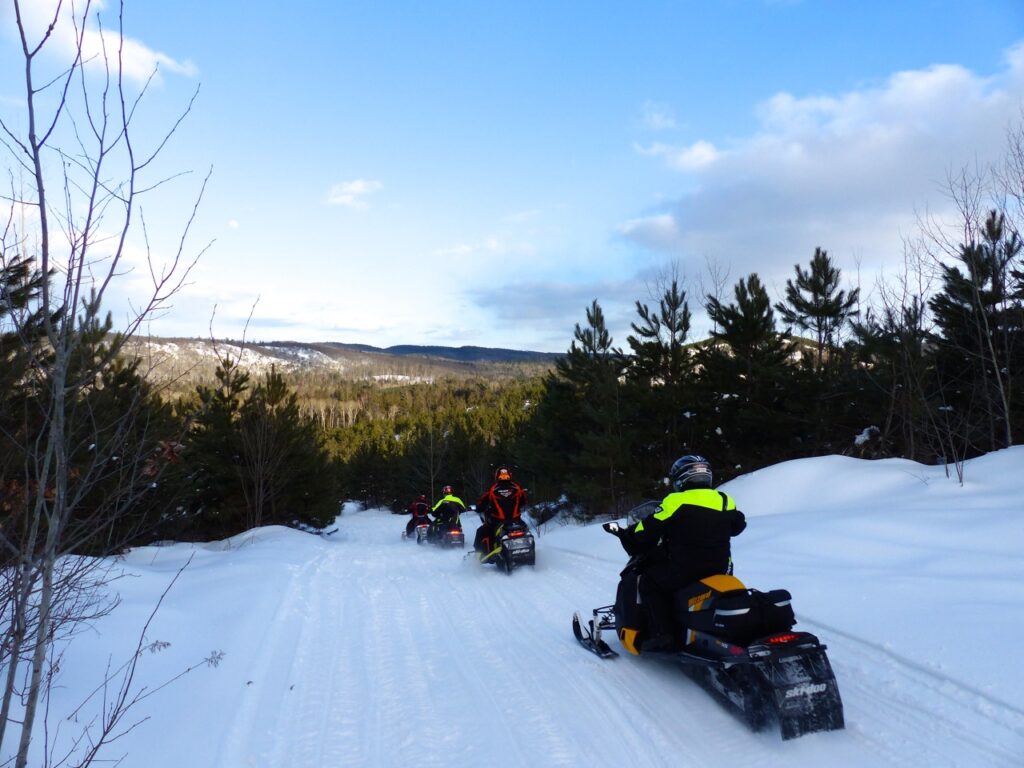 Snowmobiling near Algonquin Park also includes the area to the easy and south east. Here, some of Eastern Ontario’s most reliable snow conditions occur in what’s generally known as “The Ottawa Valley”. Bounded on the east by the Ottawa River, the region includes snowmobile-friendly communities. They include Barry’s Bay, Calabogie, Pembroke, Petawawa, Renfrew. And over 1,700 kilometres of groomed OFSC snowmobile trails ideal for an Ontario snowmobile tour.

For our weekend snow machine ride, we staged from the Best Western Renfrew. The Town of Renfrew is ideally located for long weekend getaway rides for several reasons.
One, riders living anywhere east of the Greater Toronto Area (GTA) can trailer there easily after work on Thursday night. Renfrew’s also within an hour of Ottawa. And just a two-hour drive north of the 401-corridor. Meanwhile, the drive from Toronto proper for this Ontario snowmobile tour is about four hours. 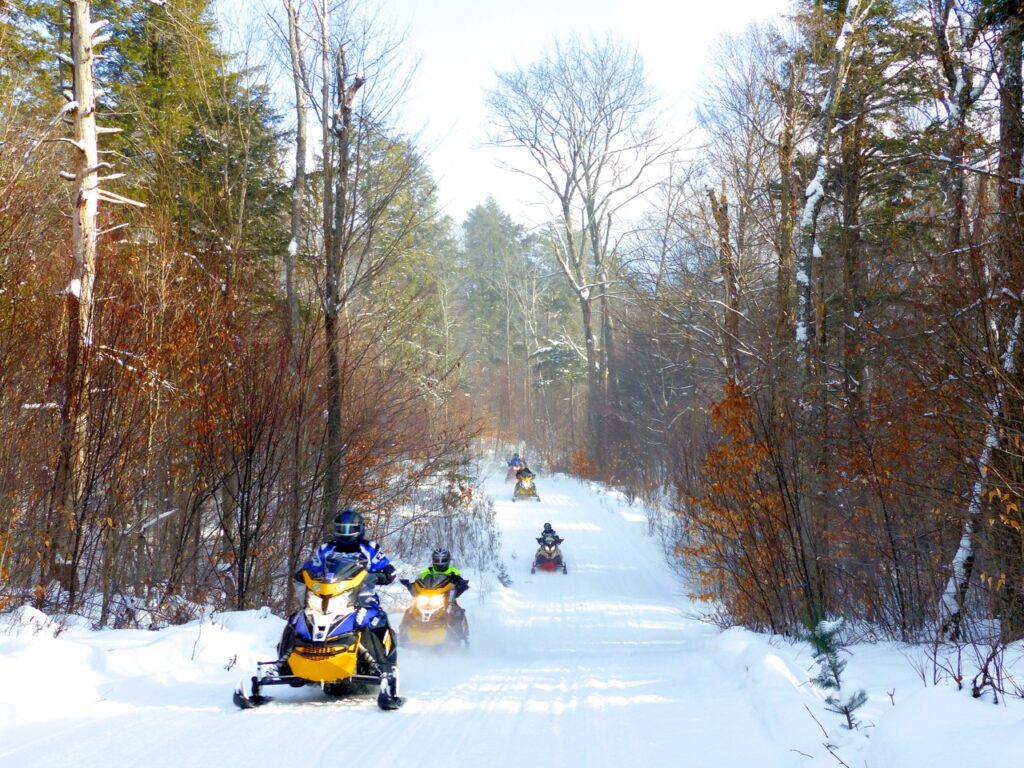 As part of Ontario’s popular “cottage country”, the Haliburton Highlands are located due south when snowmobiling near Algonquin Park. The area is sandwiched between Muskoka and the Ottawa Valley at the edge of the Canadian Shield.

Centred on the towns of Haliburton and Minden, these forested lake lands make for a memorable and scenic Ontario snowmobile tour. They are on some of the province’s longest established snowmobile trails.
Located on a club trail about halfway between these two towns, Pinestone Resort fits the bill for a reliable snow conditions destination not far from home. It offers a choice of winter fun options to please everyone. This premier establishment is just three hours north of the Greater Toronto Area (GTA).