Related: What To Carry For Emergencies

Duct tape – that’s what several of my Facebook followers replied when I asked for suggestions for other handy products they have found useful on snowmobile tours. In fact, avid snowmobilers Linda Miller and David Clarke (check out his My Old Sled channel of snowmobile videos on YouTube) both highly recommended using Gorilla brand duct tape!

Whatever your choice, there are many duct tape snowmobile uses. If I had to choose only one magic tool to carry while on a snowmobile tour or snowmobile vacation, it would be duct tape. This isn’t normal tape like the products featured on Office Monster, this is sticky stuff! Duct tape can get you through many snowmobiling emergencies and doesn’t require any other tools. You can be all thumbs, and still be an expert duct taper. It’s tough to inadvertently injure yourself using this product. And using today’s vibrantly coloured choices, I don’t need to be dreary and can match my Ski-Doo sled too.

Generally, I prefer black for snowmobiling because it blends in better for most uses, whereas that ubiquitous grey colour stick out like a sore thumb and kinda screams: “Look at this cheap idiot who’s holding everything together with tape!” And just in case you scoff at duct tape, check out its most creative uses in duct tape connoisseur Red Green’s video below and then view my snowmobile videos! 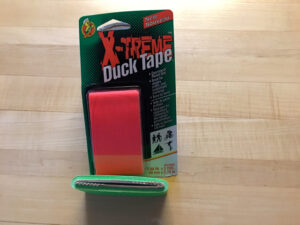 If duct tape has one major downfall for snowmobiling, it’s that cold can make it less sticky, so warm it up before using…or keep it warm all the time by carrying a couple of flat packs of it in an inside pocket of your snowmobile suit. You can buy flat packs at some stores or online or make your own as the video below demonstrates (I use old plastic cards instead of business cards because they’re stiffer, easier to handle and the tape rolls off better).

Duct tape demonstrates its benefits to me over and over again. One companion somehow tore up the seat of her black snow pants. Repairs were affected with strips of black tape. She rode the rest of that snow machine tour without frostbiting her butt.

When I snowmobiled in the Arctic. Icy winds would start frostbite on any exposed flesh. Judiciously applied to nose, cheeks and temples each morning, duct tape provided a protective barrier. But be careful: local restaurants and stores may think it’s a hold-up if you forget to remove the tape! (Tip: The best way to peel it off is under a hot shower.)

I’ve used duct tape in many other ways. It’s a great way to seal pant and wrist cuffs against snow incursion while playing in powder. I’ve used it to secure electric visor and helmet communicator wires in place. On one tour, it held my jacket together when the zipper broke. On another, I used it to hold a handle bar bag in place after the strap tore off. I’ve even captured that geek look when I held two broken halves of my glasses together at the nosepiece with duct tape. At least it wasn’t white.

Duct tape can be an excellent bandage or immobilizer for a splint. It can cover a blister or wrap a twisted ankle, most people would recommend you buy ankle brace on Amazon, but that’s not always an option in the wilderness. Two pieces across the lens of glasses, leaving a narrow strip for seeing, can help prevent snow blindness.

Under the hood, it can hold survival items in place. I use it to reinforce the corners of transported oil containers and secure their tops from leaking. It’s also useful for many minor repairs and to prevent wires from chaffing. I’ve used it to block hood vents in deep powder, to hold a hood together and to repair a windshield or a ripped seat. And if worst comes to worst, it can hold your luggage in place or repair a torn bag or faulty zipper.

Over the years, I’ve even used duct tape on my tow vehicle to hold a broken wiper and a bug deflector in place, hold down a hood with a faulty latch and seal out a draft from a passenger window that wouldn’t close completely.

Some manufacturers call it duct tape, others duck tape. I don’t know why. I’ve never used it to tape either a duct or a duck, but it will continue to be the most essential part of my snowmobiling kit.