What Happens When Too Much Snow Falls Too Fast… 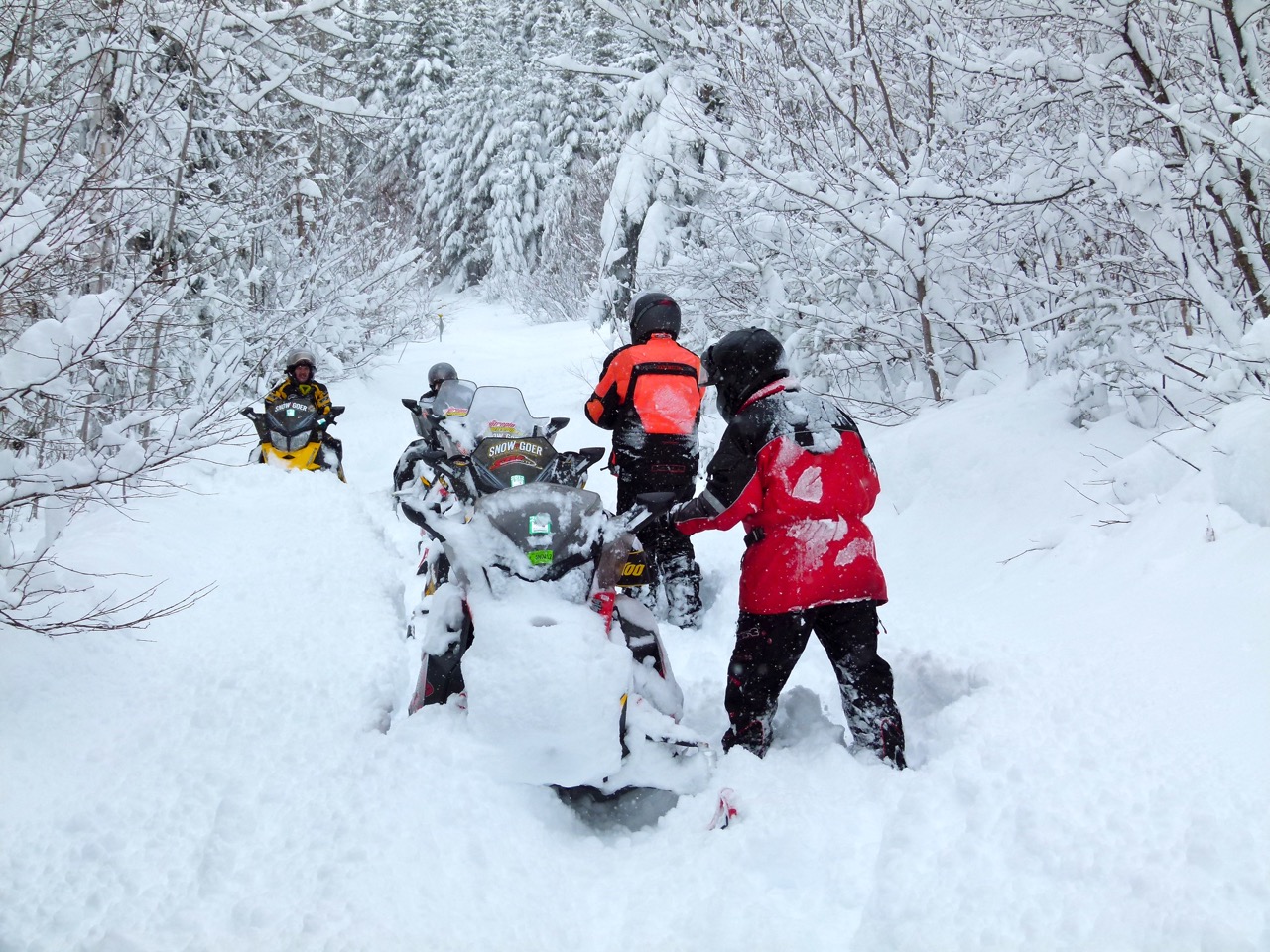 Related: How To Stay On Trail In A Winter Storm

When a weather prediction calls for a winter storm, snowmobilers celebrate. But getting caught in a major winter storm while on a multi-day tour can be challenging. So can taking photos when the weather sucks, so I’m short of shots for some of these adventures!

My first one was a real doozy. We were on the last leg of a saddlebag tour north of Montreal in the Laurentians, when we heard weather warnings. Not a problem, I naively figured. After all, we were dressed for winter weather and only a short ride remained to our trailers.

But then I looked outside from our motel room next morning. The entire world had transformed into frozen sculptures. Slip-sliding our way to the sleds, we were shocked to find them encased in up to 4 centimetres of ice!

The difficulty of breaking that hard coating off was our first clue about what else lay ahead. Fortunately, the winter storm was over, but the trails were skating rinks. Without studs and ice scratchers, we couldn’t have made it to the trucks. Even so, overheating was a problem. We had to take it easy and stop frequently to pack our tracks with snow laboriously dug out from the side of the trail. Also had to cut several tree limbs blocking the way. No other traffic though! 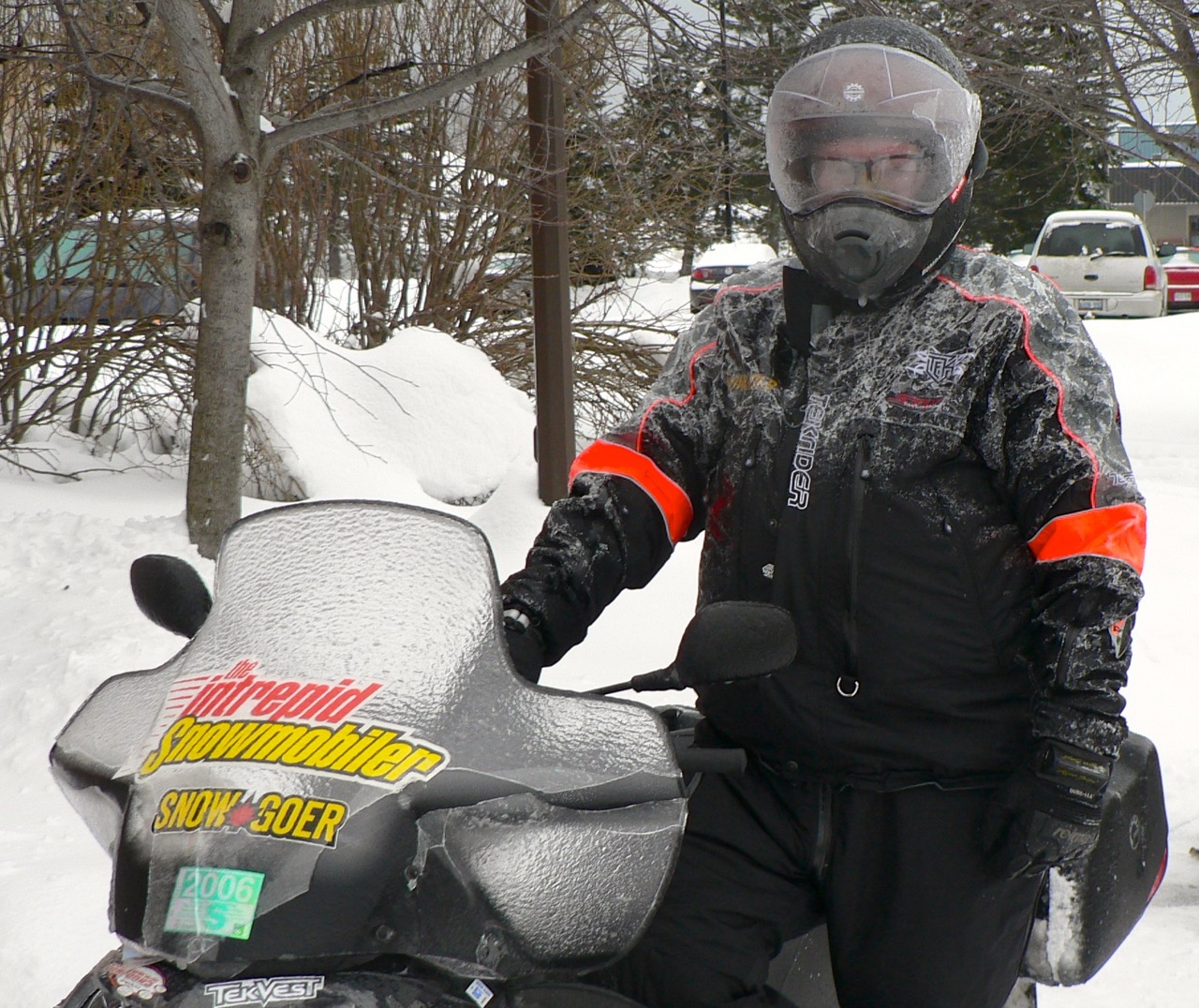 Nothing like freezing rain to make a winter storm more interesting! Photo © by Craig Nicholson.

It wasn’t until trailering home to Central Ontario that we realized the extent of the disruption. Road eerily empty of traffic. Highway ramps closed. Hydro towers entombed in ice, and some collapsed under the extra weight. No lights on anywhere. And all services closed, including gas stations without electricity to run the pumps.

The massive power outage extended across much of Quebec and into Ontario. Going was treacherous. We refuelled from our gas caddies and used a syphon to drain the sled tanks. We ran on fumes into Kingston, where we spotted an open station operating by generator.

We experienced both a white knuckle trail ride and drive home in the 24 hours. And thanked our lucky stars that we’d survived the Great Ice Storm that blacked out much of eastern Canada and the U.S. for many days!

When All Else Fails, Take The Highway

My first trail ride interrupted by too much snow was near Cochrane, Ontario. Snow has been falling steadily since late the previous day and intensified as we headed west toward Smooth Rock Falls on TOP Trail A. We broke trail through at least a foot and half of the white stuff, deeper where it had drifted in open areas.

By the time we reached the warm up shelter at intersection with L105, we were pooped. With no end in sight, we turned south on L105 and worked our way to Highway 11. Maybe closed because of the winter storm, that thoroughfare was an unmarked white ribbon. So we rode it all the way back to Cochrane without seeing any traffic and settled back into our motel to wait out the storm. 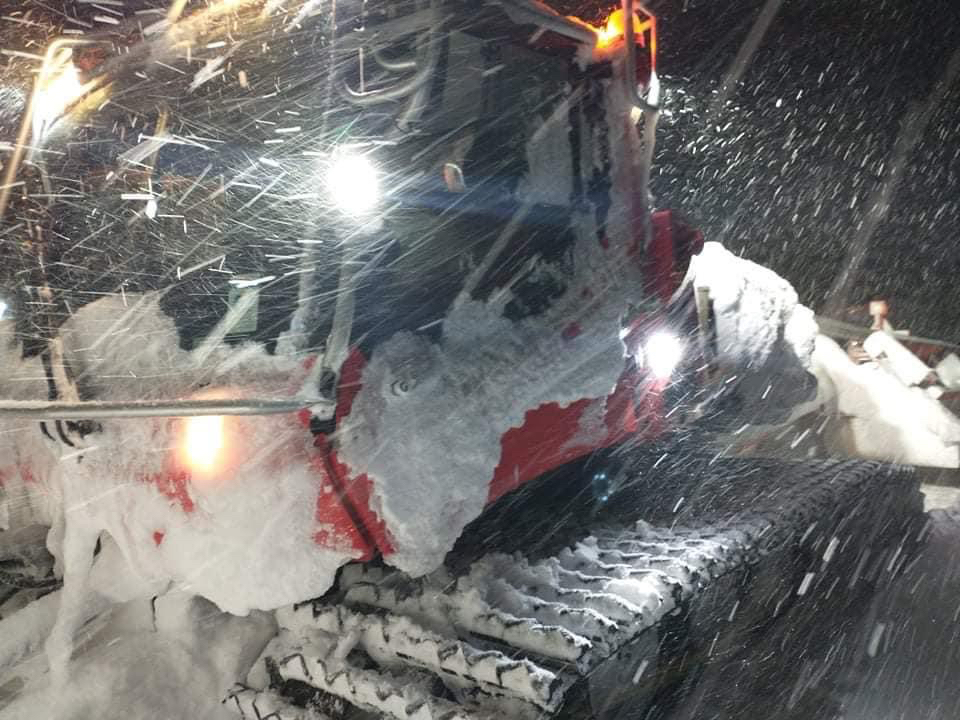 Even groomers have a tough go breaking trail after a winter storm. Photo by Jean-Guy Hallé.

A similar Highway 11 experience awaited me when we did the 965-kilometre NWOSTA Wilderness Loop in OFSC District 17. Lots of snow everywhere. We’d completed about 2/3’s of the loop, when it snowed heavily overnight, just before we embarked on the final leg. By the time we got started, snow had mostly obliterated TOP Trail A113A. That slowed our pace as we tried to follow the now hidden groomed surface. But a sled or two frequently got buried when a ski dropped off into the bottomless depths beside the trail. Gut wrenching extraction work!

At Mine Centre on Highway 11, our weary crew found the gas station & restaurant closed. Fortunately, a local spotted our predicament. He called the owner to open so we could eat, warm up and get much needed gas. Next thing we knew, an OPP cruiser pulled up in front, and the officer said: “Follow me!” And so with the flashing lights of a police escort leading the way, I had my second winter storm ride back to a staging hotel on Highway 11! 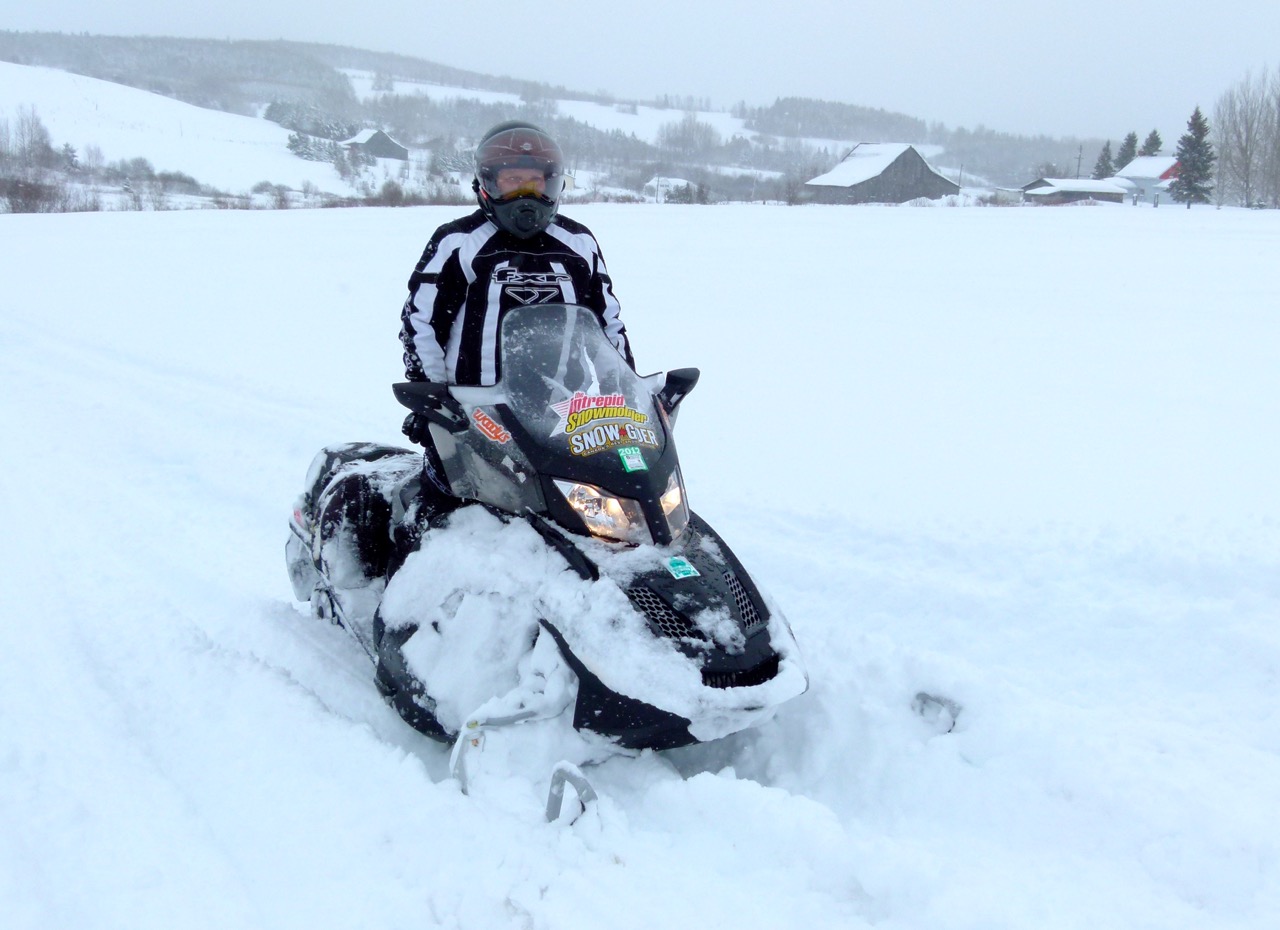 Finding the trail and pushing snow all the way. Photo © by Craig Nicholson.

Heavy snow certainly can make the going tough in a winter storm. But so can not being able to see your hand in front of your face. Once in Saskatchewan, we suddenly ran into a low hanging ice fog and totally lost the trail ahead.

Strangely when glancing up, I glimpsed light. We quickly discovered that standing on our sled seats put our heads above the fog and we could see fine. Hard to steer that way, but we were able to find our direction by checking periodically until we emerged from that icy shroud.

I had a similar experience high in the Revelstoke mountains on a bright, sunny day. We were exploring the peaks, when without warning, a snow blizzard enveloped us. It immediately blocked all our sight lines in every direction. Scary stuff when you’ve got to be cautious about riding off a cliff!

A local riding with us advised everyone to just stay put and wait for it to blow over. It took one of the longest half hours of my life to dissipate. Boy, was I happy to see the sun again! 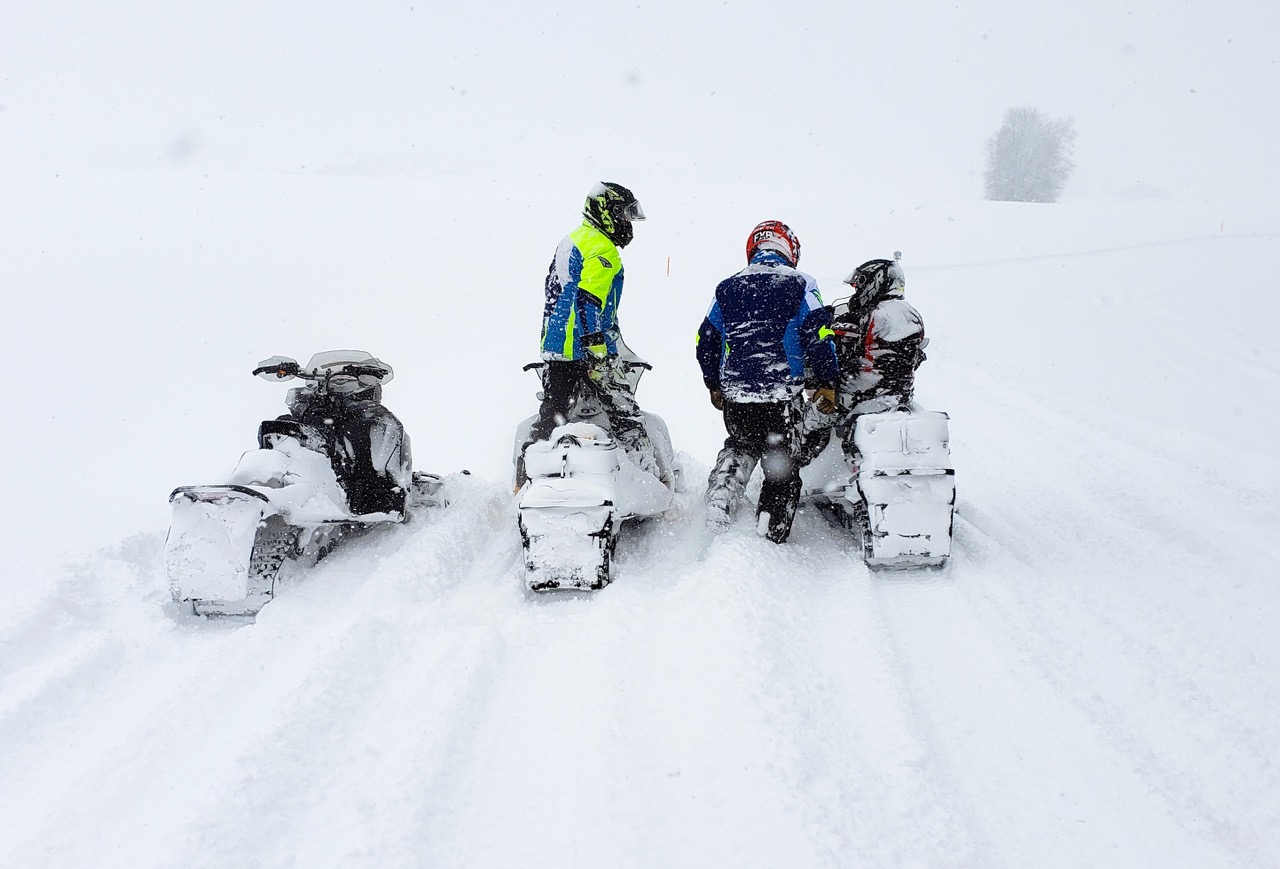 Checking the GPS in a Grey Bruce whiteout. Photo © by Craig Nicholson.

But you don’t have to go far away to lose visibility. The Grey Bruce area of OFSC District 9 is notorious for sudden lake effect squalls. Many happen in localized pockets like the wall of blowing snow that hit our group on the Saugeen River Tour. Visibility immediately went to near zero for about half the day. Windswept snow kept building up on our visors. But when I cracked it open, hoping to see better, my face was quickly packed with snow!

It certainly was a local squall. Other riders we met later in the day hadn’t encountered any whiteout at all. Ocurrences like this are one good reason area clubs do such a good job staking their fields. We wouldn’t have found our way without them!

My two most challenging winter storm adventures took place on Canada’s east coast. One in New Brunswick. The other in Quebec. 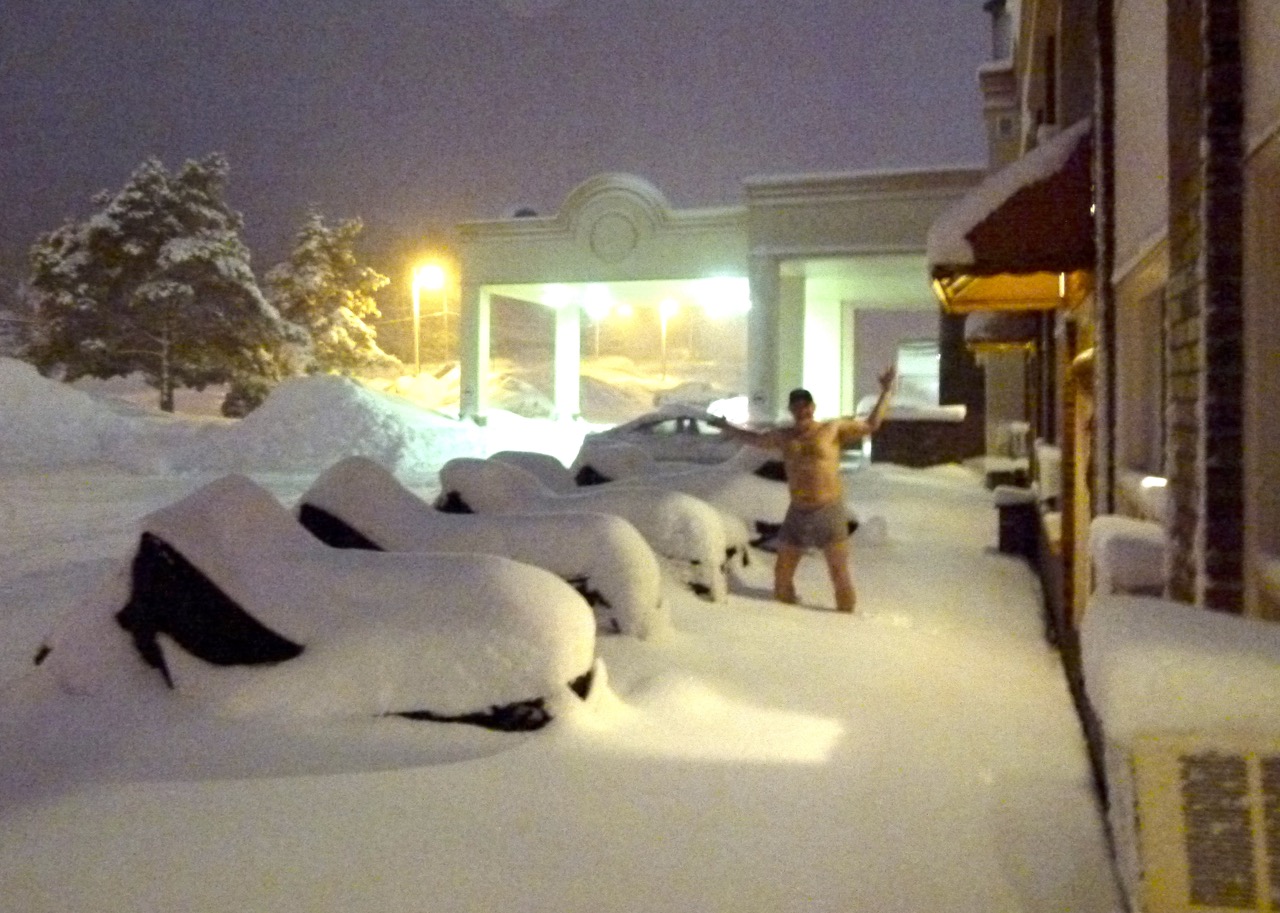 Waking up to way too much fresh snow in New Brunswick. Photo © by Craig Nicholson.

We had trailered to Edmundston, New Brunswick to ride a circle loop around the province. As we arrived, a winter storm started. By next morning, about a foot blanketed the ground. Undaunted, we headed south on NB Trail 12 for the 272-kilometre ride to Fredericton. As soon as we encountered the buried trail and deep drifts, I knew reaching our destination was a pipe dream.

We had most difficulty when we’d emerge from a forested section of trail into a heavily drifted open area. Trying to spot where the trail went without slowing down or falling off the groomed surface underneath was a real crapshoot. Continually digging out one stuck sled after another took its toll.

Darkness was setting in when we finally lost the trail completely just outside Grands Falls. The last straw after 8 hours of struggle and 112 very hard fought kilometers. Fortunately, some local sledders at a nearby farmhouse spotted our searching headlights. Hopping on their sleds, they led us to a motel for the night near where we’d planned to stop for lunch! But club groomers were out overnight, so the rest of the tour was a breeze. 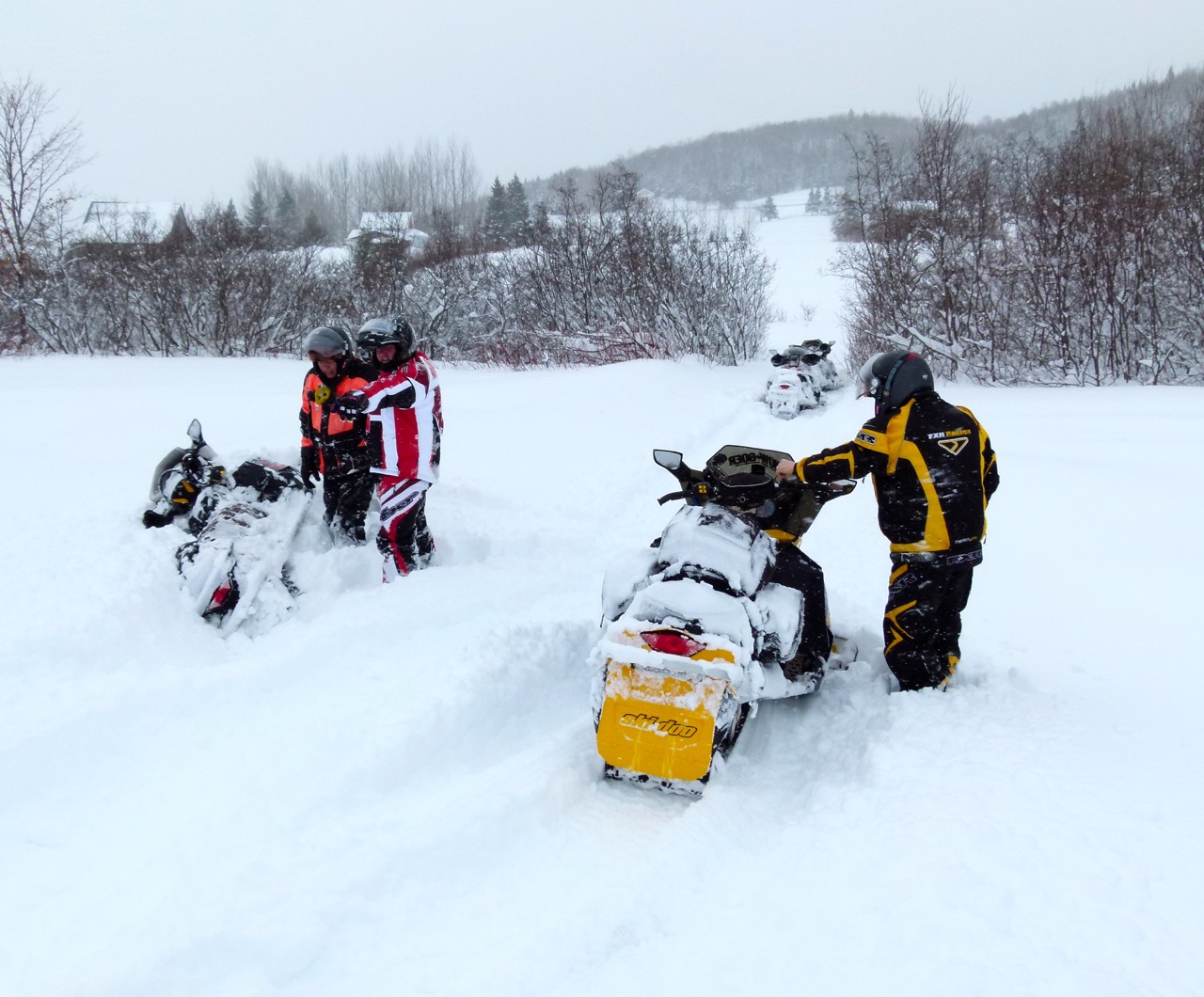 Riding Quebec’s Gaspésie Peninsula is a must-do ride for every snowmobiler. But the region also has a well-deserved reputation as a fierce winter storm centre. On one tour, I led a group of first-time visitors along Trans Quebec Trail 5 on Gaspésie’s panoramic north coast to see its incredible sights. Wouldn’t you know it? A winter storm set in for the day. Although we could see the trail ahead okay, blizzardy conditions obscured all of those iconic views. Maybe next time!

Hard to sightsee the scenery when visibility’s like this! Photo © by Craig Nicholson.

On another Gaspésie tour, a winter storm set in for almost four days. We barely made it to our lodgings at Percé, planning to continue our ride the next day. No dice – we checked out of our lodgings, but found the snow had totally obliterated the trail entrance. Despite an hour of trying to ride the trail, all we accomplished was several sled burials. The snow was so deep we almost needed a backhoe to get out. But we did set a new world record for the shortest time between checking out and back into the same motel again!

The entire town shut down for the continuing winter storm. So we played snow tourists by wandering the main street in our full snowmobile gear, with helmets on. Next morning, the storm had abated. But it took an extra hour to get going because snow had entombed all of the sleds. The white stuff had also packed every inch around the suspension. Even under the hoods was full of it! Groomers had broken the trail overnight, so the way was passable next day. 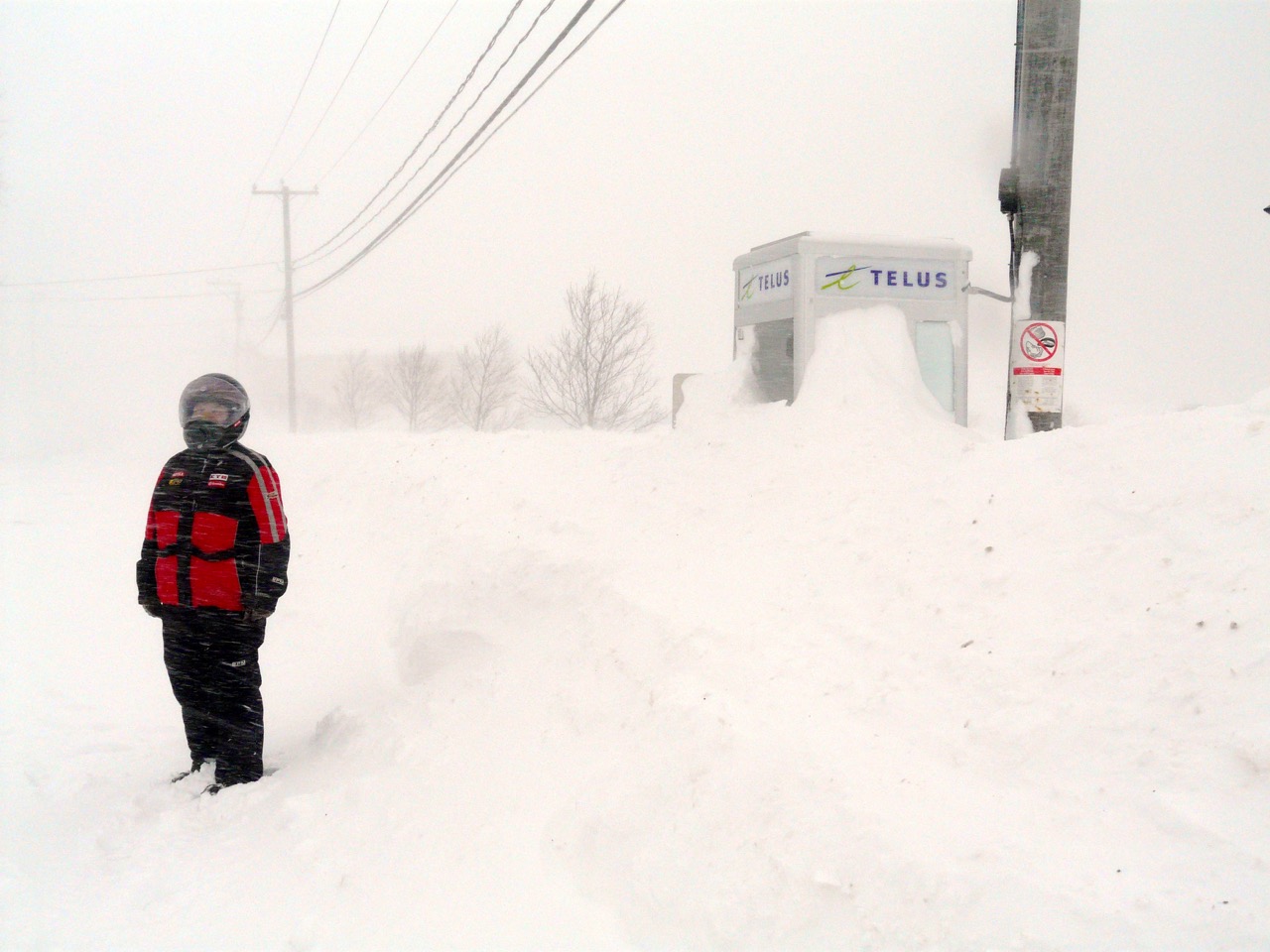 Doing the tourist thing in Percé – check out the phone booth! Photo © by Craig Nicholson.

Even The Best Laid Plans

But our ordeal wasn’t over yet. A day later, we snowmobiled through the centre of the peninsula on Regional Trail 597 to stay overnight in Murdochville. Then we hit that remote east-west local trail that connects cross country to Regional Trail 595. About an hour in, one sled blew a piston and had to be towed.

If I’d known then what would happen next, we would have gone back to Murdochville. But the trail was groomed and the going easy. So we opted to tow in the direction we’d parked our trailers at Rivière-du-Loup.

As luck would have it, an unexpected winter storm blew in. The farther we towed, the harder the going became with more fresh snow on the trail. During 200 klicks of pulling that dead machine, the tow sled blew 5 belts. Fortunately, everyone rode Ski-Doo snowmobiles and had spare belts that fit.

But by the time we got to Trans Quebec 5, no one had spares left. So we finally dropped the broken sled, chained to the porch of a liquor store in the first village we came to. Then as the winter storm raged throughout the night, we hired a truck and trailer in Matane to pick it up. 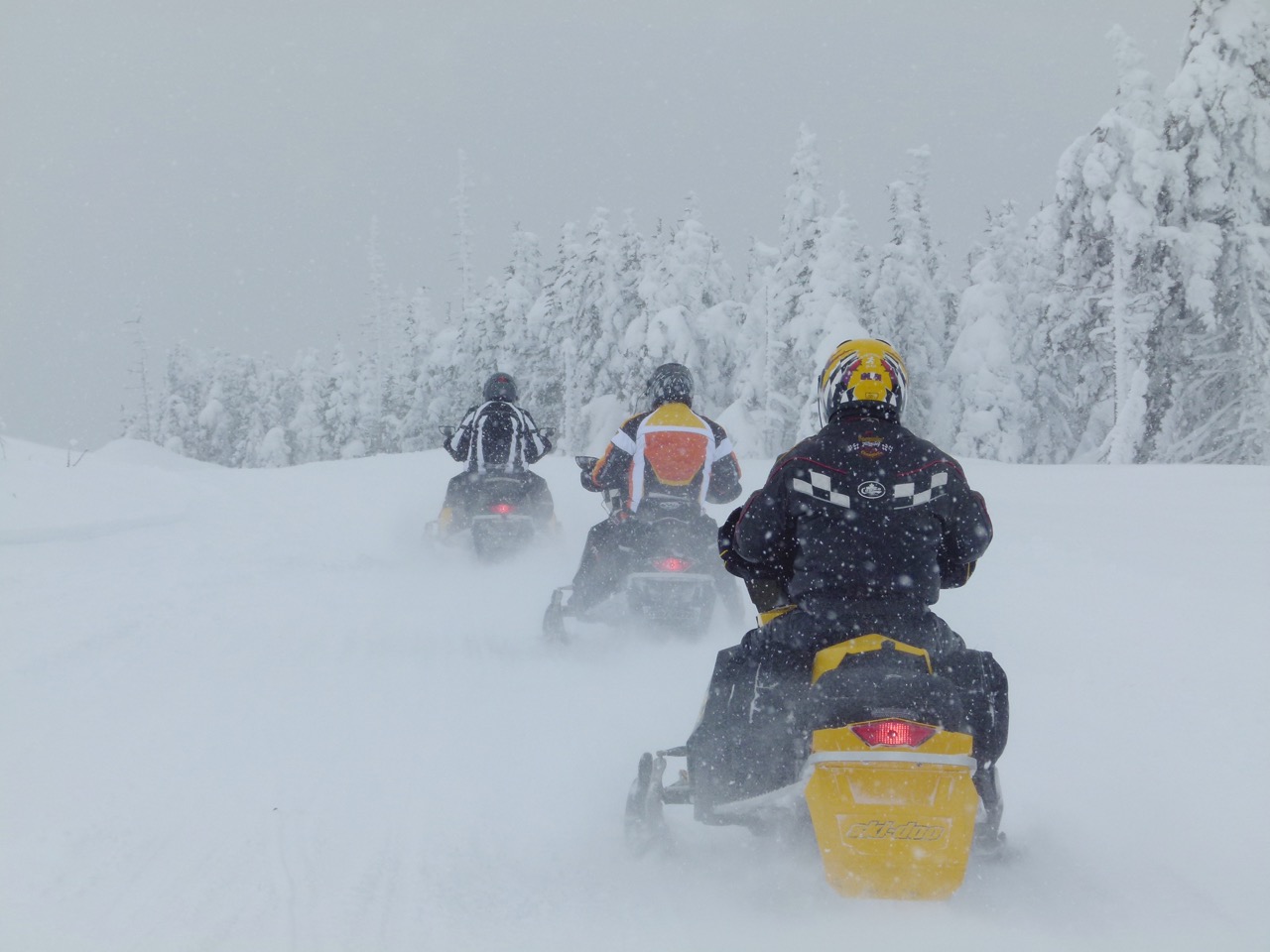 Next morning, our Plan B was for our own truck owners to sled east to Rivière-du-Loup and come back with their trailers. That option lasted right up to the minute we were about to get started on our trail sleds. That’s when we encountered a couple of guys on long track mountain sleds. They were just returning to our hotel after failing to break trail on their own way east. So much for riding, and on to Plan C. Our truck drivers climbed in a rental car and drove to Rivière-du-Loup. Defeated by yet another winter storm! 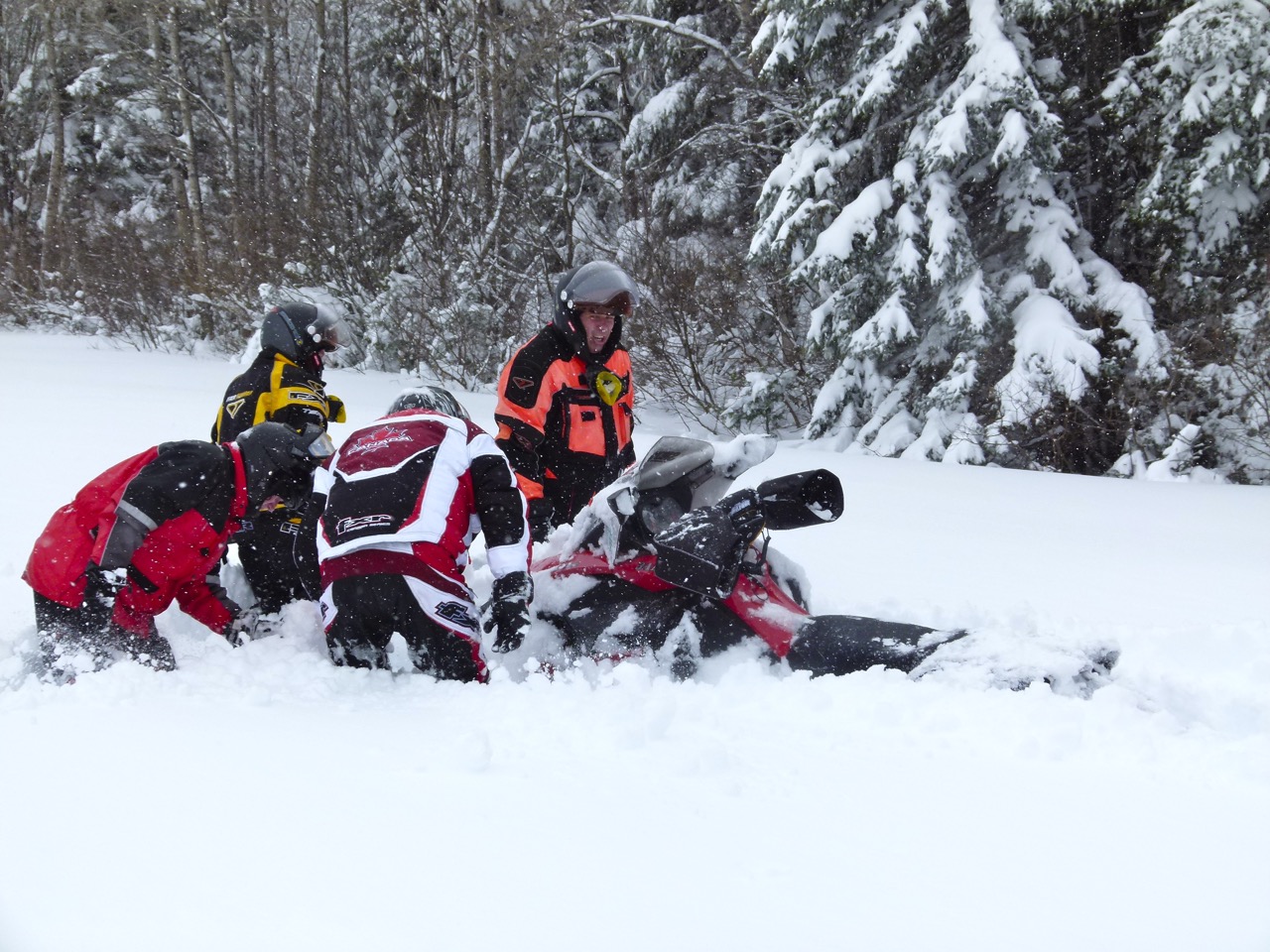 Different kind of trail ride after a winter storm. Photo © by Craig Nicholson.

After all of these winter snow storm fiascos, you’d think I would have learned a thing or two. Other than that I may be the jinx you don’t want to ride with! Here are a few tips…

If all else fails, rely on great companions and your love of adventure to help see you through!