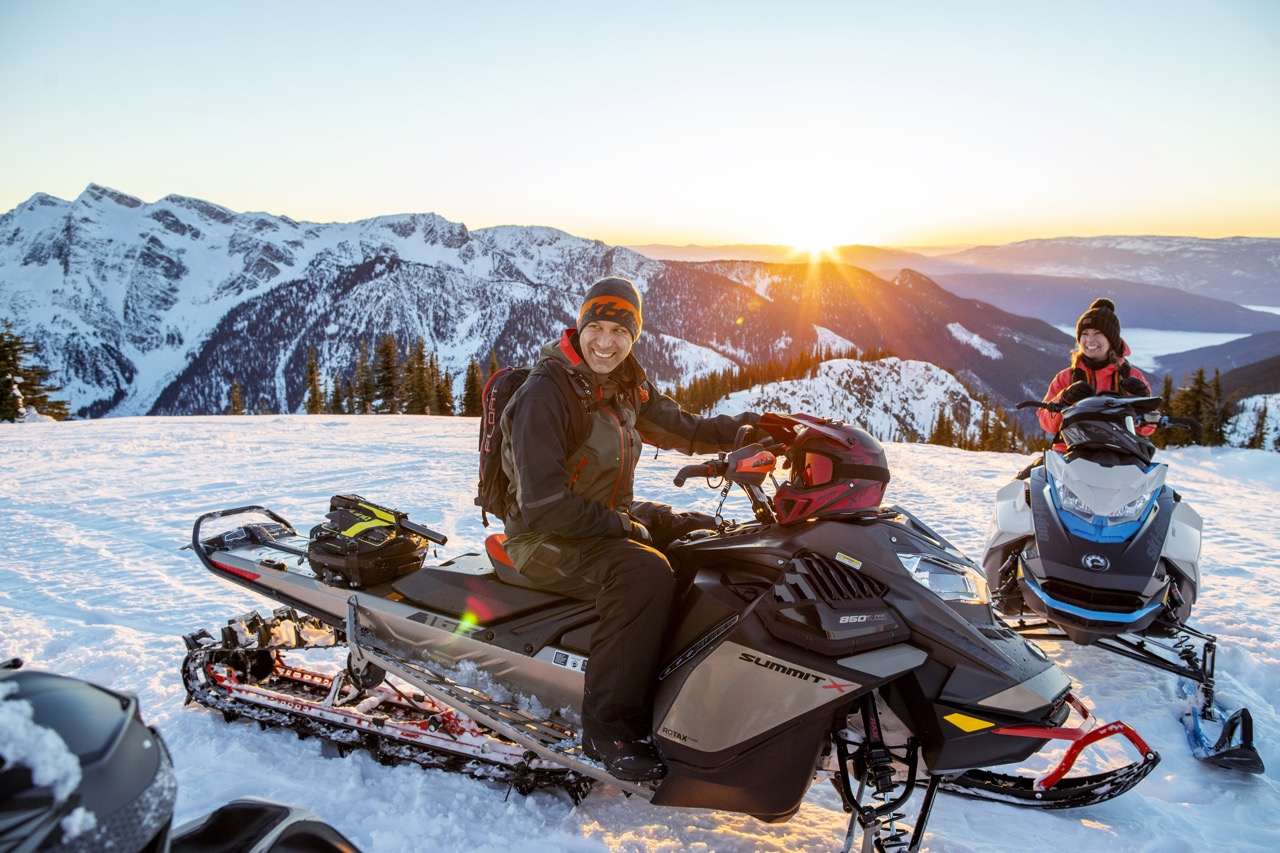 What is it with deep snow sleds anyways? Most snowmobile dealers in trail riding regions report a significant increase in riders buying longer track machines. Not long ago, the standard track length for trail sleds was 121”, and then that went to 137”, like my Ski-Doo Renegade Enduro.

Now, many dealers note more sales of sleds with tracks of 146” and even 154’s or more. These tracks that long only come on deep snow sleds – mountain and the more extreme crossover models. With these deep snow sleds, buyers are stuck with a host of often unmanageable trail riding issues. All too often they go unspoken on the sales floor. Or when they do get explained, powder wanna-be’s often don’t want to hear it. 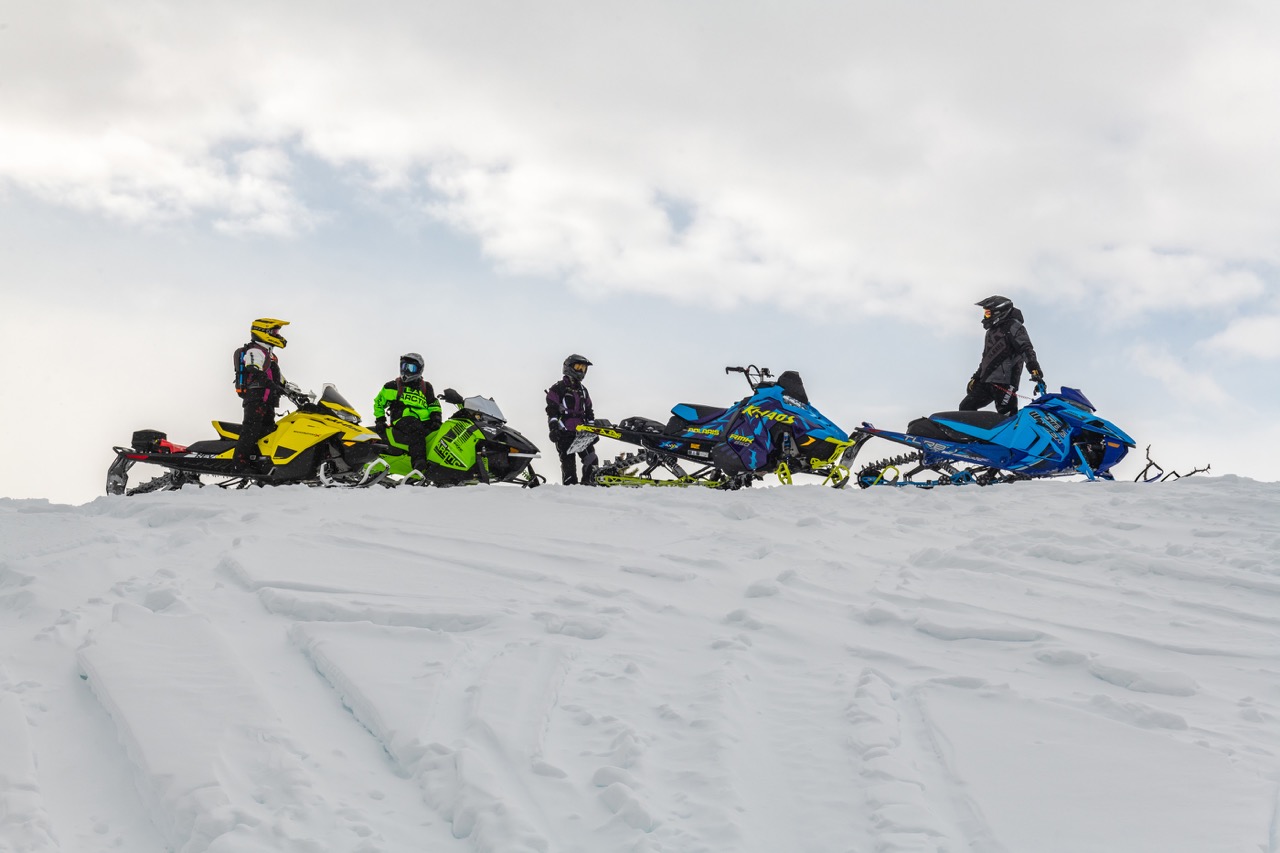 Over the years, I’ve snowmobiled many first-rate mountain riding destinations. I’ve visited Revelstoke, Kelowna, Valemount, Crowsnest Pass, and many locations in between. Each time, I rode a current mountain sled. Those incredible snow machines took me to play areas and vistas that my trail sled could never have reached. I was always amazed at the capability differences between these deep snow long trackers and my own trail machine.

Interestingly, every one of my high country adventures started with a groomed trail ride specifically routed from a staging area up to the deep stuff. Some of these access trail were just a few kilometres; others were longer. Regardless of their distance, I couldn’t wait to get off the groomed trail. Frankly, those mountain sleds were piss-poor and even scary on a hard-packed surface.

Deep snow sleds also shine for backcountry riding, like that found in Mont Valin or Gaspésie’s Chic-Chocs. The same awesome capabilities that conquer the slopes make powder riding anywhere a breeze. The problem is that anywhere. Just like with mountain and trail riding, it’s important to find designated areas where backcountry riding is allowed. And to access them while avoiding private land or damaging trails specifically designed for trail riding, not powder access.

Which brings me to the topic of this column: deep snow sleds have no place on groomed trails. Even some of today’s so-called crossover sleds are better configured for powder playing than trail riding. So it’s time to get real…

Trespass Is Closing Our Trails 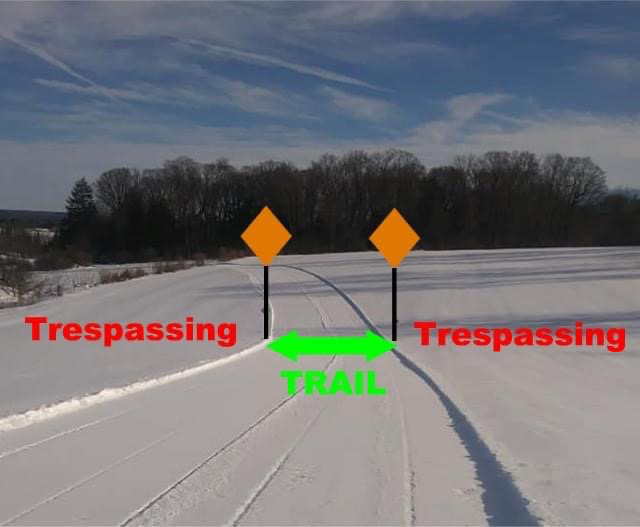 Every trail riding destination in North America suffers from unnecessary and preventable trail closures caused by snowmobilers not staying on designated trails across private property. Riding off of the marked trail for any reason is trespassing. This disrespectful behaviour in increasing despite the best efforts of snowmobile clubs to place more signs, stakes, fencing and other barriers or warnings to stay on the trail. No wonder more landowners are simply fed up and withdrawing permission for a snowmobile trail on their property. The problem is especially prevalent in agricultural areas where off trail trespass can result in considerable crop damage.

Among the trespassers are snowmobilers who buy deep snow sleds in regions where trail riding is the primary type of snowmobiling. It boggles my mind why anyone who resides in “flatland” areas and doesn’t have other access to designated mountain or backcountry play areas would make that purchase. 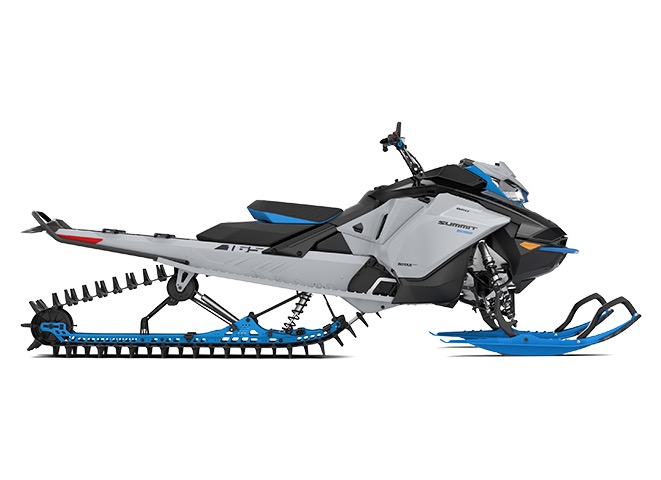 Here are many of the reasons why deep snow machines make third-rate trails sleds. And why you’ll never be able to set them up properly for trail riding!

Deep powder sleds have high chassis, longer skid configuration and shorter snow flaps. So they tend to overheat more quickly and more often on hard-pack, icy or low snow trail surfaces. When that happens, riding into deep snow is the unfortunate choice for cooling down soaring engine temperature. Even when that means leaving the trail and/or trespassing on private property. What’s more, a set of scratchers won’t work as effectively or quickly on mountain sleds as they do for cooling on trail sleds.

But their engine isn’t all that overheats with deep snow sleds on groomed trails. Their longer tracks also have a greater tendency to heat up on hard-pack trails and so do the deeper lugs. Designed of softer material to cup powdery snow, they start to break off when hot. Meanwhile, track delaminating caused by overheating can shorten a track’s lifespan or even result in a broken track. Plus, every ½” that the skid is above the trail surface dramatically increases slider overheating that causes sticking, and wear requiring more frequent replacement. Taller lug tracks on trails will melt sliders WAY faster than a lower lug track. This overheating isn’t an issue in deep snow, but wandering off the trail or riding farm fields isn’t the place to find it.

Deep snow sleds are purpose-built to optimize powder snow and steep terrain performance, including climbing chutes, carving up bowls or playing through the trees. The very characteristics that make these sleds excellent for backcountry and mountain riding also make them unpredictable and inadequate trail performers. Besides, their exceptionally long tracks and deep lugs chew up groomed surfaces and corners. Following a deep snow sled on the trail invites a hard smack in the visor by chunks of surface fired from behind like missiles. What’s more, longer tracks are noisier at trail speeds and their arm-aching vibrations on hard-pack can be very uncomfortable and unsettling.

For this article, I chatted with several of the most experienced trail riders I know, some with skills honed as test riders, and at oval tracks and enduro challenges. Each has tried to tame a deep snow long tracker for trail use, and all agree that their attempts were at best a chore and at worst, downright dangerous.

After tweaking a deep snow sled for trail riding as much as possible, John Sharrard of Accelerated Technologies commented: “On the trail, that mountain sled wasn’t for the faint of heart. I constantly had to use all my riding skills and be on it every minute trying to get it to do what I wanted, but was never confident that it wouldn’t try to pitch me off unexpectedly.”

Other riders who tried a mountain sled on the trails cited more reasons it wasn’t very comfortable for long days on the trail. They included cold riding because of the high-mounted riser handlebars and lack of wind protection; hard to pull starting; and steering difficulties caused by much higher handlebars. Plus, many reported sore butts from smaller, harder seats, with Michel Garneau commenting that “The seat wasn’t good for much else but a place to set your lunch”. Some also noted switches and gauges mounted inconveniently for trail riding and idiot lights that gave insufficient overheat warning. And good luck studding a 2”+ track! So hitting an icy patch (a common occurrence on groomed trails) either can result in loss of control with track spinning, sliding back or sideways, or worse yet rolling over. 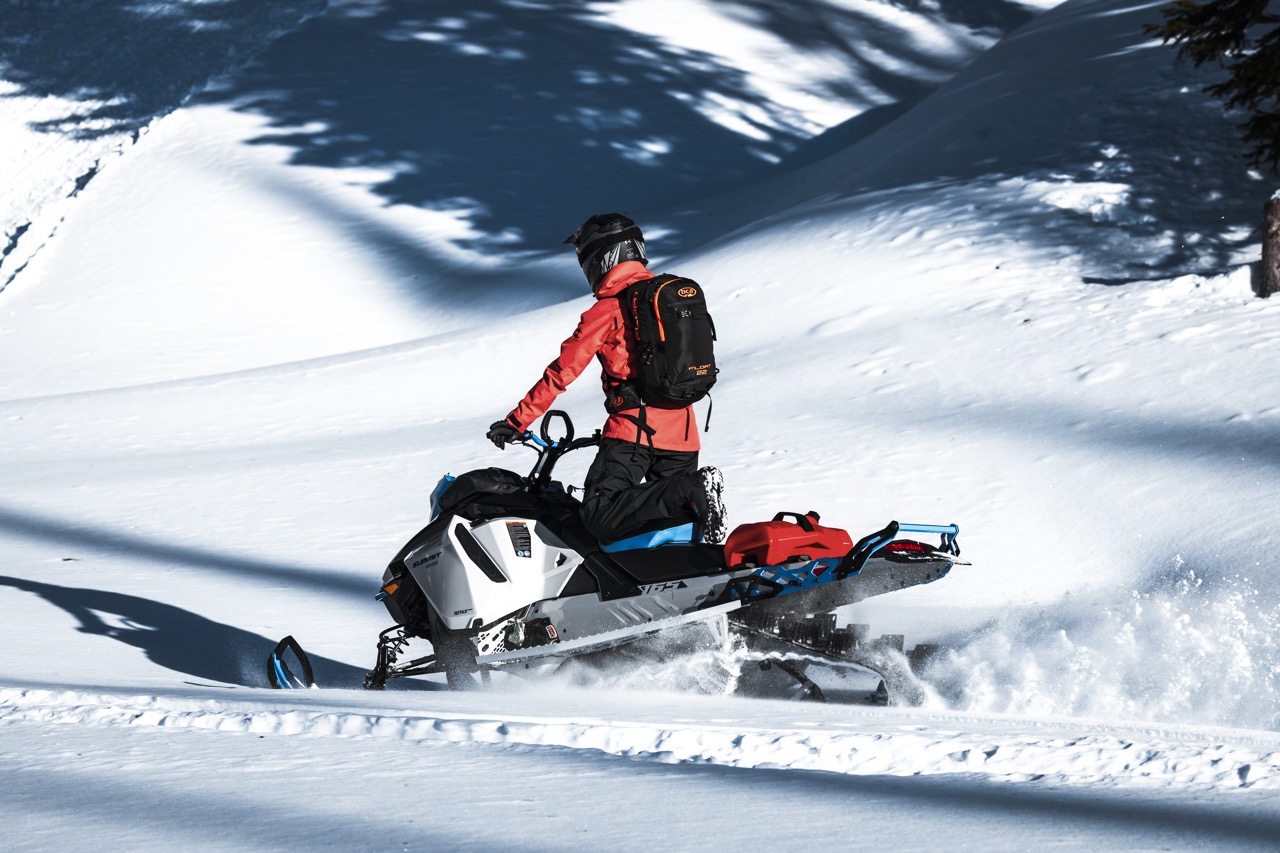 Many of these riding challenges arise from the built-in chassis dynamics of deep snow long trackers, which are very different from their trail counterparts. A higher centre of gravity and narrower stance may be perfect for the powder, but promote excessive instability on groomed trails. For example, compare the ski stance of a typical trail sled at 42” to some mountain sleds at 34”.

These attributes make for tippy, unnerving trail riding, with unaccustomed inside ski lift, and nowhere near the cornering ski grip of a purpose-built trail sled. As one rider noted, “You can’t steer with skis that aren’t touching the trail.” Even when deep snow sled skis stay planted through a corner, there’s often way too much track length behind the rider pushing forward like a freight train. That can mean the skis turn faster than the track can follow – a good recipe for severe understeer or an epic barrel roll.

Deep snow machines also have uncoupled rear suspensions with a very strong centre shock that don’t handle rough trail conditions well, because that’s not what they are made to do. Trail sleds have coupled suspensions for excellent weight transfer and progressively reaction to trail irregularities as front and rear shocks work in synch to keep the skis firmly planted on the trail. Simply put, coupled suspensions provide much better stability, control, adjustability and comfort on the trail.

With gas prices way up, perhaps the best reason to avoid trail riding a deep snow long tracker is poor fuel economy. Compared to trail sleds, most are geared low and differently clutched for lots of torque at low speeds through the powder, which greatly reduces their top speed on trails. It also takes way more horsepower to spin a 2.5” track than it does to spin a 1.25” track. All of which means deep snow sleds become serious gas guzzlers when pushed to trail speeds. 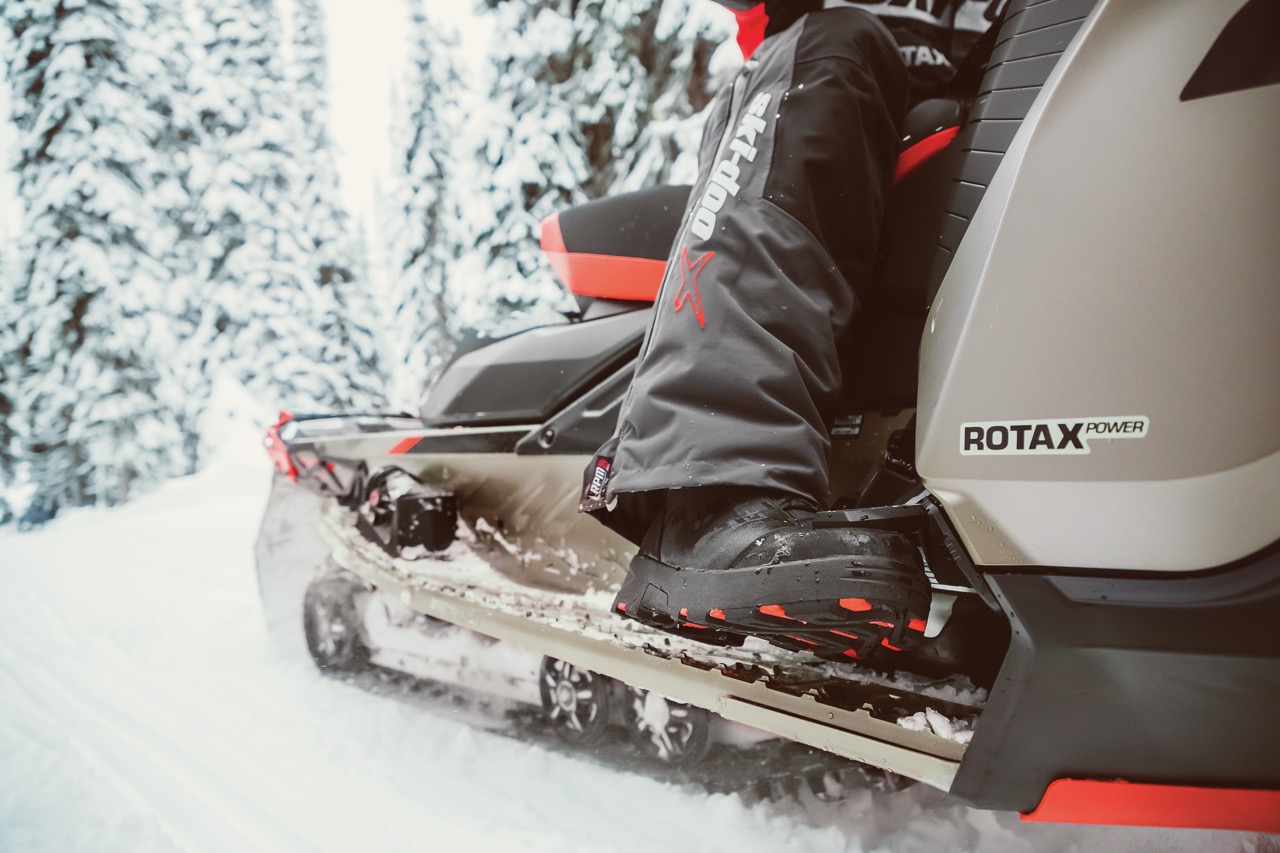 Sales staff at snowmobile dealerships would be doing their customers and local snowmobile clubs a big service by pointing out the trail riding deficiencies of deep powder sleds. But ultimately, it’s up to each individual snowmobiler to buy a sled appropriate for their primary use in trail riding areas.

So why not save yourself a bunch of trail riding headaches while also avoiding contributing to damaged and closed trails? Just get a sled purpose-built for riding groomed trails. Leave the deep powder sleds for their intended use where they shine – in the backcountry and the mountains.

For their expert contribution to this article, thanks to John Sharrard of Accelerated Technologies, Michel Garneau of the FCMQ, ex-racer and enduro rider Craig Irwin, and avid trail rider Daniel Cheriyan.