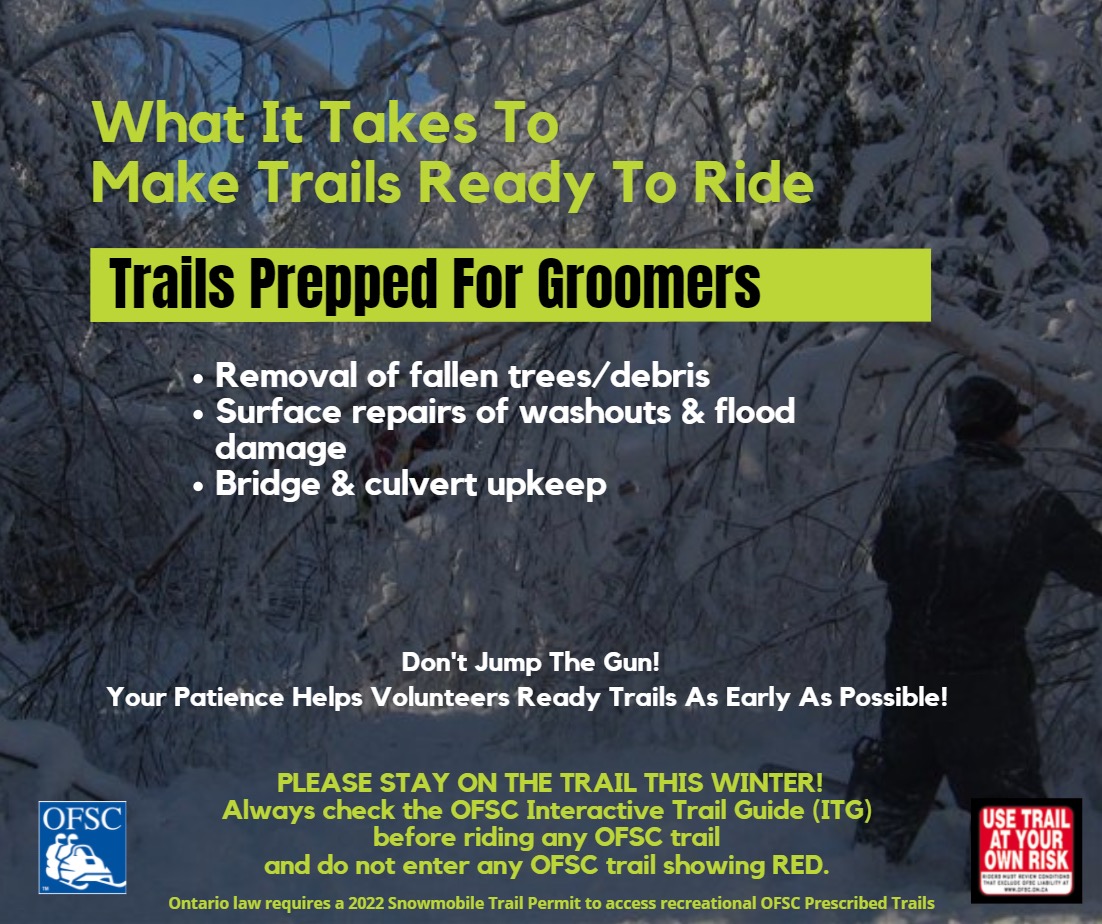 Suckered in again by an early snow. When are we ever gonna learn? I’m as eager to hit the trails and get riding as everyone else is. But it’s the same old, same old at the beginning of every season. We get an early teaser snowfall that makes it look like a winter wonderland. And my heart starts pounding, but wait…

Next thing you know, we start seeing social media posts bragging about first rips on early snow. Or fresh tracks suddenly appear on unopened trails, through closed fields or across even people’s lawns. And there’s mostly snirt left behind, where machines cut through that early snow and chop up the soft earth below. Not only hard on the snowmobile, but likely risky for the rider and an unnecessary piss-off for landowners, too.

Heck, we even see posts where a few groomers starting to pack this stuff. But flattening more dirt and mud than anything else. Why waste all that volunteer time and effort or risk damaging valuable equipment? Or spend limited funds on early snow that historical weather data shows will likely to melt anyways? Money that could be saved now to do more grooming when winter actually arrives to stay.

In a recent BayToday.ca post, Shawn Flindall, director of marketing and communication with the North Bay Snowmobile Club, summed it up in a nutshell: “We actually need really cold weather before that snow blanket comes and insulates the ground. We have got to get lots of frost into the ground, we need swamps and waterways to freeze over. We need a lack of snow really when the cold weather comes and it looks like this week we are getting our share of cold nights but it is still early December and we need lots of cold weather before the snow comes.” 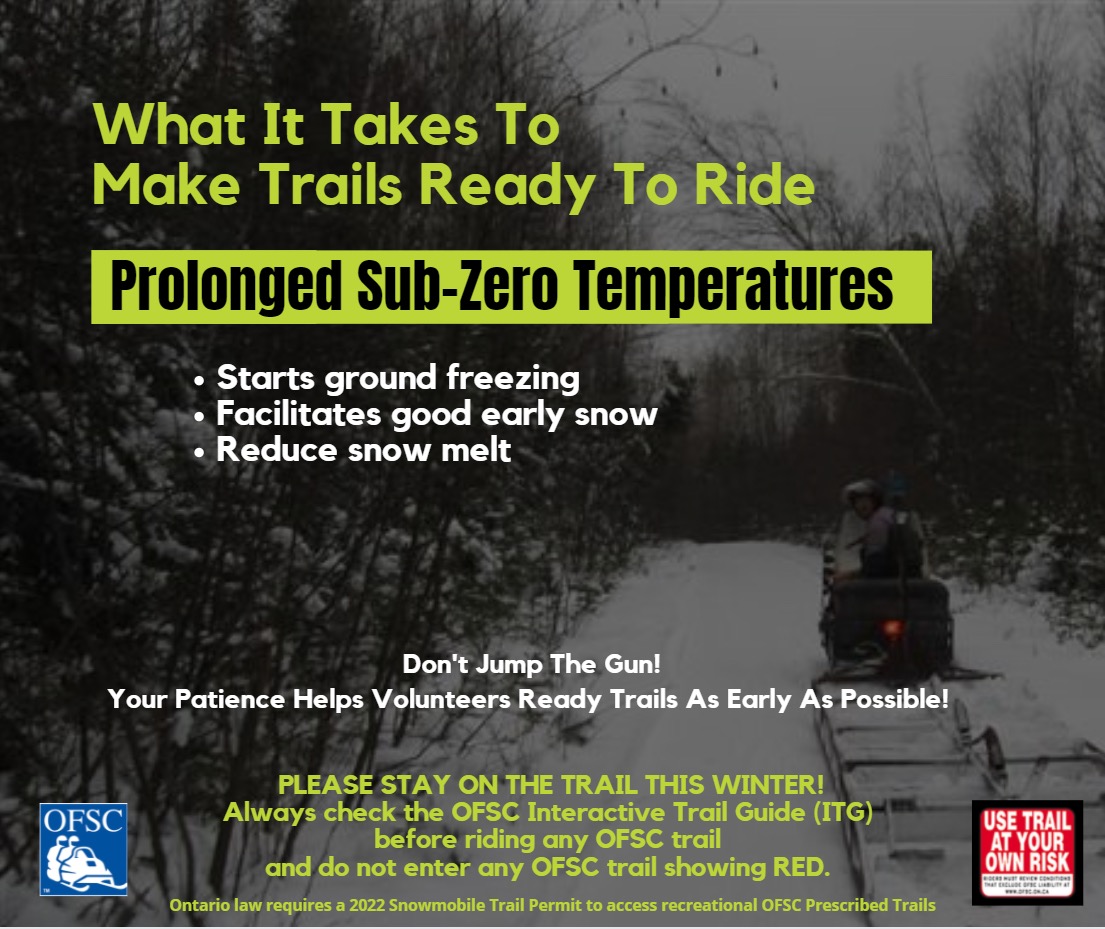 Some far northern places like Ontario’s Northern Corridor or Quebec’s Monts Valin may get early snow that actually heralds a real start to their winter. But unlike other regions of these provinces, their early snow is typically accompanied by consistently sub-zero temperatures.

For example, according to Environment Canada, early December in Cochrane has a historical average high of -6.2˚C and a low of -16.3˚C. Whereas the average of day and night time temperatures this week in Muskoka is a barely freezing -0.73˚C, with both rain and wet flurries in the forecast. Other popular Ontario snowmobile destinations like Owen Sound, Bancroft and Pembroke have more pluses than minuses this week. Not exactly great early snow accumulation temperatures. And next week’s not looking much better.

So where do you think that early snow is most likely to last? Certainly not in Southern Ontario. But even with early snow and cold, the Northern Corridor trails aren’t typically able to get fully up and running until at or just after Christmas. Why? Because it takes that long for the major rivers to freeze solid enough for safe crossings. Sure, some waterless trails will be ready sooner. But the whole network takes longer to be ready.

As Findall says about the north. “Although we use a lot of logging roads up here it is water everywhere in northern Ontario so we can’t underestimate the fact that waterways have not even come close to freezing let alone solid enough to hold a person, sled or vehicle so it is really a time for caution for sure.”

Monts Valin usually gets a head start. Basically it has no major rivers to await freezing. And even parts of Quebec like the Laurentians around Saint-Michel-des-Saints often squeak by into pre-Christmas trail riding. Why? Because their higher elevation, combined with being positioned about as far north as Sudbury or North Bay, can deliver early snow and cold that lasts. 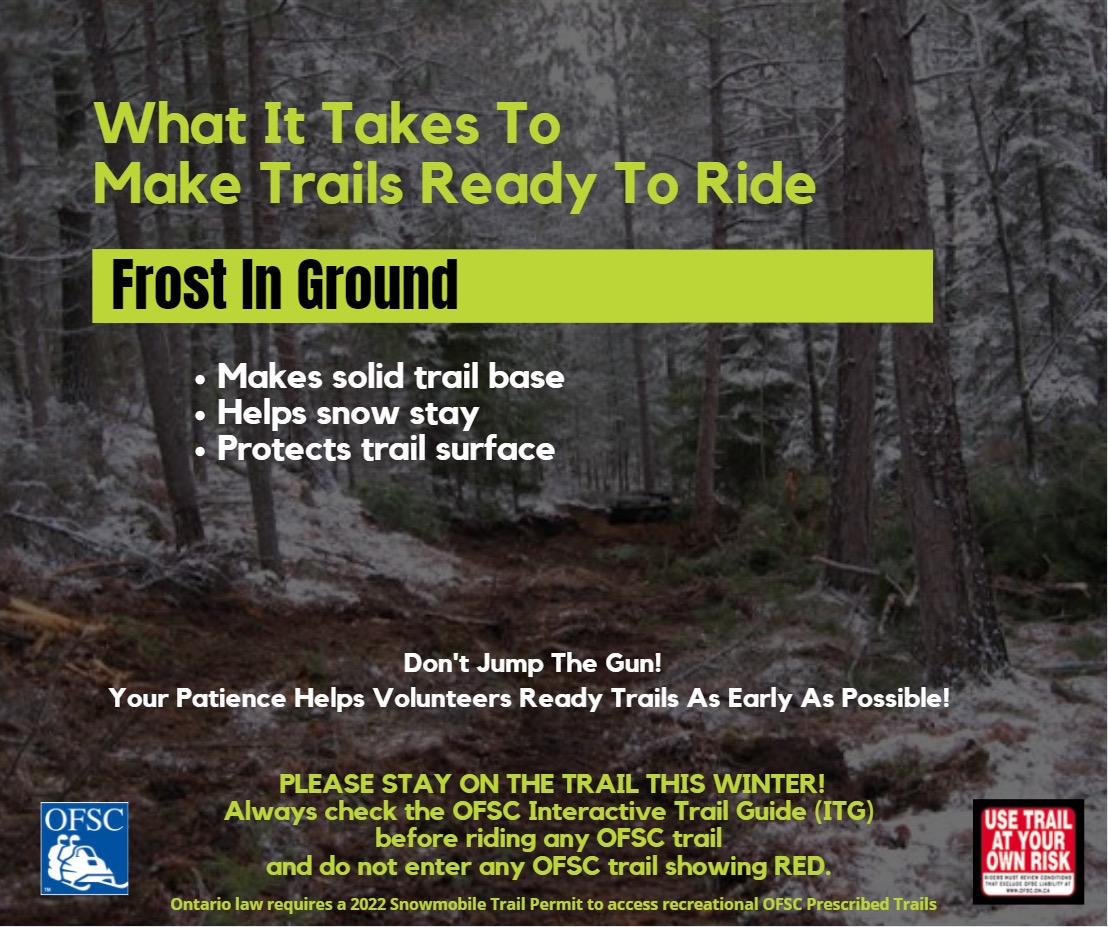 Don’t Be An Early Snow Fool

But most of us need to take a deep breath. Keep our sleds parked for a while longer. No one’s deliberately trying to delay making trails available to ride. It’s just that no one can control or rush Old Man Winter. That’s never worked before, so don’t fool yourself into thinking we can make it happen now.

Are you wondering what needs to happen before we’re good to go? Check out the common sense info graphics from the OFSC in this post. When you fully appreciate What It Takes before trails are ready to ride, it may be less painful to cool your jets about this early snow. And wait just while longer for the real thing! 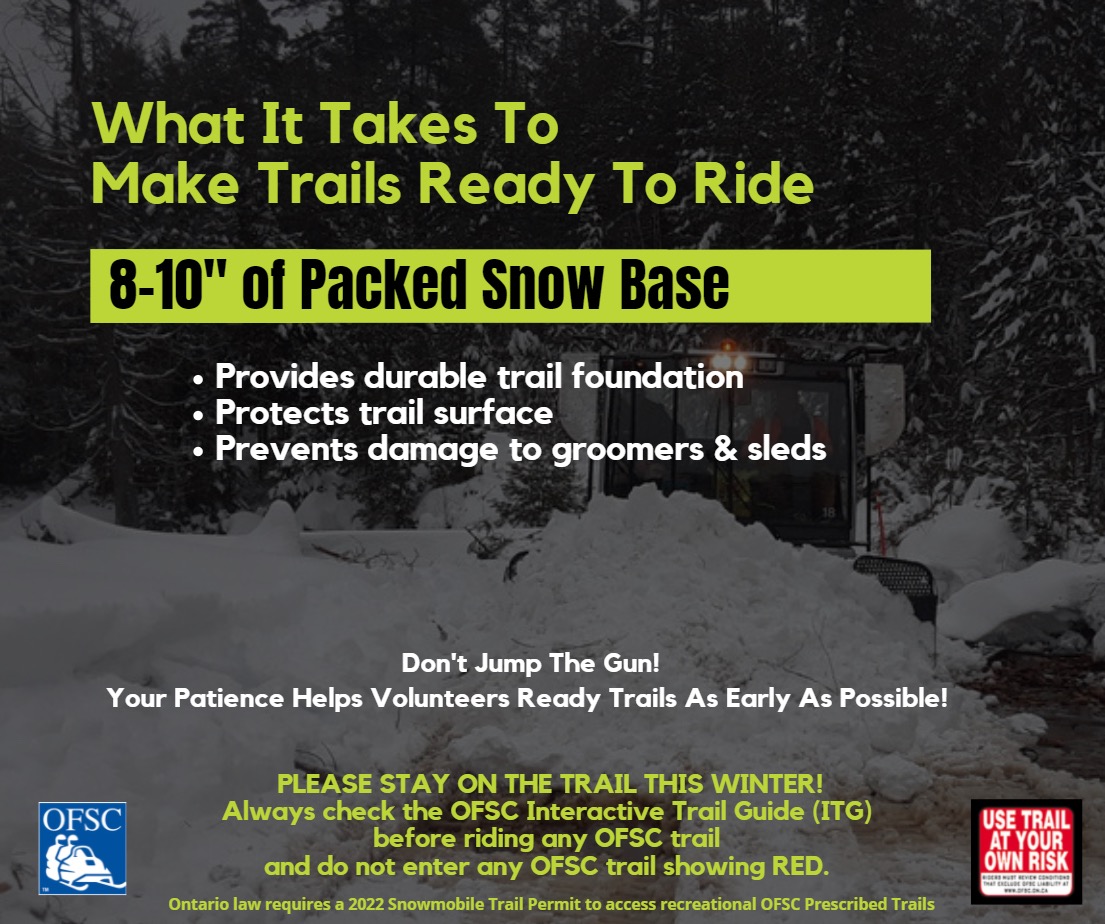