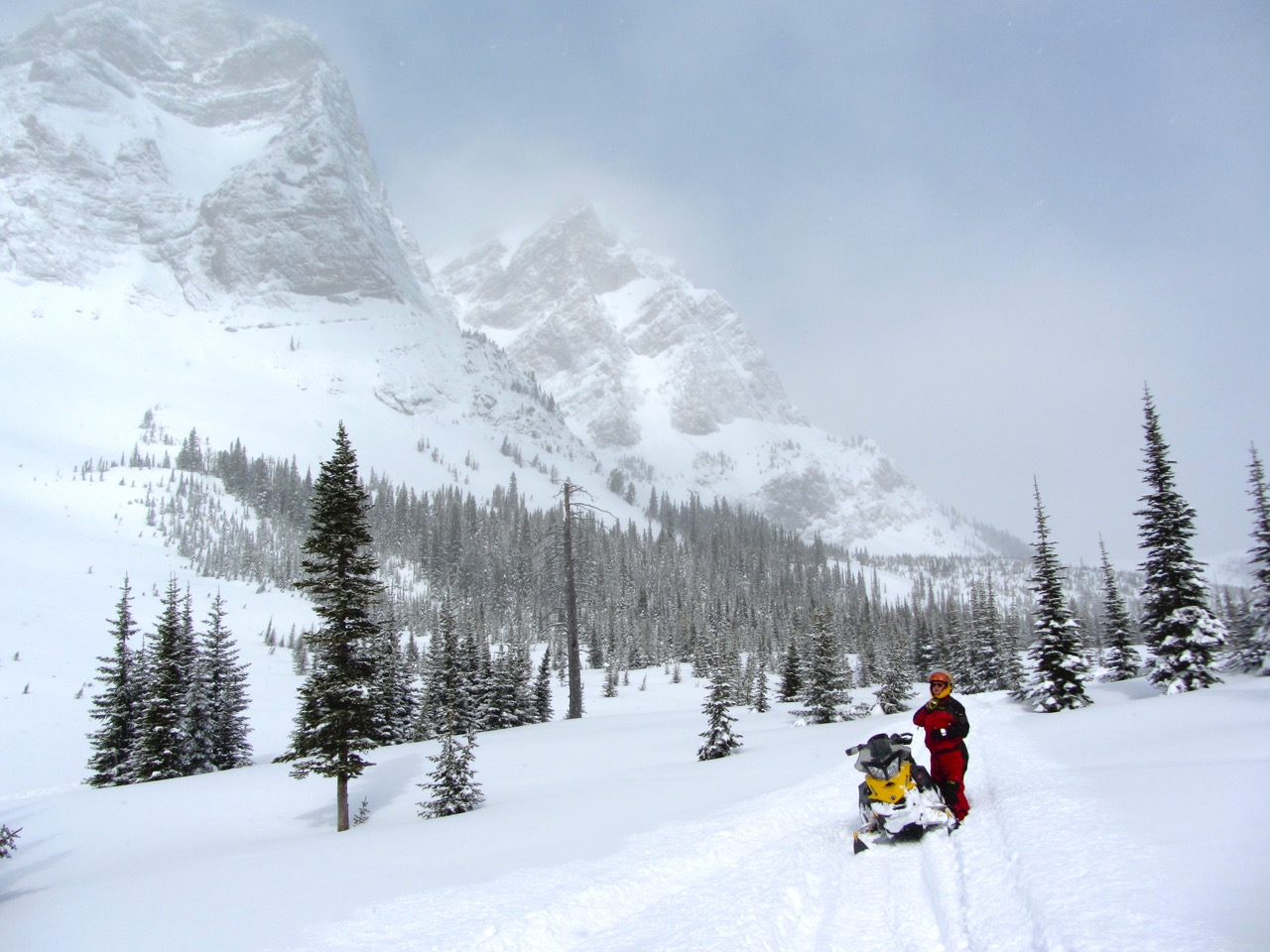 Getting ready to climb at Crowsnest Pass, Alberta. Photo © by Craig Nicholson.

Most avid sledders have a self-imposed snowmobile bucket list somewhere in the back of their minds. Over the years, our intention is to move rides from that list into “been there, done that” memories.

For many, it’s not easy to cross anything off that snowmobile bucket list. Real life choices, responsibilities and whims of fate often get in the way. As do weather, finances, time constraints, and yes, even prolonged pandemics. But a few of us are fortunate to have converted a whack of snowmobile bucket list rides to “been there, done that’s”. 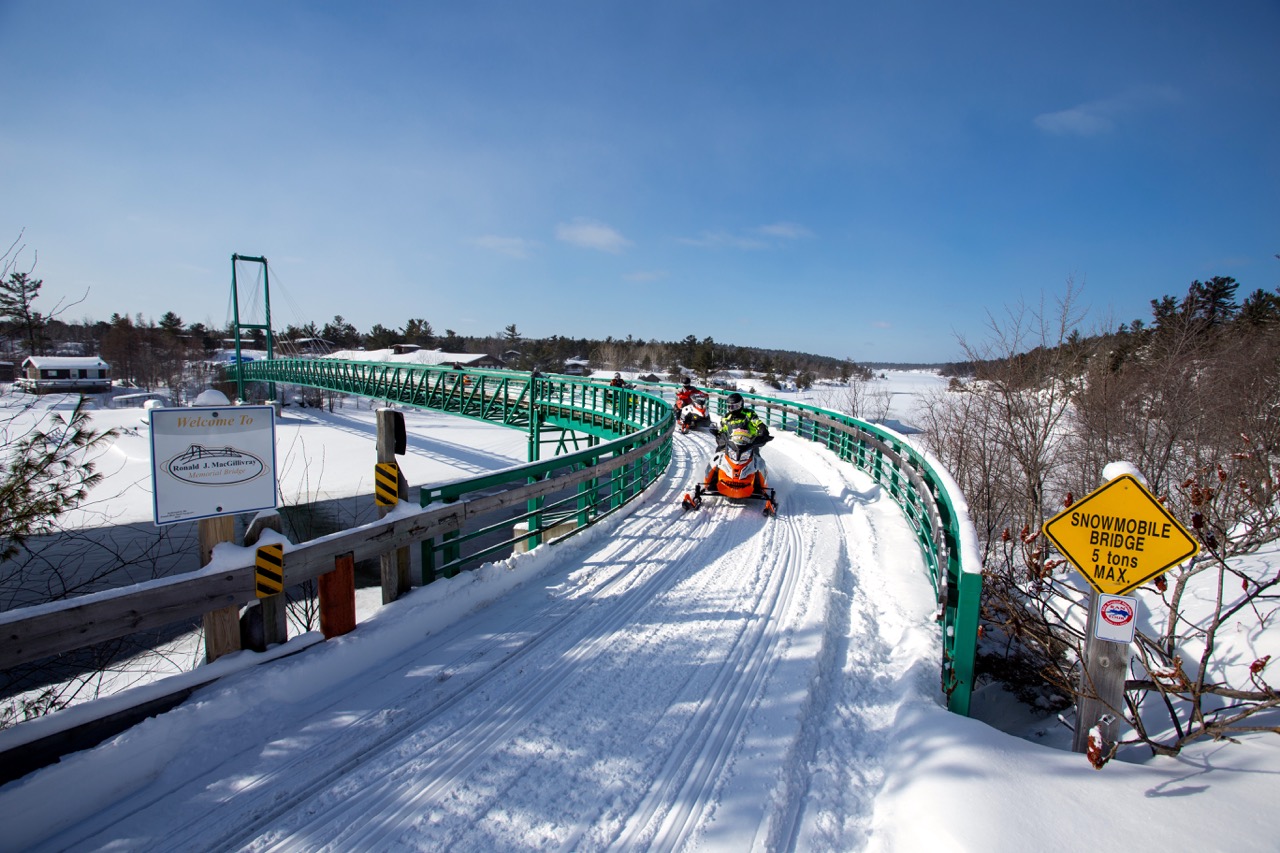 As a powersports journalist, I’m one of the lucky ones. My job includes touring every winter. I chronicle my experiences and observations for snowmobile magazine articles, sledding websites and tourism blogs.

Except for the past two pandemic years of uncertainty, my entire winter is typically planned by late fall. Back-to-back snowmobile tours on my Ski-Doo snowmobiler fill my schedule from January well into March. I get only home for a day or two a week to do my laundry and give the dog a rub!

I’m not complaining. I call it “getting paid to play.” As a married man, I’m also blessed with a spouse who’s eager to go snowmobiling with me at the drop of a helmet. I call it having a wife with fringe benefits! 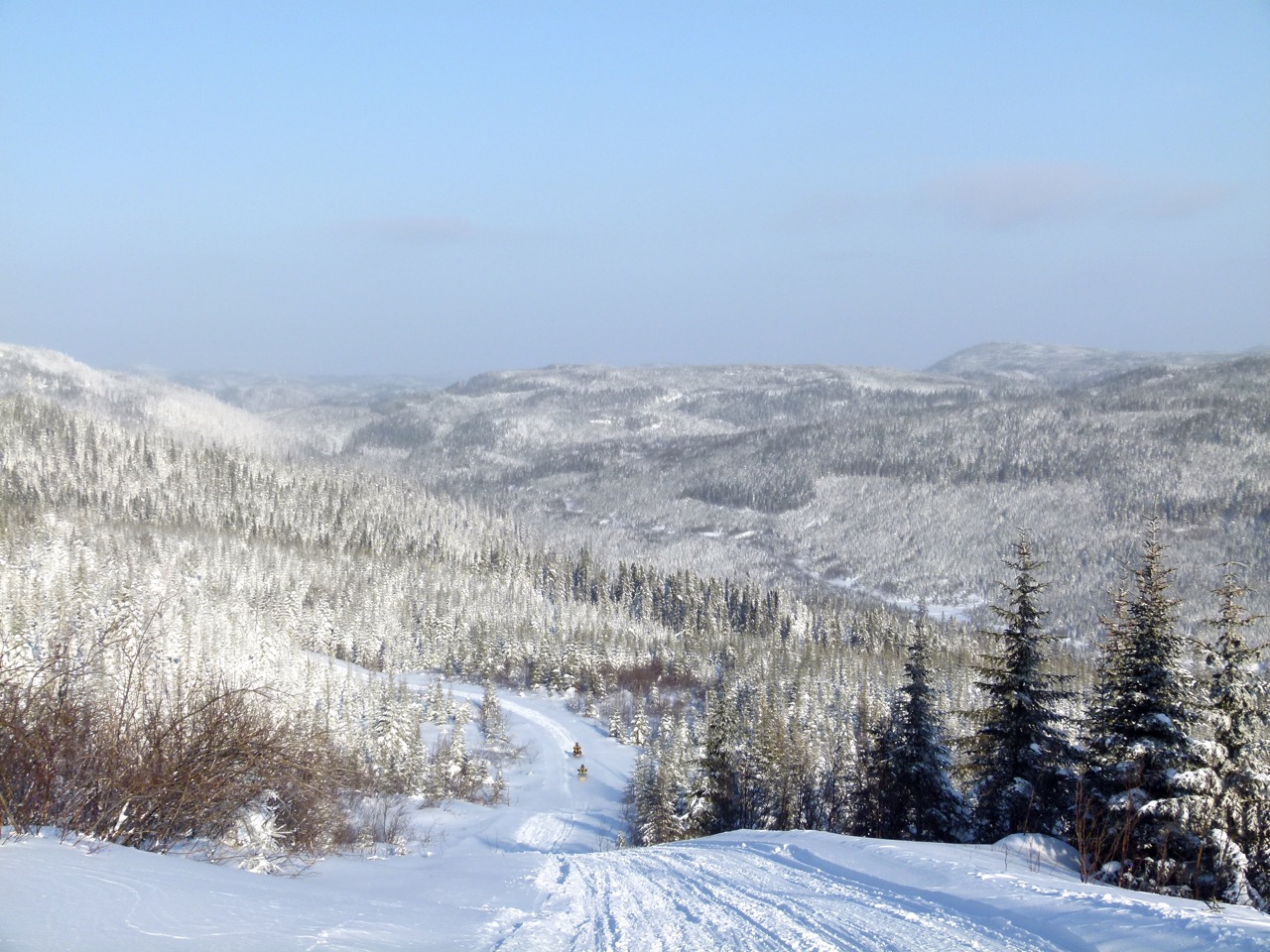 Sledding through the majesty of Monts Valin, Quebec. Photo © by Craig Nicholson.

I’ll be the first to admit that all the rides on my snowmobile bucket list weren’t my idea. Some were brain-child assignments from the ardent editors. Canadian publications looking for stories about epic rides in our homeland. But I’ve also contributed my fair share to the list. Often, I’ve returned on my own volition to revisit my most incredible adventures in every Canadian province and several American states.

Here are some of my most memorable snowmobile bucket list adventures. They’re published in my sold-out tour book, “Canada’s Best Snowmobiling” or posted on my Intrepid Snowmobiler website. 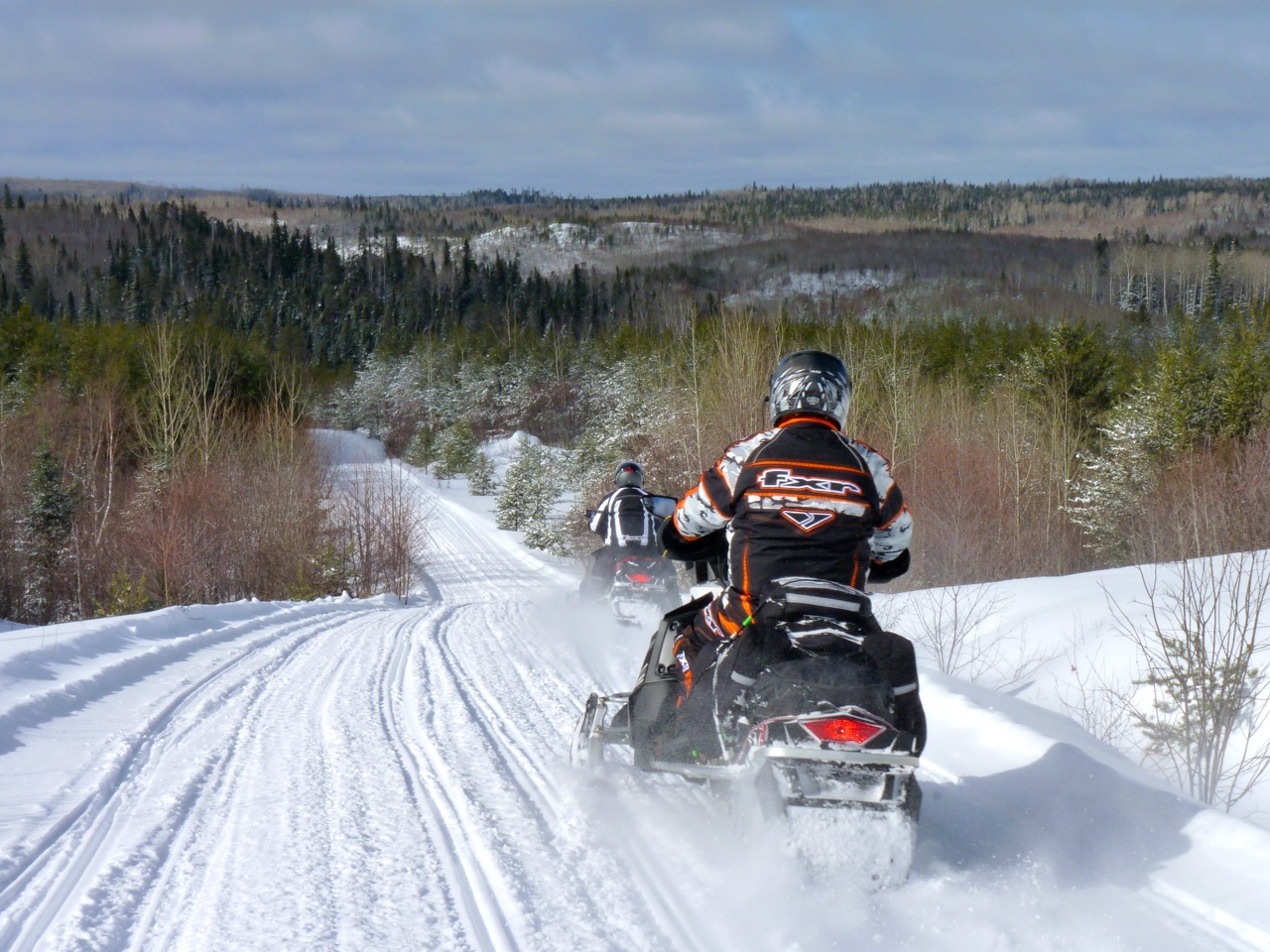 Popularly known as the “Ride Around Superior”, I rode the now defunct, cross-border Can-Am Loop. It was a 3,500 km circle tour around the largest of the Great Lakes. The ride took in parts of Northern Ontario, Minnesota, Wisconsin and Michigan’s Upper Peninsula. 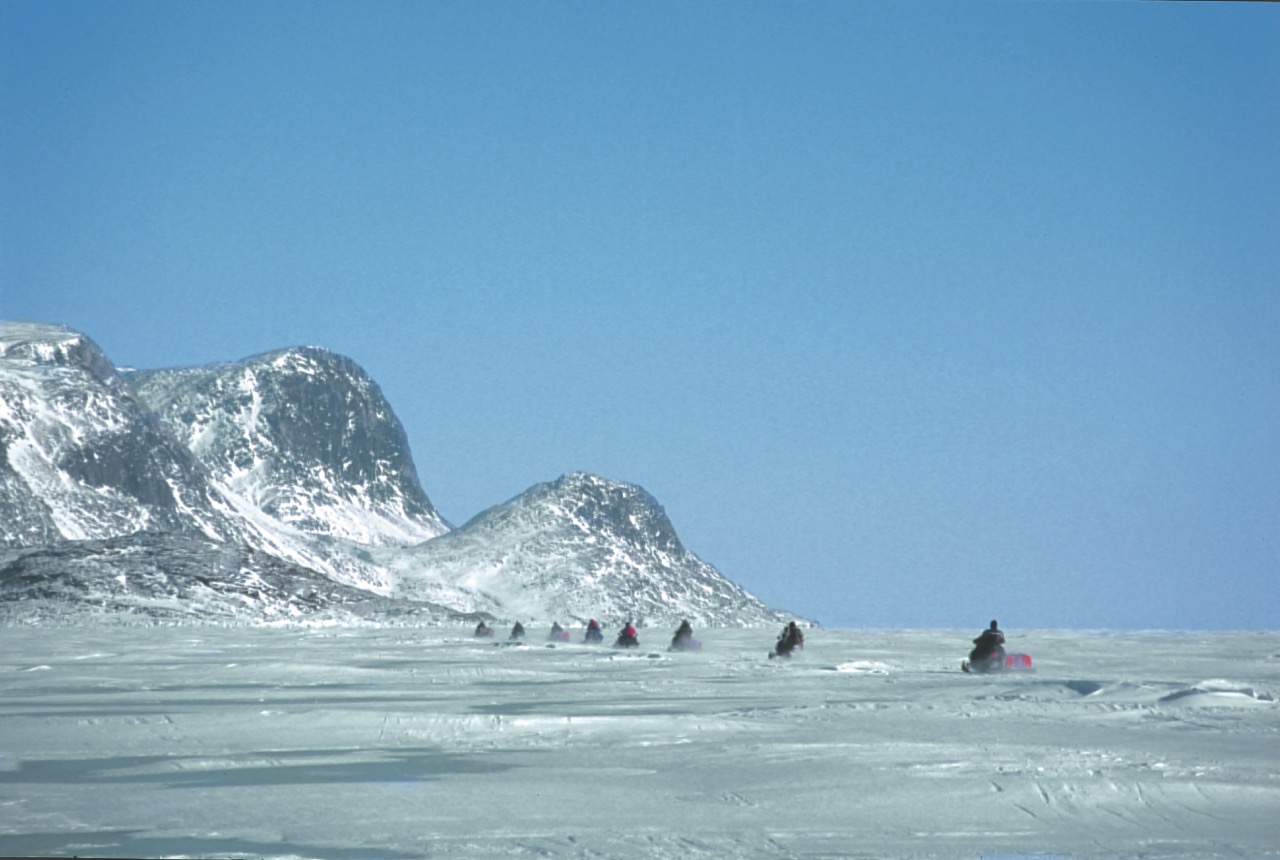 Rifles strapped on riders’ backs is standard equipment in the Arctic. Photo © by Craig Nicholson.

My sledding expedition to Nunavut took me to the Arctic Circle through some of the harshest, cross-country terrain imaginable. And a freezing-my-butt-off winter camping experience that I’ll never repeat, thank you very much!

I’d always wondered what’s north of Cochrane and the Abitibi Canyon. So on this backcountry wilderness adventure, I rode to Moosonee on the shore of James Bay to find out.

Riding the Great Northern Peninsula was a mix of groomed trails and backcountry. It showcased the rugged majesty of Western Newfoundland. 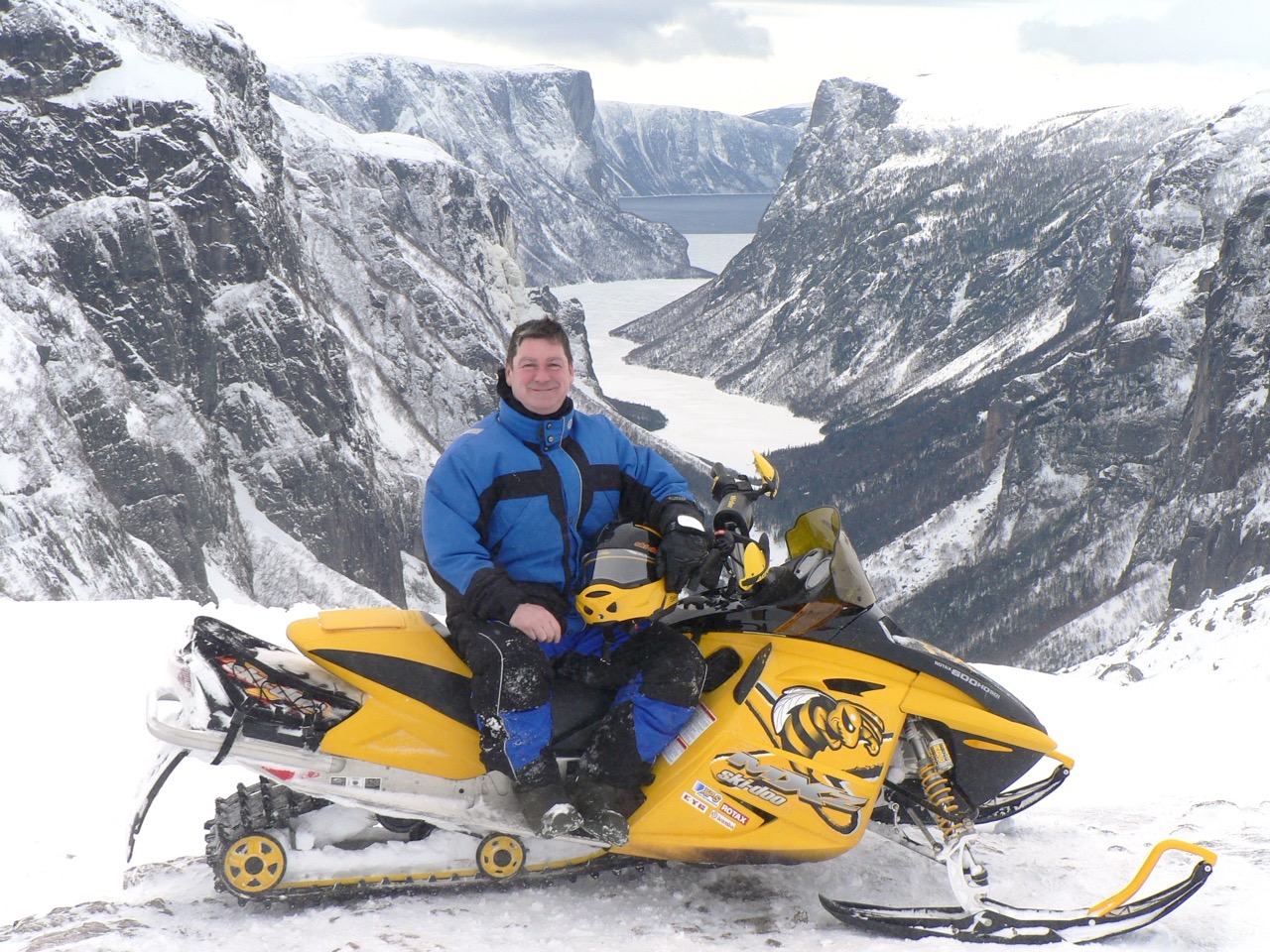 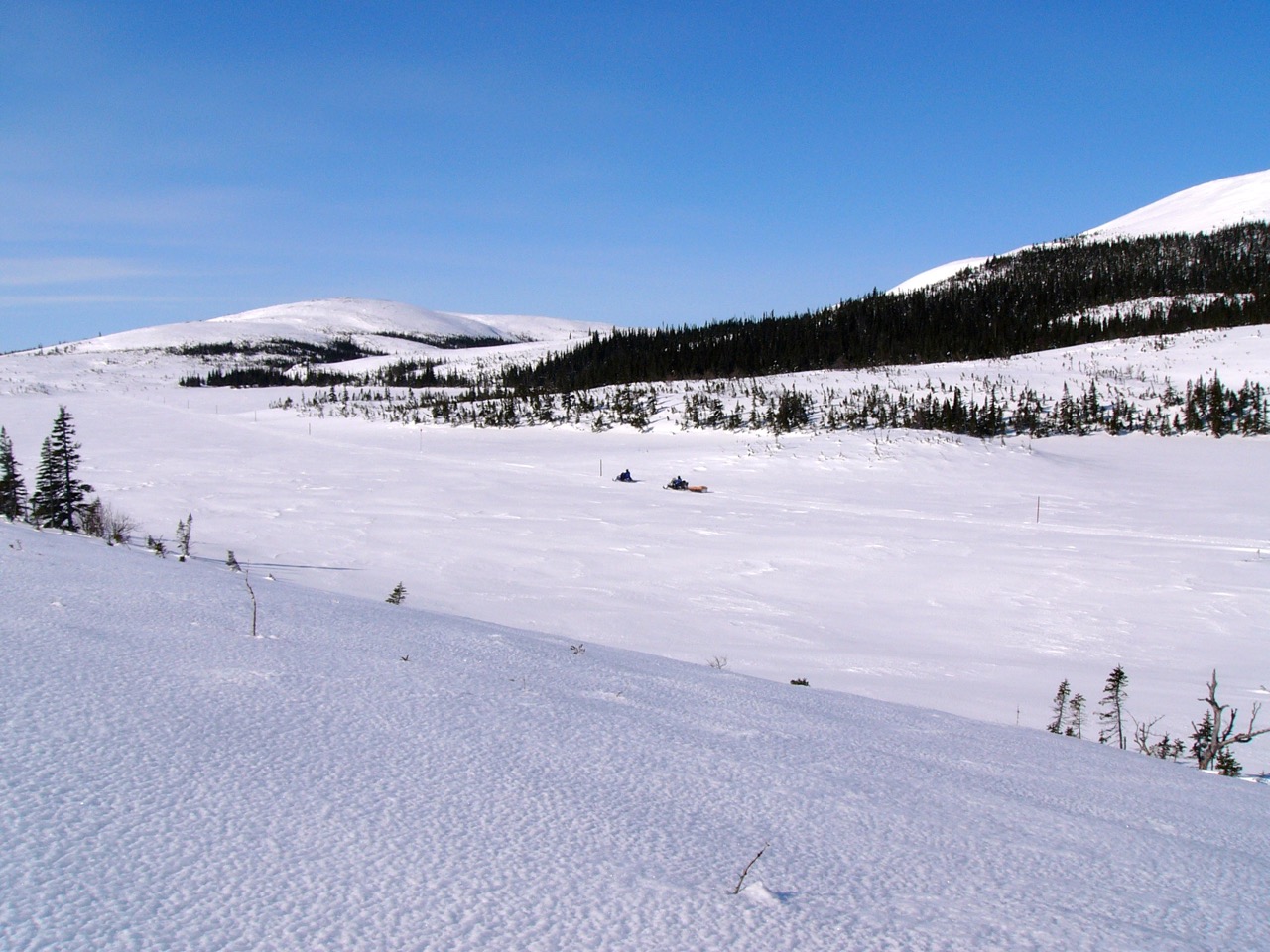 Lots of wide open country for sledding throughout Labrador. Photo © by Craig Nicholson.

The first of many mountain riding excursions staged from the Whistler/Blackcomb area to sled on both sides of British Columbia’s Coast Mountains. Others in B.C. have included Revelstoke, Valemount, Golden and Kelowna. 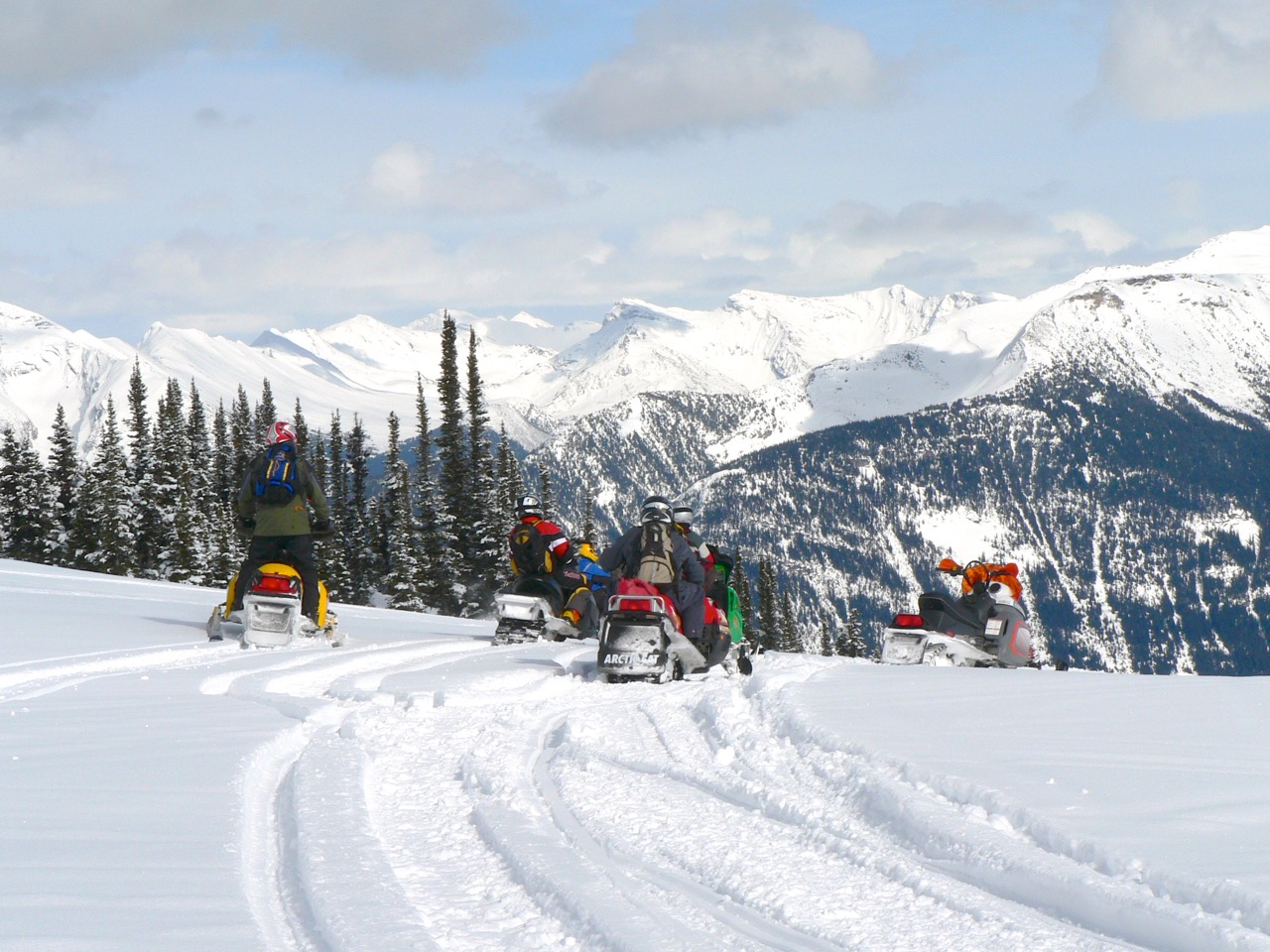 Along the way, I’ve also snowmobiled in Quebec’s Gaspésie & Monts Valin. And in Cape Breton Nova Scotia. I’ve also done New Brunswick’s Northern Odyssey, the RAP Tour, (and most other Ontario Snow Tours). Even the now defunct Superior Challenge Loop. I’ve also visited Crowsnest Pass, Alberta and West Yellowstone, Montana. Each of them has a unique combination of trail riding and mountain adventures. 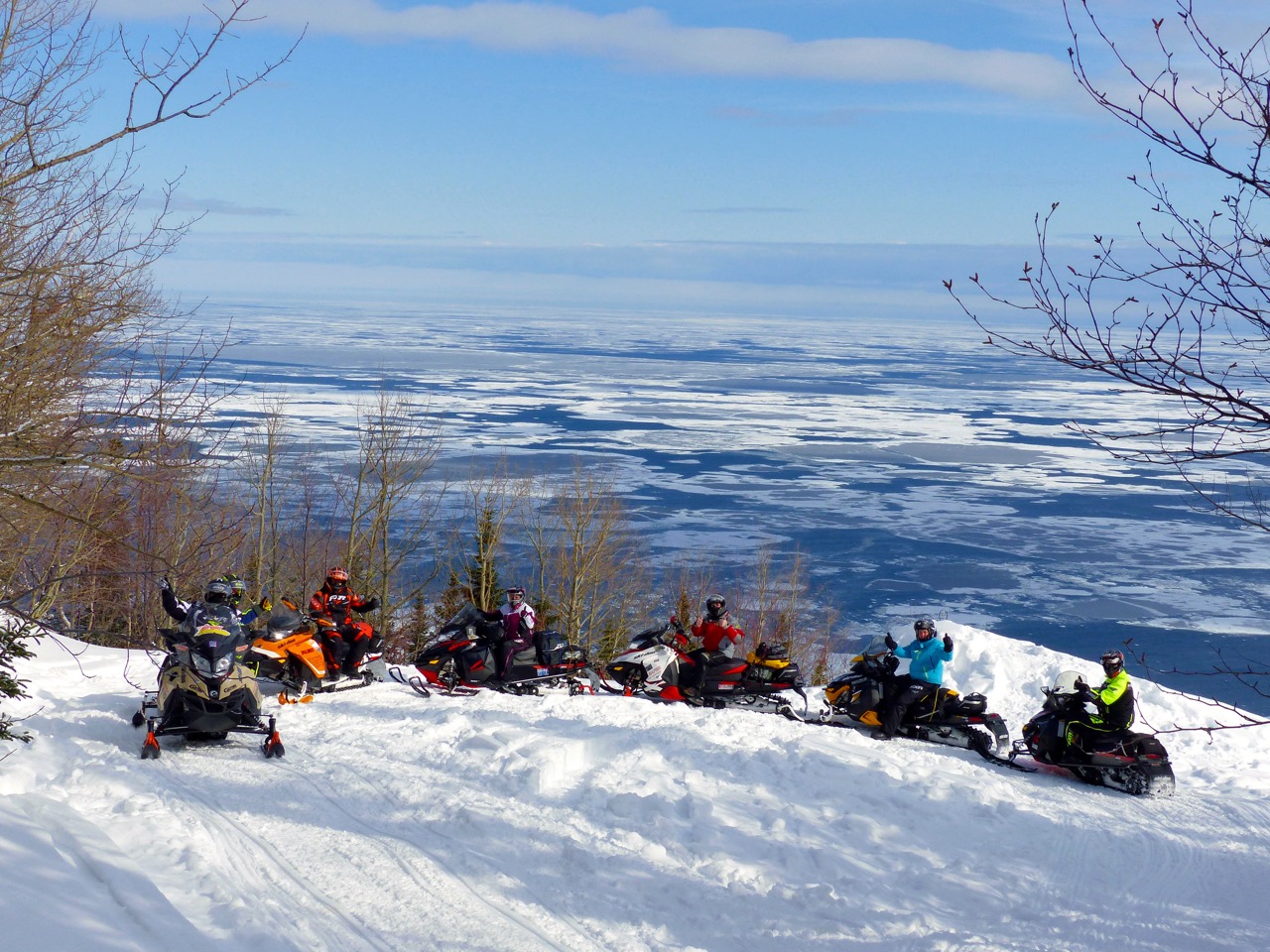 Panoramic lookout over the Gulf of St. Lawrence along Gaspésie’s northern coast in Quebec. Photo © by Craig Nicholson.

Shortest Day Ride: 0 km. My trailer broke down before we could unload the sleds!

Most Kilometres: 15,001 km in a winter that started strong in December and kept going into early April. 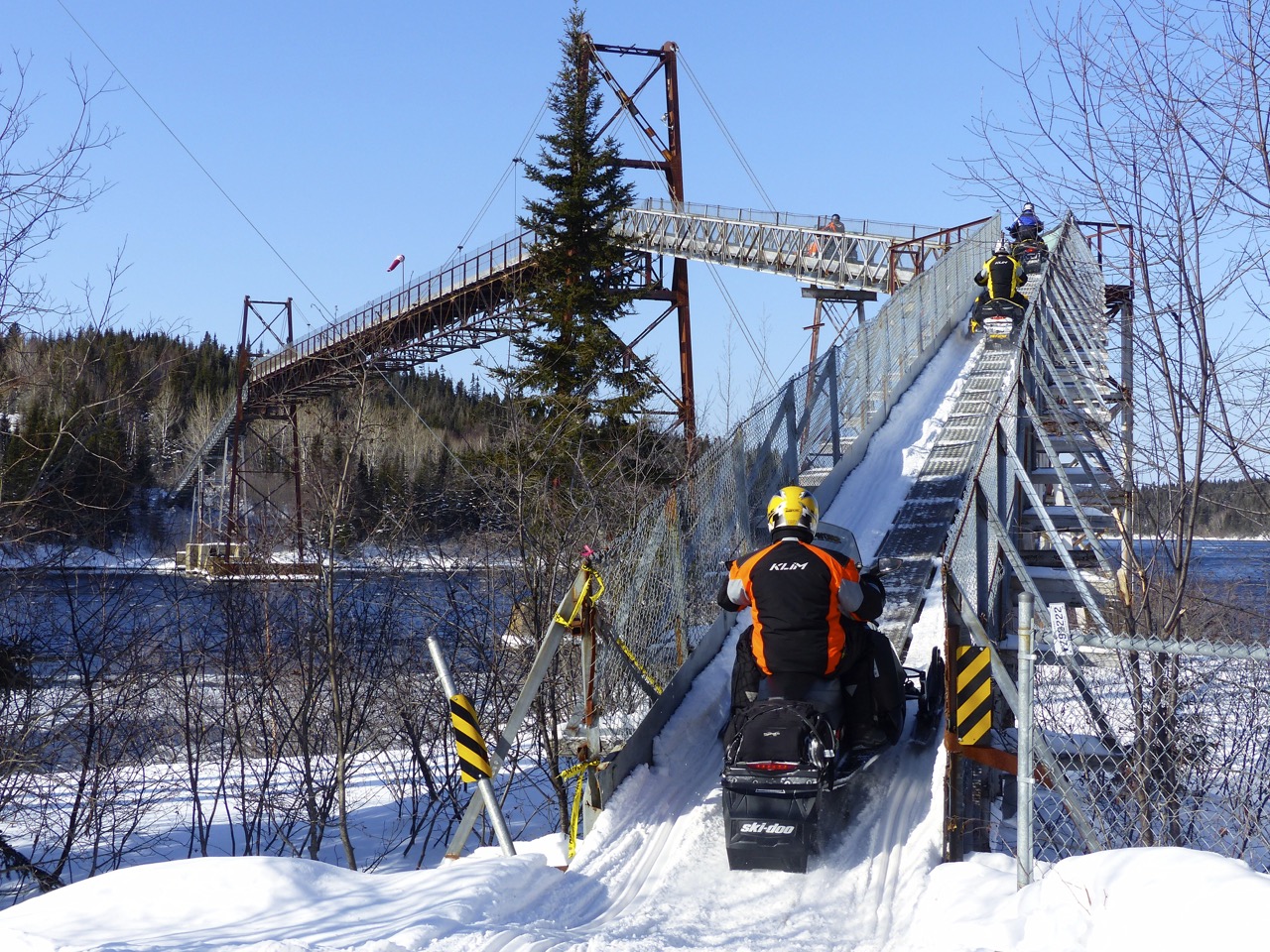 Crossing the purpose-built snowmobile bridge over the Manicouagan River in Cote-Nord, Quebec. Photo © by Craig Nicholson.

One of the most frequently asked questions I get is: “What’s your favourite place to ride?” I can’t speak to the destinations remaining on my snowmobile bucket list. But I can say that wherever I’m riding at the moment is always my favourite. After all, having fun and enjoying each ride is the name of the game! I may have “been there, done that” frequently, but each time is a new experience. And that’s what snowmobiling is all about, isn’t it? 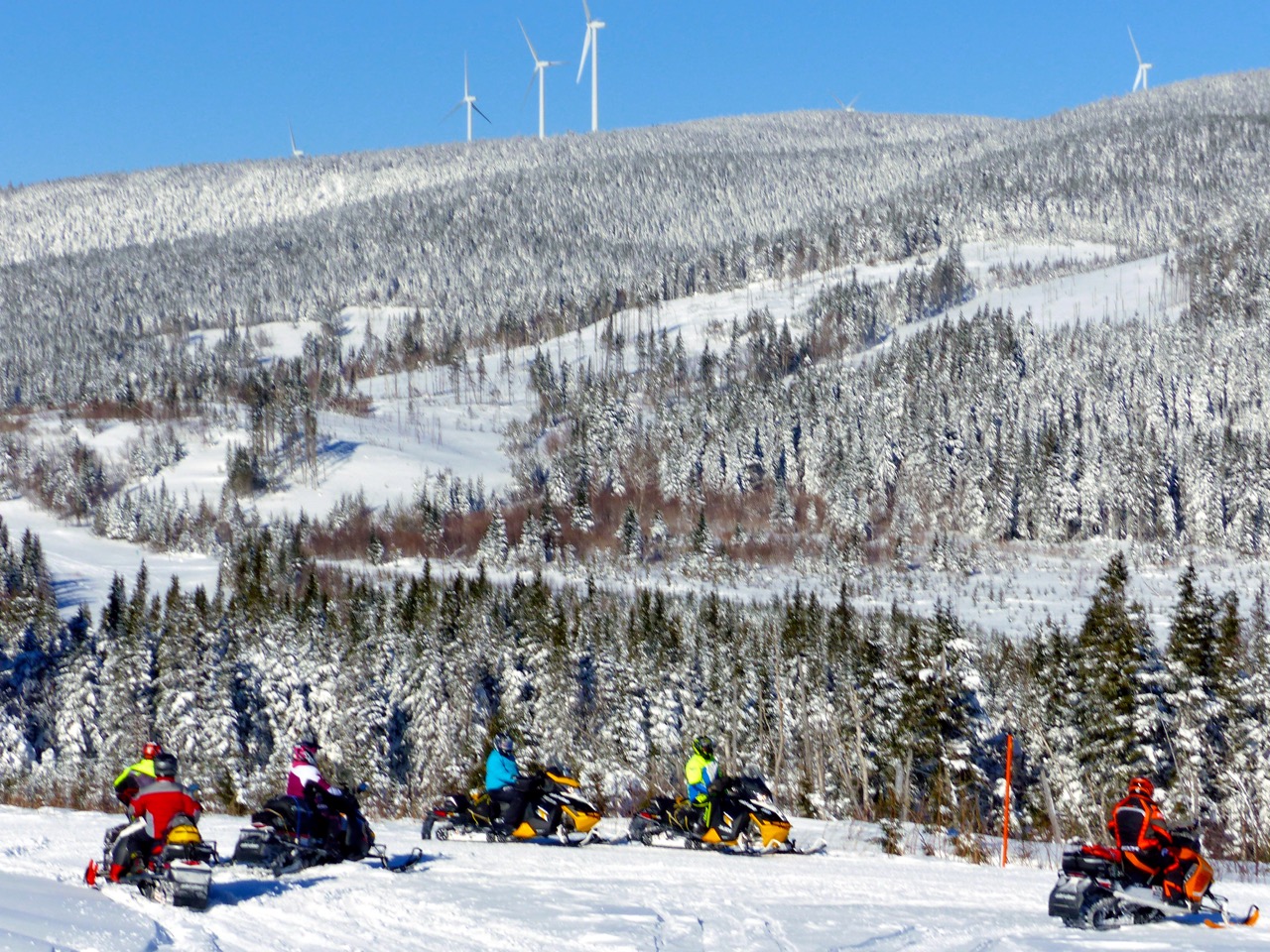